Most device physicists and engineers would agree that a native-substrate approach is the natural course for optimal semiconductor device fabrication and performance, since it guarantees atomic-level lattice and thermal-expansion matching as well as processing compatibility. However, for certain semiconductor materials, such as gallium nitride (GaN), this approach is not a straightforward option because the crystal is not readily found in nature and cannot be grown from the melt owing to the high vapor pressure of nitrogen. So, it was a big (Nobel-Prize winning!) achievement when researchers in Japan discovered how to synthesize GaN on foreign materials such as sapphire.1 This enabled GaN materials to be processed as conventional semiconductors, and led to the first wave of GaN-based LED products, even though the poor atomic crystal-lattice match between GaN and sapphire causes fairly high (about 108–109cm−2) defect densities (threading dislocations) in the GaN layers.

Eventually, a need for much lower defect densities for reliable laser diodes drove the development of ‘quasi-bulk’ GaN substrates, in which thick layers of GaN are grown on foreign substrates (including sapphire) by fast-growth techniques such as hydride vapor phase epitaxy. The thickness ensured a suitable level of defect annihilation in the upper layers of the ‘boule,’ providing a path—albeit an expensive one—for manufacturing GaN substrates with defect densities lower than 107cm−2 to support the blu-ray laser diode industry. Indeed, at roughly 100-times the price of materials such as sapphire or silicon, native GaN substrates were not considered by most as viable for the cost-conscious LED industry, the future base of lighting. However, this notion ignored two fundamentally important advantages of such an approach: first, higher current density operation, and second, high violet-emitting LED efficiency.

We proved that ‘GaN-on-GaN’ technology is a viable and unique approach to solid-state lighting applications, delivering, for example, the world's first true single-beam 50W replacement MR16 tungsten-halogen lamp. The high-current-density advantages of GaN-on-GaN were enabled not only by the low defect density of the device active layers, but also by the GaN substrate in the chip design as a light extractor, thermal leveler, and current leveler. At Soraa, we have carefully measured light extraction efficiency for state-of-the-art triangular-shaped GaN-on-GaN LED chips—see Figure 1—at 90%, the highest reported in the industry. Operable current densities are up to 200A/cm2 with complete power density uniformity, which is about ten times the operating power densities of LEDs based on foreign substrates (see Figure 2).2 In addition, low crystal defect densities enable very efficient light generation in the violet (400–440nm) wavelength range (see Figure 3). Thus, GaN-on-GaN LEDs are the basis for not only the brightest (lowest etendue) but also true full-visible-spectrum LED-based light sources. 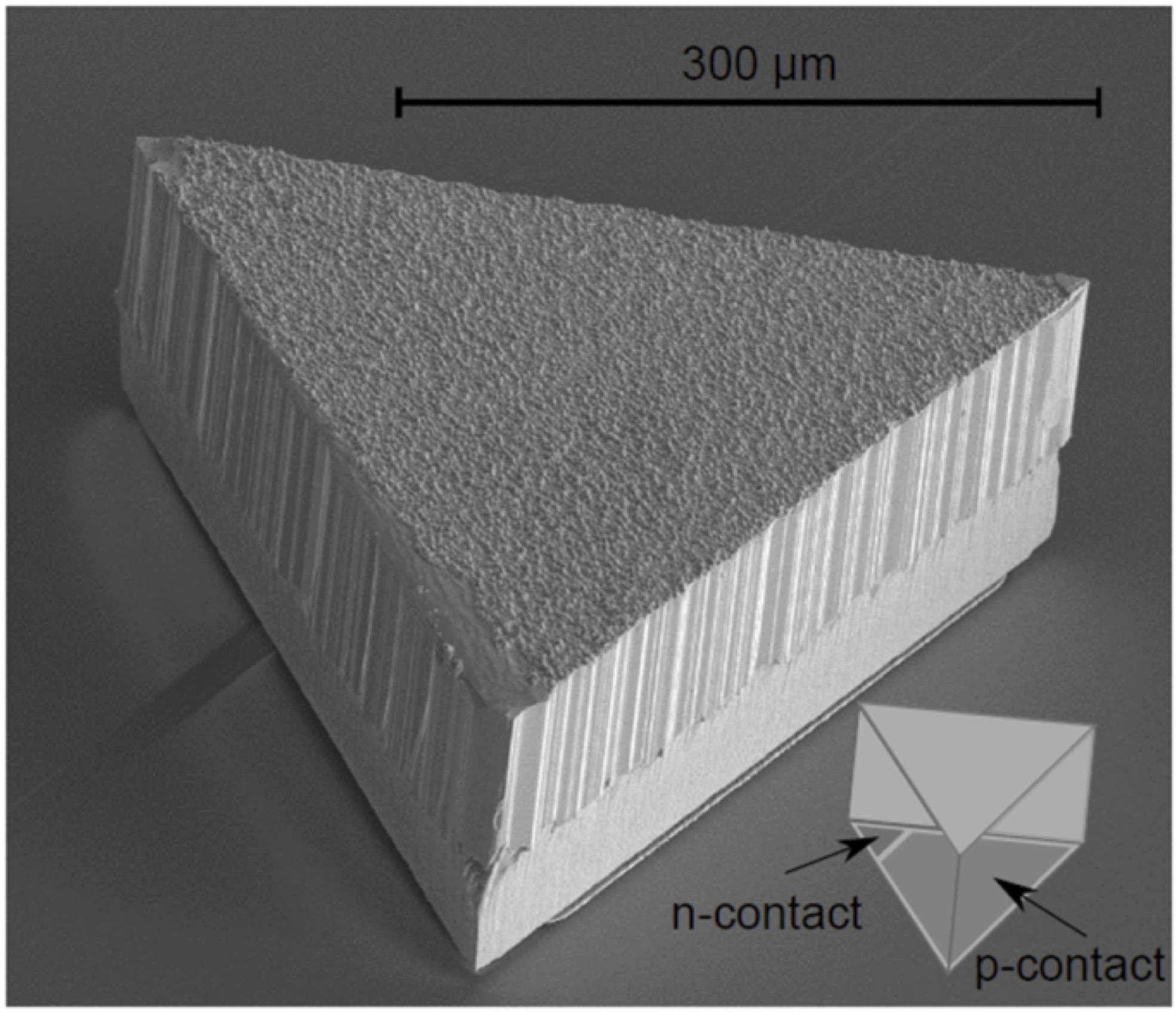 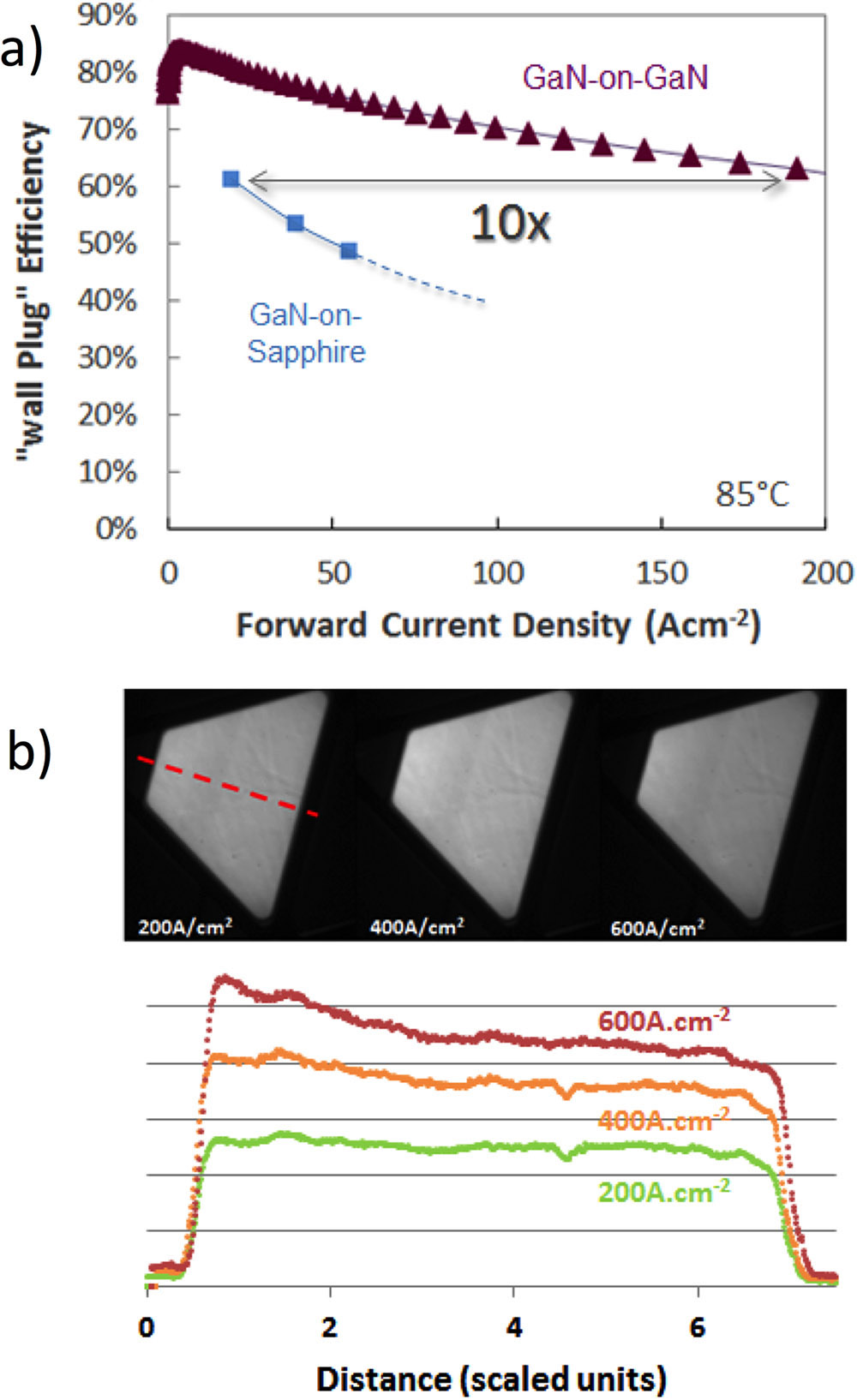 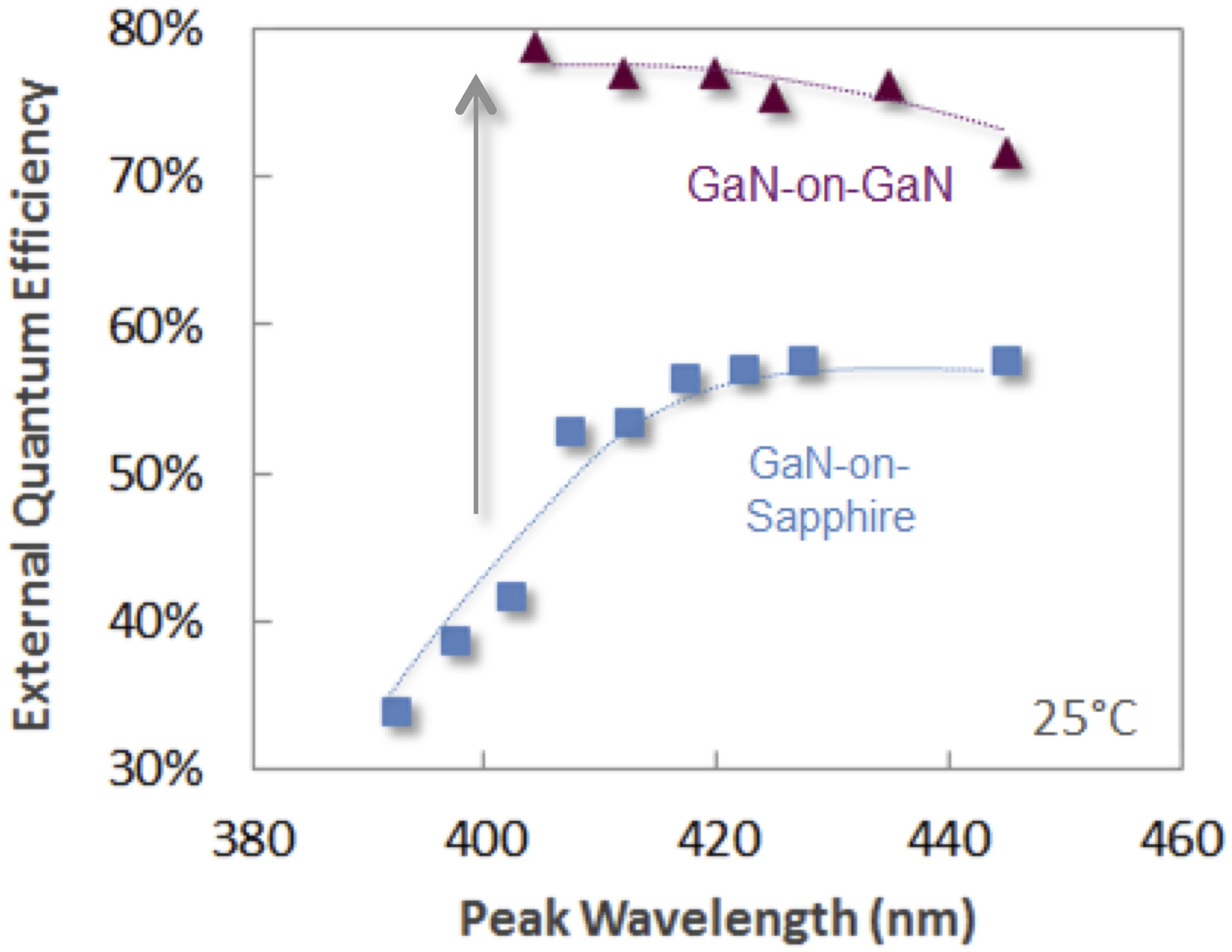 Figure 3. Efficiency versus wavelength for GaN-on-GaN compared to conventional LEDs.

At Soraa, we use the violet (∼3.0eV) primary emission combined with blue-, green-, and red-emitting phosphors (that absorb the emission and re-emit it at a longer wavelength) to make GaN-on-GaN LEDs with a color rendering index (Ra) of 95 and deep-red color rendering index (R9) of 95. This was a first for the industry when they were introduced in 2012: an LED source with a quality of light comparable to halogen, but without the unwanted IR (heat) and UV emission. In comparison, a typical blue-based LED targets an Ra of 80 and R9 of 0. Moreover, in illumination applications some short-wavelength emission is necessary for invoking fluorescence in many natural and man-made white materials, such as fabrics, paper, plastics, and even human teeth. Using GaN-on-GaN, we were able to tune the level of violet emission to achieve this effect and directly match a reference illuminant, such as incandescent tungsten or tungsten-halogen. For standard blue-based LEDs, of course, the highest photon energy is blue (∼2.7eV), which is not capable of exciting blue-emitting fluorescent centers in typical optical brightening agents. White materials illuminated by blue-based white-emitting LEDs, therefore, look dull and dingy compared with their appearance under natural illuminants (i.e., sunlight, incandescence) or under violet-based GaN-on-GaN white LED illumination.3

GaN-on-GaN technology is now the basis for a wide range of available lighting products, including retrofits for the common standard reflector lamps as well as light engines and modules for incorporation into dedicated light fixtures, all of which benefit from the high brightness and full-visible-spectrum advantages.4 In addition, as GaN substrate prices continue to decline, this platform will rival and eventually supersede conventional LEDs for leadership in lumen-per-dollar because of the higher material efficiency from the chip level all the way to the luminaire level. My Soraa research colleagues and I are continuing to develop GaN-on-GaN technology to exploit these fundamental advantages to lead to smaller, more efficient, and higher-value sources for the lighting industry, with a focus on quality of light and, eventually, lighting for health.

Mike Krames received a PhD in electrical engineering from the University of Illinois at Urbana-Champaign. He formed the Advanced Laboratories for Philips Lumileds and, in 2009, joined the management team of Soraa. He has published more than 80 papers and been granted more than 100 patents worldwide.