The spontaneous emission (SE) rate represents a fundamental parameter governing the light emission process. Control over this rate can be achieved by shaping the vacuum field (the quantized electromagnetic field associated to the lowest possible energy in quantum theory) at the position of quantum emitters (e.g., atoms or quantum dots, QDs) within periodic dielectric structures.1, 2 Both the inhibition and acceleration of the SE rate have been demonstrated by applying a static or quasi-static change to the local density of optical states in photonic crystals (PhCs).3 However, the real-time manipulation of radiative processes creates another degree of freedom, essential for various applications in classical and quantum photonics. For instance, to achieve high efficiencies in quantum information systems based on photon exchange between semiconductor artificial atoms (e.g., QDs), photon emission and absorption rates must be controlled.4 Ultrafast control over the local density of optical states in PhCs, based on a local perturbation of the photonic bandgap structure via the transient injection of free carriers, was theoretically proposed one decade ago.5 Unfortunately, this technique leads to a simultaneous perturbation of the carrier population, thereby limiting its applicability.

We have proposed and demonstrated an ultrafast, non-local control scheme based on the coupling of a control cavity to a target cavity containing QD emitters.6 By injecting free carriers into the control cavity, the electric field distribution in the coupled-cavity system can be modified, resulting in the real-time shaping of the vacuum field in the target cavity. Using this method, the QD-cavity interaction and SE rates can be manipulated on a timescale of ∼200ps, well below the radiative lifetime. The coupled cavities are based on two double-heterostructure cavities—see Figure 1—which are defined by a slightly enlarged lattice constant (3%) along a single-line-defect PhC waveguide in two adjacent regions, resulting in two local defects. These defects trap light with a wavelength around 1550nm. The control cavity forms a Fabry-Perot (FP) cavity, which exhibits a periodic mode structure with relatively low Q-factors and high mode volume compared with the target cavity. When free carriers are injected into the control cavity by a short optical pulse, the FP modes are brought transiently in or out of resonance with the target cavity mode. This simultaneously changes the Q-factor and the mode volume of the coupled modes, and hence the SE rate of QDs located in the target cavity. 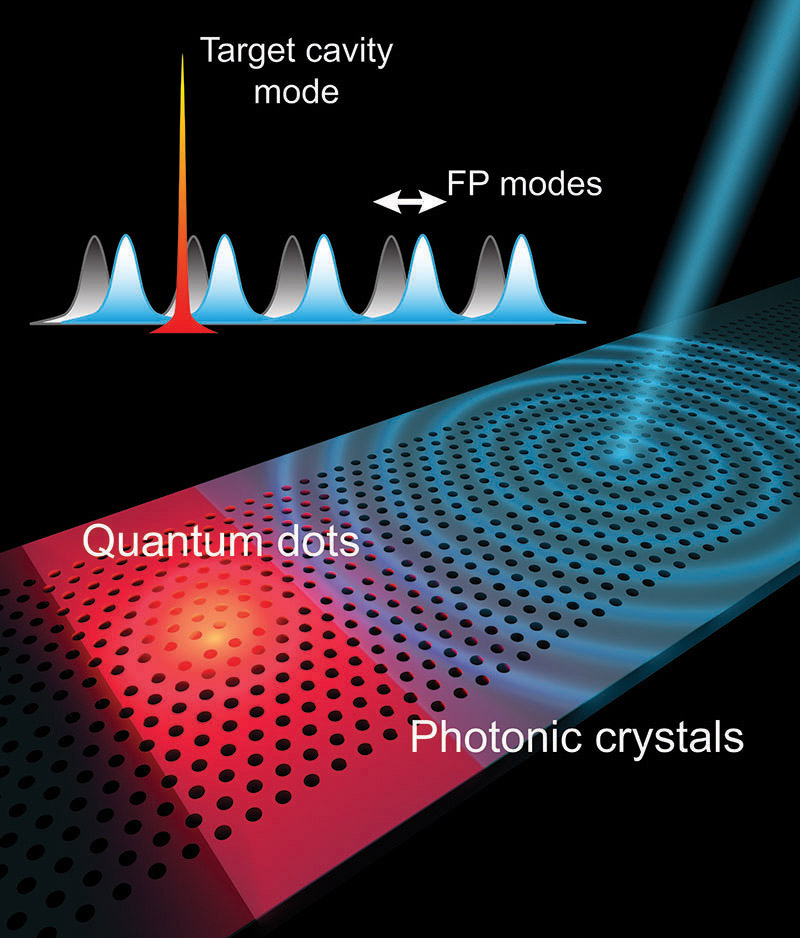 Figure 1. Non-local control scheme of the emitter-cavity interaction. The lattice constant in different regions along the photonic crystal (PhC) waveguide is modulated to define the target (red shaded area) and Fabry-Perot (FP) cavity (blue shaded area). The dynamic tuning of the FP cavity modes, in and out of the resonance with the target cavity mode, results in a redistribution of the mode field and a change of Q-factor, as shown in the upper left inset. (Illustration designed and prepared by Yan Liang, L2Molecule.com.)

Figure 2 shows the schematic structure of a two-beam micro-photoluminescence (μPL) setup. Two laser beams are focused onto the PhC sample. By tilting one of the laser beams slightly away from the optical axis of the objective lens (∼0.5°), the two laser beams can be focused at different positions (∼30μm apart). Using a superconducting single-photon detector working below 2.0K and a time-correlated single-photon counting method, we recorded the signal in the time domain during the time-resolved PL measurement. Our experimental results show that the SE rate can be transiently reduced or increased within a time interval of ∼200ps, depending on the initial detuning conditions. This can be seen in the spectrally and time-resolved μPL maps in Figure 3(a). Further experiments have demonstrated a large modification of the common exponential decay of the QD emission when the QDs are excited by a short pulse: see Figure 3(b). This modification can be controlled by varying either the initial detuning condition or the time delay between the two laser pulses (sent to the target and FP cavities, respectively). 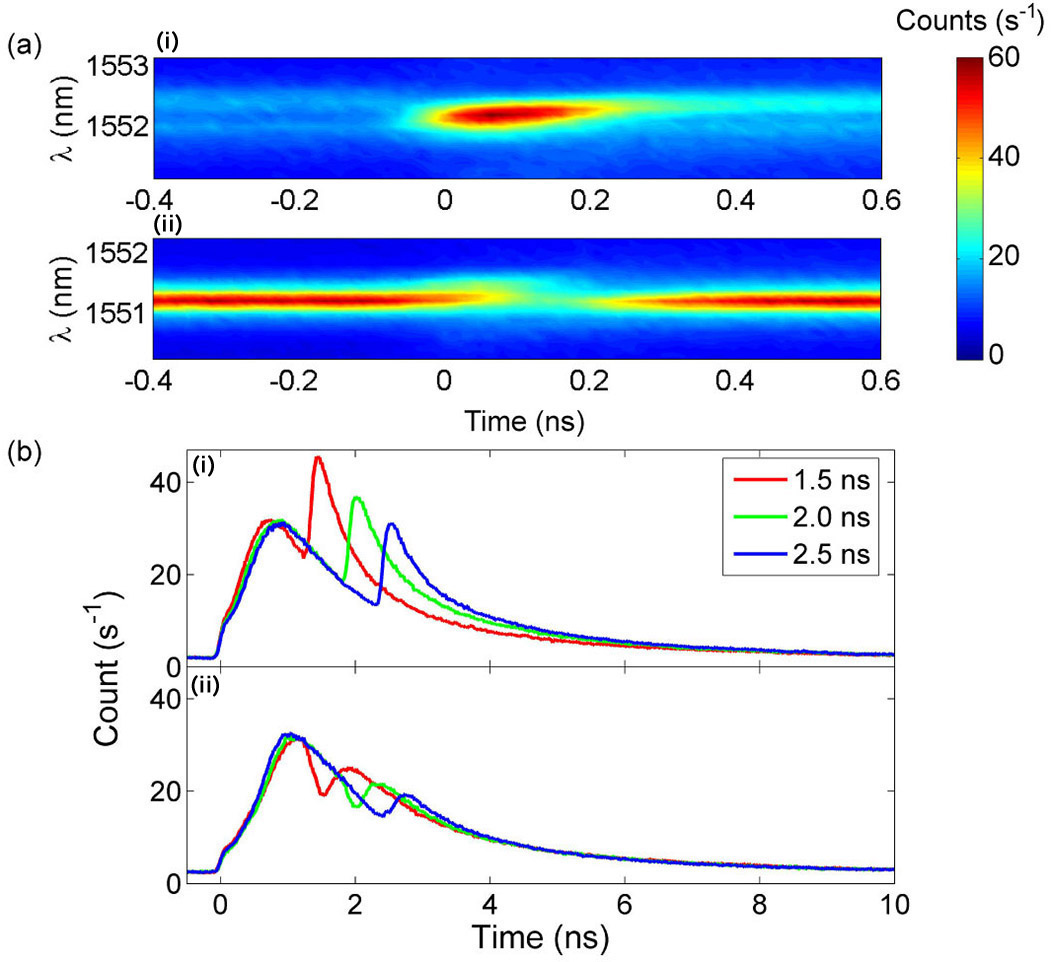 The key concept behind our scheme—using two coupled cavities to control the vacuum field—can be readily extended to multiple-cavity-coupling cases, therefore enabling a series of new functionalities. We have, for example, theoretically demonstrated the complete suppression of the vacuum field at the emitter's position by placing the target cavity between two identical control cavities.7 This enables the shaping of a single-photon waveform without frequency chirping. Additionally, the temporal resolution of our non-local control scheme is determined by the free carrier lifetime, which could potentially be accelerated to a few picoseconds by applying a reverse bias to the control cavity. This opens up various possibilities for the study of cavity quantum electrodynamics (cavity QED), ranging from the real-time modulation of single-photon waveforms to the on-off switching of Rabi oscillations, without directly disturbing the carrier population in the target cavity. As the cavity field also determines the stimulated emission rate in classical photonics, the same method could be implemented to develop ultrafast Q- and gain-switching techniques for semiconductor lasers.

In summary, we have developed an efficient means to mold the spatial distribution of the vacuum electromagnetic field and hence enable real-time control over the emitter-field interaction rate. This has profound implications for both fundamental and applied research. In future work, we hope to use the non-local control scheme to study dynamic properties of semiconductor-based cavity-QED systems, which could enable the development of novel quantum devices such as a single-photon waveform modulator or a quantum eraser. We also plan to investigate potential applications in the ultrafast modulation of nanophotonic devices, e.g., ultrafast laser sources or photonic switches on PhC platforms.8

Chao-Yuan Jin received his PhD in electronic and electrical engineering from the University of Sheffield, England. He is currently working at Eindhoven University of Technology. His main research activities focus on nanophotonic devices for optical signal and quantum information processing, including single-photon sources, optical switches, lasers, and nanophotonic integrated circuits.