Material properties change as a function of temperature, and cryogenic refrigeration allows us to obtain very useful properties not available at higher temperatures. For instance, in the temperature range 77–150K, superconductivity, long- and mid-wave IR detectors, and ultra-stable laser cavities become usable.1 Currently, these low temperatures are reached using liquid or solid cryogens or mechanical refrigerators. Unfortunately, liquids and solids require regular attention to refill after evaporating away, and mechanical refrigerators introduce vibrational noise and mechanically wear over time. Space-based applications, and ultra-stable laser cavities in particular, cannot tolerate these drawbacks. A solid-state solution is preferable for its inherent vibration-free operation and potentially long lifetime. Optical refrigeration via anti-Stokes fluorescence is currently the only solid-state cooling technology capable of reaching cryogenic temperatures.

In 1929 Peter Pringsheim first suggested using anti-Stokes fluorescence for cooling a sodium gas.2  However, it was 1995, after the invention of the laser and high-purity host materials, before net cooling was finally realized in a fluorozirconate glass doped with ytterbium (Yb), known as Yb3+:ZBLANP.3  Colleagues and we were able to enhance cooling performance further using a high-purity Yb-doped yttrium lithium fluoride (Yb3+:YLF) crystalline host, which shows higher absorption,4 and we were subsequently able to improve this system to attain the first cooling to a cryogenic (<123K) temperature of 119K.5  We have now identified a way to achieve 77K (the temperature of liquid nitrogen) by direct measurement of impurities.6

Cooling occurs when low-entropy laser light, tuned to slightly lower energy than the mean fluorescence of a material, is absorbed by that material, followed by efficient fluorescence generation and escape. On average, each photon that absorbs, fluoresces, and escapes the material, removes energy. Ideal absorption at 1020nm corresponds to the E4–E5 transition in Yb3+:YLF, as shown in the inset of Figure 1. At a given laser wavelength λ and sample temperature T, the ratio of the cooling power (Pcool) to the absorbed laser power (Pabs) defines the cooling efficiency. 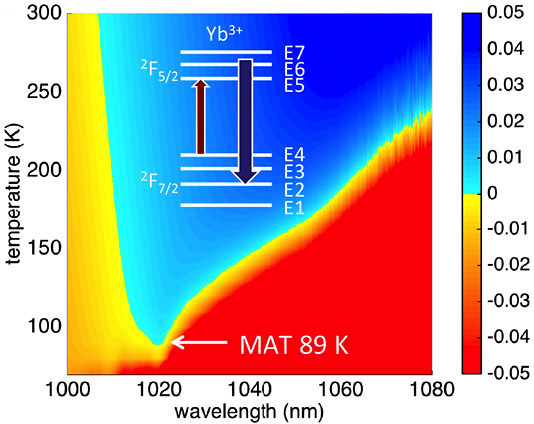 For cooling, the absorption efficiency and the fraction of absorbed photons should be as large as possible, which requires us to reduce the parasitic losses and to maximize the absorbed laser power. A contour map of the cooling efficiency of the current cooling crystal is plotted in Figure 1, where blue denotes cooling and red heating, with the minimum achievable temperature (MAT) shown at 89K.

We have achieved the first solid-state cooling to double digits by improving the material purity and enhancing absorption of the pump light. We improved material purity by identifying transition metal impurities in starting materials and securing sources of higher purity.6In this way, we have attained a background (parasitic) absorption coefficient in Yb3+:YLF of 1×10−4cm−1, which is half the value previously achieved. A non-resonant cavity increases the absorption path length through subsequent passes of a laser in an absorbing medium, typically in the shape of a ring of passes. Given a narrow window through which pump light must pass based on the visible cross section of the crystal, ∼3mm2, we made improvements to allow a smaller mirror separation, resulting in 22 passes through the crystal, an increase of 8 passes and pump power absorption of nearly 42% over the previous geometry. Together, these improvements have helped us achieve a record temperature of 91K (see Figure 2). 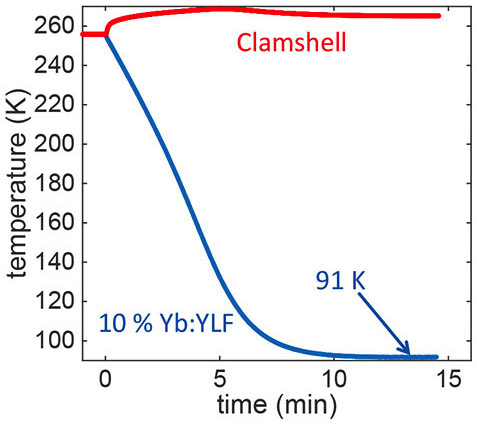 Figure 2. A record temperature of 91K is reached after 10 minutes. Yb:YLF: Ytterbium-doped yttrium lithium fluoride. The clamshell is a tightly fitting structure surrounding the cooling crystal, which serves both to absorb the higher-power crystal fluorescence and reduce the radiative heat load on the crystal.

In summary, we have fabricated high-purity Yb3+:YLF and made geometric improvements to pump absorption to achieve a record low cryogenic temperature by optical refrigeration, which is the only solid-state cooling technology capable of reaching such low temperatures. Cooling below 100K enables new pathways for vibration-free cryogenic cooling as well as associated applications such as long-wave IR sensors. Moreover, increased heat lift becomes available at higher temperatures between 110 and 150K where larger sensors or more demanding applications require greater heat removal. Several applications, particularly space-based IR sensors, benefit from vibration-free cryogenic operation. We are now making further improvements in cooling efficiency by testing new active rare-earth ions in purified crystalline hosts, as well as developing new laser sources. By combining these with further improvements in material purity, which we are currently working on in collaboration with Los Alamos National Laboratory, we hope to achieve the first solid-state cooling to liquid nitrogen temperatures.

Seth D. Melgaard is a National Research Council postdoctoral fellow at the AFRL. He received a PhD in optical science and engineering from the University of New Mexico in 2013. His research includes characterization and improvement of cryogenic optical refrigeration materials and components to create an all-solid-state cryocooler.