Solution-processable polymer solar cells comprising active layers with two components have reached power conversion efficiencies close to 10%, providing an attractive route for converting sunlight into electricity. Importantly, these values are approaching the predicted practical efficiency limit for single-layer two-component bulk-heterojunction (BHJ) polymer solar cells.1 The efficiency limit can be pushed to 14–15% through the use of a tandem architecture in which two absorbing layers are connected in series or parallel.1 This structure, however, requires additional and more complicated processing steps. BHJ polymer solar cells having three-component active layers (either two donors and one acceptor or one donor and two acceptors) provide an alternative approach toward higher efficiencies and preserve the simplicity of active-layer fabrication in a single processing step.2

Until 2011, efficiency enhancements in ternary-blend BHJ solar cells were only achieved by broadening the absorption spectrum by using constituents with complementary absorption profiles. Until then, it was believed that the open-circuit voltage (VOC) in these solar cells would be pinned by the lower of the two energy levels associated with the highest occupied molecular orbitals (HOMOs) of the two polymer donors.3 Thompson and colleagues demonstrated that, with judicious selection of donor and acceptor constituents, the VOC can—to the contrary—be tuned between the effective HOMO energy level of the polymer donors and the lowest unoccupied molecular orbital energy level of the electron acceptor without negatively affecting other solar-cell output parameters.4, 5 An organic alloy model6 that describes the origin of this tunability necessitates strong electronic interactions between the constituents for the device VOC to depend on the composition in the active layer.7 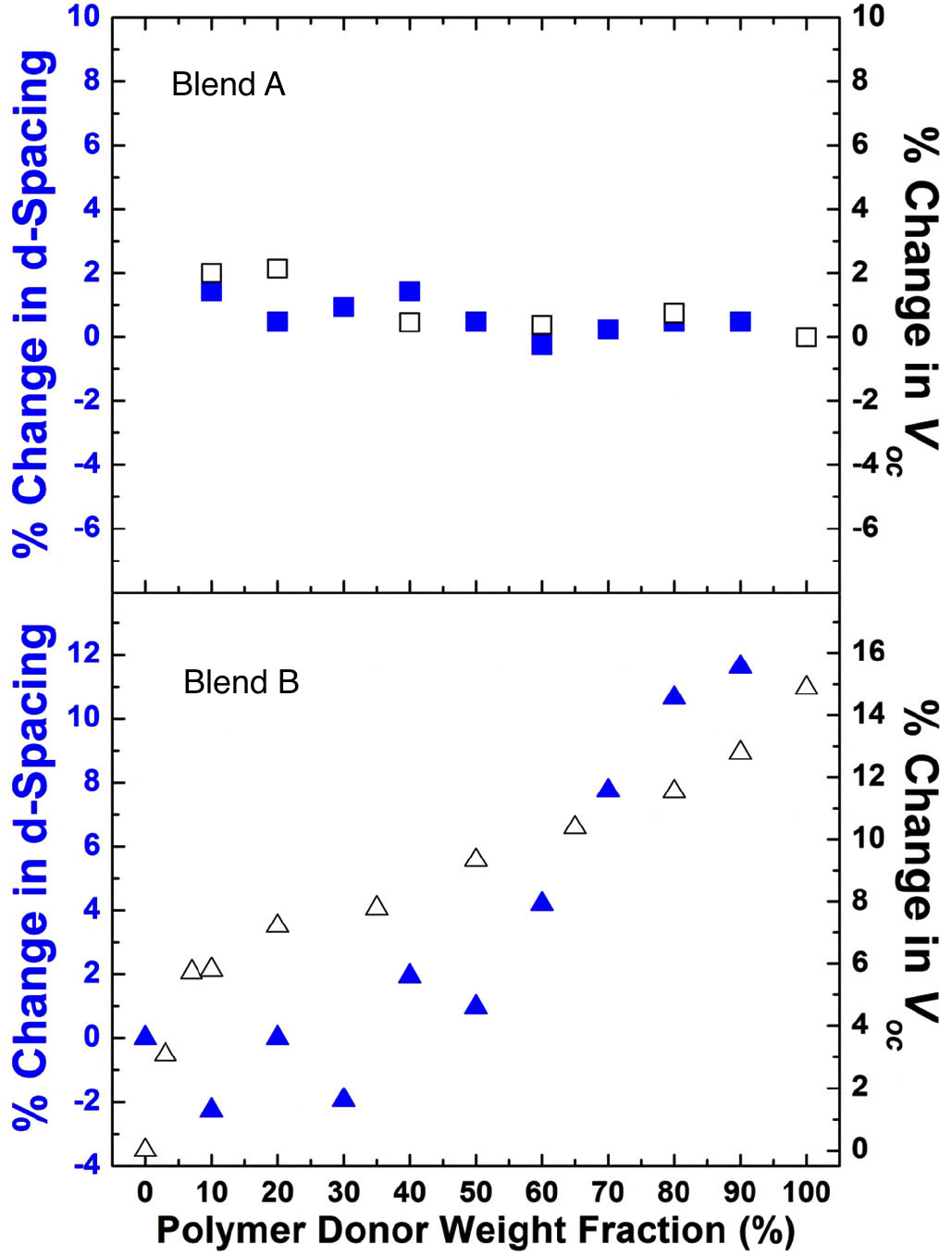 Figure 1. Percentage change in characteristic spacing (blue, filled shapes) of the crystallites of the polymer donor in blends A and B, illustrating pinned VOC (blend A) and variable VOC with composition (blend B) (black, open shapes).

Consistent with the organic alloy model, devices comprising blend A show an invariant VOC that is dictated by the lower energy level of the HOMOs of the two polymer donors. In contrast, our data on blend B in Figure 1 reveals that the d-spacing of the polymer donor being tracked changes continuously with blend composition. This decrease in d-spacing indicates a continuous change in the nanoscale crystalline structure of the polymer donor as it accommodates the gradual addition of the third constituent in the ternary blend. As such, we interpret the decrease in d-spacing as indirect evidence for intimate mixing of the two polymer donors in blend B. Devices comprising blend B show VOC that can be correspondingly tuned with the composition of the active layer.

In summary, our structural characterization reveals that intimate mixing of the constituents in ternary-blend active layers is critical for VOC tunability. While the constituents need not form well-defined co-crystals, they need to be chemically compatible for this mixing at the nanoscale to take place. To this end, our findings implicate surface energy differences (the difference of the square is proportional to chemical compatibility) as a solid predictor of VOC tunability. We are developing new design principles for next-generation materials systems that can lead to easily processable devices having high short-circuit current densities without sacrificing the open-circuit voltage.

We thank Barry C. Thompson and Andrey E. Rudenko at the University of Southern California for supplying the polymers. GIXD experiments were conducted at the Cornell High Energy Synchrotron Source. We acknowledge funding from the National Science Foundation (DMR-1035217 and DMR-0819860) and the Office of Naval Research (N00014-11-10328).

Yueh-Lin Loo (Lynn) is Theodora D. '78 and William H. Walton III '74 Professor in Engineering at Princeton University. Her research emphasis is the structural development of complex materials for plastic circuits and solar cells. She received her PhD from Princeton in 2001.

Petr P. Khlyabich is a postdoctoral research associate. His research focus is on processing-structure-function relationships in organic and organometal halides for next-generation photovoltaics.