Thermoelastic stress analysis (TSA)1 and digital image correlation (DIC)2 are two well-known, complementary full-field stress/strain measurement tools. Both provide data relating to the stress or strain change on the surface of a component. TSA provides the sum of principal stresses and DIC the component strains. The principles underlying the measurements are very different for the two techniques, and each has its strengths and weaknesses. For example, DIC provides the individual strain components but is limited in spatial resolution. Consequently, areas with high strain gradients, such as around defects, are poorly resolved. TSA, in contrast, offers high spatial resolution but can only provide the sum of the principal stresses, making it difficult to implement in the context of failure criteria. Together, however, the measurements offer a richer understanding of the thermomechanical behavior of the component or material being tested.

A key challenge is how to combine the two techniques to best effect. Whereas TSA relies on a dynamic cyclic load, using a lock-in algorithm to extract the amplitude of the thermal response, DIC is most commonly applied to static loading. Recently,3 we showed that it is possible to use the same lock-in approach in DIC to extract strain, enabling use of standard low-frame-rate cameras having high spatial resolution without the need to synchronize the image capture with the peaks in the cyclic loading. This offers a convenient solution for simultaneous data capture to combine the TSA and DIC techniques, as shown in the following examples.

The first example uses the ‘Brazilian disc’ to demonstrate how images from standard low-frame-rate cameras can provide the strain field on a dynamically loaded component. Figure 1 shows a disc loaded at 21.1Hz, imaged at a frame rate of only 2Hz, using a lock-in amplifier to obtain the strain amplitude. (Note that the TSA data is sampled at 383Hz.) The example highlights the spatial resolution of the TSA technique, but also the more limited information available regarding the different stress components present in the specimen. The advantage of full-field approaches over point measurements (such as strain gauge measurements) where a complex stress state exists is also apparent from the images shown in Figure 1. 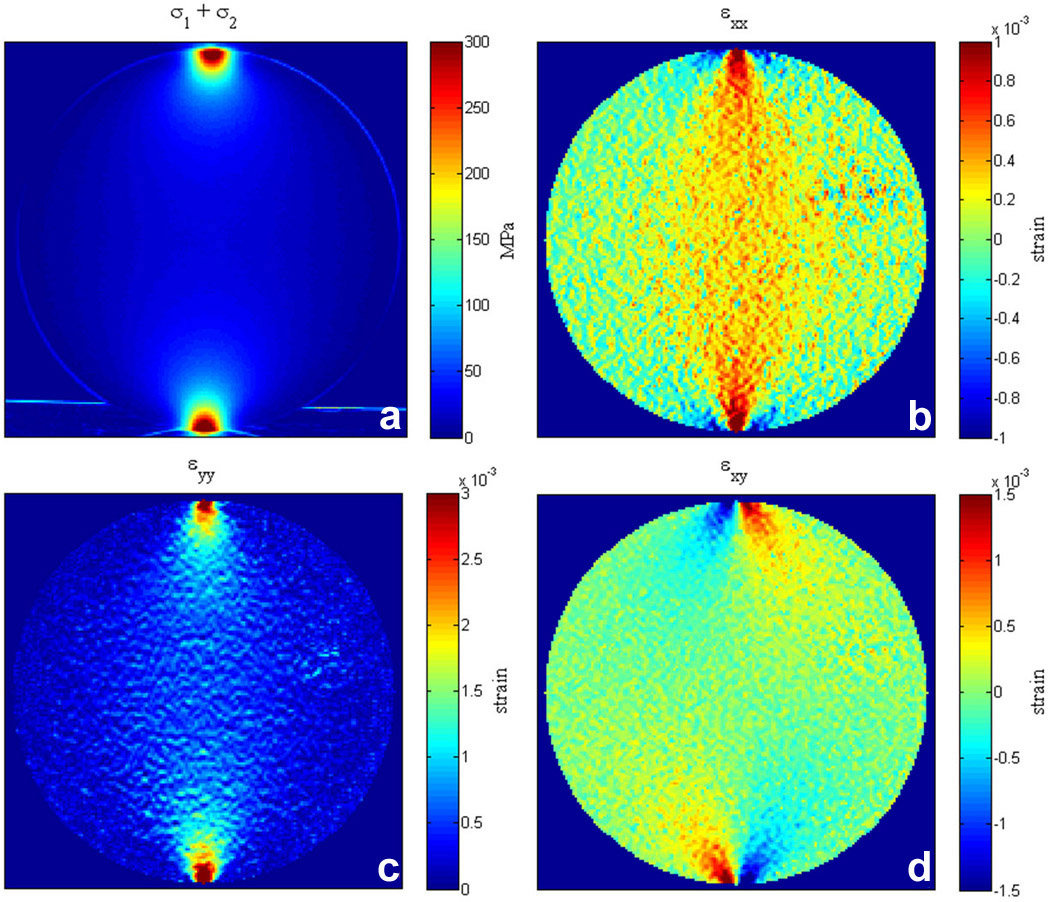 The second example shows a fatigue test in which a crack is grown in a T-shaped specimen (see Figure 2). The data presented in the figure are from a study preliminary to an investigation of welded T-joints.3 Here, the displacement field from the DIC is used to monitor the crack length over time. The use of the lock-in approach enabled the fatigue test to run without interruption while monitoring the crack development. TSA and DIC may also be used to monitor the development of stress/strain fields ahead of the crack tip. Figure 2 clearly shows the advantage of the increased spatial resolution of the TSA data in this region. 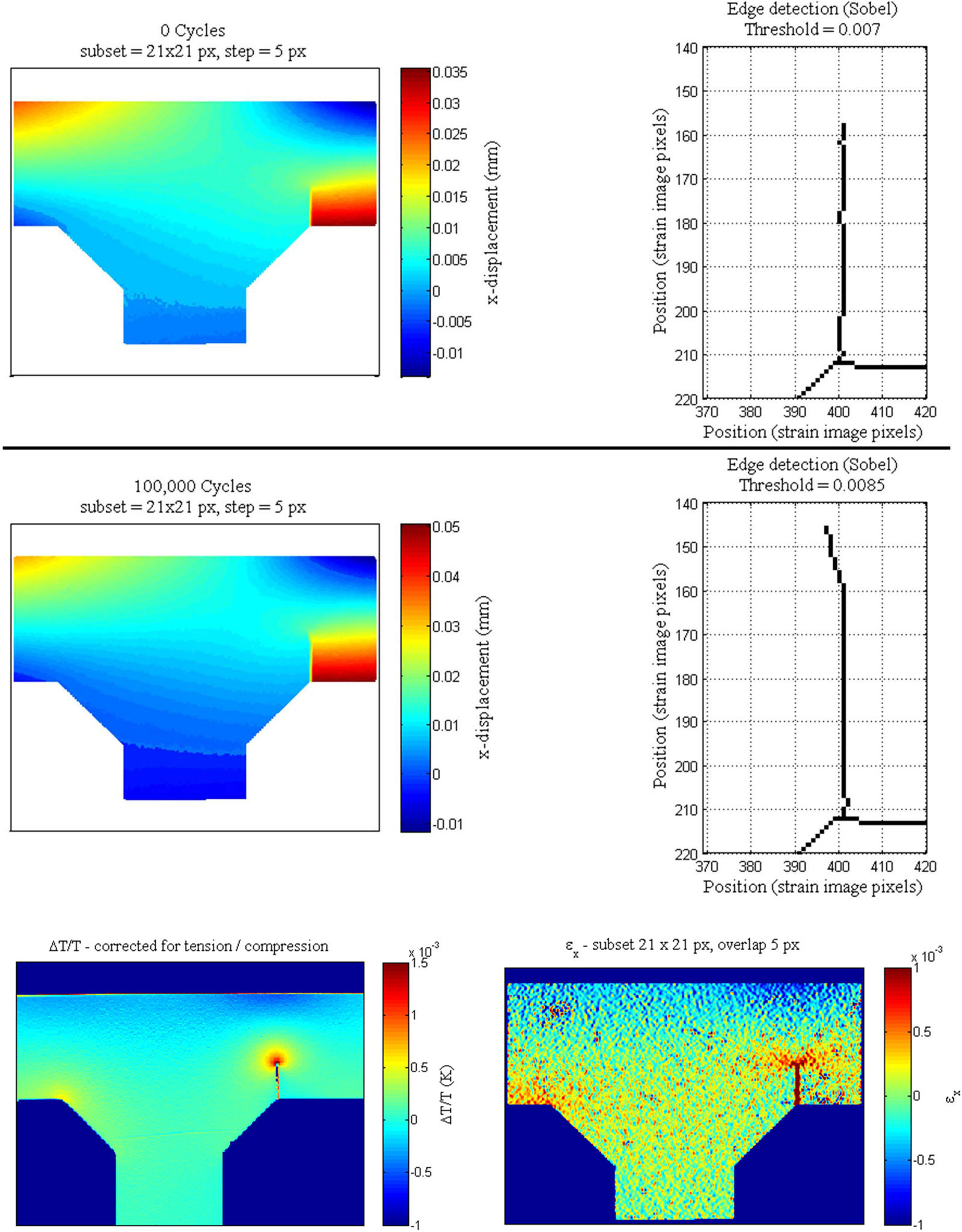 To address the significant limitation associated with the requirement of a servo-hydraulic test machine to apply the dynamic load, we developed a method to enable the TSA/DIC combined technique to be applied to structures in the field. We use a portable electromagnetic shaker to excite structures at their natural frequency. We then obtain a reference signal from either the excitation signal or an accelerometer attached to the structure. We have conducted initial inspections of plate structures using both DIC and TSA. Figure 3 shows a sample aluminum plate that has been excited in its second natural frequency at 221Hz. The camera used to collect the images for the DIC recorded at 1.25Hz. Both the TSA and DIC techniques approach the limits of their capabilities at these high excitation frequencies. This is mainly due to the necessarily reduced integration (exposure) time to avoid blurring of the images. However, alternative filtering approaches that are tailored to the application may improve the measurement resolution. Nevertheless, the data in Figure 3 identify the maxima in stress concentrations and out-of-plane displacement. Moreover, the resolution of the TSA data is sufficient to identify the contact point of the stinger used to excite the plate. 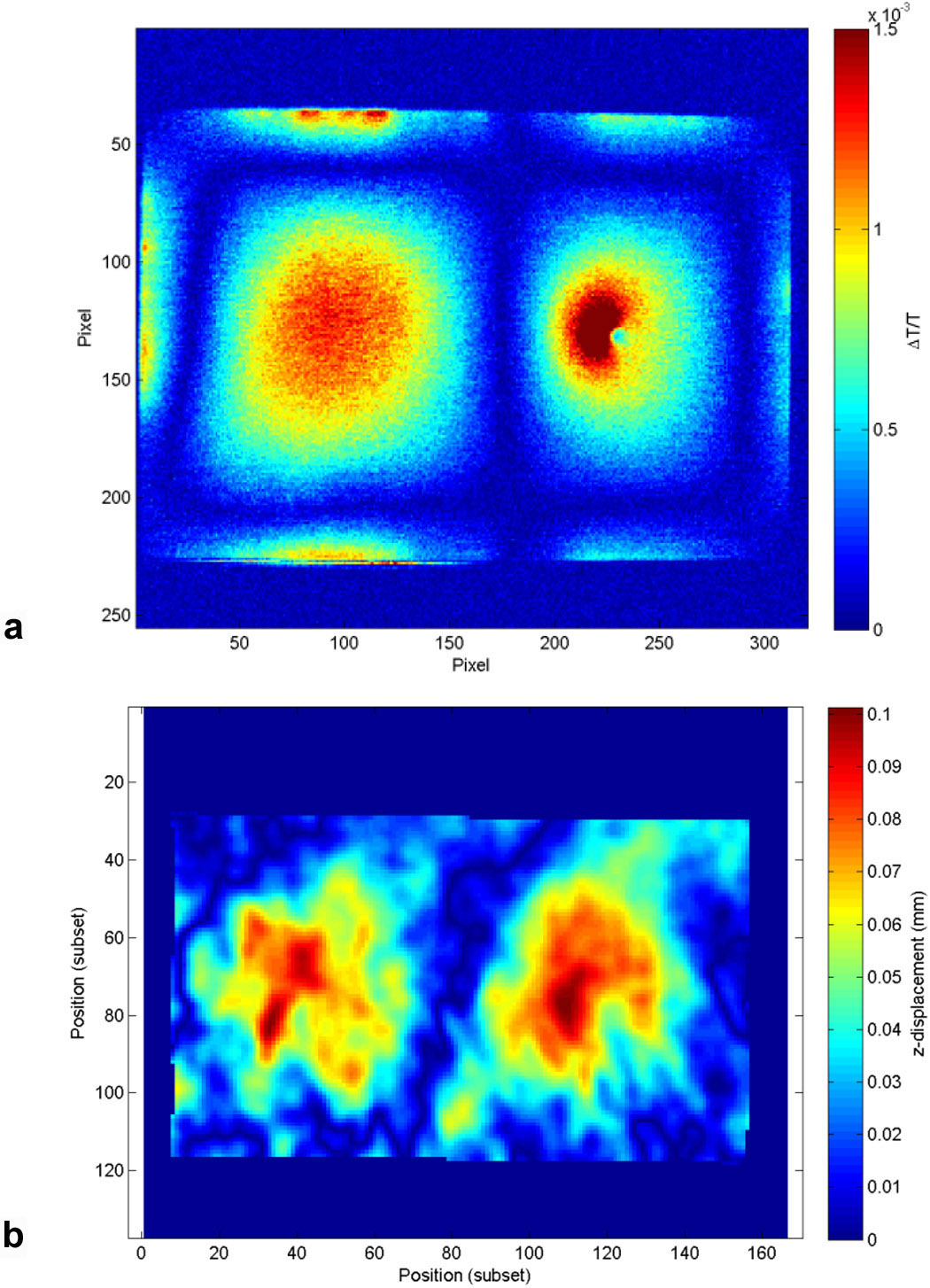 The example of the vibrating plate clearly shows the potential of the combined TSA/DIC approach for applications in the service environment, paving the way to a strain-based approach to nondestructive evaluation. The successful application of such a technique will complement existing methods such as ultrasound and thermography by showing how defects and damage affect the stress distributions in a structure. Our current work is focused on optimizing both the loading approach and signal processing to improve the resolution, and dispensing with the need for a reference signal to further simplify the setup and make the technique more flexible.

Richard Fruehmann received a PhD from the University of Southampton in 2009.

Rachael Waugh received a PhD from the University of Southampton in 2014.

Janice Dulieu-Barton is professor of experimental mechanics. She has published over 250 papers in archival journals and proceedings of conferences.