A low-power reflective display with a wide color gamut

High-resolution reflective displays with motion image capability and a broad color gamut are considered by many to represent the next-generation display technology. Reflective displays dramatically reduce power consumption and allow for the realization of new display applications, such as smart watches and digital textbooks.

In recent years, the electrophoretic display (EPD)—in which images are formed by the electronic rearrangement of charged pigment particles—has been widely implemented as a low-power display for e-book applications. The optical diffusion of EPDs is, however, essentially Lambertian, resulting in relatively low reflectivity. Narrow color gamut filters must therefore be used to avoid further reduction in the reflectivity, negatively impacting the display properties.

To overcome this issue, we have developed a reflective color liquid crystal display (LCD)1–4 using a mirror electrode and a diffusion film that is designed to diffuse light only in its direction of travel. This display system requires that the chromaticity of optical components be suppressed, and establishes a method by which the optical diffusion of reflected light can be controlled. This results in a display with a wide color gamut and high reflectivity, making it optically similar to white paper.

Iodine-based polarizers generally exhibit absorption at wavelengths of 480 and 600nm, due mainly to the poly(vinyl alcohol) (PVA)-iodine complexes I3- and I5-. However, each PVA-iodine complex suffers light absorption in wavelengths outside of its dominant wavelength.5 Additionally, the dichroic ratio in the dominant wavelength is not uniform between I3- and I5-. As a result, when the iodine-based polarizer is in the parallel state, transmittance is not constant in the visible-wavelength range, resulting in yellow coloration. The absorption wavelength of the polarizer is highly dependent on the conjugate structure of the molecules. We therefore synthesized the new pigment without a conjugate in its substituent, leading to the suppression of light absorption outside of its dominant absorption wavelength:6 see Figure 1(a). We also controlled the dichroic ratio of each dichroic pigment used in the polarizer to be the same in each dominant wavelength. In addition, we established a new technique for impregnating the dichroic pigment and crosslinker (boric acid) into a PVA film before the stretching process, enabling the alignment direction of each pigment to be controlled and the dichroic ratio of the polarizers to be improved. The results in Figure 1(b) show the transmittance to be constant in the visible wavelength range, with an extremely low chromaticity compared to traditional iodine-based polarizers.

Figure 1. (a) Light transmittance of (i) conventional blue dye and (ii) our dichroic dye. (b) Wavelength dependence of the achromatic polarizer in crossed and parallel states.

We fabricated a light diffusion film by exploiting the polymerization-induced phase separation effect.7 To induce this phase separation, we selected two materials with different molecular mobilities and reactivities, resulting in different radical reaction speeds. By altering the diffusion angle of the UV light used for polymerization, we were able to control the internal refractive-index distribution. Figure 2 shows this distribution along with the light distribution of our two light-diffusion films, which were fabricated using dispersed and collimated UV light, respectively. This figure shows that the internal layer structure and the anisotropy of optical diffusion can be controlled by altering the diffusion angle of the UV light.

To achieve a widely diffused light distribution similar to white paper, we fabricated two diffusion layers on a single polymer film using a two-step UV irradiation process. The initial UV process enables the first diffusion layer to be formed on the polymer film. After laminating this layer with a polyethylene terephthalate (PET) film, the second diffusion layer is formed using UV light. Our technique establishes a method to control optical diffusion by selecting an optimum layer structure and tuning the diffusion angle of UV light: see Figure 3.

Figure 3. (a) Internal refractive index distribution and (b) diffused light distribution of our double-layer light-diffusion film.

Using our new achromatic polarizer and light diffusion layer, we fabricated prototypes of monochrome- and full-color-type reflective LCDs. A variety of reflective LCDs are shown in Figure 4. We achieved high values of reflectivity (L*=71) and achromaticity that are superior to those found in monochrome EPDs. In addition, we achieved a wide color gamut (50% of NTSC color standard), wide viewing angle, and motion image capability in a full-color reflective LCD. 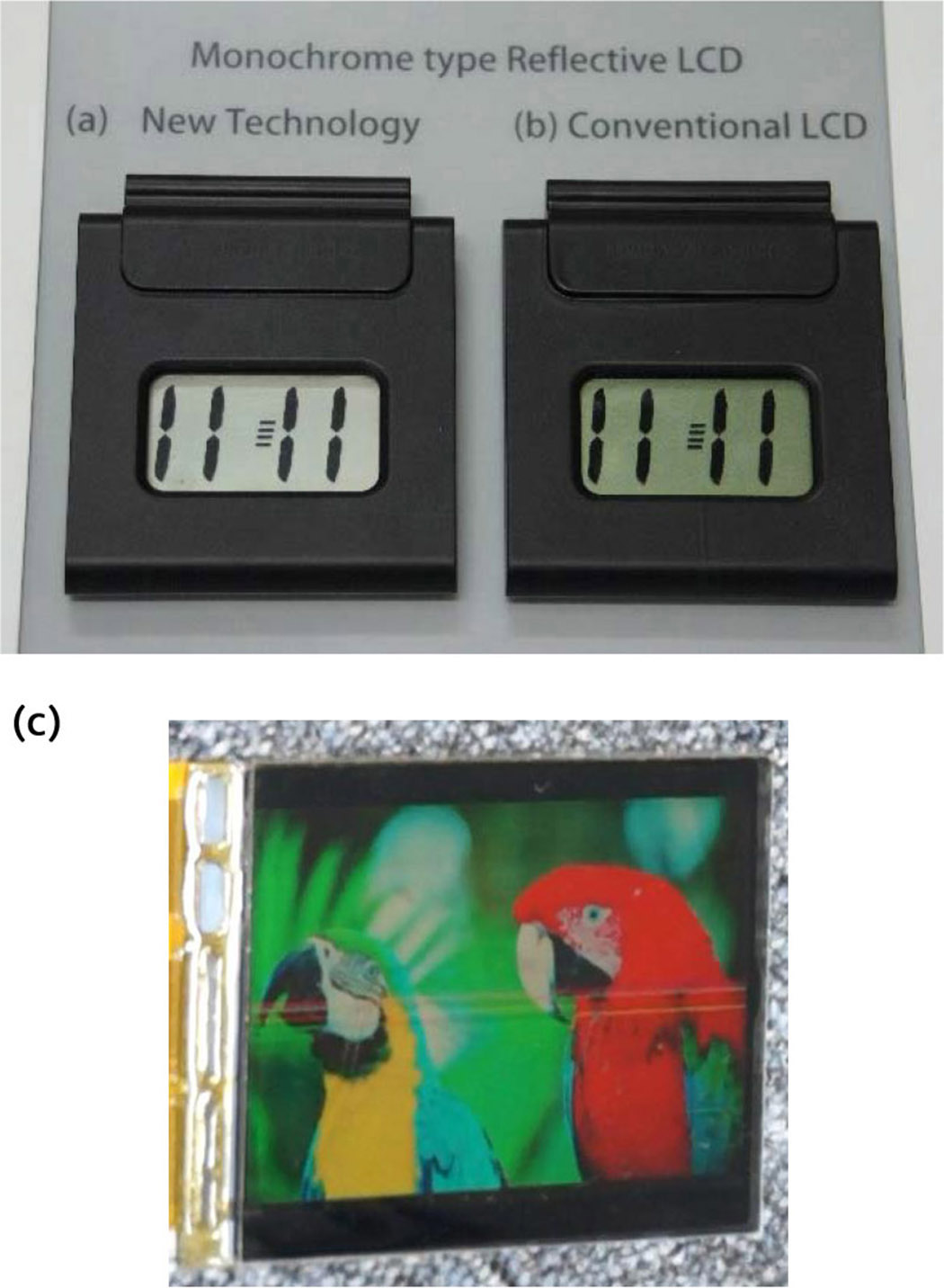 Figure 4. (a) New monochrome reflective LCD based on our technology. (b) Conventional reflective LCD. The text in this image is displayed on a commercialized electrophoretic display (a Kindle) for comparison. (c) Our reflective color LCD, with its wide color gamut and viewing angle.

We have established a novel technique by which to control the internal refractive-index distribution of polymer film. We have also developed new dichromatic pigments and manufacturing processes that enable the anisotropy of optical diffusion and the wavelength dependence of the polarizer to be optimized. As a result, we have successfully developed a low-power color reflective LCD with a wide color gamut, viewing angle (comparable to white paper), and motion-image capability. We are now working to improve the dichroic ratio of achromatic polarizers to further improve the reflectivity of these LCDs.

Takahiro Ishinabe is an associate professor. His current research focuses on reflective and flexible displays, LCD evaluation, and LC technologies for photonics applications. He is a senior member of the Society for Information Display and received an SID Special Recognition Award in 2011.