Demand for renewable energy continues to increase, and photovoltaic (PV) conversion of light into electricity offers the chance to harness the vast quantity of energy reaching us from the sun every day. However, the efficiency of existing single-junction PV cells is disappointing, in part due to the Shockley-Queisser (SQ) limit. The SQ efficiency limit results largely from inherent heat dissipation that accompanies the quantum process of electrochemical potential generation. Solar thermophotovoltaics1–3 (STPV) and thermophotonics4 aim to harness this dissipated heat and claim a very high theoretical limit. Nevertheless, none of these concepts has been experimentally proven to overcome the SQ limit, mainly because of the very high operating temperatures required, which significantly challenge electro-optical devices.

In contrast to STPV and thermophotonics, which capture thermal emission at thermal equilibrium, photoluminescence (PL) is a fundamental light-matter interaction under nonequilibrium thermodynamics, which conventionally involves the absorption of an energetic photon, thermalization (i.e., each excited electron relaxes to the band edge by releasing heat), and the emission of a red-shifted photon. Conversely, in optical refrigeration, absorption of a low-energy photon is followed by endothermic PL of an energetic photon.5, 6 Both aspects have mainly been studied where thermal excitation is far weaker than photonic excitation, and the general case of thermal emissions and PL has gone unexplored. We have considered the theory and conducted experiments for the general case where the thermal and photonic excitation are independent.

We studied endothermic PL experimentally at high temperatures7 and have shown how, in accordance with theory, the PL photon rate is conserved with increasing temperature, while each photon is blue-shifted (becomes more energetic). A further rise in temperature leads to an abrupt transition to thermal emission where the photon rate increases sharply. In addition, we found that endothermic PL generates photons orders of magnitude more energetic than thermal emission at similar temperatures. Relying on these observations, we have proposed and studied thermally enhanced PL for highly efficient solar-energy conversion. Here, solar radiation is absorbed by a low-bandgap PL material. The dissipated heat is emitted by endothermic PL, and harvested by a higher-bandgap photovoltaic cell. While such a device operates at much lower temperatures than STPV due to the optical refrigeration effect, it has similar theoretical maximal efficiencies that approach 70%.

Recent research in optical refrigeration has demonstrated cryogenic temperatures with quantum efficiency approaching unity. At such low temperatures, thermal excitation is negligible with respect to the PL excitation. In contrast, at high temperatures, the PL and thermal excitation compete for dominance. In general, PL requires directional energy transfer from the excited to the emitting modes. This only occurs if the excitation rate is above the rate of thermal excitation where directional energy transfer is canceled by thermal equilibrium. This tradeoff is expressed by the generalized Planck's law, suggested by Würfel, describing the spontaneous emission rate of a bandgap material.8Far from lasing conditions, this PL radiation (R) can be approximated as Planck's thermal emission, εR0, enhanced by μ, the chemical potential: R=εR0eμ/KBT where ε is the emissivity, KB is the Boltzmann constant, and T is the temperature. With a constant pump rate and quantum efficiency, thermodynamics sets the emitted photon rate to be constant when μ>0, independent of the temperature. 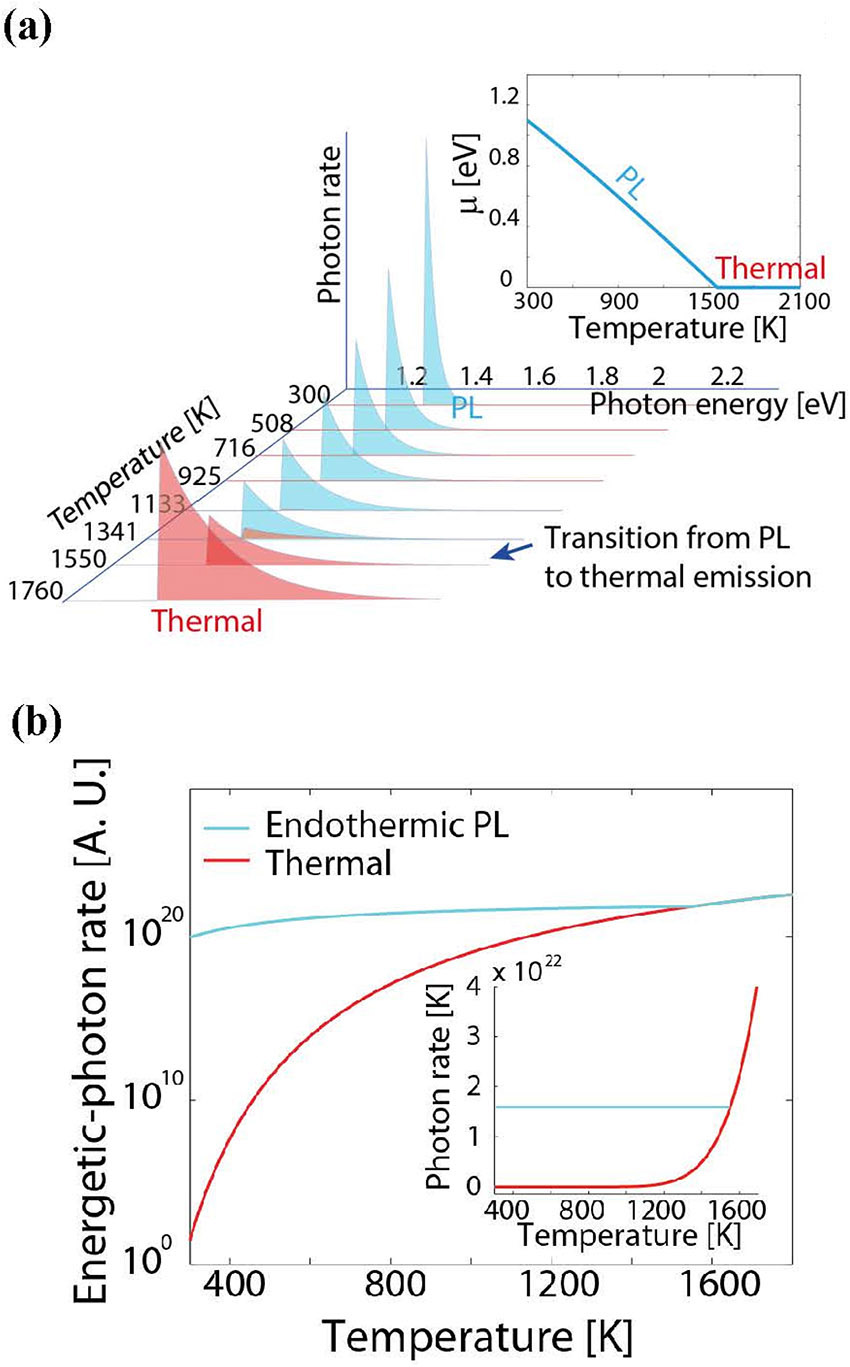 We studied such a transition between PL and thermal emission experimentally for the fluorescence of a neodymium-doped silica fiber tip under 532nm PL excitation. To control the heat current separately from the PL excitation, we used a 10.6μm wavelength carbon dioxide laser. At this wavelength, the photons are efficiently absorbed by the silica, and converted to a constant heat flow. The temperature and the chemical potential are uniquely defined by these two (10.6μm and 532nm) currents. The experimental results fit our theoretical prediction well, showing the conservation of PL photon rate and the blue shift with temperature rise.7We also observed an abrupt transition to thermal emission with a sharp increase in photon current. The energetic photon (λ<850nm) rate generated by such endothermic PL is orders of magnitude higher than the photon rate at similar wavelength range generated at the tail of thermal emission. This opens the way for efficient conversion of heat to electricity by harvesting the energetic photons with high-bandgap PV cells.

We have conducted simulations of a thermally enhanced PL solar cell, where a thermally insulated low-bandgap PL material completely absorbs the solar spectrum above its bandgap and emits endothermic PL toward a higher bandgap PV cell, maintained at room temperature. In this way, the PV cell converts the excessive thermal energy to electricity. Our simulations show that the high photon rate generated in the low-bandgap absorber and coupled to the high-bandgap PV cell should result in high electric current and high voltage, with a theoretical maximal conversion efficiency of 70%. We are now conducting initial experiments with such a device.

Carmel Rotschild is an assistant professor. His research areas include the thermodynamics of radiation, nonlinear optics with excitonics, solar-powered lasers, and light management of thermal radiation.