Conventional laser resonators comprise a ‘box’ made of two mirrors, one of which is partially transmitting to allow some laser output. While many parameters affect the transverse intensity profile of the light that comes out, here we will consider only the impact of the optical elements (including the mirrors) within the box (see Figure 1). When elements of spherical curvature are used, such as lenses and curved mirrors, the well-known Hermite-Gaussian and Laguerre-Gaussian laser beams are produced (see movies available online1, 2). But it is advantageous, and in many instances necessary, to customize the intensity profile of the emitted light to produce ‘structured’ light.

Figure 1. A laser resonator confines light in a box made of mirrors. The surface structure of the mirrors as well as other optical components between the mirrors determine the intensity profile of the light that emerges from the laser.

Many techniques have been developed over the years to achieve this, all relying on transverse mode discrimination by loss. In a typical scenario, a custom optic is inserted into the cavity so that one particular mode has a lower loss than all the rest. As the modes must repeat after each round trip, the small loss difference becomes significant after some number of passes and so the mode with the lowest loss is the first to lase. In this way the desired mode is selected, albeit with some competition from the next lowest loss mode. One example of this approach is so-called amplitude filtering, in which a bespoke aperture is created in the cavity to select a mode. For instance, a circular aperture of an appropriate size to select a Gaussian beam is now an often-exploited tool. In this example, the Gaussian beam passes through the aperture more or less unperturbed, while other modes (of larger size) are ‘clipped’ and experience higher loss. This is the simplest example of amplitude filtering, but it is also possible to customize the light from laser cavities by phase control.

In the early 1990s, when diffractive optics came to the fore, the dynamic phase of light was used for mode selection. The dynamic phase of light, δdyn, is associated with the optical path length that the light experiences, and is given by δdyn=2πnd/λ, where n and d are the refractive index and thickness of the medium, respectively, and λ is the wavelength of the light. By altering the thickness of the medium spatially across the optic, the dynamic phase leads to a spatially varying phase. Diffractive optical elements (DOEs) do this by modulating the depth of the optic to one optical cycle, so that the maximum depth does not exceed λ/(n−1). More recently, this concept has been exploited in liquid crystal technology in the form of spatial light modulators to locally vary the refractive index rather than the depth, but again resulting in a spatially varying dynamic phase. Examples of these dynamic phase changes are shown in Figure 2(a) as grayscale images, with white through black representing a zero through 2π phase change. Figure 2(b) shows the corresponding structured light produced when the phase changes are imposed outside the laser cavity. 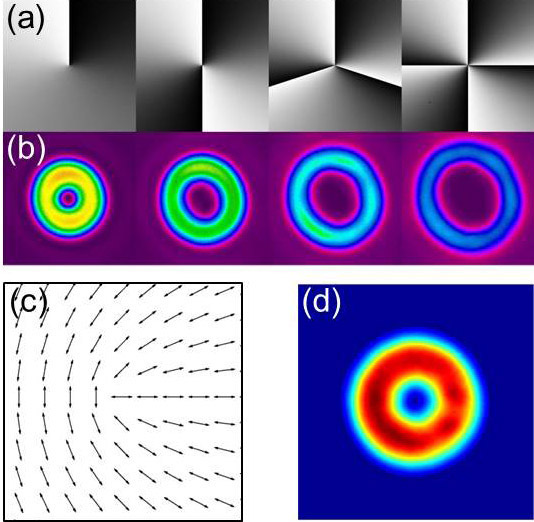 Figure 2. (a) Examples, as grayscale images, of the dynamic phase changes required to produce light carrying orbital angular momentum (OAM) of ℓ=1 , 2 , 3 , 4(left to right). (b) Examples of OAM beams produced experimentally by dynamic phase change outside the laser. (c) Example of an optical element based on the geometric phase change to produce an OAM beam of ℓ=1. Arrows indicate the orientation of the optical axis. (d) An example of such a beam produced by this element inside the laser.

It is possible then to employ standard tools from laser beam shaping to create customized intensity profiles, usually in the far field. This beam shaping can also be done inside a laser cavity by ensuring that only those modes with the correct phase are repeated after one round trip. In the past, this intra-cavity phase control was achieved with DOEs as well as with carefully shaped mirror surfaces, and colleagues and I have in this way created flat-top and Gaussian beams as the output.3, 4 More recently, we have mooted the idea of using spatial light modulators inside a laser and shown it to be a versatile approach for laser mode control on the fly. In this form, the dynamic phase can be changed on demand with nothing more than an image change on a computer, with no realignment of the laser required. In principle, any mode can then be created with a single device, with Hermite-Gaussian, Laguerre-Gaussian, Airy, flat-top, and fiber modes all generated to date.5

Many decades ago it was realized that polarized light experiences an ‘extra’ phase change when passing through an anisotropic medium. This is the well-known Pancharatnam-Berry phase, Φ, and the total phase is adapted to read δtotal=δdyn+δgeo, where the geometric phase, δgeo, is given by ±2Φ (the sign is polarization-dependent). The geometric phase can be used to produce a spatially varying phase by using an optic made of a material where the orientation of the optical axis changes across the optic, as shown in Figure 2(c). In this case, the spatially varying geometric phase experienced by a particular polarization creates the desired effect.

In recent work this geometric phase control has been used to customize the light from an otherwise standard solid-state laser resonator, producing light carrying orbital angular momentum (OAM) in a controlled manner. There is significant interest in light that carries OAM, where the azimuthal phase varies across the beam following iexpi(iℓφ), where ℓ is an integer and φ is the azimuthal angle; the beams shown in Figure 2(b) are examples of such light. But producing such light from a laser cavity is not a trivial task: most attempts to date have produced either coherent or incoherent superpositions of OAM modes, neither of which actually carry any OAM.6 In some instances, OAM modes are produced but the sign of the OAM is not controllable due to the inherent degeneracy of opposite-signed OAM modes. By inserting optics based on the geometric phase change, we were able to break this degeneracy and define the sign and value of the OAM carried by the output mode, with an example of the output beam shown in Figure 2(d). This work in progress is the first time such a technique has been used inside a laser cavity.7

In summary, we have shown that it is possible to exploit both the dynamic and geometric phase changes of light to produce customized modes from laser resonators. To date this control has been achieved with diffractive optical elements, graded-phase mirrors, spatial light modulators, and non-homogeneous polarization optics. We are now working on combinations of these tools to control the vector nature of the light's output.

Andrew Forbes has recently started a new Structured Light Laboratory. He is an SPIE Fellow and chair of the SPIE conference on Laser Beam Shaping.