The natural world as perceived by our senses appears to be ruled by the laws of classical physics, as established by Galileo, Newton, Maxwell, and many others. Conversely, the microscopic world of atoms, molecules and elementary particles (such as electrons and photons) obeys the strange laws of quantum mechanics. Perhaps the most dazzling characteristic of the quantum world is the existence of peculiar states of either matter or light where two or more distinct particles, as two electrons or two photons, are entangled. Entanglement implies that, for example, measuring the spin of one particle allows one to predict the measured value of the spin of the other particle, no matter how distant the two particles are.

Traditionally, entanglement has been regarded either as a peculiar feature of quantum mechanics or as a powerful resource especially for quantum information science.1 In particular, quantum approaches relying on entangled photon pairs have been proposed to extend optical measurements beyond the limits encountered in classical optics. However, quantum states of light are not always easy to prepare. In some cases these problems can be circumvented by using classical, as opposed to quantum, beams of light with special characteristics akin to the ones exhibited by entangled quantum systems: this brings outstanding advantages over conventional measurements in metrology and sensing. In standard Mueller matrix polarimetry, information about a sample illuminated by polarized light is deduced by analyzing the scattered light. We have shown that using beams of light with nonuniform polarization patterns enables real-time single-shot Mueller matrix polarimetry, a technique crucial to testing optical, chemical, and structural properties of materials quickly, precisely, and without damaging the sample.

We have recently demonstrated the existence of intrasystem entanglement between polarization and spatial DoFs of a single beam of classical light, in radially and azimuthally polarized laser beams.4 In these beams, the direction of the electric field (polarization) varies across the transverse section of the beams, as shown in Figure1(a) for a radially polarized beam. The occurrence of intrasystem entanglement in optical beams is often referred to as ‘classical entanglement.′5–8 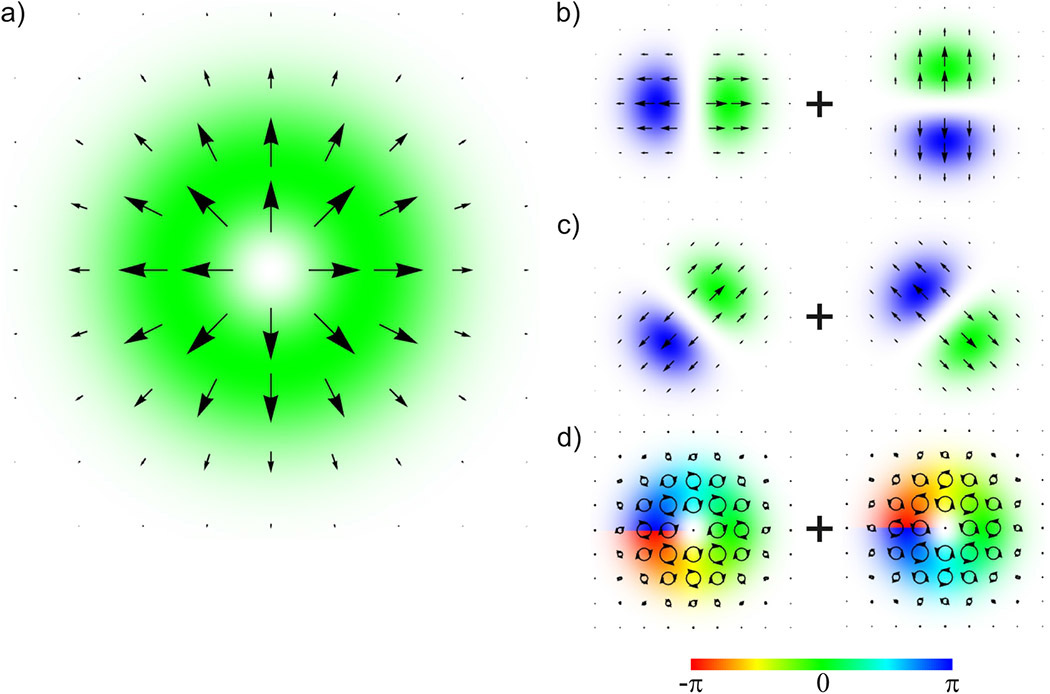 In our work, we use a radially polarized beam of light to perform highly efficient Mueller matrix polarimetry.9 The underlying idea is simple: in a conventional Mueller matrix measurement setting, an either transmissive or scattering material sample (the object) is illuminated with a light beam (the probe) prepared in at least four different polarization states in a temporal sequence. The optical properties of the sample can be inferred by analyzing the polarization of the transmitted or scattered light. In our alternative setting, the object is probed only once with a single radially polarized beam. The light transmitted or reflected by the object is then analyzed both in polarization and in spatial DoFs by means of suitable polarization and spatial mode selectors. This novel technique is explained in detail elsewhere.10

In practice, in our setting the polarization DoFs of the beam are used to actually probe the object and the spatial DoFs are used to post-select the polarization state of the incident light. This scheme outperforms conventional ones because the radially polarized beam carries all polarizations at once in a classically entangled state—see Figure 1(b–d)—thus providing for a sort of polarization parallelism. With conventional Mueller matrix measurements it is necessary to probe the object fourfold, but using radially polarized light we probe only once and obtain the same amount of information. Therefore, for all practical applications where the optical properties of the sample change rapidly with time, our method presents an outstanding advantage over conventional ones. This new technique can provide significant improvements in polarization metrology applications.

In summary, we have shown how to exploit classical entanglement in polarization metrology, using radially polarized beams of classical light to perform real-time single-shot Mueller matrix measurements. These are useful for quick, precise, and nondestructive testing of materials’ optical, chemical, and structural properties. The novelty of our approach is that, while the speed of conventional Mueller matrix measurements is limited by the need to probe the sample four times in sequence with light of different polarization, in our setting the four probes are made in parallel via a single radially polarized beam of light. Our results generalize and extend to the classical optics regime some already known techniques in quantum metrology.11 Last but not least, our work furnishes a proof of principle that some optical measurements requiring entanglement but not nonlocality may be accomplished by using classical light. We are currently undertaking further investigations in this direction.12