The recent development of frequency combs has revolutionized the field of high-resolution spectroscopy. These combs can be used as frequency domain ‘rulers,’ and can be realized from either a short-pulse mode-locked laser1 or via nonlinear processes.2, 3 The laser emission from a comb can be stabilized and frequency-locked to highly stable microwave oscillators. The most common—and most efficient—method of stabilizing the offset frequency of a comb is based on a self-referencing approach,4 which requires laser emission that spans at least one octave. It is therefore important to achieve an octave-spanning spectrum with any broadband laser that is used for frequency comb generation.

Frequency combs have so far been demonstrated in the visible,5 mid-IR,3, 6,7 and terahertz (THz)8,9 regions of the electromagnetic spectrum. The effective metrology and high-precision spectroscopy measurements that the combs enable1, 10–12 have many applications in several fundamental research and industrial environment contexts. Quantum cascade lasers (QCLs)13 are based on intersubband transitions between quantized electronic energy levels in the conduction band of semiconductor heterostructures. They can be used as compact coherent sources that emit radiation across mid-IR and THz wavelengths.14 QCLs constitute an ideal platform for broadband sources and nonlinear optics as they exhibit an absence of reabsorption across the band gap.

We have developed new QCLs with ultra-broad gain bandwidths. We achieve these bandwidths by exploiting the quantum engineering potential of intersubband transitions. We integrate different designs of a quantum cascade structure in the same laser ridge, but tailored for different frequencies. This heterogeneous cascade concept was first demonstrated for mid-IR QCLs,15 and has also been successfully implemented in THz QCLs.16–19 In our work, we use three different active regions that are centered at 2.9, 2.6, and 2.3THz, and stacked together to fill the core of a broadband, cutoff-free double metal resonator.20, 21 As illustrated in Figure 1, THz lasers rely on metal-metal waveguides for optimal mode confinement. We have therefore taken special care in the design of the active regions and the resulting gain profile to obtain uniform power across the entire lasing region. 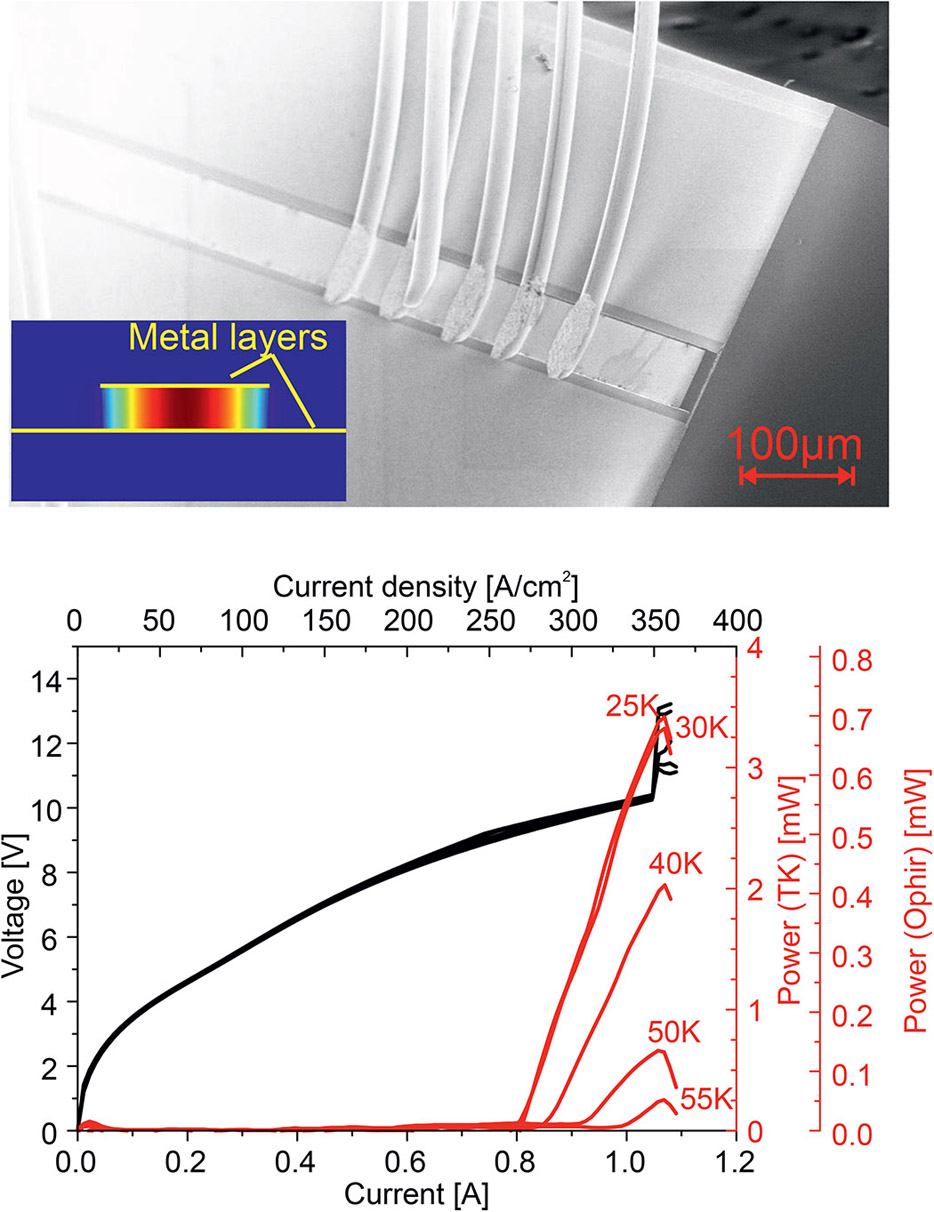 As has previously been shown,19 lasing spectra broaden gradually when their bias current increases. The broadest bandwidth is reached for a current density of 350A/cm2. A typical spectrum that we obtained at this operating point from a 2mm × 50μm dry-etched laser ridge is shown in Figure 2(a). In this spectrum, at temperatures up to 30K, the lasing region extends from 1.64 to 3.35THz (i.e., it covers more than one octave). The mode intensity is very well distributed, and we achieved a total of 84 modes above the lasing threshold. The broadband emission from this laser is present up to 40K, where the bandwidth is still 1.53Thz. 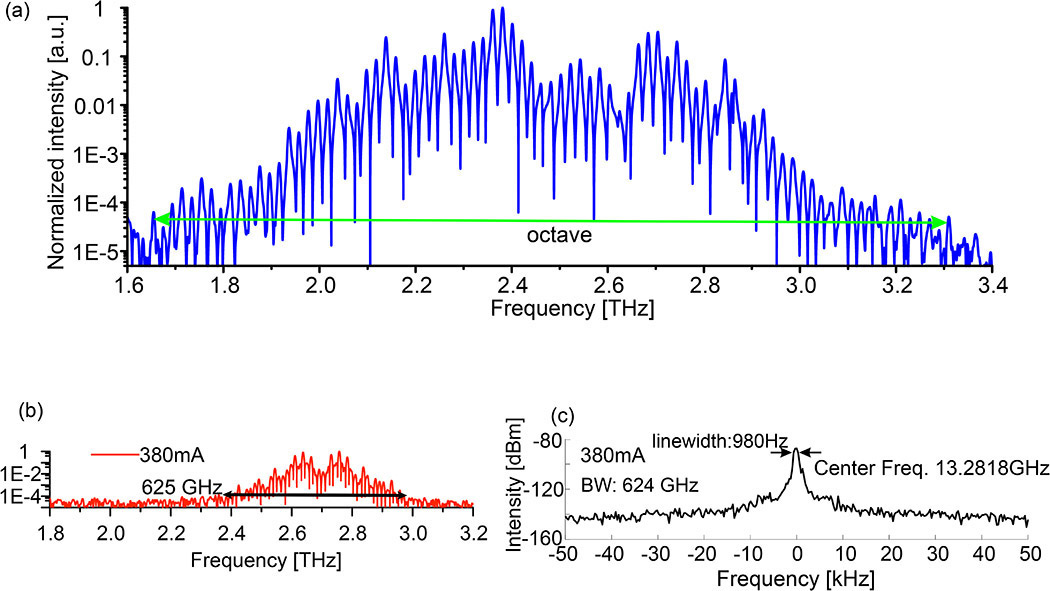 Figure 2. (a) Octave-spanning spectrum from a dry-etched 2mm ×50μm laser operating in CW mode (9.7V, 0.35A, 350A/cm2) at 18K. (b) Spectral emission for the maximum bandwidth of the comb regime, measured at 380mA. (c) Corresponding electrical beatnote, measured with an antenna. a.u.: Arbitrary units. BW: Bandwidth.

To characterize the spectral emission and coherence from our new laser, we performed beatnote (microwave signal caused by nonlinear mixing of laser modes inside the cavity) measurements at different points along the light-current curve. For our typical cavity lengths, the beatnote is in the 10–20GHz range. The presence of a beatnote, its intensity, and its linewidth are quantitative parameters that can be used to characterize the coherence of different lasing modes in a multimode laser. Beatnote analysis such as this is routinely used with frequency combs. A very narrow beatnote (less than 4kHz) is present up to an operating current of 20mA. When the bias current is increased further, however, the beatnote instantaneously broadens to have a linewidth of hundreds of MHz. It has been shown experimentally3, 9 and theoretically22 that the beatnote collapse of a QCL is a clear indication that the laser is acting as a frequency comb.

With QCLs, comb operation does not correspond to the formation of short pulses in the time domain. This is in contrast to frequency combs that are obtained from mode-locked lasers. For QCL combs—as for Kerr combs that are based on micro-resonators2—the output power is about constant in time. As further evidence for comb operation, we have shown that filtering the laser signal at different frequencies does not affect the presence and linewidth of an optically measured beatnote.20 An electrical beatnote measurement, with corresponding spectral emission in the THz domain, is shown in Figure 2(b) and (c). The maximum bandwith—at which comb operation is observed—is 625GHz. This frequency corresponds to 23% bandwidth, with respect to the central frequency of 2.67THz.

We have created an octave-spanning semiconductor laser that emits in the THz range, with no spectral holes in either pulsed or continuous wave operation. We believe that this is the first octave-spanning semiconductor laser to have been developed. Our laser features a comb region with a sub-kHz beatnote, and corresponding spectral emission of more than 600GHz bandwidth.20 Although the operating conditions of our laser are limited to cryogenic temperatures, we believe that these lasers can constitute the building blocks for a compact, high-resolution spectroscopic system that is based on THz combs. We have also demonstrated that THz QCLs can be integrated easily into portable systems.23 Our future research will focus on self-stabilization of the frequency comb and the application of these devices in dual-comb-based spectrometers,24 to enable fast THz spectroscopy without moving parts.

We gratefully acknowledge funding for this work as part of the European Union's TERACOMB research project (FP7-ICT-2011-C, project 296500). We also thank G. Villares, A. Hugi, C. Bonzon, and S. Barbieri for helpful discussions.

Giacomo Scalari obtained his PhD in 2005 and is currently a senior staff scientist. His research interests range from THz QCLs to THz strong light-matter coupling. He received the 2006 Swiss Physical Society award for applied physics.