Creating a quantum fluid in a polymer

Quantum mechanics usually governs physics at the nanometer scale, describing very successfully the structure and the interactions of atoms and molecules. In a Bose-Einstein condensate (BEC), the accumulation of a macroscopic number of individual particles in the same quantum state1 brings these effects to the micrometer scale, and hence makes it easier to peek and poke into quantum physical phenomena.

We can use quasi-particles called exciton-polaritons, a mixture of bound electron-hole pairs and photons, to realize BECs in solid matter. Such particles arise from embedding a suitable optically active material in a microcavity.2 However, they are driven and dissipative in nature due to the requirement for a pump laser and polariton lifetimes on the order of picoseconds. Until very recently, these approaches critically required crystalline semiconductor quantum well structures of the highest quality, sometimes cooled down to a few Kelvin.3

Recently, we demonstrated BECs at ambient conditions using spin-coated polymer inside dielectric microcavities,4 enabling investigation of the same physics with reduced experimental efforts. Surprisingly, it is possible to achieve a very ordered BEC phase in an intrinsically disordered, amorphous material. This offers the possibility of harnessing the nonlinearity and coherence of the polariton BEC for opto-electronic devices, such as ultrafast optical switches and very energy-efficient microlasers that operate without the need for population inversion.

In our work,4 we realized a polariton BEC by sandwiching a ladder-type conjugated polymer called MeLPPP5 between two sputtered distributed Bragg reflector mirrors. This polymer features a rigid backbone that crucially reduces the spectral absorption linewidth. The strong coupling regime and the creation of polaritonic states is manifested by a splitting of the energy levels when the optical microcavity and the excitons in the polymer are brought into resonance. An important ingredient for the phase transition to a BEC is the presence of thermalization.

We excite the microcavity using off-resonant laser pulses lasting a few picoseconds. When the excitation density is increased above a critical value, we observe a sudden increase in the number of polaritons in the lowest energy and momentum state. This dramatic narrowing in the emission linewidth and the in-plane momentum distribution marks the emergence of the BEC. The strong nonlinearity is a consequence of the stimulated scattering process. Repulsive Coulomb interaction between the polaritons themselves and the exciton reservoir leads to a slight blueshift (a reduction in wavelength and increase in frequency) in the emission energy above the transition point.

The hallmark feature of BECs is the macroscopic coherence, which we can probe by sending the light from the polariton BEC through a Michelson interferometer and recombining the two interferometer arms on a camera. The interference fringes span up to several tens of micrometers (see Figure 1), showing that the polaritons indeed possess first-order phase coherence over these distances. Irregularities in the fringe pattern are indications of excitations such as vortices in the condensate. 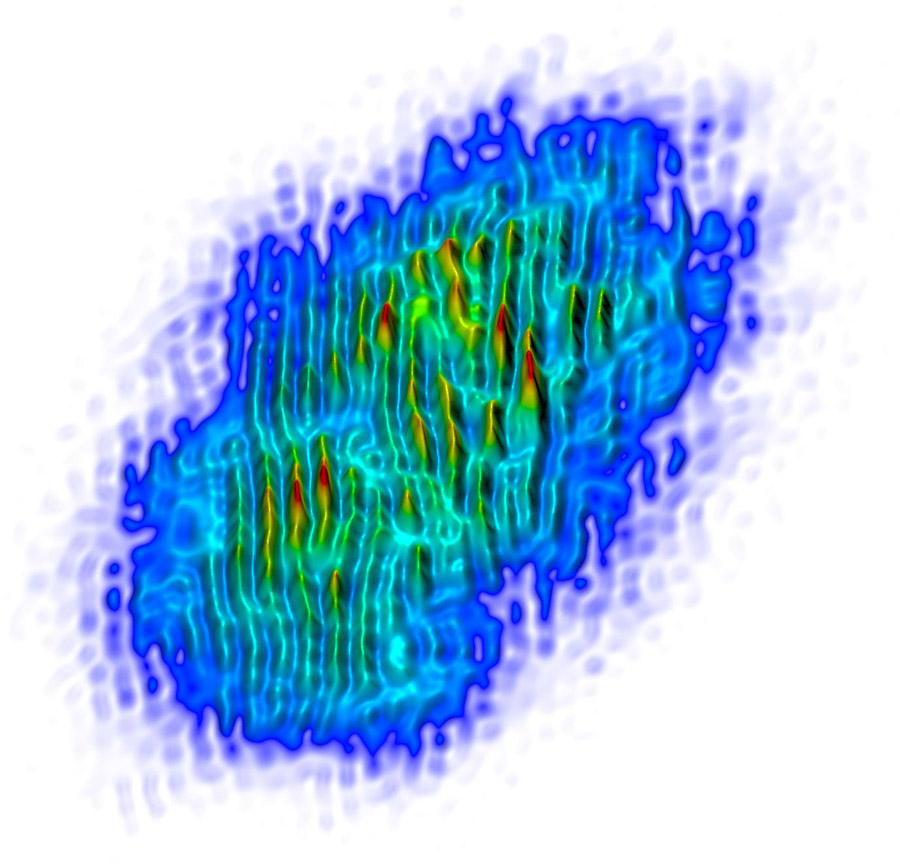 Figure 1. A real-space interferogram obtained from the emission of a polariton Bose-Einstein condensate using a Michelson interferometer. The interference fringe pattern shows the coherence over the whole spot of about 50μm diameter. Non-parallel fringes are a signature of condensate excitations, and the color coding represents the local emission intensity.

A peculiar and non-intuitive finding is that the BEC transition in our sample occurs only at high temperatures (>150K), as opposed to the norm, where the critical excitation density scales with temperature. This is due to the absence of efficient thermalization at low temperatures. By contrast, the same polymer in a conventional laser structure in the weak coupling regime shows a decreasing lasing threshold as we reduce the temperature.6 This highlights the difference between the polariton BEC and a conventional laser that operates far from thermal equilibrium, although both share properties, such as coherent light emission with nonlinear intensity increase and sudden line narrowing.

Now that we have realized a polariton BEC at ambient conditions using a radically simplified fabrication technique, we plan to engineer photonic energy landscapes.7 These would access a simple route to experimentally explore non-equilibrium BEC physics and therefore to model interesting quantum physical phenomena.

Thilo Stöferle received his PhD from ETH Zurich in 2005 for the investigation of Bose-Einstein condensates and degenerate Fermi gases in optical lattices. In 2006 he joined IBM Research–Zurich, where he is now working on highly efficient nanoscale components for integrated optical communication.

Rainer F. Mahrt received his PhD in 1991 and his habilitation in 1997 in physical chemistry from Marburg University. He was appointed as a group leader at the Max Plank Institute in 1999, and in 2001 he joined IBM Research–Zurich. His current research interests are optics of organic/inorganic hybrid systems in photonic band-gap structures.