Entangled photons represent an essential component of future quantum information technologies. When encoding quantum information, a particular degree of freedom is required for a single photon (e.g., polarization, path, or time-bin). In quantum communication, the time-bin mode (the time of arrival) of a single photon is especially important. Time-bin photonic qubits (quantum bits) are robust against a variety of decoherence effects that occur during long-distance fiber transmission.1 The biggest source of decoherence that occurs in transmissions such as these is polarization-mode dispersion. Because the qubit is encoded in the time-of-arrival degree of freedom, the time-bin qubit is resistant to this dispersion. 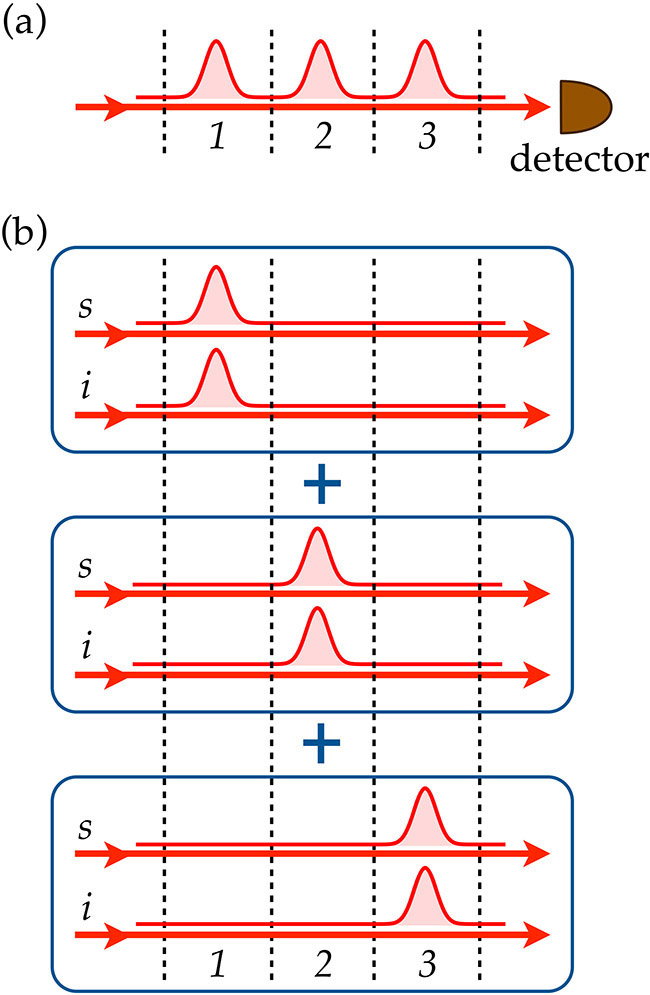 We generated time-bin-entangled photons using a process known as spontaneous parametric down-conversion (SPDC).2, 3 In this process, a nonlinear crystal is pumped with a laser diode, resulting in the creation of two photons with combined energies and momenta equal to those of the originating photon. Conventionally, the generation of time-bin-entangled photons placed strict requirements on pump laser operation, necessitating the use of either an ultrafast mode-locked laser or a single-mode continuous-wave laser. This made the overall cost of time-bin entanglement very expensive and its setup bulky.

We have developed a novel method for the generation of time-bin-entangled photons using an inexpensive, compact blue-violet diode laser of the type found in consumer electronics, for which the inventors were awarded the 2014 Nobel Prize in Physics. This inexpensive laser is capable of generating time-bin-entangled photons due to its frequency modes, which are distributed in a broad range with an equal interval between adjacent modes.

Figure 2(a) shows our schematic for the generation of time-bin-entangled photons.6 Due to its multi-mode frequency, a blue diode laser has an interesting coherence property. Although the laser field that it produces is a continuous wave, the field coherence repeats with a period determined by the distance between adjacent frequency modes.4 When the laser shines on a nonlinear crystal (e.g., beta-barium borate), a pair of photons (one referred to as ‘signal’ and the other ‘idler’) is generated simultaneously. This generated photon pair inherits the coherence revival property of the pump laser,5 i.e., the coherence of the signal-idler photon pair repeats with the same period of the coherence of the pump laser: see Figure 2(b). If we assign each coherent region to a specific time-bin mode, the repeating coherence of the photon pair indicates that the photons are simultaneously generated at time-bin 1, time-bin 2, or time-bin n, i.e., their arrival times are correlated. 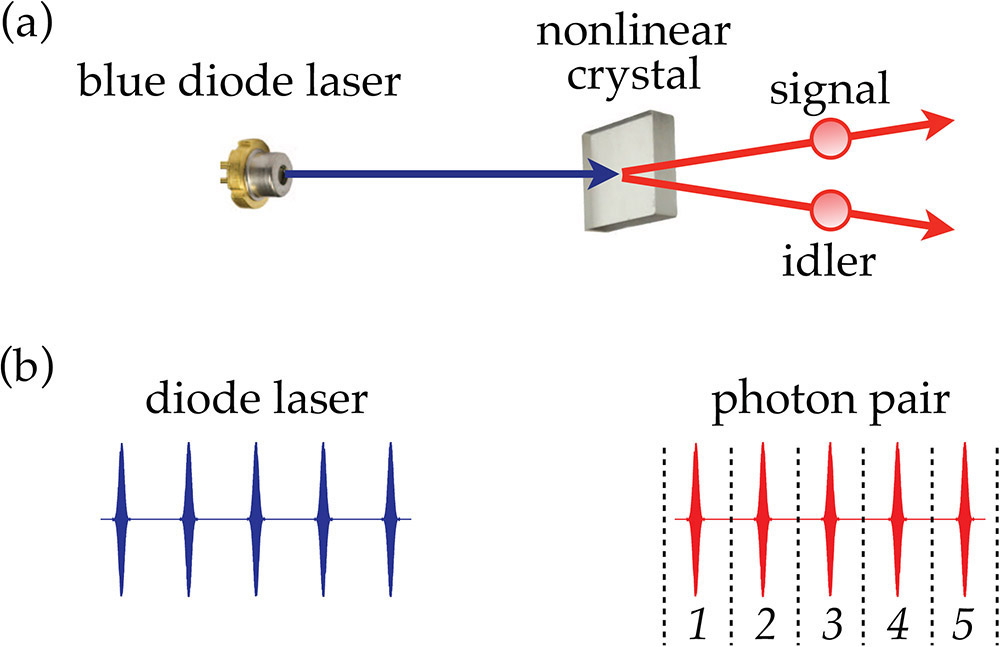 Figure 2. (a) Schematic for generating time-bin-entangled photons. (b) Coherence revival properties of a diode laser and a photon pair, which can be measured by interferometric setups. Note that the laser field is continuous-wave.4, 5

We employed a Franson interferometer to verify the time-bin entanglement of the signal-idler photon pair:6, 7 see Figure 3. This interferometer consists of long and short arms for the available paths of each photon. By varying the path length difference, it becomes possible to cause different biphoton time-bin modes to overlap at the beam splitters, and to observe the subsequent quantum interference between these biphoton time-bin modes. We observed high-visibility (>95%) quantum interference between different time-bin modes, confirming that our method enables the generation of time-bin entangled photon pairs. 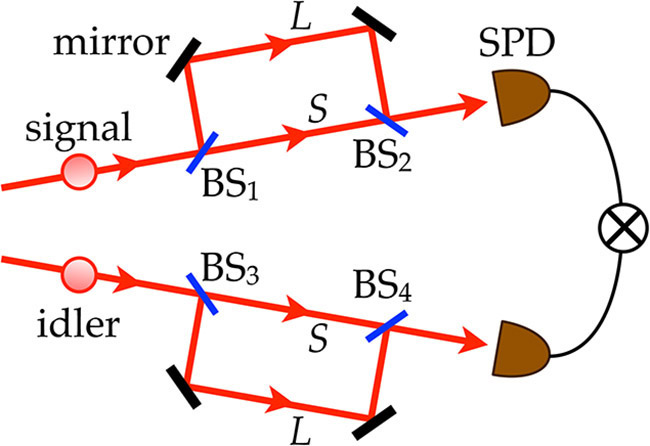 Figure 3. A Franson interferometer. At a beam splitter (BS1/BS3), each photon's path is branched into a long (L) path and a short (S) path. Path length difference between long and short paths is ΔL for both signal and idler photons. By varying ΔL, biphoton time-bin modes can be made to overlap at BS2/BS4, causing quantum interference. The photons are then detected at single-photon detectors, and the coincidence detection is recorded.

In summary, we have developed a novel method to generate time-bin-entangled photons from SPDC, pumped by a multi-mode blue diode laser. We believe that our method can provide a practical and cost-effective way to generate time-bin-entangled photons well-suited for quantum communication. We are currently developing a quantum key distribution system based on this scheme.

This work was supported in part by the National Research Foundation of Korea (grants 2013R1A2A1A01006029 and 2011-0021452). OK and YSK acknowledge support from the Korea Institute of Science and Technology Institutional Program (project 2E24013).

Yoon-Ho Kim received his PhD from the University of Maryland, Baltimore County, in 2001. He was then a Wigner Fellow at the Oak Ridge National Laboratory. Since 2004, he has been on the physics faculty of Pohang University of Science and Technology. He is presently serving as an associate editor of Optics Express.