Nematic liquid crystals (NLCs) are widely used in electro-optic applications because of their anisotropy. In a typical NLC, the molecules' long axes are on average aligned parallel to a single direction, called the director, which is also the optical axis of the NLC. Typically, a liquid crystal display is controlled by realigning the director with an external electric field. When the field is off, anisotropic molecular interactions at the bounding plates cause the director to relax back into the uniform state, in which finite birefringence of the NLC results in optical contrast. One of the principal difficulties is that the orientational relaxation of the director in the field-off state is a slow process limited by viscosity; the switch-off time is typically in the range of milliseconds. For applications such as ultrafast electro-optics, quantum computing, and secure communications, however, a nanosecond response time is required.

As a result, many research groups have explored ways to reduce the switching time, such as by optimizing the viscoelastic parameters of the NLCs, using overdriving schemes of switching,1 and placing the NLCs into polymer networks.2 These measures show improvements, reducing the response time to the millisecond and sometimes even submillisecond range. For example, a blue-phase polymer template filled with an NLC shows both switching on and off times within hundreds of microseconds2 in a broad (80°C) temperature range. Overcoming the submicrosecond and nanosecond barrier remains a challenge caused by the viscous nature of director reorientation.

We have proposed a new approach to NLC electro-optics3–5 that eliminates the director reorientation process. For example, in an NLC with a negative anisotropy of dielectric permittivity subject to an electric field that is applied perpendicularly to the director, the NLC molecules do not realign. Although the electric field does not reorient the director, it does cause other changes, by altering the degree of molecular order, the so-called order parameter. These changes can be divided into three different categories. The first is the induction of biaxial order, with the secondary axis parallel to the field. The second effect is in modification of uniaxial order in the plane perpendicular to the field. Finally, the electric field also modifies the spectrum of director fluctuations. The first two processes are extremely fast, developing within nanoseconds, which is why the effect is called nanosecond electric modification of the order parameter (NEMOP).3–5

All three mechanisms change the material's effective birefringence. To measure the electric-field-induced optic response, we used a standard optical scheme where a laser beam passes through crossed polarizers with the cell and an optic compensator between them; the transmitted intensity is measured by a detector with a subnanosecond response time.4 We sandwich the cell between two right prisms (see the inset in Figure 1) to set two geometries where only two out of the three mechanisms contribute to the optical signal. The biaxial and uniaxial contributions are both detectable in the BU geometry, when the director is aligned in the incidence plane, parallel to the z-axis shown in the inset. The uniaxial and fluctuative mechanisms both contribute in the UF geometry, when the director is perpendicular to the incidence plane (parallel to the y axis). By testing the planar NLC cell in different geometries, we have separated all three mechanisms and established their individual dynamics. Both uniaxial and biaxial changes are very fast, on the order of tens of nanoseconds: see Figure 1. Of the two, the biaxial order modification is faster, occurring in most NLC materials we studied on the timescale of 1–2ns. 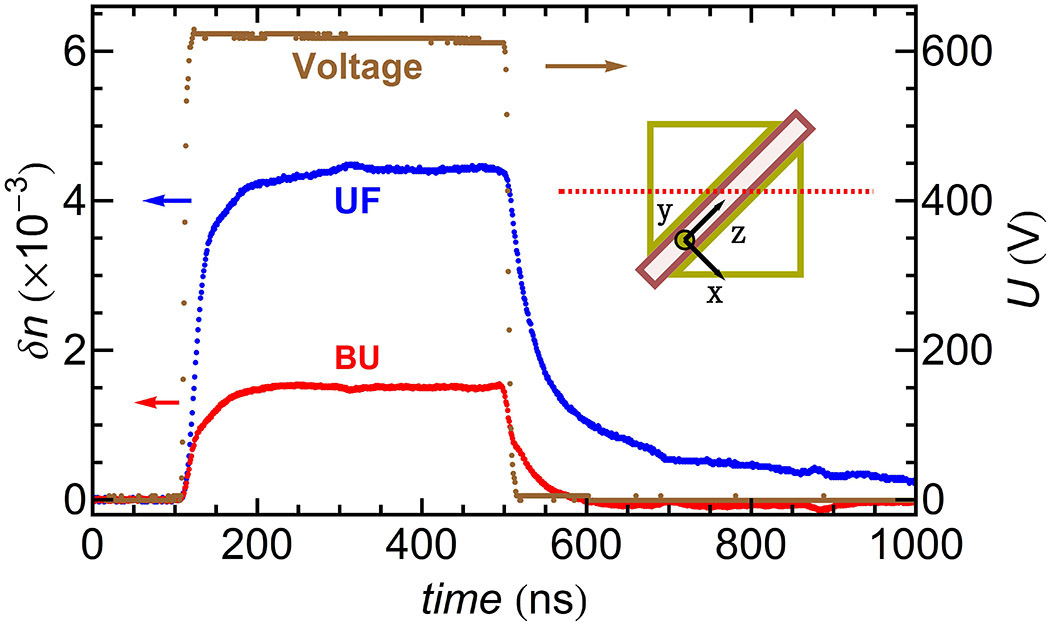 Figure 1. Dynamics of the field-induced birefringence (δn) of the nematic liquid crystal material known as CCN-47 in response to an applied voltage pulse (U) of amplitude 626V at 49°C. The inset shows the geometry of the experiment, in which the nematic cell with planar director (along the z-axis in the geometry BU, and along the y-axis in geometry UF) is probed with an oblique laser beam (red dashed line).

A nanosecond response in both the field-on and field-off switching is appealing for applications such as ultrafast electro-optics, quantum computing, and secure communications. A disadvantage is that NEMOP requires relatively high electric fields and produces relatively low birefringence. However, these problems can be overcome by a proper design of NLCs. For example, NLCs with strong anisotropy of dielectric and optical properties show high NEMOP birefringence on the order of 10−2.5 Our current research focuses on materials with positive dielectric anisotropy and on comparison of the NEMOP effect to its counterpart in isotropic fluids, known as the Kerr effect.

The work was supported by the Department of the Environment (DE-FG02-06ER 46331), the State of Ohio through the Ohio Development Services Agency and Ohio Third Frontier (TECG20140133), and by the China Scholarship Council. The content of this publication reflects the views of the authors and does not purport to reflect the views of either the Ohio Development Services Agency or the State of Ohio.

Oleg D. Lavrentovich received PhD and DSci degrees from the Institute of Physics of the Ukrainian Academy of Sciences. Before joining the Liquid Crystal Institute, he was a visiting scientist at the Université Paris-Sud, France. His research focuses on liquid crystals.

Bing-Xiang Li received his MS in optics (2012) from Gannan Normal University, China. He is a PhD candidate at Nanjing University of Aeronautics and Astronautics, China. He is currently a visiting student at the Liquid Crystal Institute.

Volodymyr Borshch received a PhD in chemical physics from Kent State University in 2014. Volodymyr's area of interest includes dielectric properties of liquid crystals, electro-optics, and ultrafast light modulators. Borshch has served as the President of the Kent State SPIE student chapter. In 2013, he was awarded an SPIE Optics and Photonics Education Scholarship.

Sergij V. Shiyanovskii received a PhD and DSci in theoretical physics from Taras Shevchenko Kyiv State University, Ukraine, in 1982 and 1994, respectively. He is a senior research associate and adjunct professor at the Liquid Crystal Institute and Chemical Physics Interdisciplinary Program, Kent State University.