A current debate among the CMOS and electronic and electronic-photonic integrated circuit communities centers on the idea that nanoplasmonic components cannot replace conventional electronics or their optical counterparts without a means of making silicon (Si) technology amenable to strong nonlinear plasmonic interactions. For monolithic integration with CMOS, silicon photonic devices must be reduced to dimensions that are below the diffraction limit, especially with the current 14nm feature size of modern nanoelectronics. However, the optical diffraction limit imposes a bound on radiation intensity, which restricts the attainable field strength necessary to exploit nonlinear processes in silicon-based devices. Consequently, bridging both CMOS electronics and silicon photonic technologies requires a new approach, such as nonlinear silicon nanoplasmonics. Nanoplasmonics enables waveguiding devices to achieve compact nanoscale footprints with dimensions below the diffraction limit of light. This would allow for high integration densities and access to nonlinear processes such as two-photon absorption, free-carrier absorption, Raman amplification, the optical Kerr effect, and four-wave mixing through high optical mode confinement. For these reasons, nanoplasmonics is believed to have great potential for the next generation of silicon-based optical computing.

Accessing a highly nonlinear field-matter regime entails the use of high-power laser sources. Recently, our attention has focused on high-field interactions in nanoscale systems without the need for such sources.1–5 In this respect, a strong-field nanoplasmonic phenomenon has emerged that brings extreme nonlinear light-matter interactions into the realm of nanoscale science. The development is revealing exciting new physics, in particular in the domain of solid-state systems, which will allow for the next generation of compact ultrafast optical signal processing.

We have demonstrated several intriguing nonlinear phenomena in semiconductor silicon nanoplasmonic waveguides that were previously restricted to high-field-plasma interactions. By coupling 1550nm, 80fs laser pulses to a silicon-loaded gold (Au) nanoplasmonic waveguide, we showed that photoexcited electrons inside the silicon can be accelerated to several electron volts of kinetic energy over a distance of only 30nm (see Figure 1). Since this interaction length is less than the scattering mean free path of the electron, electrons travel ballistically with negligible resistance. They also gain significant kinetic energy from the applied electric field within the duration of the nanoplasmonic field. The electrons' high kinetic energy is realized via the extreme spatial nanoconfinement and nanoplasmonic high field enhancement of the strong, ultrafast plasmonic field as well as the high-gradient (0.2GeV/m) ponderomotive potential (i.e., the potential energy that the electron experiences in a spatially inhomogeneous oscillating electromagnetic field) present at the silicon-gold interface. 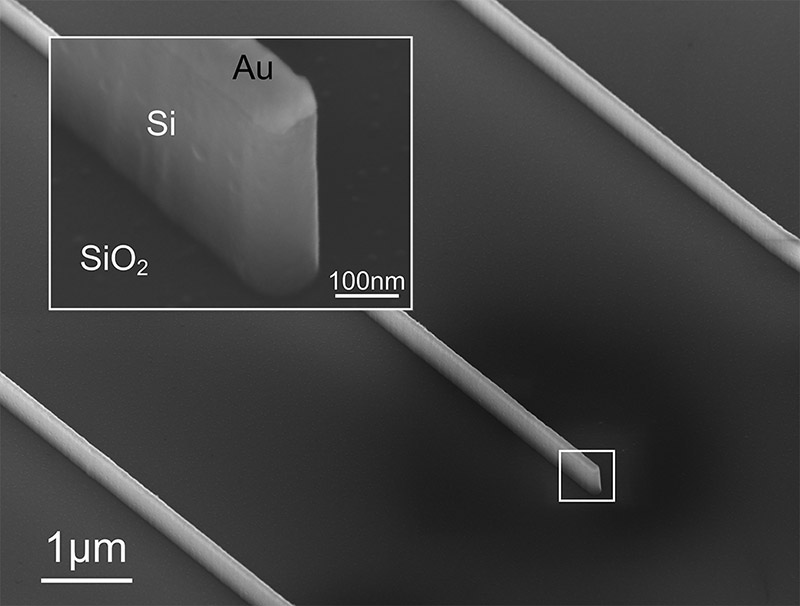 Figure 1. Scanning electron micrograph of the silicon (Si)-loaded gold (Au) nanoplasmonic waveguide. The structure is fabricated on a silicon-on-insulator wafer.

Figure 2(a) and (b) shows how electrons gain significant kinetic energy in the presence of a rapidly oscillating nanoplasmonic field. In the region where the field is spatially nonuniform, the field's restoring force at the extreme turning points becomes unequal. During cycle-by-cycle acceleration and deceleration phases, this difference yields a net ponderomotive force that acts on the electrons, moving them away toward the region of a weaker field with enough energy to escape the restoring force of the nanoplasmonic field: see Figure 2(b).

Figure 2. (a) Trajectories of a few representative electrons accelerated by the nanoplasmonic electric field. (b) Schematic depiction of relevant physical processes taking place at the Si-Au interface of the nanoplasmonic waveguide. Electrons are photoexcited from the valence band (VB) into the conduction band (CB) by two-photon absorption and accelerated by the ponderomotive force, Fpond, due to the nanoplasmonic field, Esp. Electron and hole populations increase due to avalanche multiplication by impact ionization. The dashed lines represent the cycle-by-cycle ponderomotive acceleration process of the photogenerated electrons. (Reproduced from Sederberg and Elezzabi, 2014.1)

For modest electric fields of 3–5V/nm, electrons reach energies of ∼3–5eV, and one can expect them to reside high in the direct-gap conduction band. These ponderomotively accelerated electrons recombine with holes (positive charge carriers) and emit visible photons. In this nanoplasmonic waveguide arrangement, we observe a bright broadband white-light emission covering the spectral range between 375 and 725nm: see Figure 3(a) and (b). The white-light emission signifies that electrons are being promoted high in the conduction band. As they recombine with holes in the valence band, bright white light is emitted. The broad spectrum resembles that of white-light emission from a reverse-biased, voltage-driven silicon diode and transistors. However, here the photogenerated electrons experience an effective electric field similar to that from an electrical source, except that it is driven by the nanoplasmonic field. To our knowledge, this phenomenon has not previously been observed in a solid. 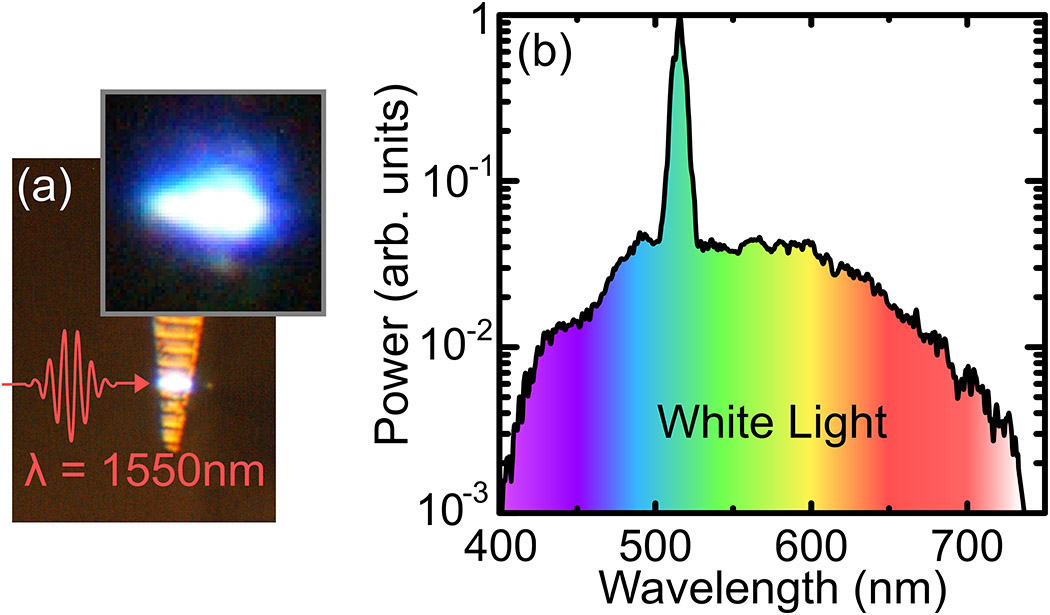 Figure 4 shows that the power of the emitted white light increases exponentially with the exciting laser optical power. The origin of this exponential growth is a phenomenon known as electron avalanche multiplication triggered by collision of the accelerated electrons and bound valance band electrons. Again, this highly nonlinear growth of the light emission is similar to electrically driven current avalanche growth in reverse-biased semiconductor junctions. 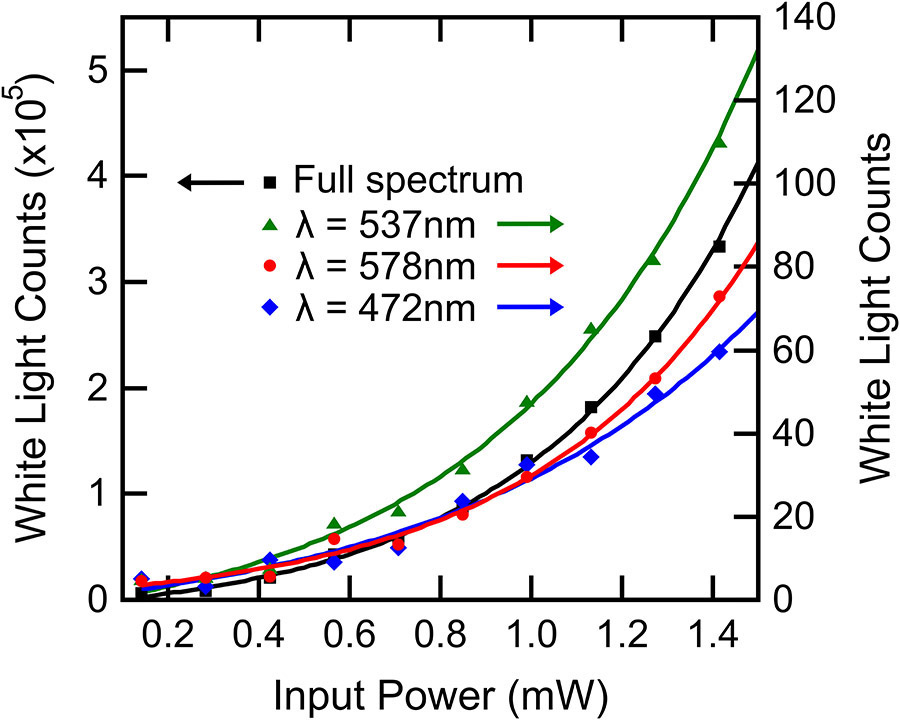 Figure 4. Measured power dependence of the emitted white light on the excitation power. The exponential behavior is evident at several wavelengths, which indicates that electrons and holes are generated by an avalanching process. (Reproduced from Sederberg and Elezzabi.1)

An interesting feature of this high-field phenomenon is that the photogenerated electrons are swept very quickly from the strong nanoplasmonic field. Using two-photon cross-polarized pump-probe experiments enables us to discern the ultrafast dynamics of the accelerated electrons. Figure 5 shows that the ultrafast nanoplasmonic electric field drives the electrons away from the silicon-gold interface very quickly, on a timescale of 1.98ps This timescale is several orders of magnitude faster than the intrinsic electron-hole recombination time in silicon, with implications for making nanoscale high-speed silicon photodetectors using ultrafast electron sweeping. 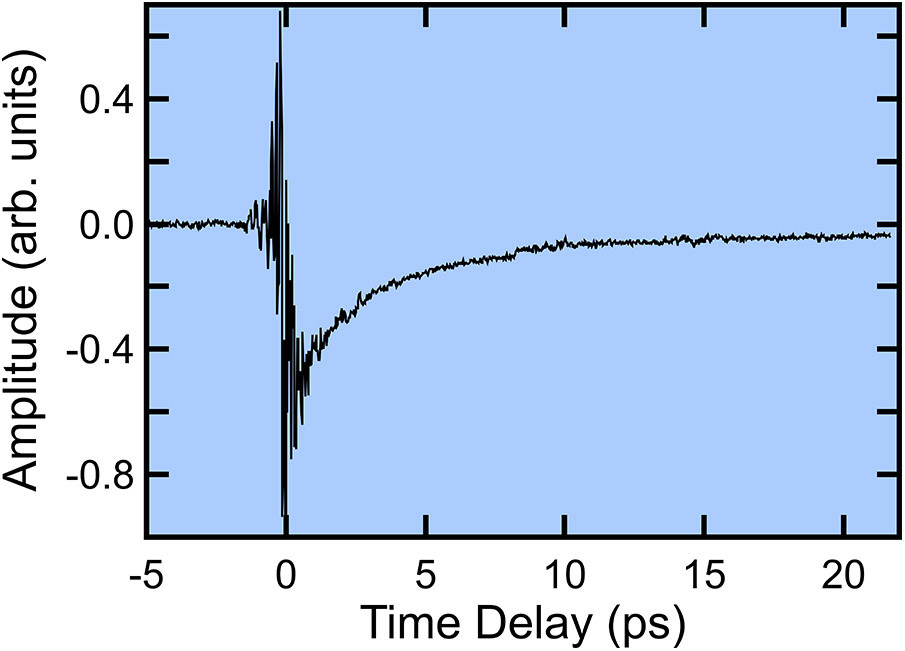 A further potential consequence of these phenomena is the development of ultrafast nanoplasmonic switching devices. Figure 6(a) shows a concept design of an ultrafast silicon nanoplasmonic ballistic triode. This device is an optically driven three-terminal nanometer transistor that is suitable for monolithic integration with CMOS technology. The photogenerated electrons in the silicon layer are ponderomotively accelerated toward the anode and are collected as an output current: see Figure 6(b). Similar to vacuum-tube triodes, when a negative voltage, Vg, is applied to the grid, the observed current varies nonlinearly with the applied voltage. We calculated that this ultracompact nanoplasmonic triode with a footprint of 0.07μm2 is capable of achieving an output current as high as 628mA/μm and can be switched on an ultrafast timescale of 150fs.

In the future, we envision that the next generation of electronic-photonic integrated circuits will combine electronic, photonic, and nanoplasmonic components on a single multifunctional chip. We believe our detailed physical understanding of extreme nonlinear interactions in nanoscale silicon-based plasmonic waveguides and its extension to CMOS-compatible devices constitutes a major step in this direction. Most important, the plasmonic device's size and the nonlinear interactions can be reduced to several nanometers, enabling optical nonlinearities at the scale of modern electronics. Visible white-light emission from silicon-based devices with dimensions similar to modern nanoelectronics is key to the next generation of optical signal processing. Our next step is to integrate this white-light emission with nanoelectronics for integrated nanodetectors and nanoscale light emitters.

Abdulhakem Elezzabi is a professor in the Department of Electrical and Computer Engineering, University of Alberta.

Shawn Greig is a PhD candidate in the Department of Electrical and Computer Engineering, University of Alberta.