An aerial display on which signage pops up has been realized using retro-reflective sheeting, an LED panel, and a half mirror.
27 February 2015
Hirotsugu Yamamoto

Futuristic aerial, transparent, and floating displays appear in science fiction movies, for example, the image of Princess Leia in Star Wars. We've been able to create such a screen-free display using a retro-reflector. In theory, forming an aerial image requires light scattering or light emitting in the air. Thus, mist can be used as a scattering screen to form a real image. Laser plasma also has been used to form an aerial display without a screen.1 But mist and laser plasma are not convenient for general users.

We have realized aerial LED signage using an easy (alignment-free), quick, and cost-effective imaging method. We realized that aerial displays will be explored for use in new fields of signage because they can be installed over roads without obstructing walking and traffic. For example, aerial displays enable traffic signs inside tunnels that do not interrupt airflow. Our approach forms an image of an LED panel in the air. The directivity of the image is sufficiently wide (well over 120 degrees), and it can be observed without an actual screen on the image plane.

Our imaging method employs retro-reflection to form this ‘real’ image.2 We named the method aerial imaging by retro-reflection (AIRR).3 The origin of AIRR is an optical system to invert pseudoscopic images. The method creates depth in a holographic display.4 S. Maekawa contended that the imaging method is not useful because of its low efficiency compared to imaging that uses a dihedral corner reflector array.5 However, our full-color LED panels recently performed with sufficiently high brightness. Furthermore, the LEDs in our scattering package have wide directivity in excess of 120 degrees full-width, half maximum. We have realized aerial signage using state-of-the-art LED panels that we developed.6, 7

The principle behind AIRR (see Figure 1) involves reflecting lights from an LED panel onto a half mirror and retro-reflective sheet. The sheet reflects the incident lights in the reverse direction. After this retro-reflection, half of the lights are reflected toward the light sources and the other half are transmitted through the half mirror. The transmitted lights cover plane-symmetrical positions of the LEDs with respect to the half mirror. The advantages of AIRR for aerial LED signage include alignment tolerance, wide directivity, and smooth LED dots. 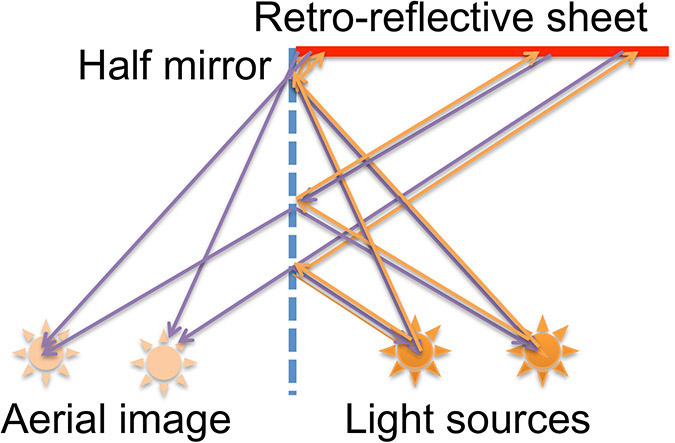 Figure 1. Principle of aerial imaging by retro-reflection (AIRR). Real images of the light sources are formed by a half mirror and retro-reflective sheet.

In one of our experiments (see Figure 2), the real image of an LED sign is formed in the air. By using a full-color LED panel, an aerial color figure can be formed inside a pair of hands (see Figure 3), which was recorded in a short video.8 Because AIRR forms a real image in 3D space, smooth motion parallax is perceived, so all viewers perceive the same depth for the floating aerial image. The aerial image position is independent of the curvature and location of the retro-reflector (see Figure 4). Even a retro-reflective fabric can form an aerial image, as shown in a short video.9 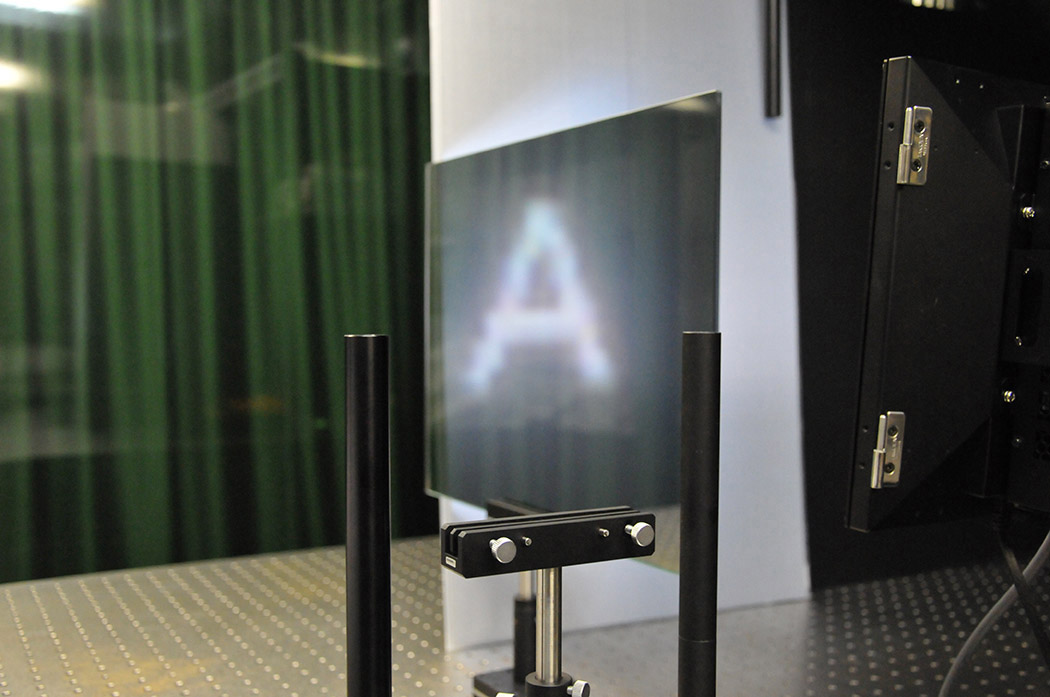 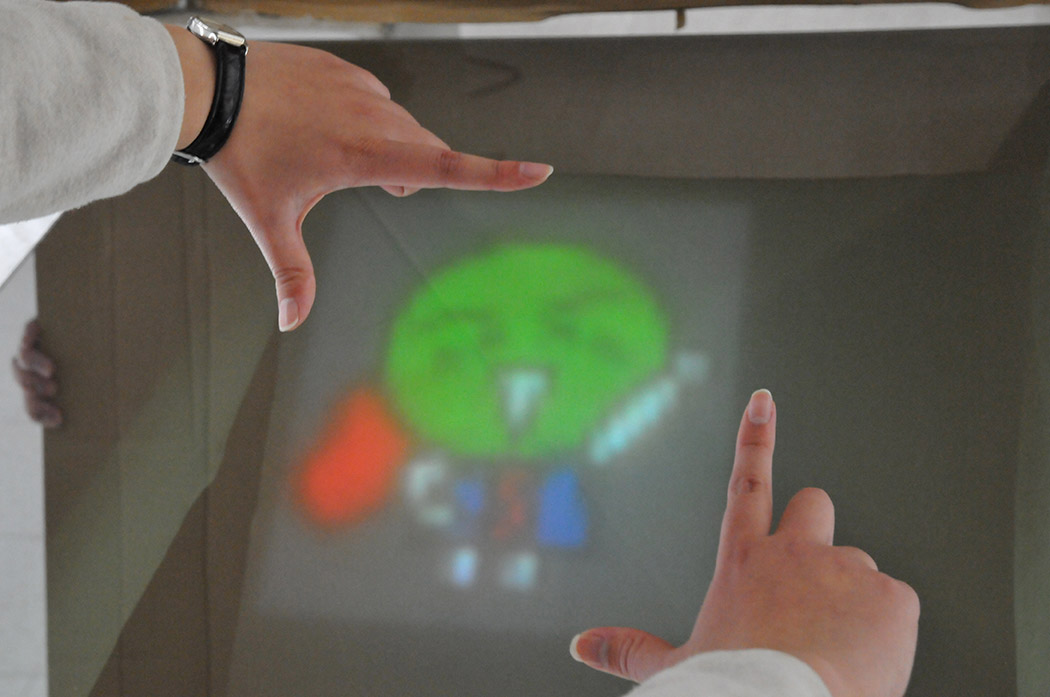 Figure 3. An aerial color figure floating in the air between hands. 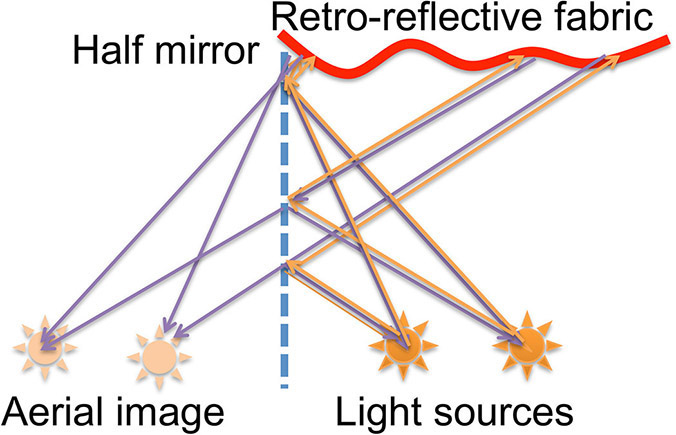 Figure 4. The alignment-free feature of AIRR. The position of the aerial image is the mirrored position of the light sources around the half mirror, and is independent from the curvature of the retro-reflector.

In summary, we proposed a screen-free display based on our AIRR model and have successfully realized a floating aerial LED sign using commercially available devices. The main advantages of our technique include an alignment-free feature, wide viewing angle, smoothing of LED dots, and scalability for large screens.

Our next steps include a large-scale, screen-free display that shows a human, an aerial 3D display that gives depth to the image, and practical applications such as car heads-up displays and digital signage.

This work has been partially supported by the Japan Science and Technology Agency's Core Research for Evolutional Science and Technology (CREST)funding program, the Japan Society for the Promotion of Science's "KAKENHI" Grants-in-Aid for Scientific Research 24656052. Our many collaborators are S. Suyama, who encouraged the author and discussed the possibilities of AIRR; Y. Tomiyama, who investigated imaging features of AIRR with M. Kuwahara; M. Yasui, who manufactured frames for the AIRR tablet; M. S. Alvissalim, who composed programs for gesture input; and M. Ishikawa, who discussed and directed the collaborative work on the AIRR Tablet.

Hirotsugu Yamamoto, associate professor, also is a visiting associate professor at the University of Tokushima and a sub-group leader at the ERATO MINOSHIMA Intelligent Optical Synthesizer Project of the Japan Science and Technology Agency. He received a Ph.D. from the University of Tokyo. His research interests include 3D displays, LED digital signage, and emerging information photonics.