In 2010 there were an estimated 21,880 new cases of ovarian cancer in the United States and 13,850 deaths. The five-year mortality rates for stage 3 and 4 (more advanced and metastatic, i.e., spread to other sites) cancers are 80–90%. More efficient screening tools and more effective treatments are needed to improve these outcomes. To develop these, we need a better understanding of the underlying cancer cell dynamics within the tumor micro-environment.

A characteristic of cancerous cells is that they move around the host tissue (migrate) and multiply abnormally fast (proliferate). In human ovarian cancer, a profound remodeling of the extracellular matrix (ECM) occurs and plays a role in the migration and proliferation. In the ovaries, the ECM has two layers. The cells adhere to a ∼50nm-thick basement membrane, which is composed of the proteins laminin and collagen IV arranged in lamellar sheets. This thin layer is linked to dense fibrillar collagen stroma (i.e., a dense framework of fibrous connective tissue made of collagen). ECM features are submicron in dimension and arranged in complex 3D patterns. Second harmonic generation (SHG) microscopy images of the collagen architecture in normal and malignant stroma are shown in Figure 1(a) and (c). The collagen fibers in the latter become longer, more aligned, and have an overall wavy pattern.1 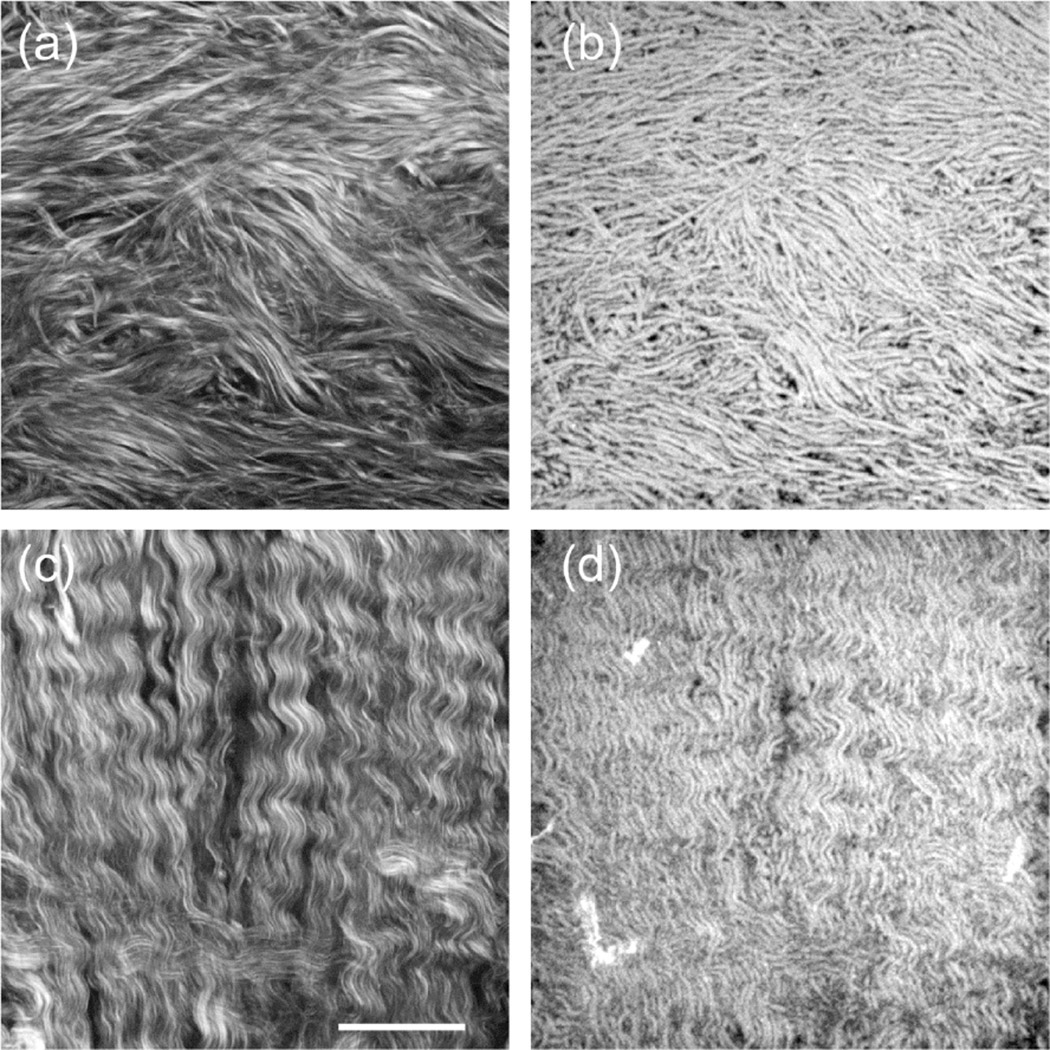 Dynamic studies of cancer cell–ECM interactions are clearly not possible in humans. The time and expense required to create different models and the intrinsic variability between specimens also makes them difficult in animals. This is further confounded for ovarian cancer, for which mouse models of human disease are not available. However, functional, biomimetic in vitro models that duplicate the native structure and composition could support such studies, which might lead to better therapies targeting adhesion and migration processes. These are important steps in ovarian cancer, as cells detaching from the basement membrane and reattaching in the bowel is the primary metastasis mechanism.

Various 2D and 3D techniques have been employed to study cell migration in cancer, each with strengths and weaknesses. For example, transwell chambers, in which cells attach to a coated membrane, have been used to study migration/invasion, as the membranes present some of the relevant biochemical cues.2However, these 2D substrates are not faithful models of the native ECM. The nanotopography and biochemistry of the ECM are important for cell adhesion, cell characteristics (e.g., shape and size), and migration, and these factors will affect invasion (spread of cancerous cells within the same site) and metastasis. The commercially available product Matrigel is fibrillar and so is often used for 3D studies, but its composition is not known and highly variable. Conventional means of forming soft and hard structured materials are limited in terms of 3D capabilities and choice of usable biological materials. To solve this problem, we have used multiphoton excited (MPE) polymerization to create scaffolds with complex, 3D submicron morphology directly from ECM proteins. We have demonstrated two such approaches to study ovarian cancer biology.

In addition to the effects of protein composition and morphology, cancer cell migration in response to insoluble gradients of ECM proteins (e.g., laminin and fibronectin) also may be important in invasion and metastasis. However, until now there have been no tools to create biomimetic gradients. We used MPE to fabricate covalently linked gradients from the basement membrane protein laminin.3We seeded these with a series of ovarian cancer cells of varying metastatic potential and studied the adhesion and migration dynamics over two-day periods. We found the adhesion/migration dynamics arose from the combined effects of ECM cues and contact guidance, which are separable using these fabricated constructs. We also found that small changes of gradient slope could significantly affect the observed migration. In addition, the shape of the cell type affected the response to the gradient in terms of speed, directed migration, and cell alignment.

We further used MPE to fabricate 3D biomimetic models of the fibrillar stroma, where the design blueprint is derived directly from high-resolution SHG microscopy images of the collagen architecture. To do this, we used a new form of instrument control, named modulated raster scanning.4Here rapid laser shuttering (∼10MHz) is used to directly map the eight-bit grayscale image data to the resulting protein concentration in the fabricated scaffold. We then created 3D constructs by layering single optical sections.

Figure 1 shows examples with representative single optical sections of both the original SHG images (normal and malignant ovarian stroma as found in the human body) with the corresponding two-photon excited images of the structures we fabricated using MPE from a gelatin-methacrylate conjugate representing collagen. We defined the fidelity between the image and model in terms of area coverage and relative concentration (reflected by grayscale in the respective SHG image and two-photon fluorescence image of the construct) and found it was ∼95% in each case.

We seeded the respective models with different cancer cell lines and normal cells, which allowed us to decouple the roles of cell characteristics (metastatic potential) and ECM structure and composition (normal versus cancerous stroma). We found the malignant stroma structure promoted enhanced migration, cytoskeletal alignment, and also proliferation for normal and all cancer cells. This suggests the ECM morphology is more important than the cell characteristics. However, it is important to note that the malignant ECM was highly remodeled in the tumor. We also created synthetic fiber patterns inspired by a series of normal tissues and cancers of varying stages, each characterized by a unique fiber shape and/or alignment. We also seeded these with a series of cancer cells. These studies found the wavy fiber patterns seen in Figure 1(c) provide enhanced migration and proliferation.

These hypothesis-driven studies on ovarian cancer adhesion/migration dynamics using MPE-fabricated constructs are not possible by other fabrication methods including lithographies or conventional 3D printing. We will next probe the role of different molecular species, such as proteases, that have been implicated in ovarian cancer in 2D studies but not investigated with biomimetic models. We suggest the method will enable a variety of studies in cancer biology.

Paul J. Campagnola is a professor of biomedical engineering and medical physics. He studies structural and functional aspects of the extracellular matrix and has developed optical microscopy and fabrication tools to study problems in basic science as well as those with translational potential.