For many industrial processes, catalytic conversion is indispensible for reducing energy consumption, pollution, and unwanted side products. The majority of technical processes are heterogeneously catalyzed, and heterogeneous catalysts are important components in systems for exhaust gas cleaning and energy conversion or storage. Recently, nanomaterials, which often exhibit different properties from the bulk material, have attracted attention as potentially cheaper and more efficient catalysts. We have prepared a variety of heterogeneous nanoparticle catalysts on carrier particles. We used pulsed laser ablation in liquid and investigated the influence of factors such as ligands, pH, ionic strength, and ligand surface coverage on adsorption efficiency to titanium dioxide supports.1, 2

Colloidal nanoparticles offer fascinating possibilities for investigating new functional heterogeneous catalysts. The surfaces of nanomaterials such as gold or platinum nanoparticles, which are synthesized by reducing precursors, are usually covered by surfactants. However, these can reduce or even prevent catalytic activity. As a result, extensive and expensive purification methods (such as thermal treatment, centrifugation, and solvent extraction) are required.3–5 However, quantitative removal of the surfactants is very challenging. Furthermore, sintering or agglomeration, which modify the nanoparticle properties, often take place, limiting follow-up treatments.

In contrast, highly pure nanoparticles can be fabricated by pulsed laser ablation of a bulk target in liquid (see Figure 1). This permits rapid nanomaterial design and can be applied to a variety of materials and solvents. In addition, such plasma-induced nanoparticle formation positively charges the nanoparticles' surfaces, stabilizing them electrostatically without surfactants. The effective charge of nanoparticles in colloidal solution is measured by the zeta potential. Using a saline solution during the laser ablation also delivers a surface charge from anions, enabling control of the particle size.6 The increase in surface charge density also raises the nanoparticles' electrostatic stability.6, 7 Furthermore, electrostatic repulsion prevents nanoparticle agglomeration and enhances colloidal stability.

Figure 1. Laser ablation of a gold target in a solvent (left) and colloidal solutions with gold, silver, and nickel nanoparticles (right).

We fabricated ligand-free nanoparticles in this way as prospective materials for a variety of energy applications such as photo- and electrocatalysis. The absence of ligands may increase the catalytic activity. Furthermore, it has a positive effect on the affinity of the nanoparticles to substrate surfaces and so improves nanoparticle adsorption.2 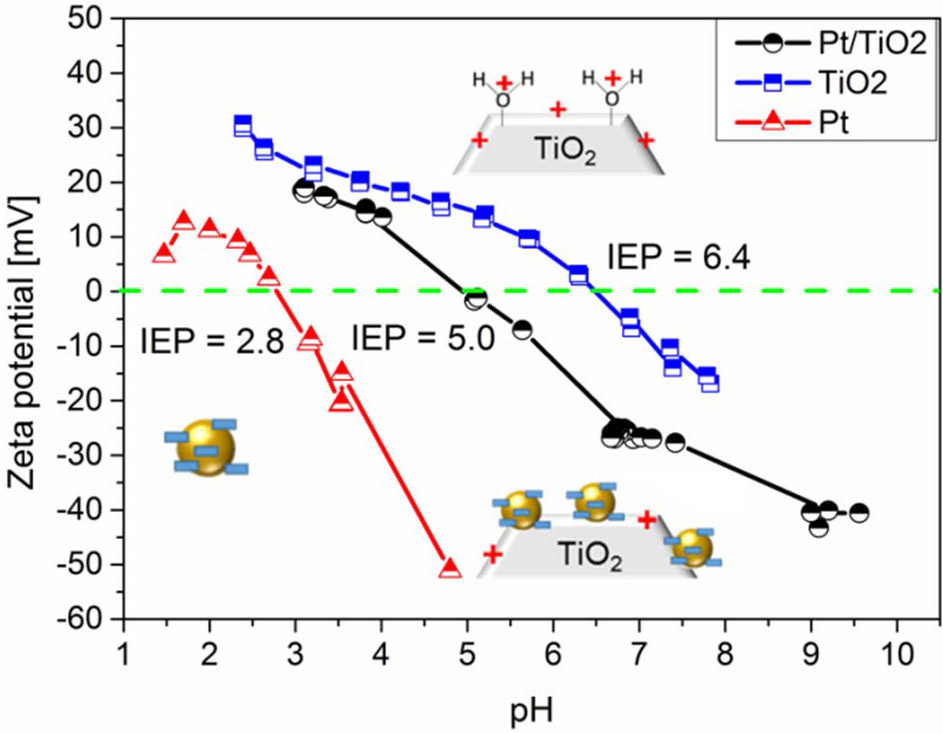 In summary, it is straightforward to prepare heterogeneous catalysts with a variety of nanoparticles and carrier materials for several applications provided their IEPs are known. Diverse nanoparticle materials can be synthesized by pulsed laser ablation in the desired solvent with high surface purity. We are now studying laser-based synthesis of alloy nanoparticles to replace scarce and expensive platinum metal in fuel cells. At the same time, we are examining how to scale up this method for industrial applications.