Data transfer rates of 50Mb/s have been achieved from the International Space Station in diverse day and night conditions.
27 January 2015
Abhijit Biswas

The transfer of ever higher data volumes from space is required for Earth and planetary remote sensing, human space exploration, and commercial satellite service applications. Optical communication techniques—in which data is modulated onto laser beams—can achieve much higher data rates than traditional radio-frequency methods and can satisfy this demand. Recent experiments1, 2 have successfully demonstrated that key technical risks associated with optical communication methods can be overcome. In addition, these experiments have underscored the potential data explosion that is possible with optical communications. Work, however, is ongoing to optimize these operations at an affordable cost.

Through a training program at the Jet Propulsion Laboratory (JPL), a group of early career hire engineers—mentored by regular staff—have developed a new space-to-ground optical communications system from the International Space Station (ISS), in low-Earth orbit (LEO). In this program a low-cost approach has been adopted that excludes redundancy and accepts the risk of space-radiation effects. The greatest challenge for this project is to maintain an accurate line-of-sight (LOS) between the ISS and the ground station during overflights.

Our project is known as the Optical Payload for Lasercomm Science (OPALS).3–6 With OPALS, we successfully established 18 optical links from the ISS to the Optical Communications Telescope Laboratory (OCTL)7 at JPL between May and October 2014. The key steps in our procedure have been deploying a flight system (FS) on the ISS, readying a ground system (GS) for the OCTL, implementing a mission operations system—through the Huntsville Operations Support Center at NASA's Marshall Space Flight Center—to coordinate FS and GS operational activities, and conducting link operations.

During our tests, we transferred error-free high-definition videos, text files, and test patterns at rates of 50Mb/s with a 1550nm downlink laser. Through our OPALS demonstration, we achieved the first known direct-detection daytime links from a LEO spacecraft. Our project has also involved the first use of an air-cooled commercial off-the-shelf electronics and laser system in space, and it has been the first unpressurized cargo launched to the ISS (on the SpaceX Dragon module). We have demonstrated the ability to maintain LOS between the FS and GS while transmitting 1 milliradian wide laser beams to and from space. This is achieved in the presence of uncertain ISS platform disturbances and with angular slew rates of about 1°/s.

To initiate a link with OPALS, time-stamped predictions are generated for the FS and GS so that they can ‘blind’ point to each other. The 976nm laser—transmitted by the GS—illuminates the FS using these predictions. The FS then senses the 976nm laser by blind pointing the wide-field-of-view CCD camera, which is mounted on a two-axis gimbal. We center the laser spot image on the camera by controlling the gimbal. This ensures that the downlink laser collimator—co-boresighted to the camera—is pointed back at the OCTL. Our operations concept is depicted in Figure 1. Once the GS and FS detect each other's lasers, the two systems transition to closed-loop control, and LOS is maintained for the duration of the link. OPALS flight rules ensure that no ISS structure or docked module is ever illuminated by the downlink laser. This restricts contact times to between 40 and 203s for OCTL overflights. 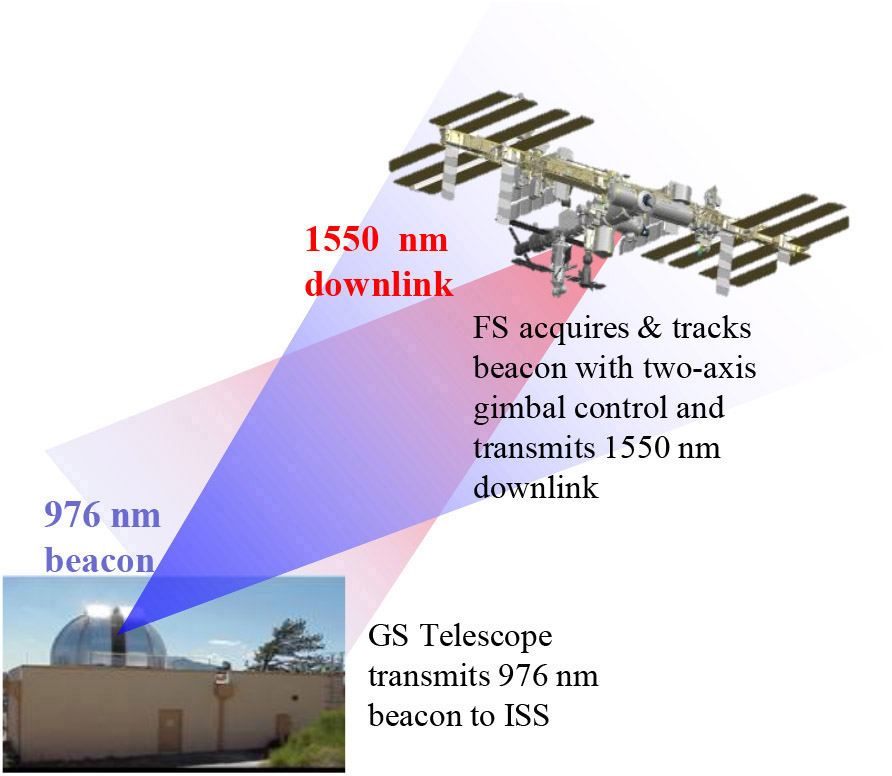 The FS gimbal, optical head (camera and laser collimator), sealed container, and radiator are shown in Figure 2, mounted on the Flight Releasable Attachment Mechanism (FRAM). The FRAM provides mechanical, power, and data interfaces to the ISS, and can be deployed robotically. The sealed container that we have designed houses avionics, laser, and power supplies, as well as fans to circulate air and allow excess heat to be radiated away. During an OPALS downlink, the FS records the signal strength and laser spot position on the camera, along with all the other monitored FS parameters. The GS, likewise, records the received downlink power and stores the digital data for post-processing (decoding). 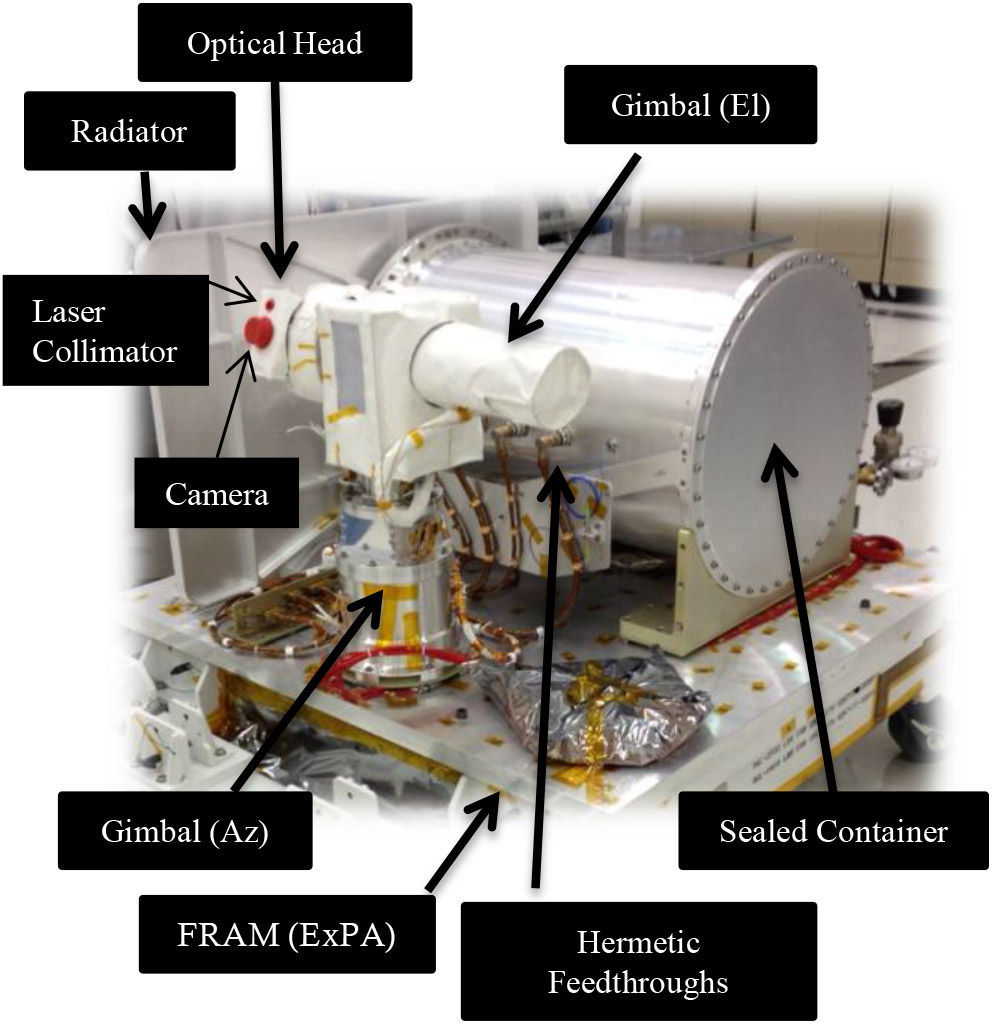 We have demonstrated optical communications from the ISS with the OPALS project. We have taken advantage of the generous allocation of resources on the ISS to implement a cost-effective design. The success of our project clearly indicates that our acquisition and tracking approach is robust and can be extended to a cost-effective approach for advancing multi-gigabit per second optical communications from LEO satellites. The OPALS FS continues to operate well, and we are currently planning future link experiments for early 2015.

We acknowledge the efforts of the entire OPALS team, their mentors, and ISS support staff. The work described in this article was conducted at the Jet Propulsion Laboratory, California Institute of Technology, under contract with NASA.