Spectral and spatial aggregation for high-throughput data transmission and networking

It is not possible to increase throughput per channel significantly. Therefore, one solution is to increase the networking granularity from a single WDM channel to a group of them. The aggregated channels together are known as a ‘ superchannel,’ for which two dimensions are available: spectrum and space.3 A spectral superchannel is an aggregation of signals conveyed on adjacent carrier frequencies,4 and enables high-throughput transmission, component integration, and reduction in the number of switching components. A spatial superchannel is an aggregation of signals conveyed in the orthogonal spatial dimensions of a multi-core or a multi-mode fiber (MCF or MMF). Recent work has focused on spatial superchannels,5 demonstrating their potential to increase per-fiber throughput and enable component integration.

We define a spectral aggregation factor F as the number of channels combined in a spectral superchannel. In non-overlapping types, constituent channels have a symbol rate Rs and a spacing Δv sufficient to ensure negligible mutual interference between them. In overlapping spectral superchannels, the spacing between constituent channels is equal to the symbol rate Rs, so the spectral efficiency can be increased by a factor up to Δν/Rs as compared to a standard WDM system. 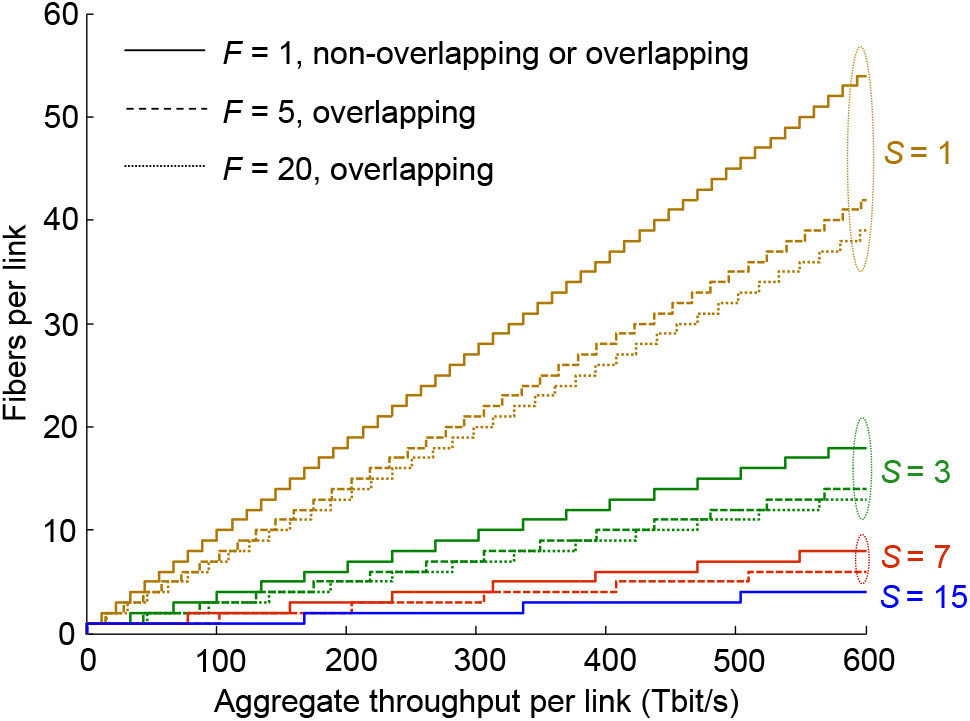 In high-performance ROADM nodes, wavelength-selective and multi-cast switches (WSSs and MCSs) are key components. A major challenge in scaling optical networks to high throughput is the limited number of ports available on WSSs and MCSs. By increasing switching granularity, we can reduce the number of components required to route a given throughput. Figure 2 shows how the switching capacity of six WSSs for SMF may be replaced by one WSS for a six-core MCF, or one WSS for a six-spatial-mode MMF.

Figure 2. Wavelength-selective switches (WSSs) for (a) six single-mode fibers, (b) one six-core multi-core fiber, and (c) one six-mode multi-mode fiber.

Figure 3 shows the number of switching components required at a node for various values of F and S as we scale the throughput per direction from 11 to 336Tbit/s. This 30-fold increase corresponds to the scaling that might be expected over the coming decade.1 By employing spectral and spatial aggregation with F=5 and S=10, we can accommodate this increase without substantially increasing the number of switching components per node.

Figure 3. Number of multi-cast switches (MCSs) and wavelength-selective switches required at a node for different spectral aggregation factors F and S, for aggregate throughputs per direction of (a) 11Tbit/s and (b) 336Tbit/s.

We have reviewed techniques for transmission and switching of spectrum- and space-aggregated network traffic. Our work has shown that these methods can cut complexity in network routing by reducing the number of fibers required per link and the number of switching components per node.

Our future research will focus on the flexible, efficient implementation of these methods in dynamic networks with highly variable traffic demands.

Joseph M. Kahn is a professor of electrical engineering, with research interests in communication and imaging through optical fibers, including modulation, detection, signal processing, and spatial multiplexing.