Measuring the mechanics of biofilms at multiple lengthscales

Biofilms are multicellular communities of sessile, interacting microbes that form infections readily on medical devices and in chronic wounds. The films can cause biofouling of industrial equipment, which reduces efficiency and increases wear, and removing them requires knowledge of their structure and mechanics. Biofilms have intrinsic structure on a range of lengthscales covering three or more orders of magnitude, from sub-micron bacterial appendages, to the hundreds or thousands of microns characterizing the biomass thickness of a mature biofilm. Although they can contain both prokaryote and eukaryote cells, in this review we focus on bacterial biofilms.

The mechanics of single bacterial structures affects their adhesivity, sensing, and the signaling that regulates their initiation. For mature biofilms, their mechanics impact their response to means of removal. Considering these structural varieties, researchers have developed different approaches to measuring the mechanics of surface-attached bacterial systems. Each of these methods is well adapted to some subset of the biologically relevant span of lengthscales.

Biofilm formation begins when single bacterial cells sense and attach to a surface, aided by motility appendages (flagella and pili).1 Extracellular polymeric substances (EPSs) are produced, and these increase the attachment and eventually form the biofilm matrix, giving the film its mechanical properties.2 Generally speaking, the means of bacterial adhesion to surfaces can be classed as either a slip or a catch bond. Slip bonds weaken and break as more external force is applied. Catch bonds are strengthened by increased external force that induces conformational changes in the binding proteins.3 As an example, for the pathogen P. aeruginosa, adhesion to a solid surface can increase levels of cyclic-di-GMP, an intracellular signaling molecule that triggers the transition to a biofilm state, and induces host-damaging virulence factors.4, 5 During infection, host immune cells such as neutrophils and macrophages attack biofilms by phagocytosing (engulfing and degrading) invaders. The mechanics of the biofilm matrix may prevent immune cells from migrating into and phagocytosing the film.2, 6

To make high-resolution measurements of adhesion forces on the single bacterium lengthscale, we can use atomic force microscopy (AFM). This technique uses the deflection of a cantilever, with a known bending stiffness, to quantify forces. We fix bacteria to the cantilever tip, which we then bring into contact with a surface. By retracting the cantilever and measuring deflection, we can determine the force of adhesion. Figure 1 shows a schematic of this approach, which we have used to measure the adhesion forces in P. aeruginosa, producing different EPS components.7 Other researchers have measured the adhesive force mediated by pili in P. aeruginosa8 and by EPSs and bacterial appendages in the pathogens S. epidermidis, S. aureus, and S. salivarius.9

Figure 1. Schematic of an experiment using an atomic force microscope cantilever to measure the forces of surface attachment. The cartoon is not drawn to scale: in reality, the bacteria are smaller than the cantilever by an order of magnitude or more. The distance over which polymers and/or appendages confer adhesion may be comparable to the cell length, as shown, or it may be smaller by an order of magnitude or more.

Other investigations—broadly categorized into static and flow assays—can quantify bacterial cell adhesion with higher throughput. In static assays, researchers expose a suspension of bacteria to a surface for a set period, after which they remove unadhered or weakly adhered bacteria by washing or gentle centrifugation, and then count the remaining cells. In flow assays they apply shear stress to adhered cells10–13 using several different experimental geometries, and tune that applied stress by varying the flow rate or the fluid viscosity. When used in concert with time-lapse microscopy, flow assays enable measurement of cell accumulation rates with high temporal resolution. The drawback is that many measurements apply to populations of cells, and thus provide limited insight into single-cell or sub-cellular mechanics.

Biofilms behave as elastic solids over short periods, but can flow like viscous fluids over longer times.14 Having both solid- and fluid-like mechanical properties gives biofilms a ‘ viscoelastic’ modulus with elastic and viscous components G' and G”, respectively. We can determine the viscoelastic properties of these biofilms from bulk measurements taken by an oscillatory rheometer15 (see Figure 2). Rheometers are either strain- or stress-controlled. A strain-controlled rheometer applies an oscillatory shear strain, γ=γ0sin(ωt), and the stress response of the material σ=σ0sin(ωt+δ)=γ0 [G ′ sin(ωt)+G ′′ cos(ωt)] provides a read-out, enabling us to determine G ′ and G ′′ . We used bulk rheometry with roughened tool geometry so that the biofilm stuck to the tool surface. We combined this with a solvent trap to prevent evaporation of water, to measure the contribution of different types of EPSs to the mechanics of P. aeruginosa biofilms. Researchers can also evaluate viscosity and elasticity by observing the deformation of a biofilm under varying flow shear conditions, as with the flow assay for single-cell mechanics.16, 17 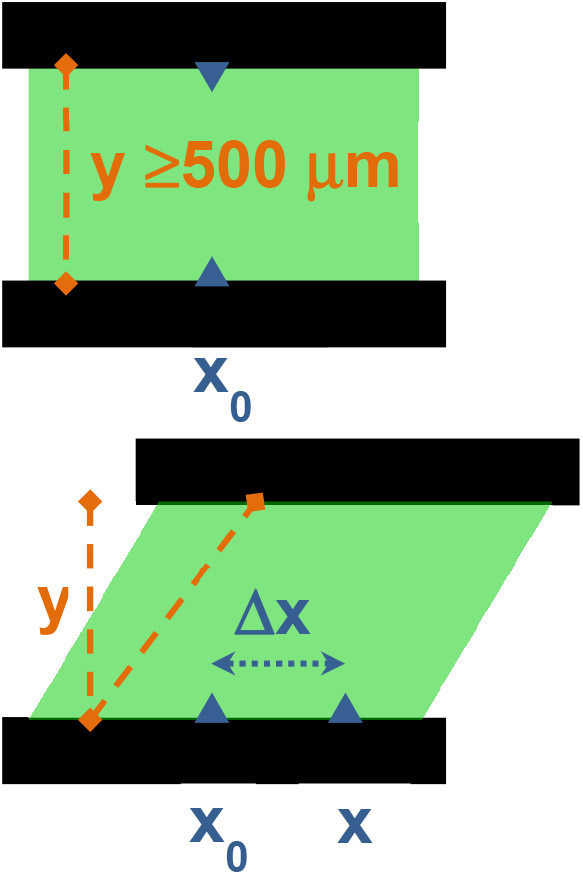 Figure 2. A cartoon schematic of strain-controlled rheology. The rheometer tool (here represented as two parallel, black plates) applies a shear to the biofilm (green). The shear strain is Δx/y and can range from less than 0.1% to more than 100%, depending on the material tested and the properties to be determined. For oscillatory rheology, the upper plate's position is a harmonic function of time, moving with an angular frequency that can range from less than 0.1 to greater than 1000 radians/second. The mechanical properties of the material tested may depend on the shear frequency, which controls the timescale available for the material to respond. For conventional rheometers, a gap width (y) of at least several hundred microns is required for accurate measurements. This thickness is over 100×larger than a bacterium and is more than 10×larger than many biofilms. Consequently, pooling of multiple biofilms for measurement is required. Specialized rheometers and tool geometries can reduce this limit.

While bulk mechanical properties do reveal important information about biofilm robustness and failure, the internal structure and composition of a biofilm—and therefore its mechanics—are heterogeneous. To quantify these inherent characteristics, researchers need to measure sub-portions, and for such a local mechanical response they can use microrheology (using a tracer to measure properties of the medium).

Passive microrheology uses thermally driven motion of exogenous beads to probe the viscoelasticity of each bead's microenvironment. Cameras image the motion of the beads under the microscope, and software18 identifies bead positions. For an elastic solid under sufficiently long observation, the mean square displacement 〈r2〉 of a tracer bead will plateau at a value that depends on the bead size, a, and the elastic modulus, G0, thus:

, where kBT is the thermal energy.19, 20 It is possible to extend this approach to characterize viscous and elastic properties and to characterize biofilms of E. coli and P. aeruginosa.21, 22 Alternatively, researchers can track the bacteria within the biofilm for both passive and active motion. Researchers have done this for P. aeruginosa and S. aureus biofilms to obtain a mean compliance throughout growth.23

Another method to measure the local mechanical strength uses an AFM probe to abrade the surface of a biofilm. By measuring the frictional force required to abrade some volume of the film by the AFM cantilever, researchers can determine the cohesive energy of each layer.25

It is widely known that mechanosensing is important for eukaryotic cells, but only recently has it been demonstrated for bacteria.4 The newness of this realization means that there is much to be learned about how bacteria sense and respond to mechanical interaction, and about how we might disrupt sensing and/or response to hinder the development of damaging biofilms. Using biological reporters or biosensors for real-time monitoring of gene expression in adhered cells will enable more insightful assays. Potentially, using microfluidics allows for more precisely tunable channel dimensions and flow rates.11 These impact shear stress and higher throughput in the form of multiple channels, enabling parallel measurements.

Understanding the resistance of biofilms to mechanical clearance will likely influence and improve approaches to their removal. Unfortunately, bulk rheology, which is the best standardized, most straightforward physical method, also oversimplifies complex biological systems that behave very differently in vitro than in vivo. Over time, well-informed, close interactions between biological and physical researchers should help provide a more complete picture of the intricate and complicated biofilm microenvironments that are key to bacterial survival. Developing methods for reliable rheological measurements on in vivo biofilms—or for diagnostics on ex vivo samples that reliably reflect their in vivo properties—are likely to open up new vistas for clinical approaches to treating biofilms. In future work, we hope to extend our methods of characterizing bacterial biomechanics to determine how mechanics impacts signaling and interactions with the immune system.

Kristin Kovach is a National Science Foundation graduate research fellow studying physics in Vernita Gordon's laboratory. She graduated with a BSc in physics from the University of Arkansas at Fayetteville. She is currently studying the mechanical properties of P. aeruginosa biofilms.

Megan Davis-Fields graduated from the University of Georgia with a BSc in microbiology. She is a teaching assistant and microbiology graduate student in Vernita Gordon's laboratory, and is currently researching P. aeruginosa biofilms and their mechanical interactions with the immune system.

Christopher Rodesney is a PhD candidate in the laboratory of Vernita Gordon. He earned his BSc in physics from Georgia Tech in 2012. In addition to experimental biophysics, he also enjoys sharing his research and general physics with broader audiences outside of science.

Vernita Gordon earned her PhD from Harvard and did postdoctoral work at the Universities of Edinburgh and Illinois, before joining the physics faculty at the University of Texas at Austin in 2010. She enjoys thinking about how the structure and mechanics of multicellular bacterial systems impinge on their biology, and how this perspective could lead to new approaches to treating disease.