A new structure of free-standing 1D porous silicon foils is configured to produce forces that are 500 times greater than conventional optical tweezers.

It has long been known that micro-objects can be manipulated using radiation pressure. For instance, optical tweezers can be used to levitate micro-organisms.1 Such instruments use a highly focused laser beam to create an attractive or repulsive force. When the laser power provided to the optical tweezers is 150mW, the maximum trapping force that can be achieved is on the order of 198pN.2 In addition, the rapid development of electromagnetic wave-driven micromotors has motivated investigations on their novel working principles.3 The radiation pressure produced with these motors, however, is normally too small to move large objects with practical relevance.4

Certain resonance principles can be used to significantly increase the force associated with electromagnetic wave-driven micromotors. First, a waveguide consisting of lossless dielectric blocks can be used.5, 6 A second approach is to use a Bragg waveguide that is based on a Fabry-Perot cavity.7 With this design, however, the radiation pressure tends to separate the structure and therefore causes a dramatic reduction in the force that is produced. In a third approach, a 1D photonics crystal (1-D-PC) with structural defects is used. A localized mode creates strong electromagnetic fields around the position of the defects, and the strong fields therefore enhance the forces on a lossy dielectric layer.4 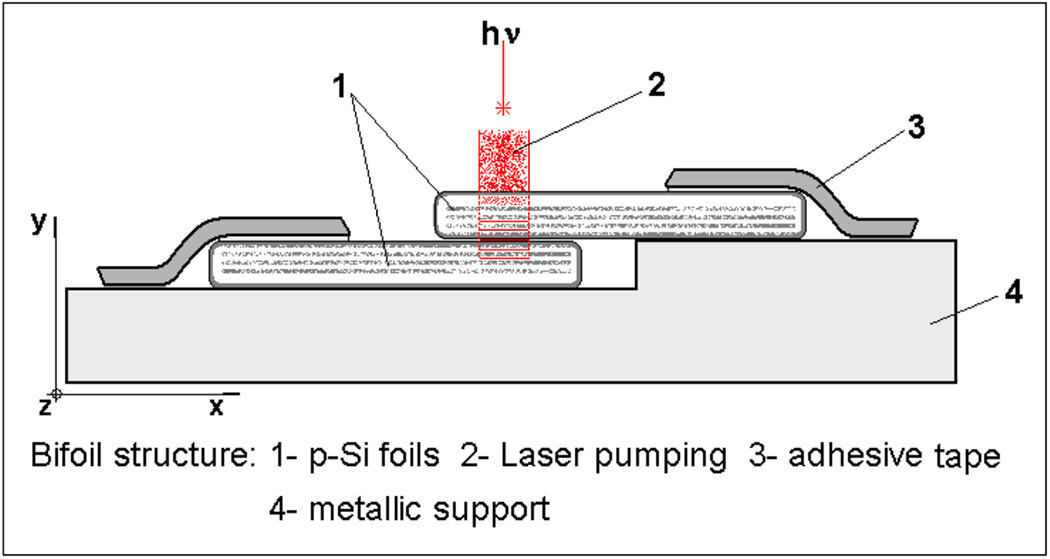 Figure 1. Structure of the two 1D photonic crystal foils, which are set up to create the photonic oscillator. To create the vibrating device, two pieces of these samples (the bifoil) need be placed in a mirror-like symmetry, with a gap left between them (the defect). hv: Laser light. p-Si: Porous silicon.

We have used the 1-D-PC approach to create a dynamical system that is capable of performing oscillations (e.g., automatic and forced oscillations). By making measurements on our device, we have been able to create a theoretical model from which we can estimate the magnitude of forces involved. The 1-D-PCs that we have fabricated are composed of alternating porous silicon layers.8 These layers have refractive index values of 1.1 and 2.0, and thicknesses of 326±11nm and 435±11nm, respectively. We chose these particular refractive indices so that they would work at the fourth photonic bandgap, where localized states can be excited with 633nm red light. The photonic structure of our crystals (bifoil) is illustrated in Figure 1. 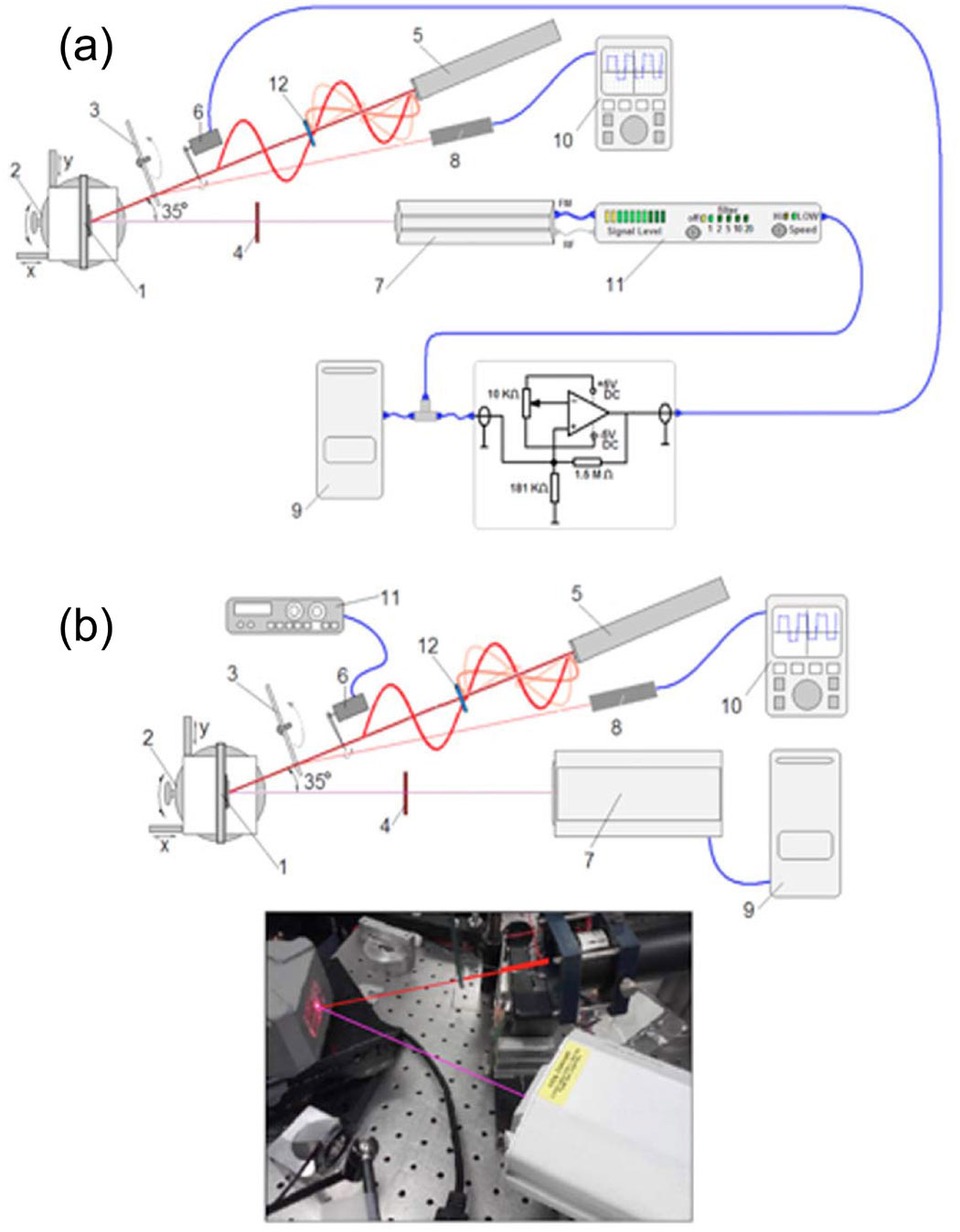 Figure 2. Experimental configurations for the (a) automatic and (b) forced oscillation experiments. A photograph of the setup is also shown. Numbered labels in both (a) and (b) mark the bifoil photodyne (1), rotary and linear XY stages (2), neutral filter wheel (3), IR band-pass filter (4), 633nm helium-neon laser (5), mechanical chopper (6), vibrometer laser (7), photocell (8), computer (9), oscilloscope (10), and linear polarizer (12). In (a) 11 marks the vibrometer interface, and in (b) it denotes the function generator. The circuit shown in (a) represents a Schmitt trigger.

We made auto-oscillation measurements using the configuration shown in Figure 2(a). This setup includes the bifoil device, a positive loop that is formed from the signal provided by a very sensitive vibration meter. This signal is processed through a Schmitt trigger circuit, which controls the output of the laser through a beam chopper. When the bifoil device starts to move, the chopper in the circuit immediately blocks the laser light. When the device returns to the initial position, it triggers the pumping laser again. Once the loop was excited and self-stabilized, the device oscillated at 16.1Hz, with a duty cycle of 52%. For the forced oscillation measurements—see Figure 2(b)—we opened the loop by removing the Schmitt trigger circuit and we added a function generator for chopper control. This generator has an offset signal to control the duty cycle set at 75% and a frequency of 9Hz. We kept the rest of the experimental setup the same, including the laser light power (13mW).

We can reproduce our experimental conditions with a mathematical model,9, 10 as follows:

where x is amplitude of the oscillation, t is time, m is mass, nlight is the duty cycle (0.5 for the auto-oscillation case), and j+1 is the number of cycles for which the light is turned on and off. The period (T) is related to the oscillator's frequency (ω) by T=2π/ω. The parameter 〈ax〉T is given by 〈Fx〉TA/mpsi, where mpsi is the bifoil mass, 〈Fx〉T is the surface electromagnetic force density, and A is the active bifoil surface area. 〈ax〉T can be obtained theoretically,9, 10 and for our experimental conditions it had a value of 0.308m/s2. A comparison between our experimental and theoretical results indicates that they are in good agreement (see Figure 3).

Since the parameter 〈ax〉T is given by 〈Fx〉TA/mpsi, and 〈Fx〉TA/mpsi and mpsi are known, we are able to estimate the electromagnetic force for different light powers given only the maximum displacement amplitude.10 We observe that the experimental relationship between the electromagnetic force and the light power is linear at high frequencies, but not at low frequencies (see Figure 4). At the lower frequencies, the bifoil structure is closer to a localized mode condition for a specific surface area. This is because the electromagnetic force and the theoretical values10 are on the same order of magnitude. For light with a wavelength of 633nm, optical power of 8.3mW, and a gap length of 8μm, there is a localized state condition that should create a force of 170nN. In our experiments conducted with these conditions, we produced a force of 110nN. 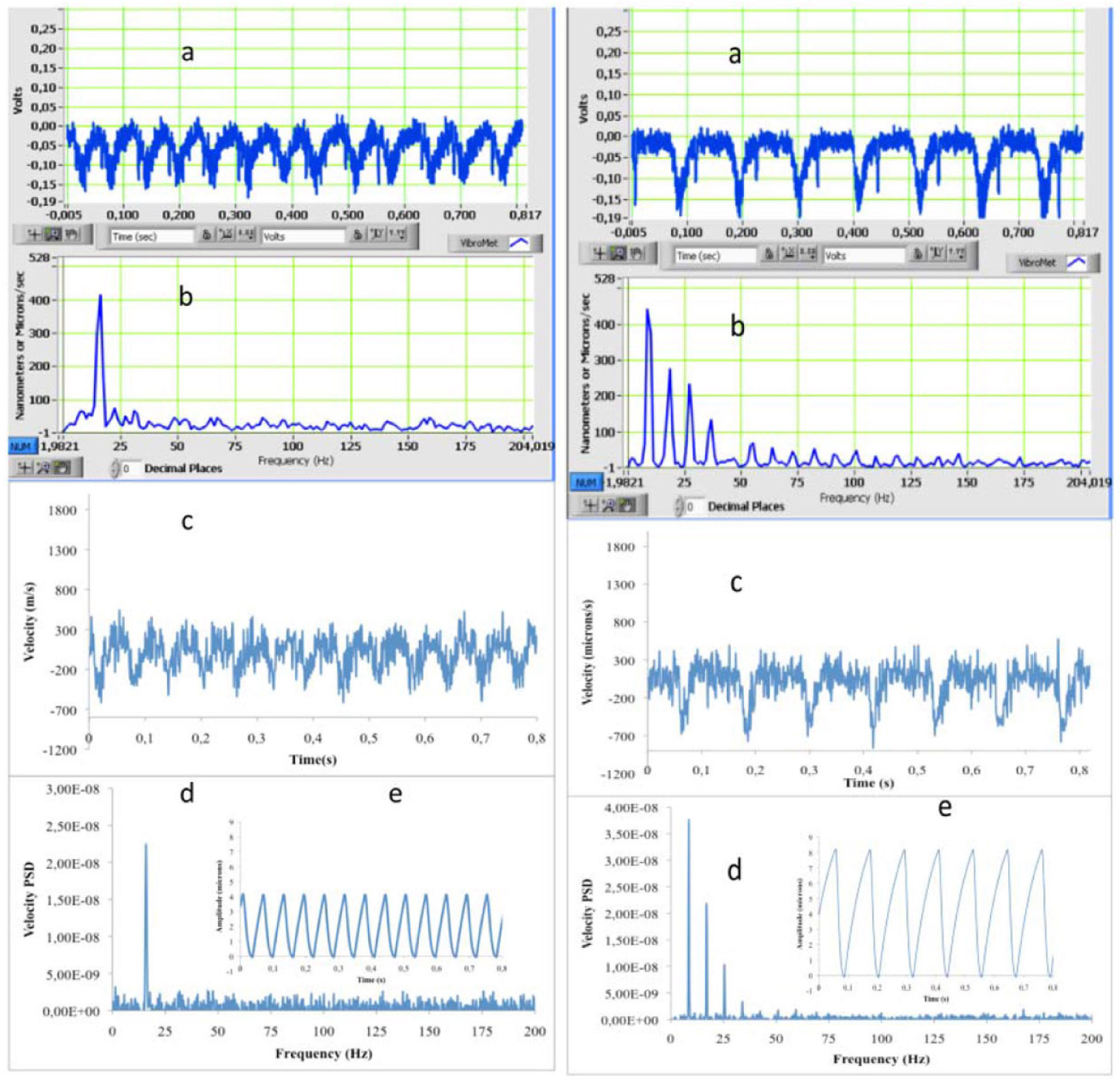 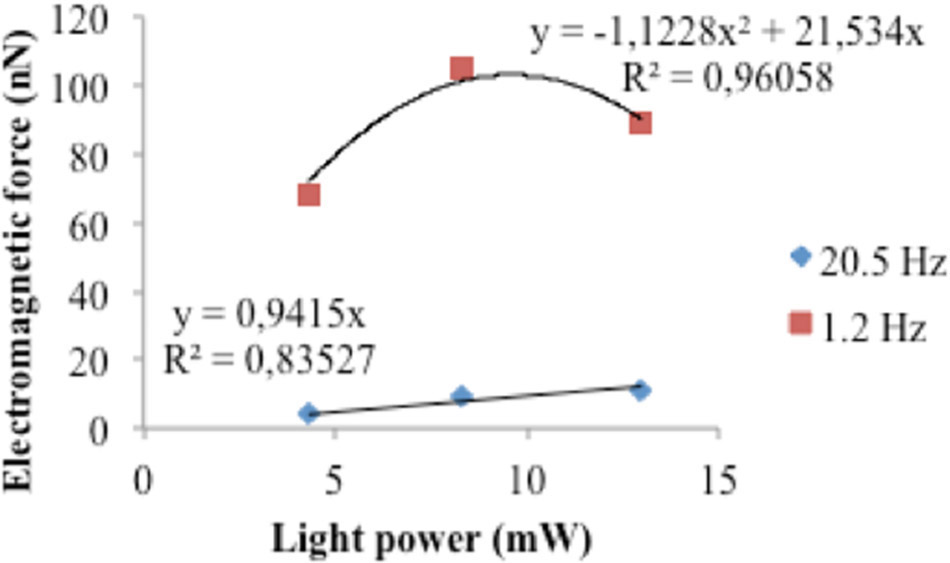 Figure 4. Relationship between the induced electromagnetic force and light power for two different forced frequencies (1.2 and 20.5Hz). At the higher frequencies, the behavior is linear, but not for the lower frequencies. R2: Coefficient of determination.

We have designed a 1D photonics crystal, with structural defects, to increase the electromagnetic force associated with electromagnetic wave-driven micromotors. We have experimentally verified our device and successfully induced automatic and forced oscillations in the structure. We have also produced a theoretical model of our setup, which we have calibrated so that the magnitude of the electromagnetic forces involved can be estimated. For forced oscillations at low frequencies, we have found that the force is about 555 times higher than that obtained with conventional optical tweezers (and using lower optical power). Our next step is to demonstrate fabrication of new devices that are activated only by light.

This work was supported by a Discovery operating grant from the Natural Sciences Engineering Research Council of Canada. We thank M. Beatriz de la Mora and J. Antonio del Rio for fabrication of the photonic crystal.