For decades, researchers have been striving to develop an efficient, stable, and cost-effective photocatalyst that can decompose water into its constituents (i.e., hydrogen and oxygen) by employing solar energy. This process, known as artificial photosynthesis, promises to be one of the key sustainable energy technologies of the future, enabling clean, storable, and affordable energy (i.e., hydrogen and other fuels) from just sunlight and water. Although significant progress has been made over the last decade, low yield, photocatalyst instability, and ineffective use of the solar spectrum represent the key bottlenecks standing in the way of the translation of this technology from research and development to the marketplace.

Researchers have thus far been largely focused on metal oxide-based photocatalysts, due to their photostability in aqueous solution. However, because of their large bandgap and poor optoelectronic properties, most metal oxides are incapable of harnessing visible solar photons, which comprise 43% of the solar spectrum. To overcome this issue, we have been working on the development of group III-nitride photocatalysts, which due to their tunable bandgaps are capable of harnessing the majority of the solar spectrum (200–2000nm). Additionally, III-nitride possesses near-perfect band-edge positions (its bandgap can straddle the redox potential of water) and extreme stability against photocorrosion. To enhance the effective reaction surface area, we have grown nearly defect-free 1D gallium nitride (GaN) and indium GaN (InGaN) nanowires with high surface-to-volume ratio by plasma-assisted molecular beam epitaxy (see Figure 1). 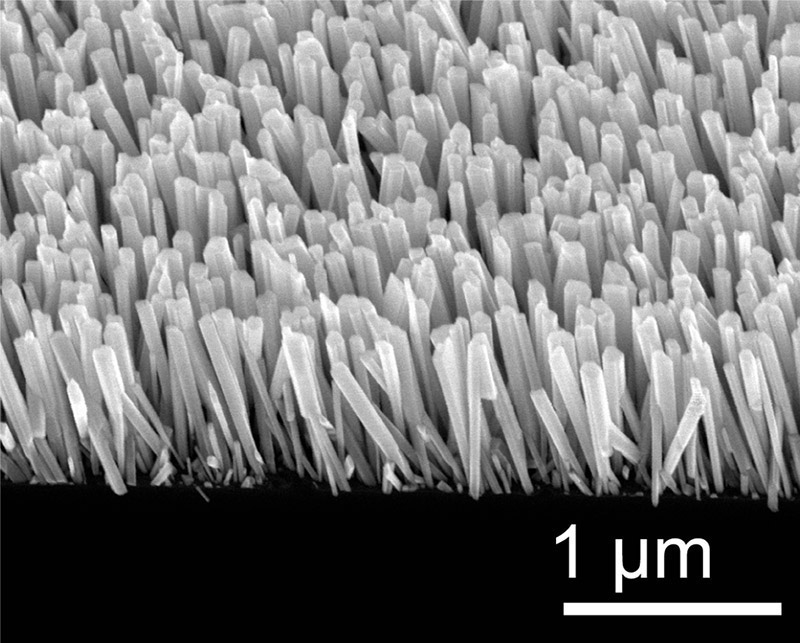 Although III-nitride materials have many ideal characteristics for solar water-splitting applications, they also possess drawbacks. Due to the presence of surface states and/or defects, the conduction and valence bands at the surface of these materials can be subject to upward or downward bending, caused by the depletion of electrons or holes, respectively. This poses a potential barrier for the diffusion of photogenerated electrons or holes toward the semiconductor-liquid interface, resulting in reduced efficiency. Either the oxidation or the reduction reaction is therefore greatly suppressed. Indeed, our recent studies on intrinsic GaN nanowires1 and multiband InGaN/GaN nanowires2 reveal that the quantum efficiency for overall water splitting (the simultaneous evolution of H2 and O2) is limited by the presence of upward band bending at the GaN and InGaN nanowire surface.

To address this issue, we developed magnesium-doped p-type GaN nanowires3 and have demonstrated that the near-surface band bending can be tuned by incorporating a controlled amount of p-type magnesium dopant. This leads to balanced, efficient, and stable overall water splitting under UV light irradiation. Our detailed x-ray photoelectron spectroscopy and micro-Raman analysis suggest that the near-surface band bending can be significantly reduced, and the n-type surfaces transformed into p-type surfaces, when optimal dopant concentrations are used. To further enhance the activity, we also incorporated rhodium/chromium oxide (Rh/Cr2O3) core/shell nanoparticles onto the nanowire surface as co-catalyst for a hydrogen evolution reaction (see Figure 2). This significantly enhances carrier separation and extraction toward the semiconductor-liquid interface and also reduces the overpotential for gas evolution. 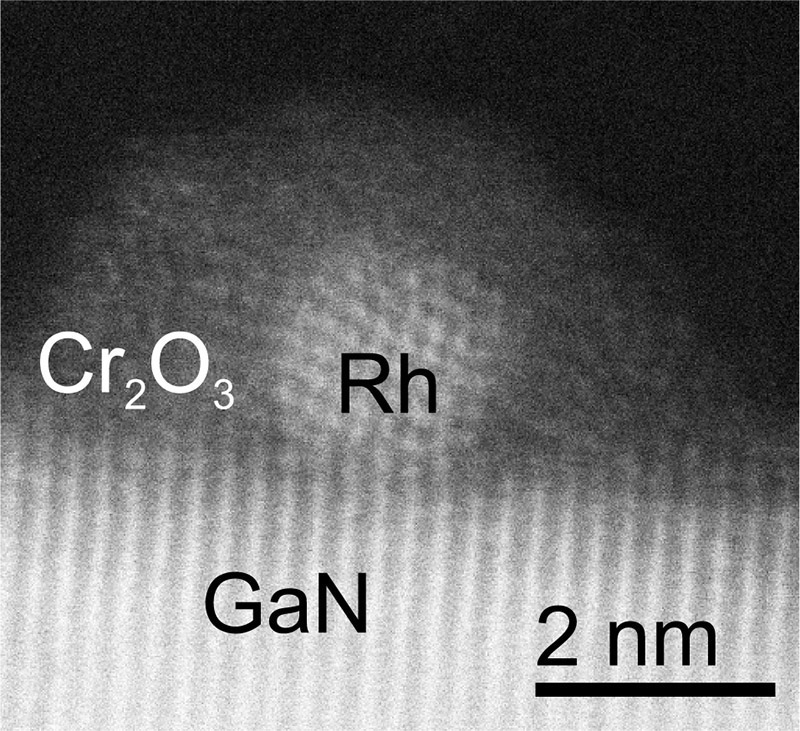 The overall water-splitting mechanism is illustrated in Figure 3. Figure 4 shows the evolution of H2 and O2 from neutral (∼7.0 pH) water splitting in a stoichiometric ratio (2:1), confirming the balanced redox reaction of water. Our studies demonstrate that the quantum efficiency of GaN nanowires can be enhanced by more than two orders of magnitude using p-type GaN, compared to its intrinsic counterpart, under UV irradiation. 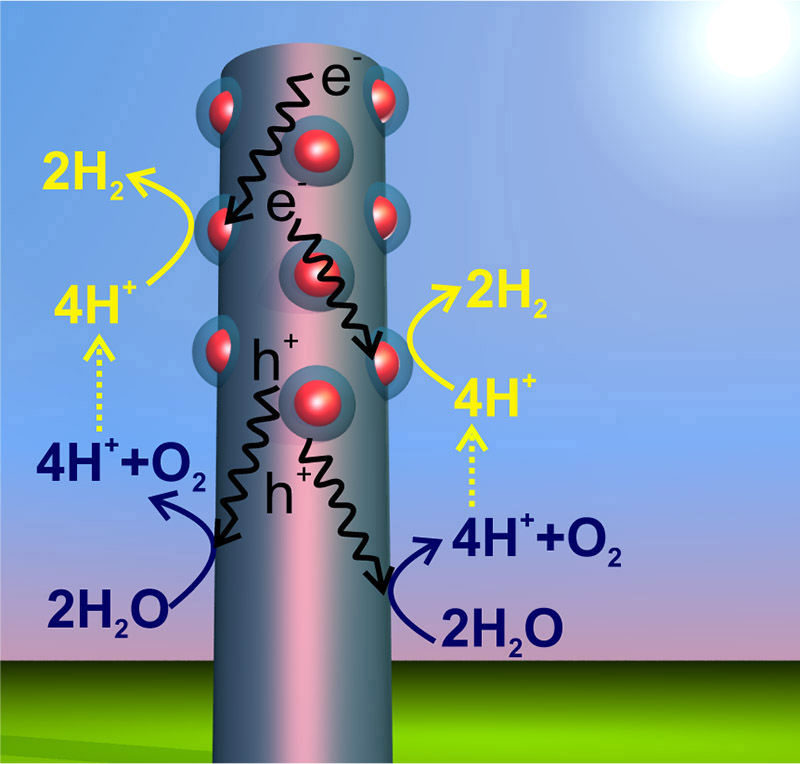 Figure 3. Schematic illustration of the water-splitting mechanism.3The photogenerated holes (h+) drive water oxidation on the nanowire surface to produce oxygen (O2) and protons (H+). Protons are subsequently reduced by the photogenerated electrons (e-) to produce H2 on the Rh/Cr2O3core/shell nanoparticles. 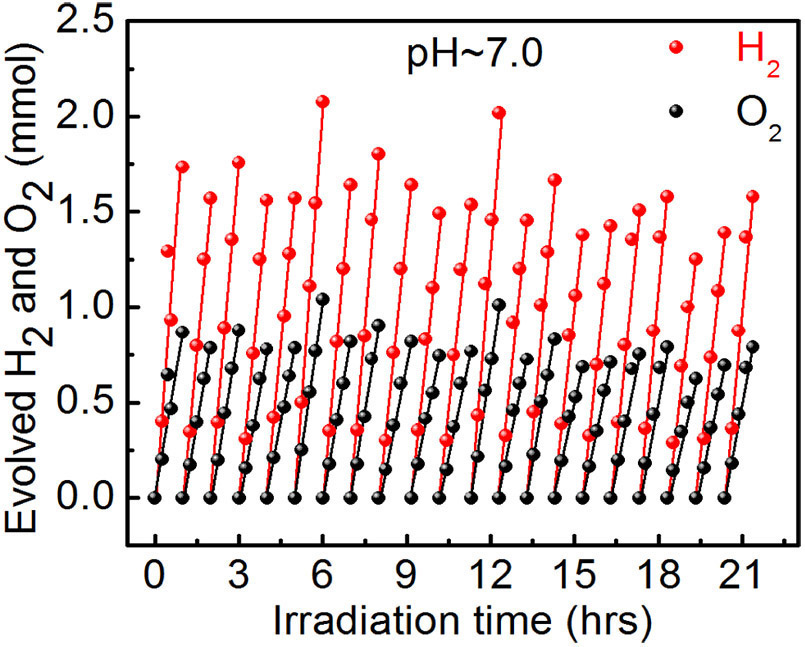 The internal quantum efficiency and activity of p-type GaN nanowires can reach ∼51% and ∼4.0mol hydrogen h−1 g−1, respectively. These are the highest values reported for spontaneous neutral water splitting under any broadband light irradiation to our knowledge. The stability of the magnesium-doped GaN nanowire photocatalyst is further confirmed by repeated cycles of overall water splitting and detailed scanning electron and transmission electron microscopy analysis. The nanowires remain nearly unchanged after the production of over 50,000μmol of gas (H2 and O2). This is more than 10,000 times the amount of photocatalyst itself (∼4.6μmol) used for the reaction.

In summary, our results reveal that group III-nitride nanowires represent a viable photocatalyst for solar-powered artificial photosynthesis in the generation of hydrogen and other solar fuels. Our GaN/InGaN nanowire photocatalyst, in which the near-surface band bending is optimized using a magnesium dopant for highly efficient overall water splitting, works under both UV and visible light (up to 475nm). The high efficiency and stability of these nanoscale photocatalysts bring this technology one step closer to solar fuel commercialization. We are now working toward the development of a water-splitting device capable of using the entire solar spectrum.

Md Golam Kibria received his BSc from Khulna University of Engineering and Technology, Bangladesh, in 2006, and his MSc from McMaster University, Canada, in 2010. He is currently a PhD candidate at McGill University. He received an Academic Gold Medal and Outstanding Student Paper Award at the 30th North American Molecular Beam Epitaxy (NAMBE) conference.

Faqrul Alam Chowdhury received his BSc from the Bangladesh University of Engineering and Technology in 2007 and his MSc in electrical engineering from the University of British Columbia, Canada, in 2012. He is currently a PhD researcher at McGill University and a Vanier (CGS) Scholar. He has also benefited from an Education Scholarship from SPIE Optics and Photonics.

Zetian Mi is an associate professor, William Dawson Scholar, and Hydro-Québec Nano-Engineering Scholar in the Department of Electrical and Computer Engineering at McGill University. He received the Young Investigator Award from the 27th NAMBE conference and the Christophe Pierre Award for Research Excellence at McGill.