Printing of living cells to produce 3D cell constructs is promising for tissue engineering and mimicking natural in vivo cell environments. Chemicals, pharmaceuticals, and cosmetics could be tested using printed human tissue instead of animals. Ultimately, printing of cells could be a key technology for producing complete functional replacement organs for transplantation. Another extremely useful printing technology is the printing of silicon nanoparticles with controlled shapes and sizes. These could be used in novel nanophotonic components such as nanolasers,1sensors,2 and metamaterials.3 However, a suitable printing method is needed to allow the generation and arrangement of these nanoparticles in a very precise manner. To tackle these challenging printing tasks, we have adapted two laser-induced transfer techniques: a forward transfer method for printing living cells, and a backward transfer method for the controlled generation and printing of single silicon (Si) nanoparticles.4, 5

Our approach allows printing of spherical Si nanoparticles onto a specific position of a receiver glass substrate (see Figure 1). The printed nanoparticles have a predefined size and are characterized by unique optical properties. With sizes of 100–200nm in diameter, they exhibit pronounced electric and magnetic dipole resonances within the visible spectral range. Due to these resonances, they appear colorful in a dark-field microscopic image. 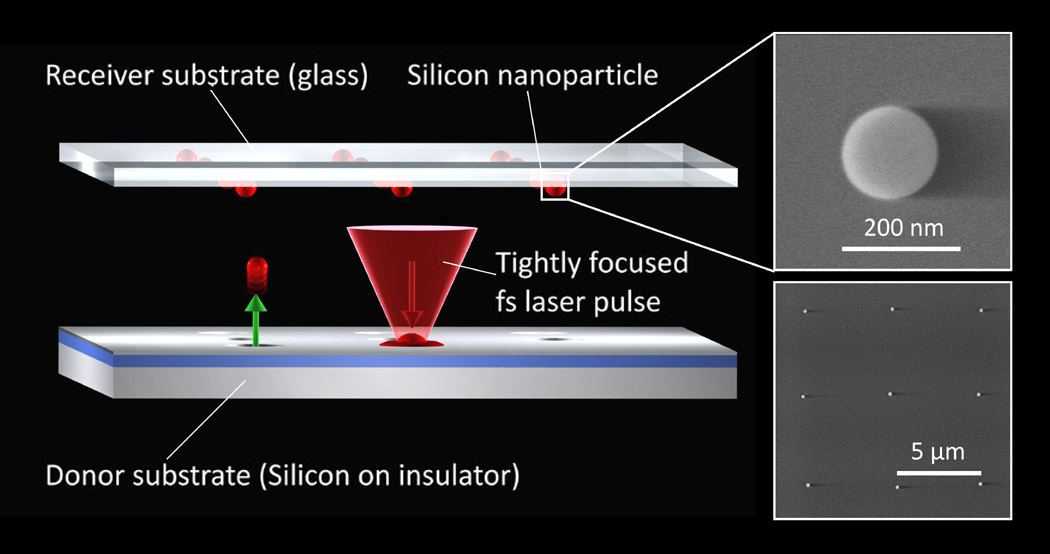 For the printing process, we focused single 50fs laser pulses at a wavelength of 780nm through a receiver glass substrate and onto a silicon-on-insulator (SOI) substrate (see Figure 1). This substrate consists of a 50nm crystalline silicon layer on a 200nm silicon dioxide layer with an underlying Si wafer substrate. Each laser pulse induces strongly localized melting in the silicon layer. Due to surface tension, the melted volume contracts into a sphere, which is ejected back toward the receiver glass substrate.

The spectral position of the nanoparticles' dipole resonances, as well as the scattering efficiency, depends strongly on the nanoparticles' material and crystallographic phase. The generated Si nanoparticles are initially in an amorphous phase and can be recrystallized by a second femtosecond laser pulse with a square-shaped flat top intensity distribution to get a homogenous intensity distribution, and thus a homogenous crystallization (see Figure 2). After this step, the optical response of the Si nanoparticles is much stronger and their color is different, indicating they are crystallized.4 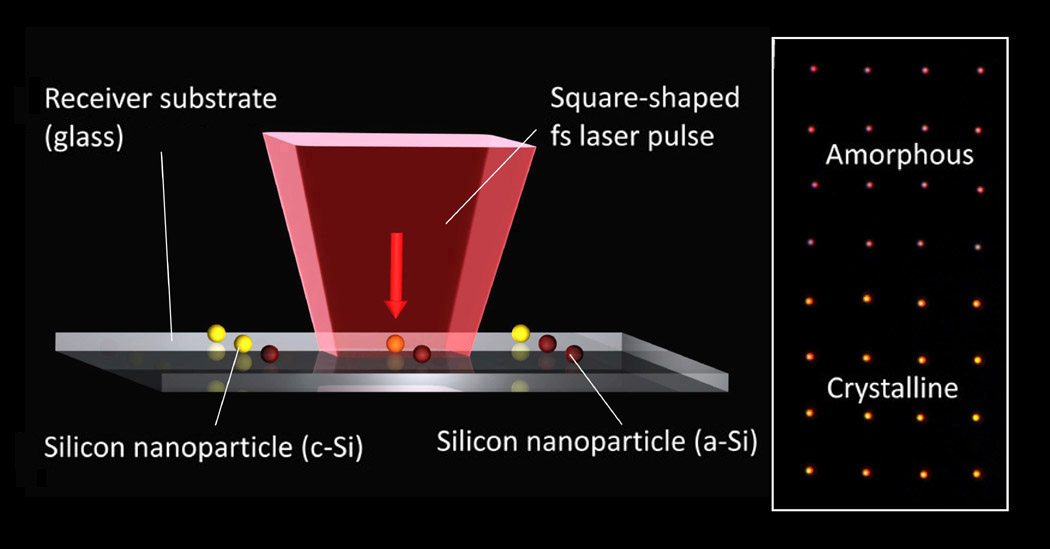 The forward transfer setup used for cell printing consists of a glass slide or transparent ribbon that is coated with a layer of a laser-absorbing material and a second layer of a biomaterial to be printed. Typically, this biomaterial layer is a hydrogel with embedded cells (see Figure 3). We mounted this coated glass slide upside-down and focused laser pulses through the slide into the absorption layer, which evaporates in the focal spot. The subjacent biomaterial is then propelled down (in the forward direction) by the vapor pressure and deposited as a droplet onto a surface located under the glass slide. By moving the glass slide and the laser beam focus, we can print any desired 2D and 3D patterns layer-by-layer. In this printing setup, we applied a laser with a 10ns pulse duration at a wavelength of 1064nm. 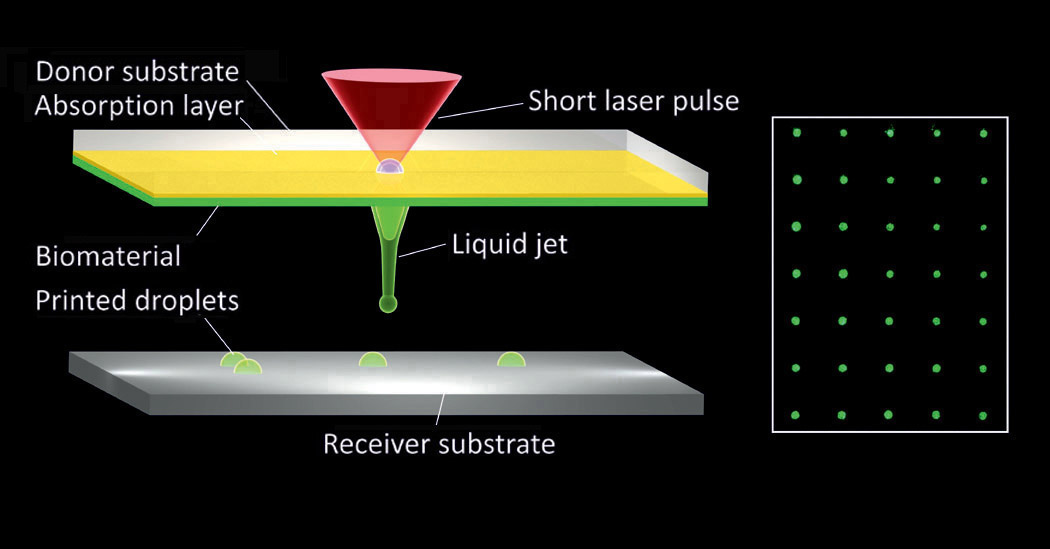 Figure 3. Laser printing of vital cells embedded in hydrogel. The focused laser pulses evaporate an absorption layer locally. The vapor pressure propels the subjacent biomaterial as a liquid jet toward the receiver substrate. The jet lasts for a few hundred microseconds and remains a droplet. The microscopic image (right) shows droplets with fluorescent cells.

In a series of publications, we proved that cells are not harmed by this printing process. For example, the differentiation behavior and potential of stem cells is not affected.6 Stem cells have been printed in defined patterns and then differentiated within these patterns toward bone, cartilage, or adipose tissue: see Figure 4 (left).7 With specific multicellular patterns, we can perform studies of cell-cell and cell-environment interactions. Using this technique, we have observed directed migration of adipose-derived stem cells toward endothelial cells and their interactions in establishing blood vessels.8 Furthermore, fibroblast and keratinocyte cells have been printed layer-by-layer to form 3D skin tissue constructs: see Figure 4 (right). We have proven skin tissue formation by visualizing intercellular junctions and verifying their functionality.9 We also have observed basal lamina formation. Implanted in mice, the printed skin constructs show an ingrowth of blood vessels and differentiation of the epidermal keratinocytes.10 Compared to nozzle-based printing techniques such as extrusion or ink-jet printing, laser printing of cells provides the higher resolution and cell densities required for tissue formation. 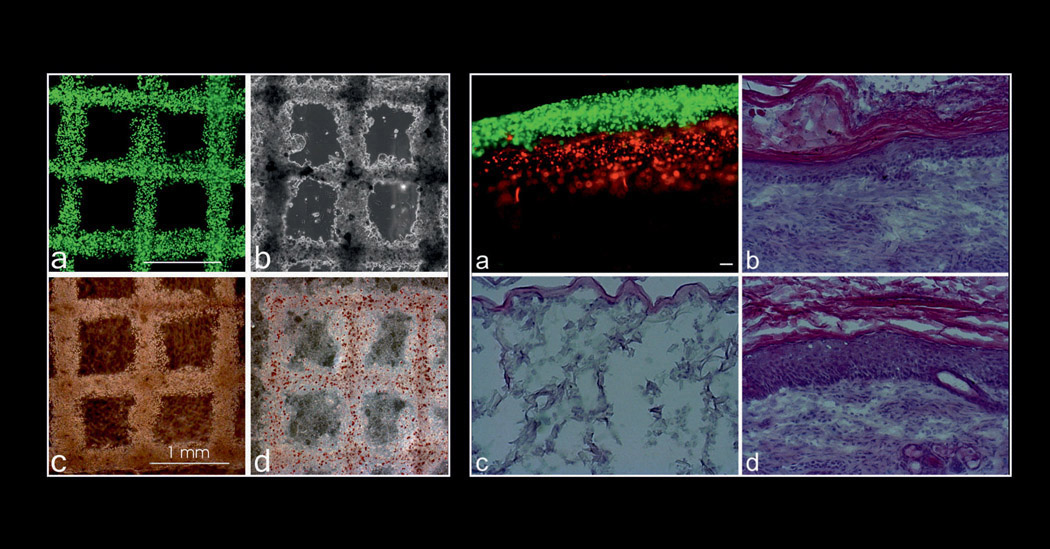 Figure 4. Left: Examples of 3D printed cell structures. Stem cells printed in grid patterns, shown (a) immediately after printing, and later differentiated toward (b) bone, (c) cartilage, and (d) adipose tissue. Right: Histologic sections of skin tissue, consisting of printed fibroblasts and keratinocytes (a) immediately after printing and (b) 10 days after being implanted in mice, as well as (c) implanted collagen-elastin matrix without printed cells, used as a control, and (d) native mouse skin.

Our laser printing techniques are promising for a wide range of applications in nanophotonics and tissue engineering. In our future research we plan to print bacteria and microorganisms.

The authors acknowledge financial support for this work by the REBIRTH Cluster of Excellence (Exc62/1), the project CH 179/20-1, and the Collaborative Research Center/Transregio 123 Planar Optronic Systems of the German Research Foundation (DFG).

Boris Chichkov started his scientific career at the P. N. Lebedev Institute of the Russian Academy of Sciences in Moscow, and later worked in many research centers worldwide. At present, he is professor of physics at Leibniz University Hannover and head of the Nanotechnology Department at the Laser Zentrum.

Urs Zywietz is a scientific worker at the Laser Zentrum in the Nanotechnology Department. His PhD work, in progress, is in the area of nanoparticle generation and characterization.

Lothar Koch leads the biofabrication group in the Nanotechnology Department.