Photonic hypercrystals: the best of both worlds

“East is East, and West is West, and never the twain shall meet." These words by Rudyard Kipling could have been used just as well to describe the primary paradigms for two new optical materials: metamaterials and photonic crystals.

A metamaterial relies on the average response of the individual ‘meta-atoms.’ These building blocks of the new composite are made with dimensions much smaller than the wavelength of light, so, for the light in such a medium—which by its very nature is only sensitive to spatial variations on the scale of its wavelength—the meta-atoms are treated no differently from their ‘true’ counterparts. However, these meta-atoms can be fabricated to have an electromagnetic response not found in actual atomic systems, and therefore the resulting composite may have properties with no analogs in nature. Recently discovered phenomena, such as negative refractive index and cloaking (where light is bent around an object to obscure it from certain wavelengths of electromagnetic radiation), find their origins in this key underlying idea of metamaterials.

A photonic crystal, on the other hand, exploits Bragg scattering of light waves. This leads to the formation of allowed and forbidden bands, just as the periodic arrangement of atoms in a semiconductor results in creation of the conduction and valence bands, separated by a forbidden gap. Photonic crystals enable optical phenomena such as the inhibition of spontaneous emission, omnidirectional reflectivity, and highly efficient waveguiding. However, with constructive and destructive optical interference at the heart of the photonic crystal concept, this physics can only be unlocked when the size of the composite unit cell is comparable to the light wavelength.

The requirements on the unit cell—being much smaller than the wavelength for metamaterials, and on the order of the wavelength for photonic crystals—make the two approaches incompatible within the same environment. The situation is dramatically different, however, in the world of hyperbolic metamaterials, where the opposite signs of the dielectric permittivity components in two orthogonal directions enable hyperbolic dispersion of transverse magnetic-polarized propagating waves, with the wavenumbers unlimited by the frequency. As a result, a periodic variation in the dielectric permittivity—regardless of how small its period—causes Bragg scattering of these high wavenumber modes. This leads to the creation of photonic band gaps, and takes the physical phenomena from the field of photonic crystals to the metamaterial realm.

First and foremost, the surface states formed at the interface of such photonic hypercrystals share the properties of the Tamm states1 in photonic crystals and the surface plasmon polaritons (very short wavelength surface waves) in metals. The contribution of Bragg scattering to the waves' formation means that they show both larger wavenumbers and lower loss than their regular surface-plasmon counterparts. Therefore, they offer a possible solution to the loss/confinement conundrum that has plagued modern plasmonics.2 Hypercrystals can be designed to exhibit a negative refractive index, without the negative magnetic permeability that is usually essential for such materials.3 In this way, it may be possible to use photonic hypercrystals for optical imaging, since a planar slab of such material can function as a Veselago lens.4 Photonic hypercrystals can also support Dirac dispersion cones,5 enabling the study of phenomena normally associated with the highly nontrivial physics of electrons in graphene.6

Hypercrystals can be fabricated using a variety of materials and methods. Figure 1(a) shows four examples of natural hyperbolic materials. Clockwise from the top are: sapphire (hyperbolic in mid-IR); the high-temperature superconductor bismuth strontium calcium copper oxide (BSCCO) (hyperbolic in IR in its normal state); graphite (hyperbolic in IR and UV); and bismuth (hyperbolic in far-IR). Figure 1(c) shows how we achieve a hyperbolic response by stacking thin conducting and insulating layers on top of each other. The inset shows the scanning transmission electron microscopy image of the hyperbolic metamaterial formed by layers of silver and silicon. 7Figure 1(e) shows how we can form a low-loss hyperbolic metamaterial using an array of parallel metallic nanowires in a dielectric matrix. The inset shows the scanning electron microscopy image of the etched side wall of such a metamaterial.8 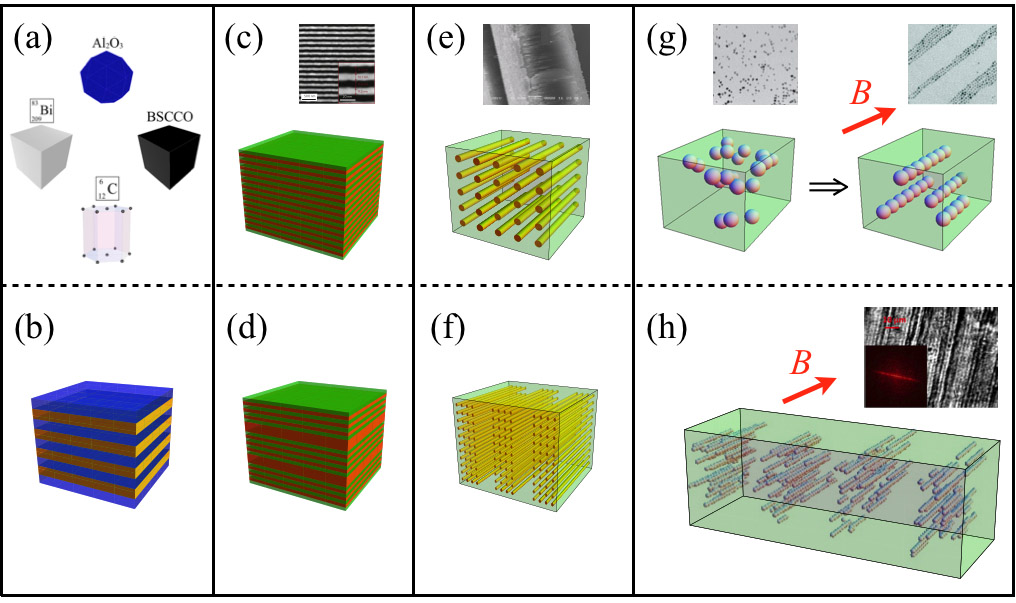 Figure 1(b) and (d) shows a planar design hypercrystal, where the hyperbolic layers are formed by either natural media, such as sapphire or the hexagonal polytype of silicon carbide, or by using existing planar hyperbolic metamaterials. In Figure 1(d), periodic variations in the thickness of the layers of one of the components turn the medium into a hypercrystal. Similarly, a periodic variation in the density of nanowires can transform the hyperbolic nanowire composite into a hypercrystal, as shown in Figure 1(f).

The most interesting realization of an actual hypercrystal comes from the field of material self-assembly.9 When we apply a strong external magnetic field to a metallic ferrofluid (a liquid that contains magnetic nanoparticles), the magnetic nanoparticles in the liquid form nanocolumns aligned parallel to the magnetic field,10 as in Figure 1(g). Furthermore, in a striking example of a nonlinear pattern formation, ferrofluids generally exhibit phase separation into nanoparticle-rich and -poor phases, as in Figure 1(h). As this phase separation occurs on the scale 0.1–1μm, the result is a self-assembled photonic hypercrystal.9

Although in their very infancy, photonic hypercrystals have already shown the potential for practical applications. In one example, a self-assembled hypercrystal successfully served as a sensor for organic components in a liquid solution.9 Our future work will focus on applications of this research, including the fields of radiative heat transfer and control of thermal radiation.

This work was partially supported by the National Science Foundation Center for Photonic and Multiscale Nanomaterials and by the Gordon and Betty Moore Foundation.

Evgenii Narimanov is a professor of electrical and computer engineering. He is a fellow of IEEE and the Optical Society.