Electrospray is the ionization of electrically conductive liquids using high electric fields. Under the influence of a strong enough field (150 million volts per meter, for example), the free surface of the liquid becomes a cone that ejects particles from its tip (see Figure 1).1 The electrospray process generates near-monodisperse particles (those of uniform size) and—depending on the working liquid and the process conditions—these can be droplets, ions, fibers, or a mix.2 However, electrospray emitter throughput is very small (<1μA, <1μN, or <10μl/h, for example), which restricts its application. In fact, the only major role for electrospray so far is as an ion source for mass spectrometry of large biomolecules, for which John Fenn won the Nobel Prize in Chemistry in 2002.3 An attractive approach to greatly increase the throughput of electrospray sources is to operate many emitters in parallel. Several research groups have reported that miniaturized electrospray multiplexed sources, which demonstrate a throughput more than two orders of magnitude larger than for single-emitter sources,4,5 achieve visibly less power consumption per emitter than their macroscaled counterparts (the start-up voltage of an electrospray emitter is proportional to the square root of the tip diameter). 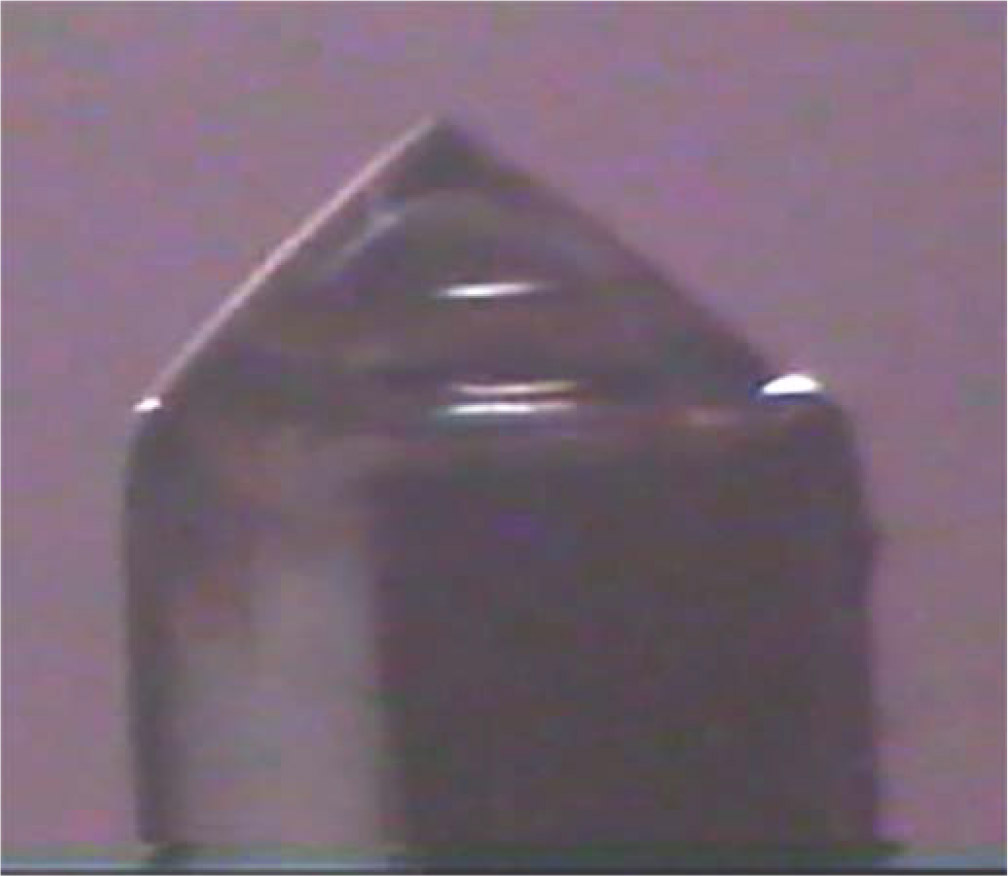 Figure 1. A Taylor cone, formed during ionization, and from which uniform particles are ejected. The outer diameter of the capillary is about 300μm. (Reproduced from http://multiplexed.mit.edu.)

Ion emission using electrospray is possible at a sufficiently low flow rate using ionic liquids.6 These are ionic salts that are liquid at room temperature, and can have high electrical conductivity (>1S/m) and virtually no vapor pressure, which makes them ideal for vacuum applications. Ionic liquids have historically been expensive (∼$1000/cm3), but are now available for tens of dollars. The ionic liquid ion source has applications such as large-area nanomanufacturing (operating many electrospray ion emitters in parallel to deposit or etch material) and efficient nanosatellite propulsion. Ion-based rockets produce thrust at high specific impulse, in other words, they achieve high thrust per unit of mass flow rate. Therefore, the same thrust level is achieved with less mass expenditure compared to other propulsion schemes (chemical rockets, for example). We pioneered the field of microelectromechanical multiplexed ionic liquid ion sources and demonstrated uniform operation of arrays with as many as 1000 emitters in 1cm2,7 and achieved per-emitter currents as high as 1μA with startup voltages of <500V.8 For these devices we developed surface-tension-fed silicon electrospray emitters that use black silicon as wicking media to bring the ionic liquid from the reservoir to the emitter tip, where it is efficiently broken into low-divergence ion beams.

We recently demonstrated high-throughput ionic liquid ion sources with remarkable specifications and performance compared to the state of the art. Specifically, we enabled a per-emitter current of ∼8μA and an array density of 1900 emitters in 1cm2 (10× larger and 4× larger, respectively) for a total 40-fold improvement in throughput compared to the best reported values.9 To achieve this, we developed massive and dense arrays of surface tension-fed electrospray emitters that use carbon nanotube (CNT) forests to regulate and uniformize the emission across the array. Such forests have several advantages as wicking material for surface tension-fed electrospray emitters. They are grown using plasma-enhanced chemical vapor deposition (PECVD) and are highly wetting due to the combination of high surface energy and nanostructured roughness. Furthermore, PECVD CNTs grow conformally, and the porosity of a CNT film—which sets the hydraulic impedance of the film—is highly tunable by changing the growth parameters. In addition, we can grow the forest beyond the maximum height of black silicon to accommodate larger flow rates. Figure 2 shows a schematic of the multiplexed electrospray source, while Figure 3 shows an exploded view with micrographs of the device. By carefully tuning the morphology of the forests, we were able to get as close as possible to the maximum theoretical flow rate per emitter, which is the minimum flow rate that can sustain stable droplet emission: a value given by the physical properties of the liquid. In summary, our electrospray emitters produce the current levels of ionic liquid droplet emitters while still producing only ions. Further details of our work are available elsewhere.9 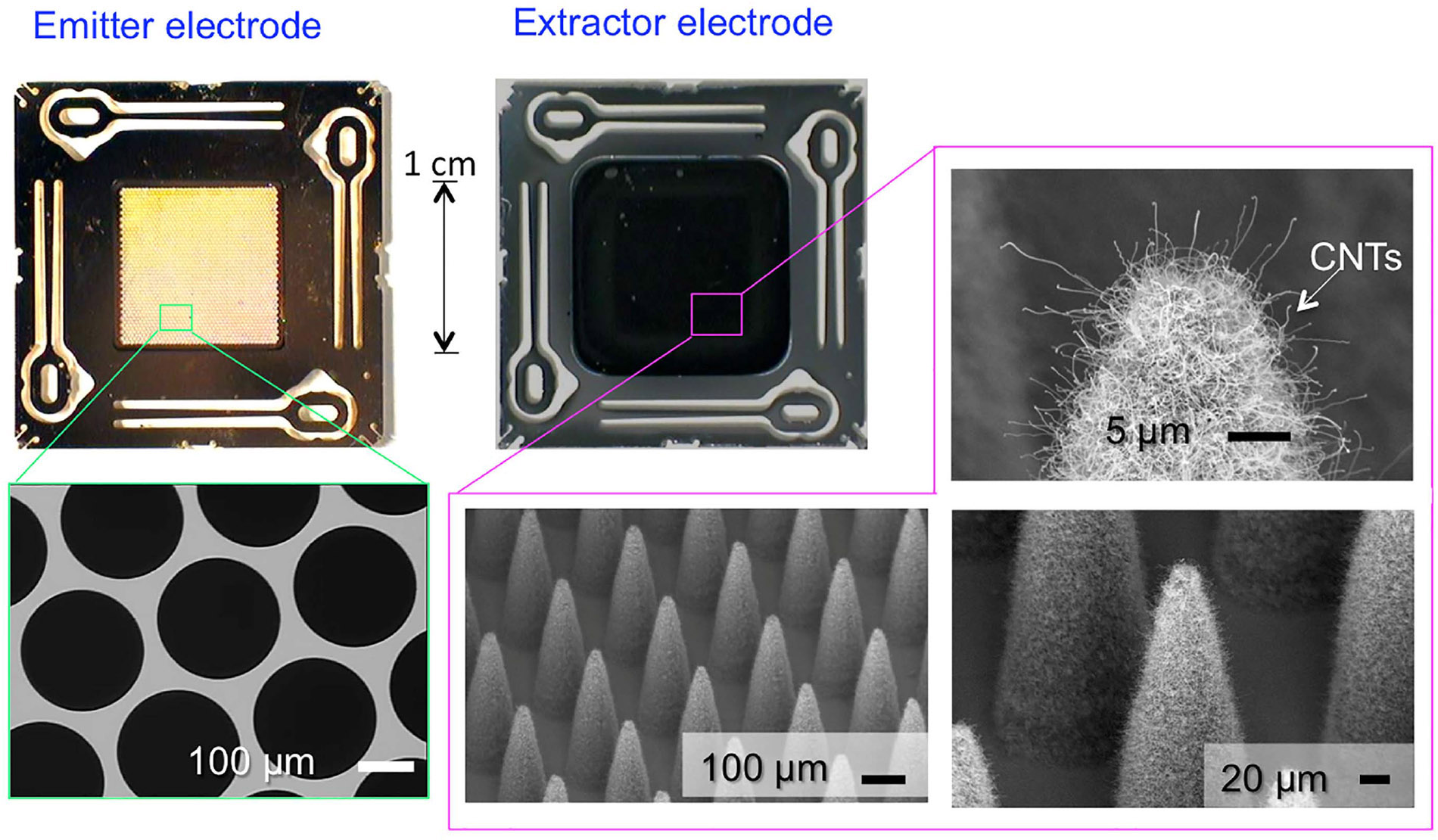 Figure 3. An exploded view of the microelectromechanical system electrospray source based on surface tension-fed electrospray emitters covered by CNT forests.

Using micro- and nanotechnology, we demonstrated a multiplexed electrospray ion source with a hierarchical structure that brings together optimized features with associated characteristic lengths spanning five orders of magnitude. These include mesoscale deflection springs for precision assembly of the emitter, and extractor electrode dies to attain low beam interception, microsharp emitter tips for low-voltage electrospray emission, and a nanostructured conformal CNT forest that acts as a wicking structure to control the flow rate fed to each emitter and enforce array emission uniformity. These devices represent the state of the art in electrospray ionic liquid ion sources in terms of lowest start-up voltage, highest per-emitter current, largest array size, and densest emitter arrays. The work will find applications in large-area nanomanufacturing and mass efficient nanosatellite propulsion.

We identify several future developments for our multiplexed electrospray chip technology. First, we plan to develop electrode stacks for individual activation of emitters or emitter clusters and for collimation or focusing of the ion beams. This will enable use of the chip as a ‘dot-matrix’ printhead in nanofabrication applications. In addition, we plan to develop a liquid feed system that allows continuous supply of liquid to the chip. For this, we would use individually controllable emitters or emitter clusters, and individual liquid feeds could assist nanomanufacture with different materials without having to change the liquid or hardware. Moreover, we plan to investigate other kinds of wicking structures and emitter geometries to implement multiplexed electrospray sources that produce nanofibers or droplets, to increase the range of devices that can be made with the chip technology. Examples include high-throughput nanofiber generators and nanothick coating systems for low-cost printing of nanodevices or systems.