A green astro-comb to search for Earth-like exoplanets

A new specialized laser has been deployed and tested as a wavelength calibrator for the Telescopio Nazionale Galileo in the Canary Islands.
29 January 2015
Chih-Hao Li

One of the first steps in the search for alien life is the identification of Earth-like planets—or ‘exo-Earths’—orbiting Sun-like stars. Most Earth-sized rocky exoplanets that have so far been discovered, however, are located much closer to their host star than the theoretical habitable zone (the circumferential region around a star in which planetary surface conditions are suitable for the existence of water in the liquid state), due to the technical limitations of the observations. To identify exo-Earths unambiguously, it is essential to measure both the size and mass of the candidate exoplanet. This allows the bulk density—used to distinguish rocky planets and gas giants—to be calculated.

The size of an exoplanet can be estimated via the transit method, i.e., from the periodic blocking of light from the host star by the planet. In addition, the precision radial velocity method can be used to measure the mass of exoplanets. With this method, the exoplanet mass is calculated from the periodic reflex motions of the host stars, caused by the gravitational pull of the exoplanets (see Figure 1). The extremely subtle wobbles in stellar motion induce tiny periodic Doppler-frequency shifts to the stellar spectra, which contain several spectral lines that provide characteristic information about the star's atmosphere. Stellar radial velocity (RV) observations, with precision of less than 10cm/s, are required to detect exo-Earths. Such precision must also be stable for several years so that the potential exo-Earths can complete at least three orbits. Classical RV precision, however, is limited by traditional wavelength calibrators (e.g., thorium-argon lamps and molecular iodine cells), which means this method can only be used to detect short-period, massive exoplanets that induce RV wobbles of more than 50cm/s on their host stars.1 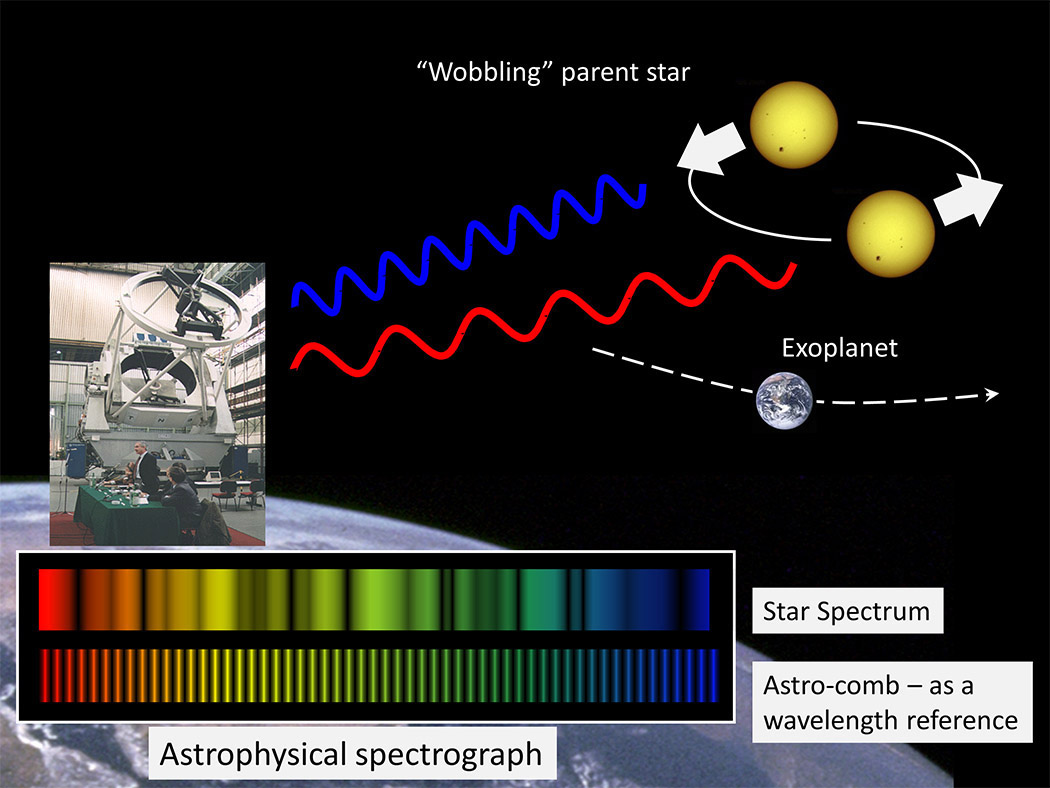 Figure 1. Illustration of the precision radial velocity method for exoplanet searches. The presence of an exoplanet can be inferred from the periodic Doppler shifts of the stellar spectrum as the star's motion wobbles due to the gravitational pull of the unseen exoplanets.

Previous work by our team and others2–5 indicates that an increase in RV precision and long-term stability, by an order of magnitude, can be achieved via improved spectrograph calibration with the use of a so-called astro-comb. This device is a laser calibrator that produces ultrastable, regularly spaced spectral markers, as well as feature densities that are well-matched to the resolution of the astrophysical spectrographs. We are now using this technology to improve on past technical limits and to detect larger numbers of exo-Earths in the habitable zones of stars.

In January 2013, following three years of development and testing at the Harvard-Smithsonian Center for Astrophysics, we deployed a ‘green astro-comb’ as a wavelength calibrator for the High Accuracy Radial velocity Planet Searcher for the Northern hemisphere (HARPS-N) spectrograph at the Telescopio Nazionale Galileo (TNG) in the Canary Islands.6 The spectrum from our green astro-comb is composed of more than 8000 ultrastable narrow lines, with equal 16GHz spacing (optimized for the calibration of HARPS-N) in the 500–620nm band (the most useful band for RV measurements of solar-type stars).7, 8 We have also referenced the green astro-comb to the Global Positioning System. The frequency of each spectral line is therefore accurate to less than 10cm/s, which is sufficient for the detection of exo-Earths.

Our green astro-comb involves two main technological developments, i.e., generation of comb lines in the green spectral range and large comb-line spacing. We have created our own comb laser that can directly output spectral lines in the green wavelength range because none was previously available. We achieved this comb laser by coupling the near-IR comb light from a titanium-sapphire laser into a custom tapered photonic crystal fiber (PCF). This fiber is optimized to produce broad green spectra, with uniform intensity and high conversion efficiency (about 5%), via a nonlinear process known as fiber-optic Cherenkov radiation.9

The line spacing of comb lasers, however, is limited to less than 1GHz, which is an order of magnitude less than can be resolved by an astrophysical spectrograph. We therefore converted the 1GHz green comb to a 16GHz green astro-comb by mode filtering the 1GHz green comb lines (which are generated by PCF) with two Fabry-Perot cavities (FPCs) in series. We tuned the mode spacing of the FPCs so that they pass every 16th comb line and suppress the intermediate 15 lines to a level that is negligible in the spectrograph calibration. We have characterized our green astro-comb spectrum using a Fourier transform spectrometer10 in the laboratory. As such, we ensured its accuracy and long-term stability before we delivered the device to the TNG and its use as a wavelength calibrator for HARPS-N.

HARPS-N is a fiber-fed spectrograph with two input fibers.11 One of the fibers is typically used for an astronomical object, and the other is for a wavelength calibrator (see Figure 2). This configuration is essential for the correction of the HARPS-N spectral drifts. To demonstrate the calibration precision of our green astro-comb, we illuminated both input fibers with astro-comb light. Our results confirmed that the calibrations of both fibers are consistent within 6cm/s, per exposure.12, 13 We have also recently started to study planet-induced RV signals that are embedded in the spectrum from our Sun. With these measurements we can test the sensitivity of our green astro-comb calibration on HARPS-N. In particular, we are attempting to ‘rediscover’ Venus, and to determine its mass (0.82 times the mass of Earth) and orbital radius (0.73 times the Earth–Sun distance), both of which are comparable to those of exo-Earths. We hope that this exercise will provide further evidence that our new technique is applicable to the detection of exo-Earths orbiting distant stars. 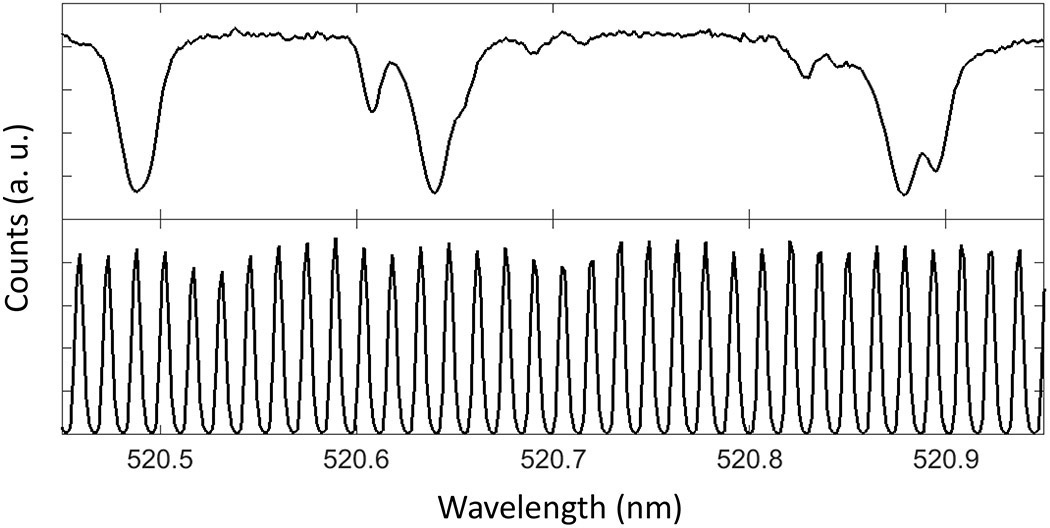 We have successfully built a green astro-comb with unprecedented levels of precision and stability, which are suitable for the search for exo-Earths. Our device serves as a wavelength calibrator for the HARPS-N spectrograph on the TNG in the Canary Islands. We are now planning to perform precise RV observations of selected candidate stars, with which we hope to make discoveries of long-period Earth-like exoplanets.

Chih-Hao Li is a staff scientist whose recent work has been focused on the development of a new laser system (‘astro-comb’) for exoplanet searches.