A method that uses lasers to position bacteria with single-cell precision shows that even small groups of a few microbes can increase their own growth rate and impair the development of other infecting species.
30 December 2014
Vernita D. Gordon and Chris Rodesney

Biofilms are sessile communities of interacting unicellular organisms that adhere to a surface and to each other. Traditionally, microbiology has focused on well-mixed fluid cultures of suspended free-swimming cells, but in most natural settings bacteria are generally found in a biofilm. These form on almost any surface, causing biofouling and biocorrosion in industry, and infecting devices and patient tissues in medicine. Being in a biofilm increases the bacterial constituents' resistance to clearance and therefore the harm they do to the host. Understanding which properties of biofilms facilitate the worst clinical outcomes would identify targets for diagnostics and treatment.

It is widely thought that a biofilm's spatial structure plays a key role in its persistence, controlling the transport of nutrients, oxygen, and other chemicals. Furthermore, its structure defines zones of intercellular interactions, which result in altered metabolism and signaling profiles that can increase resistance to antibiotics and the production of host-damaging virulence factors. However, the specifics of how spatial structure affects the course of biofilm infections are largely unknown because there are too few tools to produce biofilms with well-defined, user-tunable spatial structure. Recently developed approaches1 have structured biofilms on millimeter lengthscales—much larger than single bacteria or typical biofilm infections—or they modify the surface and thereby alter the natural course of biofilm development.

We have devised a way to structure these bacterial systems with single-cell resolution while leaving unchanged the bacteria's surface adhesion and motility.2 To do this, we use a laser trap to place bacteria on a surface, one at a time, thereby building up arbitrary, user-defined, and reproducible configurations (see Figure 1). A laser trap uses light focused through a high-magnification microscope objective to hold micron-sized objects with an index of refraction higher than that of the surrounding medium.3When light transmits through a boundary between materials with different refractive indices, electromagnetic boundary conditions require that light not at normal incidence must alter direction, which changes the light's momentum. Conservation of momentum requires that an equal and opposite change in momentum is imparted to the object in the trap, so that it is held near the focus of the laser beam.

Bacteria are typically ∼1μm in size and have an index of refraction higher than aqueous culture media, making them highly suitable for laser trapping. However, interaction of intense laser radiation with molecular oxygen can create excited, highly reactive states that damage and kill bacterial cells.4 We overcome this problem using an IR laser,5 minimizing the oxygen present in the growth medium, and limiting the laser power and the time in the trap. The microscope stage (the platform on which we perform the trapping) is enclosed in a light-tight, temperature- and humidity-controlled environment (see Figure 2), which enables the growth of biofilms under physiological conditions.

Figure 2. The trapping microscope's stage area is surrounded by an incubator enclosure. (A) Frontal view of the microscope with the enclosure closed. (B) There are two doors on the front of the enclosure that can be opened to allow access to the stage area. We use green monochromatic illuminating light (as shown) for optimal spatial resolution. (C) To access the objective turret and under-stage area, there are removable sections on the bottom of the microscope on both sides of the stage. Shown is the section on the laser side. The laser enters the microscope enclosure through a small hole and can be directed upward to the sample using a dichroic mirror controlled by a slider. (Photo B reprinted with permission from Qiuxian Cai.)

We considered Pseudomonas aeruginosa, an opportunistic human pathogen that forms biofilms in chronic wounds and in the lungs of cystic fibrosis patients. We found that small clusters of Pseudomonas (fewer than 10 cells in size) grown in a medium containing bovine albumin (a carbon source that must be broken down by extracellular proteases6, 7) develop about 15% faster than do their isolated clonal siblings in the same medium, as shown in Figure 3(A). 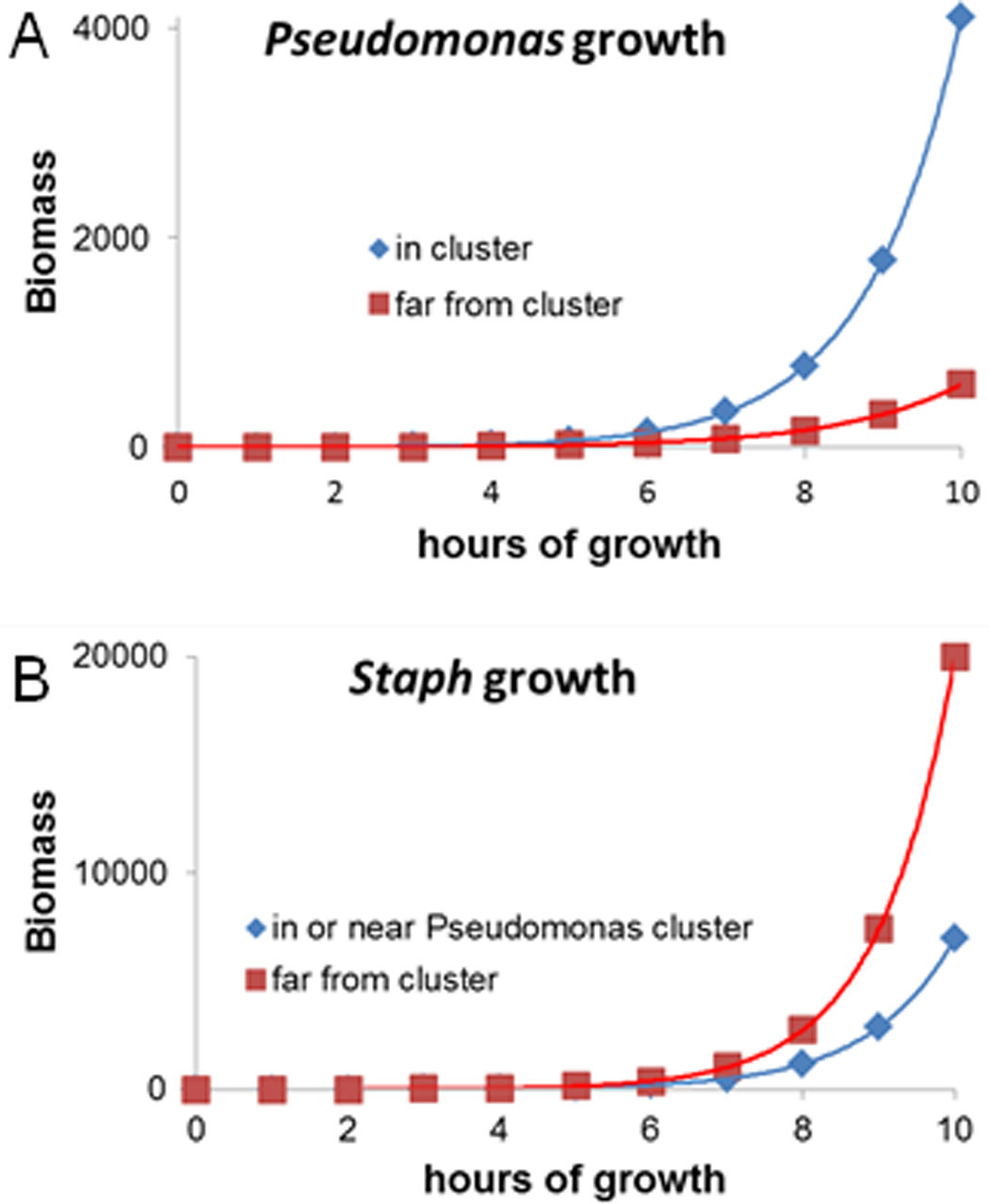 Staphylococcus aureus frequently appears as a co-pathogen with Pseudomonas, and interspecies antagonism between the two can increase the virulence of Pseudomonas infections.8 However, Pseudomonas and Staph biofilms are often small and not in direct contact, even when in the same infection.9 Thus, it is necessary to understand the conditions required for activation of Pseudomonas-Staph antagonism to identify scenarios in which co-infection results in damaging outcomes. We have taken the first step toward this by showing that small clusters of ∼10 initial Pseudomonas cells reduce the growth of Staph by ∼10%, as shown in Figure 3(B).

In summary, to understand how the spatial arrangements of microbes affect the course of chronic biofilm infections, we need ways to control the structure of these films on a single-cell level. Our work shows we can do this for two disease-causing organisms, P. aeruginosa and S. aureus.2We developed our method on P. aeruginosa and it is directly transferrable to S. aureus. Therefore, we think it likely that we have found the experimental principles that enable laser trapping to build structured biofilms of a wide range of organisms.

Laser trapping is not a common tool in microbiology departments. However, the devices we use here are widespread and can often be found in physics, chemistry, or engineering labs. The other equipment used for our procedure is inexpensive and standard. Thus, the method we have developed should be a widely usable tool for microbiological and physical collaborators at many types of institutions. In future, we aim to use our approach to investigate what conditions are necessary for S. aureus to activate virulence in P. aeruginosa, in terms of spatial density and distribution of both species, and the transport conditions in the environment.

We thank Marvin Whiteley (University of Texas at Austin) and Steve Diggle (University of Nottingham) for their gifts of bacterial strains and many helpful discussions. This work was supported by startup funds to author VDG from the University of Texas at Austin and by a grant from the Human Frontiers Science Project (HFSP-RGY0081/2012). VDG thanks the Cystic Fibrosis Foundation for the postdoctoral fellowship she held in 2008–2010 (CFF-GORDON08F0), which allowed her to develop much of this technique.

Vernita Gordon is an assistant professor of physics and a member of the Center for Nonlinear Dynamics and the Institute for Cellular and Molecular Biology. She likes finding new ways to use physics to understand and possibly remediate disease-causing biological systems.

Chris Rodesney is a PhD candidate and earned his BS in physics from Georgia Institute of Technology in 2012. In addition to experimental biophysics, he also enjoys sharing his research and general physics with broader audiences outside of science.