Thin-film III-V semiconductor solar cells have a number of advantages compared with other types of solar cells. For example, tuning the bandgap of III-V compound materials to match the solar spectrum gives the resulting solar cells unsurpassed conversion efficiencies. The virtues of these devices notwithstanding, the semiconductor substrate used in fabricating them is expensive, which adds to their cost. A method known as epitaxial lift-off (ELO) enables substrate reuse, which enhances affordability.1 However, the technique relies on hydrofluoric acid (HF) solution, a popular chemical etchant, and long-term exposure to the etchant increases the surface roughness of either the epilayer (i.e., the thin film containing the device) or the substrate. This roughness in turn hinders both substrate reuse and the performance of the solar cells. To solve this problem, various chemical fluids have been proposed to clean the substrate and modify the surface structure.2 But chemical cleaning is difficult to control because it is isotropic (that is, it etches at the same rate in every direction).

A gallium arsenide (GaAs) solar cell on a (100) GaAs substrate consists of a 0.2μm-thick GaAs buffer layer, a 0.2μm-thick indium gallium phosphide (InGaP) etching stop layer, a 3μm-thick GaAs buffer layer, a 20nm-thick aluminum arsenide (AlAs) sacrificial layer, and a 2.6μm-thick GaAs device epilayer. For ELO to be practical, etching time needs to be fast. However, arsine (AsH3) bubbles formed during the ELO process are known to obstruct the etching slits and prevent the AlAs sacrificial layer from reacting with the HF solution. Previous research3 established that oxygen is required for chemical etching of AlAs in HF solution. Blocking of the etching slits by the AsH3 bubbles reduces oxygen and causes it to disappear, which most likely explains the failure of the epilayer and substrate to separate. Removing the bubbles should result in faster separation, thereby preserving the qualities of both the GaAs epilayer and the reused substrate following chemical etching.

Here we describe work in which the epilayer structure of a GaAs solar cell was quickly separated from the GaAs substrate by ELO in HF solution mixed with hydrophilic additives, and then transferred to a copper substrate.4 With incorporation of the hydrophilic additives—acetone (ACE), isopropanol (IPA), and methanol (MA)—the lateral etching rate on the AlAs sacrificial layer was much higher than that using pure HF solution. We attribute this improvement to the decrease in surface tension of these solution mixtures and the contact angle between etching-induced bubbles and substrate, which results in efficient venting of bubbles.

During ELO, the bubbles generated by HF:ACE were slightly larger than those made using HF:IPA and HF:MA due to the relatively large surface tension and contact angle of HF:ACE. By the same token, with HF:ACE the solid products formed on the surface of the GaAs buffer and device layers showed the lowest thickness, leading to the highest lateral etching rate of the AlAs layer (14.3μm/min). Compared with device performance following conventional ELO using pure HF solution, the mixed solutions enhanced cell efficiency. Efficiency was also further improved through the decrease in removal time of the GaAs substrate as a result of less etching-induced damage to the GaAs epilayer. 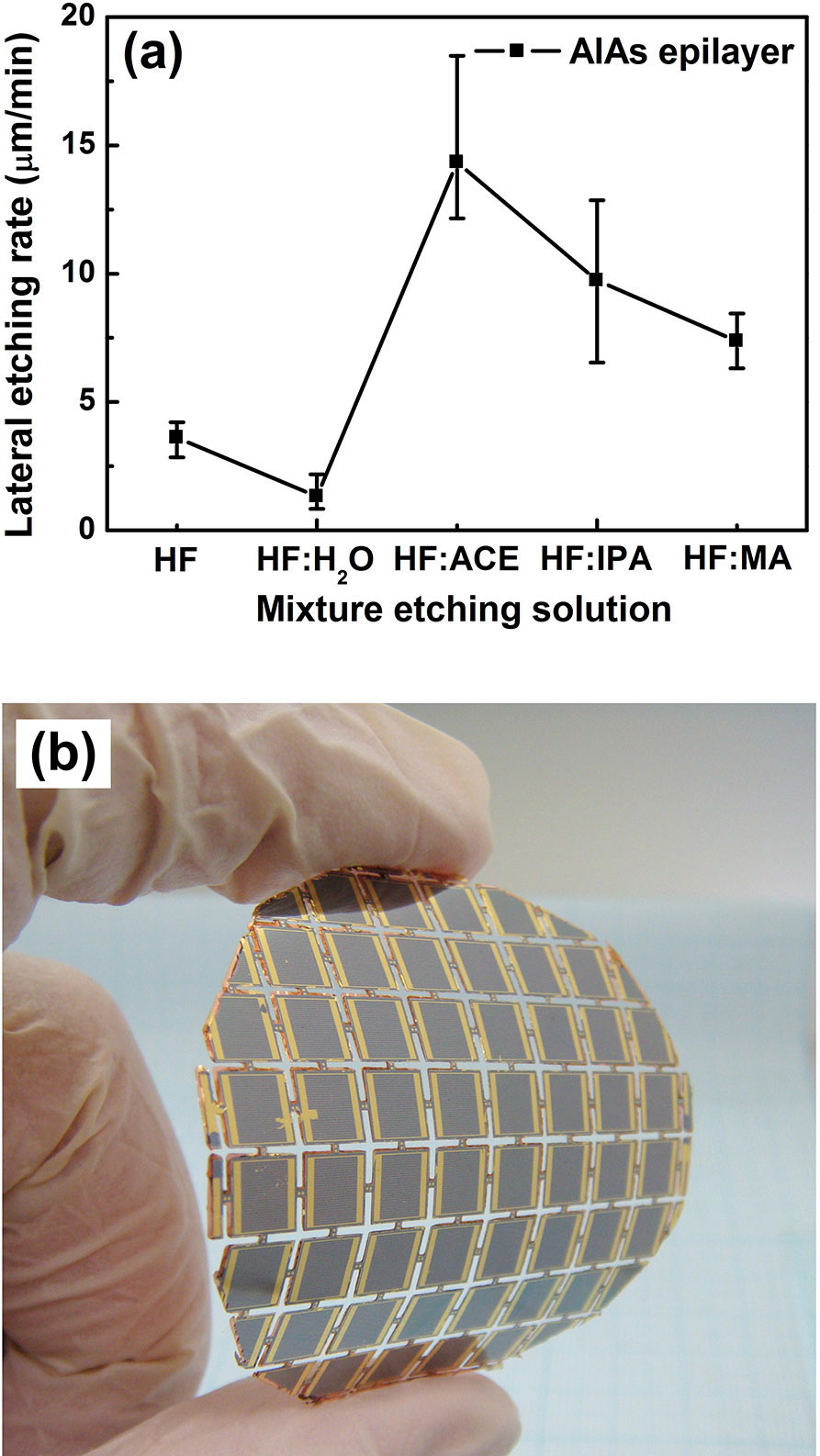 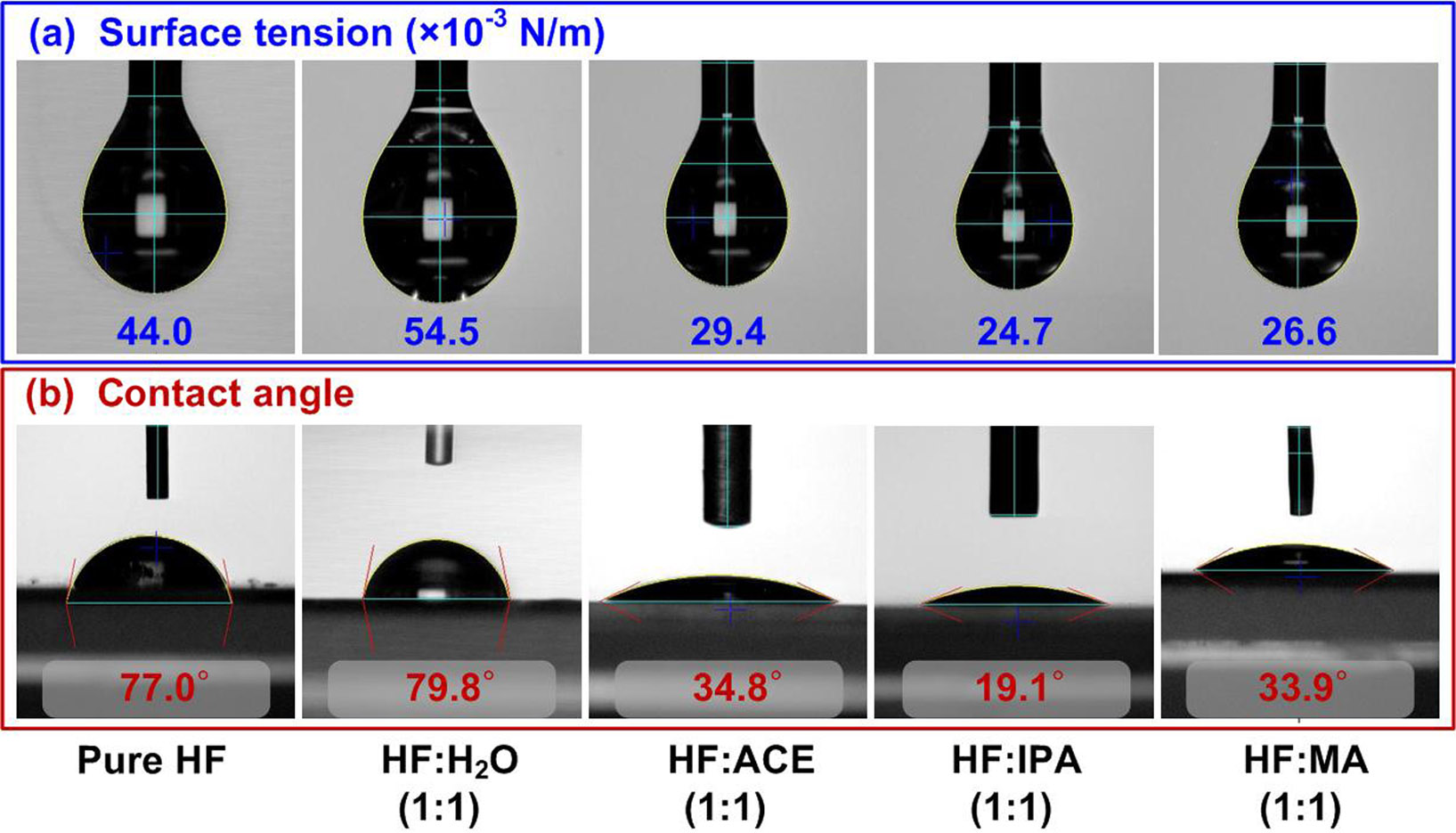 Figure 2. (a) Surface tension and (b) contact angle measurements of HF solutions carried out on the GaAs (gallium arsenide) substrate.

In summary, we have presented a promising method for reducing the size and adhesion area of etching-induced bubbles generated during ELO. Optimal cell performance can be obtained by decreasing the removal time of the GaAs substrate through the addition of hydrophilic substances to the HF solution (particularly ACE). Our findings show that the technique we have developed offers great potential for substrate reuse and cost-effective fabrication of solar cells. As a next step, we plan to focus on a number of issues related to thin-film III-V solar cells, such as the surface character of the reusable substrate and the possibility of stacking the devices.

Ray-Hua Horng is dean of the Institute of Innovation and Industry School and distinguished professor of the Graduate Institute of Precision Engineering at National Chung Hsing University.