Photoelectrochemical (PEC) water splitting, in which molecular hydrogen and oxygen are directly dissociated from water molecules using semiconductor electrodes, dates back to 1972.1 Certain factors have, however, delayed developments in this field over the last few decades. Limitations include the expense of the required materials, electrode instability against photocorrosion, and poor solar-to-hydrogen (STH) generation efficiencies.2 Recent advances in the field of nanotechnology may enable these bottlenecks to be overcome. PEC water-splitting research currently targets low-cost and Earth-abundant elements that show promising STH conversion efficiencies. The semiconductor materials used usually include inexpensive metal oxides, metal sulfides, and metal carbides. A state-of-the-art device based on tungsten-doped bismuth vanadate photoanodes3 has enabled an STH conversion efficiency of ∼5%. The highest efficiency to date (14%) was achieved using a titanium dioxide-coated indium phosphide photocathode.4 These recent studies show the potential for commercial PEC water-splitting devices.

Surface roughness plays a vital role in improving the collection of photogenerated carriers at the semiconductor-electrolyte interface (see Figure 1).5 The water oxidation reaction at a semiconductor electrode is much more efficient if a rough surface is used instead of a smooth one. This is due to its higher surface area, which leads to more photocatalytic sites and thus to higher activity. Structures such as nanorods, nanotubes, nanoplates, and porous films can be used to introduce surface roughness in electrodes. 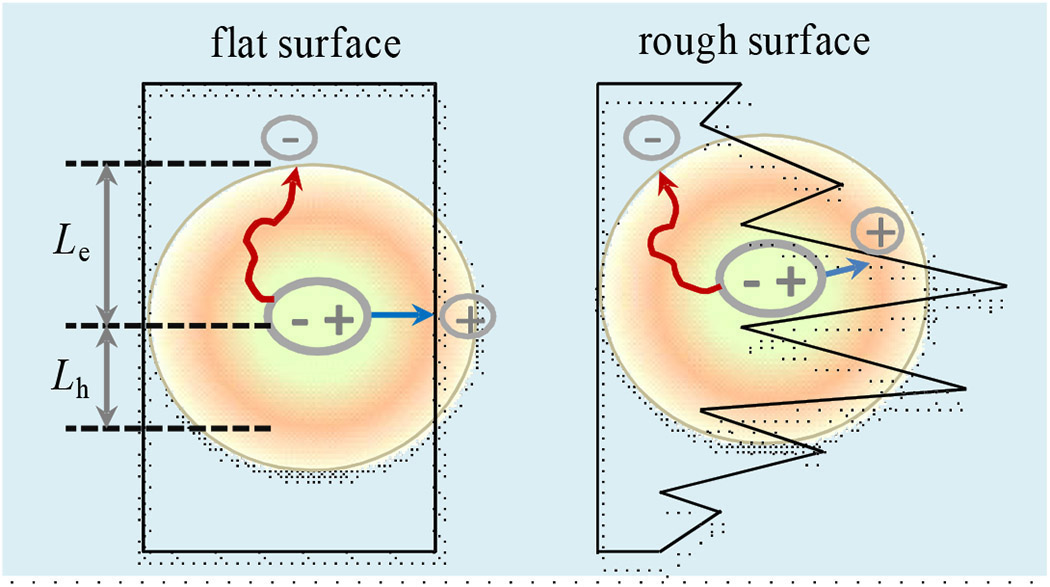 Figure 1. Minority diffusion lengths for the electron (Le, –) and hole (Lh, +) on flat and rough electrode surfaces. On the textured electrode, the distance between the surface and the location at which holes (+) are generated can be shorter in comparison with the flat semiconductor substrate.

We have developed a novel approach for the preparation of nanostructured porous tungsten trioxide (WO3) thin films.6 These textured films—see Figure 2—are composed of small individual nanoparticles and show high surface area and porosity. The films exhibit catalytic activity upon illumination with UV/visible light, making them promising candidates for PEC water splitting. 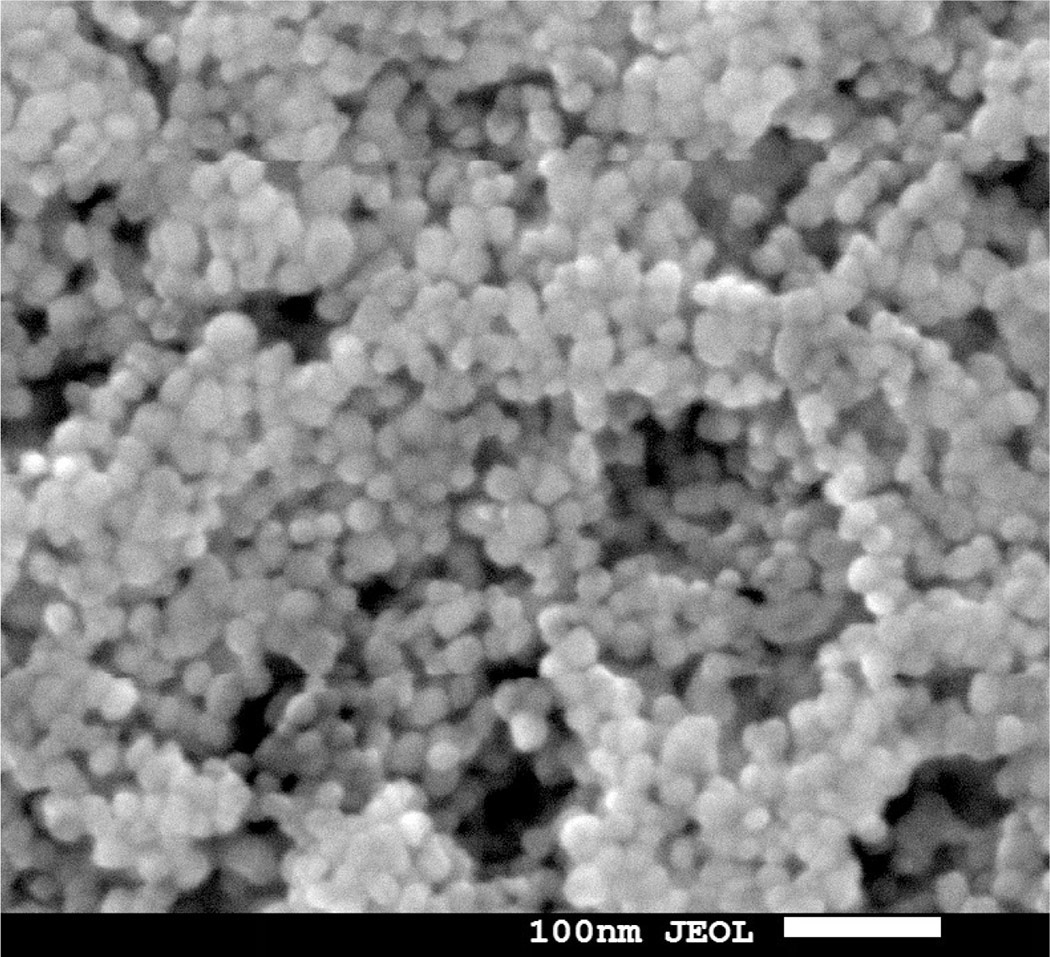 Our fabrication procedure involves spin-coating metallic tungsten nanoparticles (NPs) onto a fluorine-doped tin oxide substrate. The obtained tungsten films are subsequently calcinated at ∼500°C to produce nanostructured WO3 films. We prepared the synthesized tungsten NP suspension by dispersing them in different volumes of chloroform. This method enables the precise tuning of WO3 film thickness by adjusting initial parameters (i.e., tungsten nanoparticle concentration in the stock solution and spin-coating speed). For example, to produce a 200nm-thick tungsten film, we dissolved 0.32g tungsten NPs in 2ml of chloroform and spin-coated at 1000rpm for 20s.

Calculations have shown that the use of WO3 can lead to an ∼6% STH conversion efficiency due to its narrow band-gap value: see Figure 3(a). The advantage of using WO3 arises from its intrinsic carrier transport properties, including its moderate hole diffusion length (the average distance a carrier can move from the point of generation until it recombines, Lh) of ∼150nm. Recombination of electrons and holes suppresses the water-splitting reaction, thereby reducing the STH conversion efficiency. The longer Lh in WO3 leads to a lower electron-hole recombination rate, thereby resulting in enhanced efficiency. 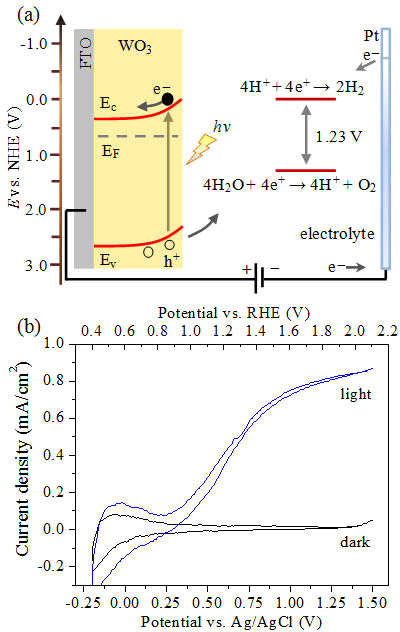 Figure 3. (a) Scheme showing the energy diagram of the WO3photoelectrochemical cell under applied bias. The device employs a fluorine-doped tin oxide (FTO) substrate, a WO3film as carrier transport layer, and a platinum (Pt) wire as cathode. The space between the film and the Pt contains water with a dissolved electrolyte. The photoexcited electrons in the WO3film move from the valance (EV) to the conduction band (EC) and later are collected at the Pt wire. (b) Current-voltage plot showing the behavior of the WO3electrode in dark and under illumination. The increase in photocurrent is due to the water-splitting reaction. NHE: Normal hydrogen electrode. RHE: Reversible hydrogen electrode. Ag/AgCl: Silver/silver chloride.

In addition to providing a short diffusion path for the photogenerated carriers, textured structures exhibit a high surface area. This enables the acceleration of chemical reactions and enhances light absorption. Using nanostructured WO3 films under 1 sun illumination, we achieved ∼1mA/cm2 at 1.9V vs. reversible hydrogen electrode: see Figure 3(b). The photocurrent density that we obtained is four times lower than the best-performing WO3 thin films reported by other groups.7 Moreover, this methodology is simple, scalable, and offers numerous opportunities to increase the photogenerated current density. This approach could also be extended to include the preparation of other metal oxides such as iron oxide, cobalt oxide (Co3O4), and molybdenum trioxide for use in PECs. In addition, the spin-coating method could be used to create heterostructure films (e.g., WO3/ferric oxide, WO3/Co3O4).

In summary, we have developed a technique for the fabrication of nanostructured porous films that could increase the efficiency of metal-oxide-based PEC cells. In future work, we will focus on coating other semiconductor metal oxide films (e.g., ferric oxide and bismuth vanadate) on top of the WO3 layer to enhance sunlight-harvesting efficiencies. The final challenge will be to connect a photovoltaic cell to these films, which will provide the energy required to drive the water-splitting reaction.

This work was financially supported by the European Commission under a Seventh Framework Programme Marie Curie grant (HETMAT, project 322114).

Saim Emin is currently an assistant professor and Marie Curie fellow at the University of Nova Gorica, Slovenia. He received his PhD degree in 2010 from Saitama University, Japan, and worked as a postdoctoral researcher at the National Institute for Materials Science in Japan from 2010 to 2011.

Matjaz Valant is head of the Materials Research Laboratory and a full professor of materials science at the University of Nova Gorica, Slovenia. He is a visiting academic at Imperial College London, and his research focuses on electronic and environmental materials.