Photoconductivity is a well-known phenomenon in electronics: shining light on a semiconductor like silicon increases its conductivity. The increase occurs because absorbed photons liberate electrons in the valence band from their bonds with atoms, enabling the electrons (charge carriers) to travel freely in the conduction band. This general principle guides the design and optimization of a wide variety of modern electronic devices, including solar cells, photodiodes, and digital cameras. We have investigated the influence of ultrashort light pulses on the conductive behavior of atomically thin layered materials. In the course of our research, we discovered the opposite behavior—significant photoreduction of conductivity—in a single atomic layer of molybdenum disulfide (MoS2),1 a promising semiconductor for novel applications in ultrathin flexible electronics and optoelectronics. We found that the conductivity of single-layer MoS2 decreases by about 70% when the semiconductor is excited by strong laser pulses.

To explore this phenomenon of reduced conductivity, we applied time-domain terahertz (THz) spectroscopy to large-area monolayer MoS2 samples grown by chemical vapor deposition.2 The conductivity of the samples was obtained by measuring the transmission of the THz pulse. In contrast with conventional transport measurements, in which electrodes may cause extrinsic effects on samples, this THz approach avoids any electrical contacts and thus helps reveal the intrinsic conductive properties of a material. The technique also reveals the temporal dynamics of the photoexcited charge carriers in a pump-probe experiment.

We first measured the waveform of the THz electric field E(t) transmitted through the MoS2 sample in equilibrium conditions: see Figure 1(a). Afterward, we excited the sample with optical laser pulses, as shown in the inset of Figure 1(c). These pulses were expected to generate a large population of carriers and enhance the conductivity of MoS2. Surprisingly, Figure 1(a) shows that the pump-induced change of the THz field ΔE indicates a transient increase of transmission in our sample. Figure 1(b) shows that the extracted change of complex sheet conductivity Δσ(ω, τ) of the monolayer MoS2 exhibits negative values for both the real and imaginary parts. The observed negative photoconductivity is a robust and substantial effect. Figure 1(c) shows that it persists for all pump-probe delay times. It also persists throughout the range of incident pump fluences (F=0.4–170 μJ/cm2) and temperatures (T=4–350K) in our experiment. At high fluences, the THz response becomes saturated and the conductivity of monolayer MoS2 is reduced to only ∼30% of its equilibrium value.

Figure 1. Observation of negative photoconductivity in single-layer molybdenum disulfide (MoS2) caused by formation of trions under optical excitation. (a) Change of THz transmission after femtosecond laser excitation. The y-axis is in arbitrary units (a.u.). Blue and red lines denote, respectively, the equilibrium transmitted THz field E(t) and the pump-induced waveform ΔE(t, τ) at a pump-probe delay of τ=3ps. The incident pump fluence is 50μJ/cm2and the pump photon energy is 3.1eV. (b) Extracted pump-induced change of complex sheet conductivity Δσ(ω, τ) from measurements in (a). Conductivity is plotted in units of the conductance quantum G0=2e 2/h. (c) Temporal evolution of the ratio between the maximum values of waveforms ΔE(t, τ) and E(t). Measurements were carried out at the same incident pump fluence (65μJ/cm2) but different pump photon energy (0.77–2.11eV) at temperature T=50K. Inset shows a schematic of our experiment. (d) Long-component signal as a function of photon energy, with the same left y-axis as (c). The absorption spectrum (dashed curve) is measured on a representative monolayer MoS2flake. The major (long) component is quenched as the photon energy falls below 1.9eV, which corresponds to the resonance of the A exciton and trion from the absorption spectrum of monolayer MoS2. All measurements were made at low temperatures of T∼50K. Im: Imaginary. Re: Real.

We account for this reduction of conductivity by considering the strong Coulomb interaction in MoS2, which is substantially enhanced by the reduced dimensionality and weakened dielectric screening of the charge carriers as the MoS2 crystal becomes atomically thin. In particular, the excitons in monolayer MoS2 have a binding energy of a few hundred meV. They are charge neutral and do not interact with THz radiation. When excess doped electrons are available, the excitons capture free electrons to form three-body bound states known as negative trions with two electrons and one hole. These trions possess large dissociation energies (20–50meV) and are stable even at room temperature.3 After pulsed excitation, the generated electron-hole pairs form negative trions with the excess free charge carriers. The trions behave as free charged particles with increased effective mass, resulting in lower carrier mobility and hence lower conductivity. In other words, instead of increasing the free-carrier concentration, photoexcitation adds mass to the original free charge carriers and dulls their response to the electric field (see Figure 2). Therefore, the observed ∼70% reduction of conductivity arises from a threefold increase of carrier effective mass. 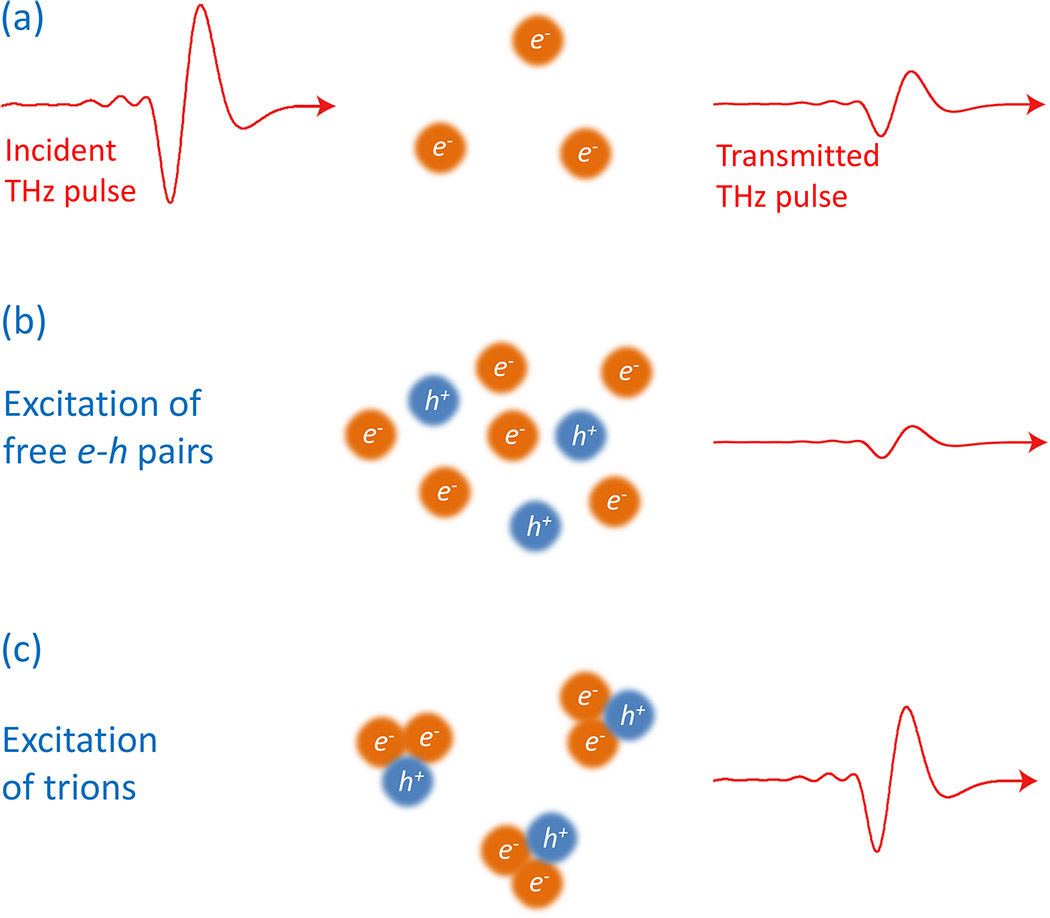 Figure 2. Effect of trion formation on the electrical conductivity of single-layer MoS2under photoexcitation, measured by the absorption of terahertz (THz) radiation pulses. (a) Absorption of THz pulse by doping-induced free charge carriers (e-). (b) Increased THz absorption by excitation of free electron-hole (e--h+) pairs. (c) Reduced THz absorption by formation of trions, bound states of two e-and one h+ that are analogous to negatively charged hydrogen ions. Instead of increasing the population of free charge carriers, as happens in conventional semiconductors, optical excitation converts the electron gas in MoS2to a trion gas with the same charge density, but much heavier mass. As a result, the conductivity of the material substantially diminishes.

To verify the trion behavior, we conducted the THz experiment with a tunable source of pump photon energy that ranged from 0.77 to 2.11eV: see Figure 1(c) and 1(d). We observed that the overall THz dynamical response is suppressed sharply and the major (long) component is quenched as the photon energy falls below 1.9eV. Figure 1(d) shows that this critical energy value matches the resonance of the A exciton and trion from the absorption spectrum of monolayer MoS2. Near the excitonic resonance, we expect only excitons and trions to be produced, with minimum free-carrier generation and carrier heating. Because neutral excitons do not interact with the THz radiation, the strong signal of negative photoconductivity must arise from the charged trions.

Our findings imply that charge transport in monolayer MoS2 can be conducted by trions, which respond to the electric field as free charged particles. An applied electric field can control the motion of trions and the associated photoluminescence, spin index, and valley index. This unique feature holds promise for developing novel devices that transmit information through trions with controlled spin and valley indices, known as spintronics and valleytronics. Such development would require extension of our work to realize trion transport in an electrical device.

Chun Hung Lui received his PhD in physics at Columbia University in 2011. He is now a postdoctoral fellow at MIT. His research focuses on the investigation of electronic, optical, and vibrational properties of novel 2D materials, such as graphene and transition metal dichalcogenides, using advanced frequency-resolved and time-resolved optical spectroscopy.