Photon upconversion (recombining the low energy of multiple photons to a single photon with higher energy) using ultra-low non-coherent excitation light, such as sunlight, is essential for a variety of potential industrial applications (e.g., solar cell devices, solar fuels, and bioimaging). Chromophore systems—consisting of energetically optimized dye molecule pairs (sensitizer and emitter)—are needed to achieve triplet-triplet annihilation photon energy upconversion (TTA-UC). These energy conversions occur via many intermolecular and intramolecular processes (see Figure 1), which start with the absorption of the low-energy photons and end with the emission of the high-energy photon. TTA-UC is based on triplet energy transfer of optically created sensitizer molecule triplet ensembles to accessible triplet states of the emitter molecules. It is also based on combining the triplet energies of the two emitters, via TTA.1

Figure 1. A photograph of a triplet-triplet annihilation (TTA) photon energy upconversion (UC) film is shown in the background. The cyan dot on the film is the UC emission. The TTA-UC process is also illustrated in the simplified schematic. TTT: Triplet-triplet energy transfer. ISC: Intersystem crossing. S1: First singlet excited state. T1: Triplet excited state. S0 and T0are ground states. The frequency (ν) multiplied by Planck's constant (h) is the energy of the photon.

So that these processes can run for long periods, the dyes need to be protected against oxygen. This is because oxygen effectively depopulates the excited triplet states of the sensitizer molecules, and thus quenches the UC process. It is also important to develop solid-state materials for better device integration. Such materials must be capable of high local mobility for the interacting dye molecules (so that high UC efficiency can be achieved), and they must provide effective oxygen protection. It is difficult, however, to satisfy these two criteria simultaneously.

There are several recent approaches in the development of TTA-UC of solid-state materials. The most common of these techniques involves direct blending of dyes with a ‘photophysically’ inert polymer. With this approach it can be a challenge to solubilize enough dye in the polymer material to achieve the necessary electronic interactions (i.e., exciton migration and annihilation). Dye solubility is therefore typically limited to a few percent.2 In addition, to obtain high UC efficiency, the focus of many approaches has been on polymer materials that have low glass transition temperatures, e.g., rubbery materials (as their polymer chains have high segmental mobility and thus enhanced local molecular mobility of the dyes).3 Rubbery materials, however, have high oxygen permeability.

We have developed a new approach to UC of solid-state materials. With this approach we are able to provide liquid mobility and high dye solubility, combined with extremely low oxygen permeability, and therefore lengthen the lifetime of the UC process.4 We took inspiration for our technique from the hierarchical structure of plant leaves, wherein chromophores (i.e., chlorophyll) harvest light despite the presence of oxygen. This can be achieved because the light-harvesting dyes are compartmentalized into special organelles. In addition, gas exchange through the outer layers of leaves can be regulated to fit the environmental conditions.

In the solid-state-like material that we have developed, dyes are contained inside the liquid core of nanocellulose shell capsules. This ensures high dye solubility and liquid mobility. These capsules are further embedded into a matrix of cellulose nanofibers, which provide mechanical support (cellulose microfibrils are used by plants to enhance mechanical properties). We also deposit a thin (about 9μm) film of nanocellulose on the top of the capsule-composite layer to provide further protection against oxygen. Our final UC film, with a total thickness of about 40μm) is shown in Figure 1. Nanocellulose films have oxygen barrier properties that are about two orders of magnitude greater than ethylene vinyl alcohol (at 0% relative humidity and 23°C), which is a synthetic polymer typically used in high-oxygen barrier applications.5 With our use of cellulose nanofibers, we have therefore produced a fully recyclable and ‘green’ upconverting solid-state-like material.

In our new material, we encapsulate an ensemble of sensitizers to maximize the harvesting of sunlight's deep-red region. We create these sensitizers via mixed condensation of tetrahydroisindole and benzodihydroisoindole. The Q-band (33–50GHz) absorption of the sensitizer family thus covers the 620–690nm (red) wavelength range (see Figure 2). The luminescence signal from the UC film includes the fluorescence spectrum of the emitter. We measured this spectrum in the upconverting excitation regime (maximum wavelength of about 500nm), together with the residual phosphorescence of the sensitizer family (maximum wavelength of about 860nm). 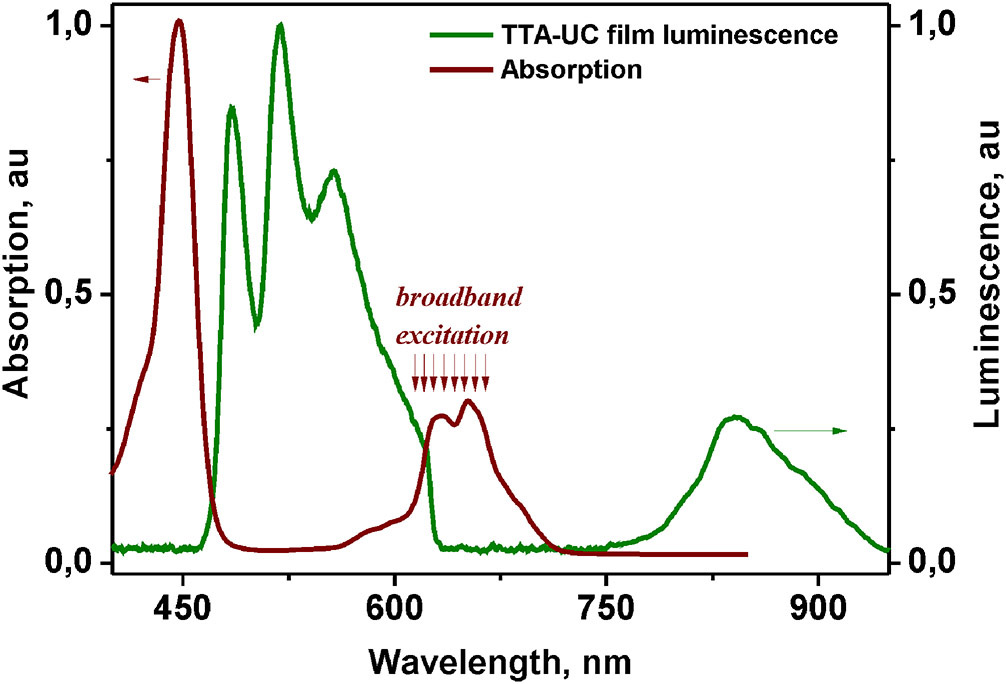 Figure 2. An absorption spectrum of the sensitizer ensemble (red). Also shown is a luminescence spectrum (green) from the UC sample that was excited with broadband non-coherent light. au: Arbitrary units.

When the chromophores are unprotected (e.g., chromophores dissolved in organic solvents) and exposed to molecular oxygen, the TTA-UC process is quenched within seconds. With our film, however, we can achieve long-term upconversion within an oxygen-rich atmosphere. During tests on our material, the TTA-UC signal decreased by only 7.8% after one hour of continuous excitation (with 140mWcm−2) and exposure to synthetic air (20.5% oxygen, 79.5% nitrogen). Furthermore, the residual sensitizer phosphorescence from the film remained about constant over this period. The UC fluorescence has a stronger dependence on the concentration of oxygen that penetrates, because TTA is a bimolecular process. By increasing the thickness of the oxygen protective nanocellulose coating, it is possible to further increase the survival time of the UC process in an ambient atmosphere.

We have designed a new solid-state-like material, with which photon upconverting dyes can be successfully integrated into different devices. We achieve high molecular mobility of dyes and ultra-efficient oxygen protection in our material by encapsulating the dyes within nanocellulose capsules and a matrix of cellulose nanofibers. We now plan to improve the moisture sensitivity of our material and to combine it with an active oxygen scavenger so that the lifetime of the upconversion process can be increased further.

Financial support for this work has been received via a Bulgarian Science Fund reintegration grant RG-09-0002(DRG-02/2) awarded to Stanislav Baluschev, and from the Danish Council for Independent Research for Anna J. Svagan.