A common byproduct of lasing in solid-state media is heat, which can have a significant impact on lasing performance, particularly for high-power systems. When considering how heat affects the optics of the laser medium, we invariably focus on three main consequences. The first is the effect of temperature on refractive index: the thermo-optic effect. Second is temperature-induced stress or strain, leading to further changes in refractive index: the stress- (or strain-) optic effect. The third consequence is physical deformation of the material, which leads to a wavefront distortion, as per a thick lens: the ‘ end-bulge.’

While liquid gain media would be susceptible only to the first effect, solids (crystals, glass, and optical ceramics, for example) are susceptible to all three. Our work examines the interplay between these three features and the accuracy of the models that purport to calculate them.

Attempts to quantify thermal-lensing—for laser-gain materials and windows (optics) for high-energy lasers—date back nearly a half-century.1 Early laser designers noted an increased rate of optical aberrations in the laser beam as the output energies increased, and works by Koechner2 and Foster and Osterink3 (F&O/K) sought to address these problems. These researchers successfully derived expressions quantifying the three effects noted above. However, later works by Cousins4 and Chenais et al.5 identified errors in the tensor-based derivations of these first investigations. Therefore, we sought to test which approach was correct and, for the first time, compare laser glasses within the SCHOTT portfolio for each thermal lensing contributor. We evaluated commercially available laser glasses from the LG and APG (advanced phosphate) series, the former designed for high peak-power, low repetition-rate applications, and the latter for cases that require high average power and high repetition rates.6

For this study we confine our attention to the classic case of a uniformly heated, cylindrical rod with a constant-temperature outer surface, such as we would encounter in the case of a continuous-wave, strongly cooled rod under steady-state conditions. To quantify thermal lensing in this scenario requires calculation of the heat transfer within the laser material, the induced stresses (or strains) due to inhomogeneous thermal expansion arising from ever-present thermal gradients, and the resulting perturbations to the refractive index profile of the laser rod.

We used MATLAB's Symbolic Math Toolbox to repeat the tensor analysis reported earlier by F&O/K, and COMSOL Multiphysics for finite-element method (FEM) simulations, coupling the internal thermal load with the resulting stress and strain. We calculated within the COMSOL environment the point-by-point refractive index perturbations due to either the thermo-optic or stress-optic effect, and numerically integrated these in MATLAB. We then made a direct comparison between the early analytical models and our new FEM simulations, enabling clear discrimination of the correct approach.

Our first finding was that the early researchers had been correct: a relatively small error made by Cousins and Chenais et al. led them to very different results with respect to the stress-optic contribution (see Figure 1). 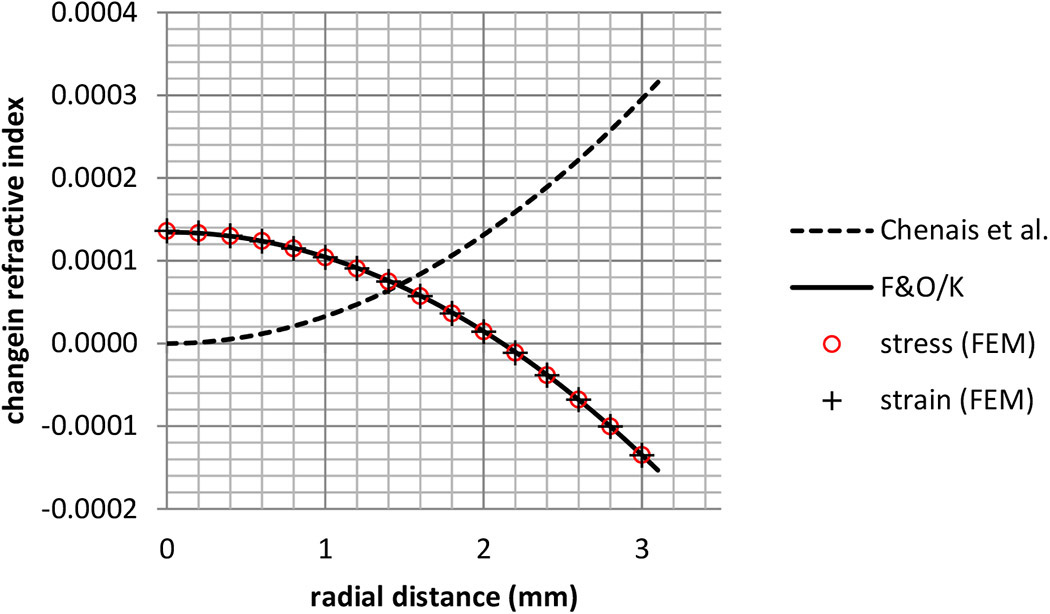 Figure 1. A comparison of calculated thermal lensing due to the stress-optic effect, as shown in papers by Chenais et al., Foster and Osterink, and Koechner (F&O/K), and results deduced from our finite-element method (FEM) calculations. Note that all are in excellent agreement, with the exception of the Chenais et al. solution, which—in addition to the wrong sense of curvature—is also in error in absolute magnitude. However, the vertical offset is unimportant, as only curvature-related factors contribute to the lensing phenomenon.

Second, we found that the FEM simulations and the F&O/K expressions were in close agreement (not shown here) as expected, due to the simple geometry considered in this study. Finally, the glass-by-glass comparison revealed significant differences, particularly with regard to the important thermo-optic effect (see Figure 2). 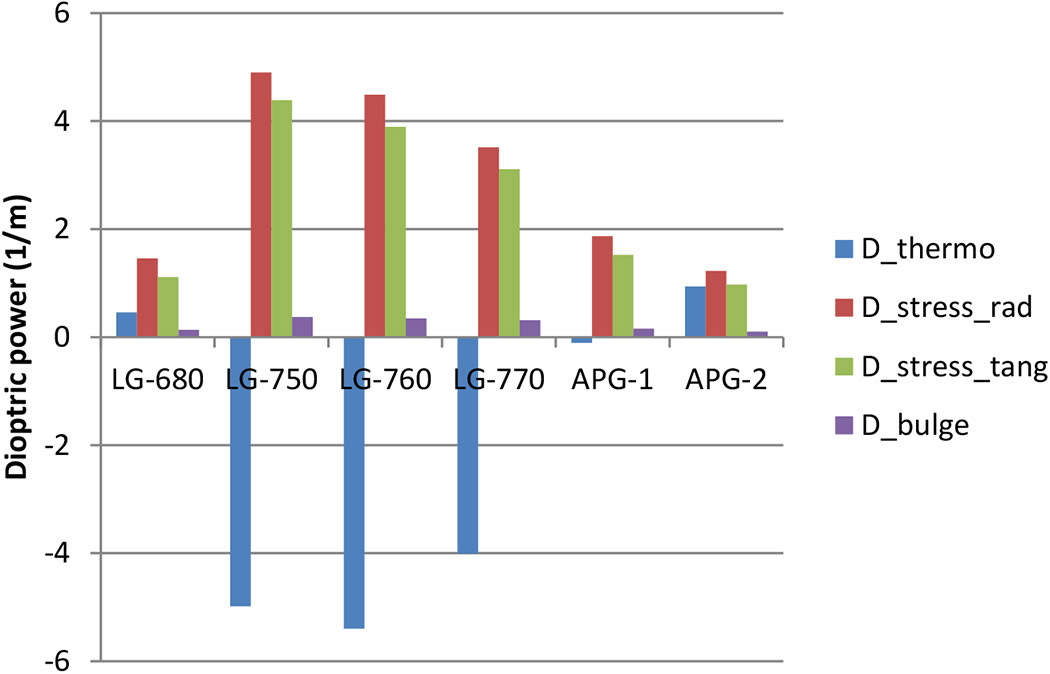 When we combine the three contributions to yield a total thermally induced lens, we see a pronounced compensation of effects for some of the glasses (see Figure 3). In particular, those with a significant (negative) thermo-optic lens generally result in lower dioptric powers of the total lens (less thermal lensing in total), at least for the particular geometry considered herein. 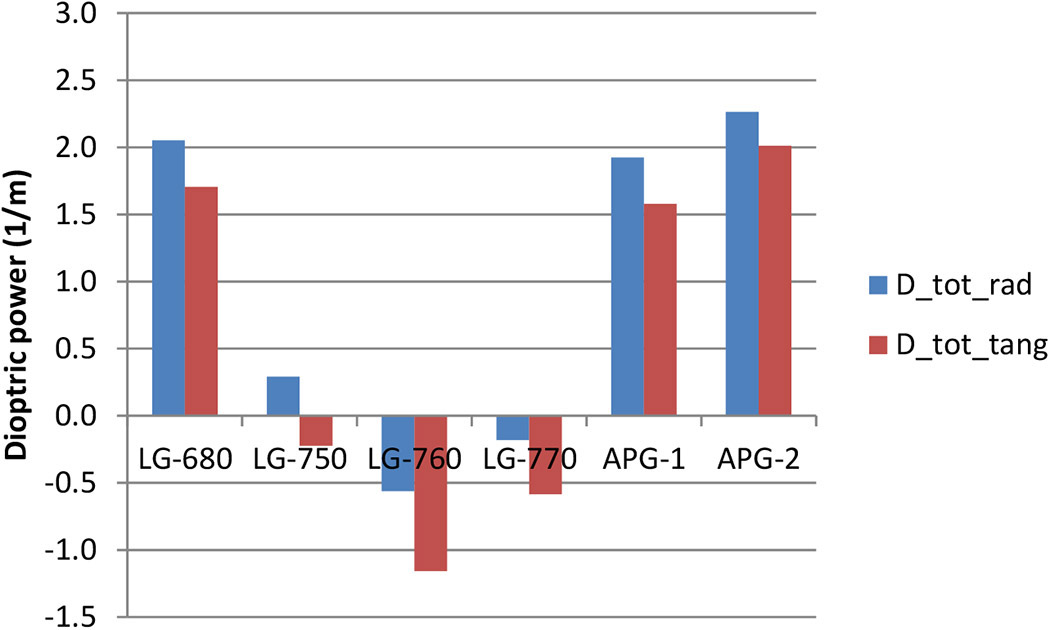 Quantification of the three main contributors to thermal lensing remains a promising means by which to evaluate existing and new materials for high-energy laser systems with respect to induced optical aberrations. Our work has extended previous efforts by helping determine the correct approach to use, and by providing a concrete example of how to achieve a material-by-material comparison for a particular laser geometry. In the future, we may consider modifying our approach for different laser systems (slab geometry, for instance). As an example, we have presented laser performance results where the gain material was a thin glass plate, an often-used geometry for rapid screening of new materials.6 In this case, on-axis absorption decreases exponentially along the beam axis, and we would need to consider this new factor in thermal and stress modeling, as the assumption of a uniform heat load would no longer hold. Chen et al.7 rigorously treat the tensor-based stress-optic effect for slab lasers, but do not couple it to a thermal field. The use of FEM calculations, combined with a symbolic mathematics package to handle the full stress-optic tensor description in an arbitrary reference frame, should allow the modeler to simulate any geometry of interest. In all cases, however, there must exist a reliable database of the relevant material properties to facilitate such calculations. Unfortunately, this is still lacking for some materials of interest.

One of the authors (MJD) is deeply indebted to A. Ballato (US Army, retd.) for his considerable insight and patient tutoring about the intricacies and beauty of tensor analysis.

Mark Davis is a senior principal scientist specializing in materials science in the Research and Development Department. He joined SCHOTT in October 1999 and has been involved with a number of glass and glass-ceramic materials development programs for optical, structural, and electrical applications.

Joseph Hayden joined the SCHOTT Group in 1985, where he has worked in glass composition and process development, with emphasis on laser, nonlinear, and technical glasses. He is currently an R&D research fellow.