Aerosol plumes injected from wildfires and wind-blown dust events can be elevated to the free troposphere and transported over long distances. These aloft plumes can ultimately mix downward, resulting in potential impacts on air quality, climate, and radiation in North America.1 Global and regional chemical transport models and satellite sensors have been used to assess plume transport, but we still lack detailed knowledge of the vertical stratification of smoke and dust and their corresponding optical and microphysical changes during transport.

To directly probe the vertical structure of aerosols requires active precision instruments that can provide range information much like radar provides ranges for large targets. Modern lidars (which use lasers and reflected light to assess a target's distance) are able to measure profiles of aerosol extinction, backscatter coefficient, and the depolarization ratio at multi-wavelengths. They thus can measure the angstrom exponent containing particle size information. That is important in distinguishing smoke particles, which are normally quite small compared to dust. In particular, a coordinated ground-based lidar network can observe the aerosol temporal-spatial distribution and variations on a regional and continental scale. Examples include the European Aerosol Research Lidar Network (EARLINET) in Europe, the Micro Pulse Lidar (MPL) Network in the United States, and AD-Net in East Asia, which are coordinated within the Global Atmosphere Watch (GAW) Aerosol Lidar Observation Network (GALION) on the global scale.2 These provide opportunities to verify the models and satellite products. Moreover, these long-term and continuous lidar observations also provide the climatology of the aerosol plumes' optical characteristics, evolution process, and interaction with the planetary boundary layer (PBL).

The National Oceanic and Atmospheric Administration Cooperative Remote Sensing Science and Technology Lidar Network (NOAA-CREST Lidar Network or CLN) has been operating to observe aerosol vertical distribution in the eastern United States for more than eight years.3 The CLN deploys a multi-wavelength elastic-Raman lidar at the following sites: City College of New York (CCNY) in New York City, at 40.821°N/73.95°W; the University of Maryland, Baltimore County (UMBC), at 39.255°N/76.71°W; and Hampton University, Hampton, VA (HU), at 37.02°N/76.337°W. The high pulse powers allow us to observe and quantify multi-layer plumes, and the multi-wavelength capacity enables us to classify aloft aerosol type (smoke or dust) that cannot be accurately retrieved by any other approach except direct aircraft particle sampling.

While we do not claim to be the first to invent or use lidar, our network is the only one in the northeastern United States and one of the few in the country. The paper is meant to illustrate the use of coordinated lidars for aloft pollution mixing toward the surface. In addition, the use of Raman channels excited by a 355nm laser beam allows a direct measure of water vapor and the aerosol extinction profile. The simultaneous retrieval of water vapor and aerosols together with temperature profiles allows us to explore modifications of aerosol optical properties with relative humidity, which addresses fundamental aerosol chemistry issues.

The CLN lidars use collocated Aerosol Robotic Network (AERONET) sun and sky radiometers, which measure aerosol optical depth to constrain the lidar-derived aerosol extinction profiles and column lidar ratios. That measurement avoids an arbitrary assumption on the extinction to backscatter (lidar) ratio that may result in a large aerosol extinction and backscatter retrieval error. These ground-based systems see plume layers below clouds and are essential to observing the possible interaction of aloft aerosol plumes with clouds and the PBL.4

As an example, Figure 1 shows the time-height distribution of aerosol extinction coefficients from CLN lidars on 6–7 March 2012. Two aloft plume layers and their evolution can be identified at 2–4km and 5–7km altitudes, respectively, on 6 March at the CCNY site. At the UMBC and HU sites, we observed the plume layers at an altitude of 3–8km before 20:00 Coordinated Universal Time (UTC) on 6 March, with more dense plumes appearing at lower altitudes and mixing with the top of the PBL at 1km from 1:30-6:00 UTC on 7 March. 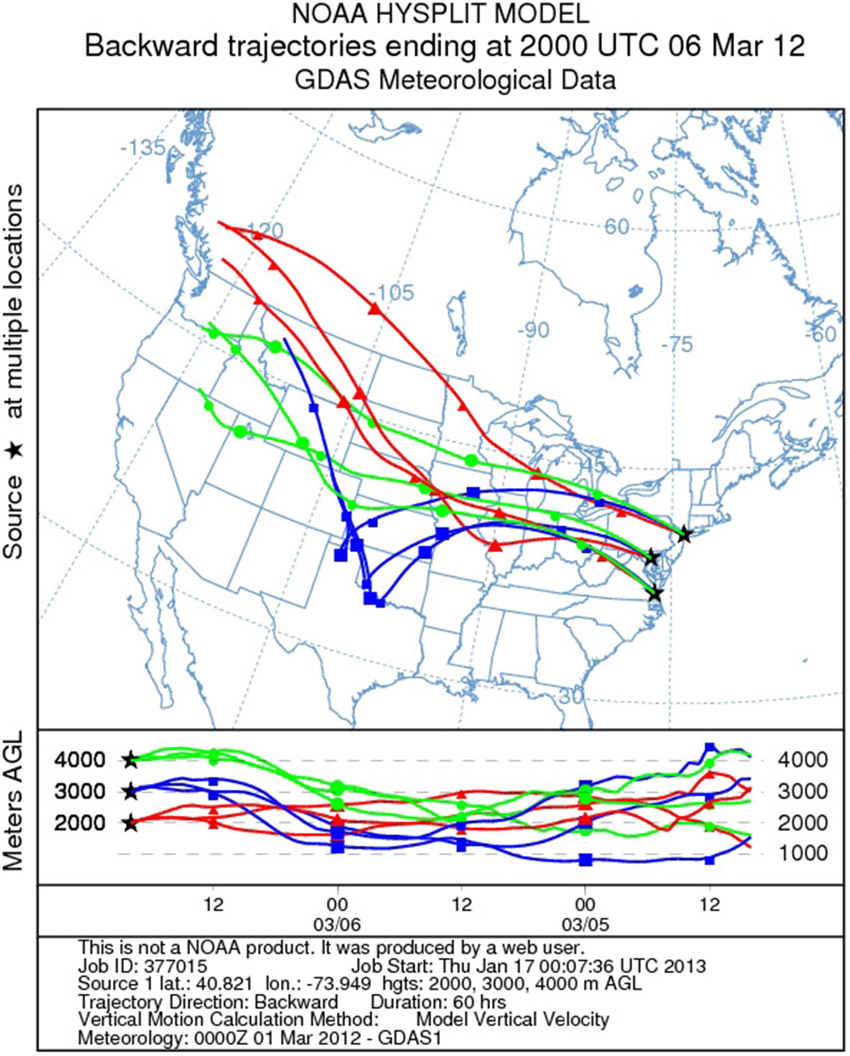 With the lidar-derived aerosol extinction profiles, we could estimate the aerosol optical depths in the PBL and the aloft plume layer. We were able to distinguish a considerable contribution of the aloft plume layer to the total column atmosphere. The three-day atmospheric back-trajectories initiated from the lower plume altitudes of 2–4 km generally show similar transport paths for the CLN sites, which are associated with the smoke and dust events identified in the continental United States by the NOAA Hazard Mapping System.5

Overall, our regional CLN observations demonstrate that the large-scale and multi-layer aloft aerosol plumes were transported to the eastern United States and caused a significant change in aerosol optical properties and potential influences on air quality. The intercontinental and intracontinental transport of Asian dust in the upper layers of the atmosphere and smoke plumes in the lower layers can be clearly identified. Their sources, transport pathways, and potential impacts on local air quality can be assessed with NOAA's Hybrid Single Particle Lagrangian Integrated Trajectory (HYSPLIT) model along with satellite and Environmental Protection Agency (EPA) surface observations.6 Additionally, the CLN range-resolved information can be used to validate satellite column aerosol products such as aerosol optical depth or to complement the satellite column measurements of aerosol loadings,7 as well as explore performance and deficiencies in meteorological outputs from operational forecast models such as the Weather Research and Forecasting model.8, 9 Aerosols are an excellent proxy for the PBL's vertical extent, which is critical for meteorological modeling. In particular, the performance of air transport models such as the EPA's Community Multi-scale Air Quality (CMAQ) model, which is used to forecast fine particulate matter (PM2.5), shows strong diurnal biases compared to surface samplers. That is important because the models can often overestimate surface-level pollution concentrations. The reasons can be diagnosed using lidar vertical profiles.

In the absence of upper atmospheric measurements, the bias could be attributed to either incorrect aerosol transport, physics, or poor emission inventories. However, by a careful comparison of the vertically integrated model outputs to vertically integrated lidar/ceilometer profiles with similar diurnal evolution, we determined there were strong biases in the PBL height prior to convective heating.8

Going forward, we are focusing our efforts on better understanding aerosol and cloud interactions, including modifications of aerosols due to high humidity (hygroscopic properties) and assimilation of PBL heights into meteorological models.

This work is supported by NOAA under the grant CREST agreement NA17AE1625.

Barry M. Gross, professor in the Department of Electrical Engineering, is interested in the analysis of multispectral reflectance data, combined active and passive sensors, and aerosol-cloud interactions. He is the author or coauthor of over 50 articles.