A new high-contrast coronagraphic testbed has been developed to provide solutions for direct imaging of circumstellar environments.
29 December 2014
Mamadou N'Diaye

The search for faint companions to nearby stars—such as potentially habitable terrestrial planets—via direct imaging requires the detection of objects that are up to three orders of magnitude fainter than can be observed with the current generation of ground-based or space telescopes. To observe planets around a significant number of nearby stars, a suitable telescope must have sufficiently high angular resolution and sensitivity. The size of space telescopes is currently constrained by launch capabilities, and segmented designs—e.g., as for the James Webb Space Telescope (JWST)—are suitable for achieving large mirror diameters (about 8m or more). In these designs, however, segmentation, central obstruction, and support structures make high-contrast imaging even more challenging.

Recently deployed high-contrast imaging instruments at ground-based facilities—e.g., Project 1640 at the Palomar Observatory, Spectro-Polarimetric High-contrast Exoplanet Research (SPHERE) of the Very Large Telescope, and Gemini Planet Imager of the Gemini Observatory—can directly image and characterize young, or massive, hot gaseous planets. These planets are up to 107 times fainter than their parent stars in the near-IR (1.2–2.2μm). In addition, the 6.5m JWST will be launched in 2018 and its instruments will offer high-contrast imaging capabilities for these types of objects at longer wavelengths.

We are currently working on a testbed at the Space Telescope Science Institute (STScI), which will be used to develop integrated solutions that combine wavefront sensing, wavefront control, and starlight suppression strategies on relevant aperture geometries. This setup is known as the High-contrast Imager for Complex Aperture Telescopes (HiCAT). HiCAT operates in air at visible wavelengths in our new Russell B. Makidon Optics Laboratory.

Our conceptual optical layout for HiCAT presents several features that enable high-contrast imaging studies. We use a pupil mask to define the central obstruction and support structures of the telescope, and a 37-hexagonal-segment Iris AO deformable mirror (DM) to provide a segmented pupil. We also use two Boston Micromachine continuous DMs to apply phase and amplitude control on both the correction of the residual aberrations1 and to wavefront shaping.2 This leads to the generation of a dark contrast region inside a star's point spread function (PSF). In our testbed we also include a diffraction suppression system that is derived from the apodized (optically filtered) pupil Lyot coronagraph (APLC),3, 4 which was chosen for its high performance capabilities and its design and operation flexibility. We include two cameras for focal (CamF) and pupil (CamP) plane imaging. We have positioned CamF on a translation stage so that we can make direct and coronagraphic phase diversity measurements. We have included additional room in our design for the future implementation of low- and high-order wavefront sensing components such as Zernike wavefront sensors.5, 6 We have designed HiCAT, because of our broadband goals, to be purely reflective (including the apodizer and focal plane mask) up to the final optic (located after the coronagraph), which is transmissive.

In the development of our testbed optical design, we used a novel approach to limit the effects of propagation-induced amplitude errors to below a contrast floor of 10−8, without amplitude correction from a DM.7 HiCAT will be equipped with two DMs for phase and amplitude correction, and therefore our approach guarantees that performance will not be limited by these types of unwanted aberrations. The new type of APLC that we have developed for our testbed includes a shaped pupil8 as the apodizer, a hard-edged circular focal plane mask, and a Lyot stop.4 These novel solutions present several important advantages, including compatibility with any arbitrary aperture shape (i.e., segments, central obstruction, or support structures), increased performance, a reduced inner working angle, and increased robustness to pointing errors and low-order aberrations.

As there are more than 15 components on our testbed, we completed the fine optical alignment of the systems without DM-based wavefront correction (for this phase we replaced the DMs with flat mirrors with excellent surface error quality) and without an apodizer (i.e., a classical Lyot coronagraph). The configuration of HiCAT after this alignment is shown in Figure 1. For an 18mm circular entrance pupil, we have measured a wavefront error of 12±3nm rms from the first optic to the coronagraph mask. The first images that we have obtained using our system (see Figure 2) have been used to validate our design studies and to qualitatively confirm the extremely high optical quality of our testbed. 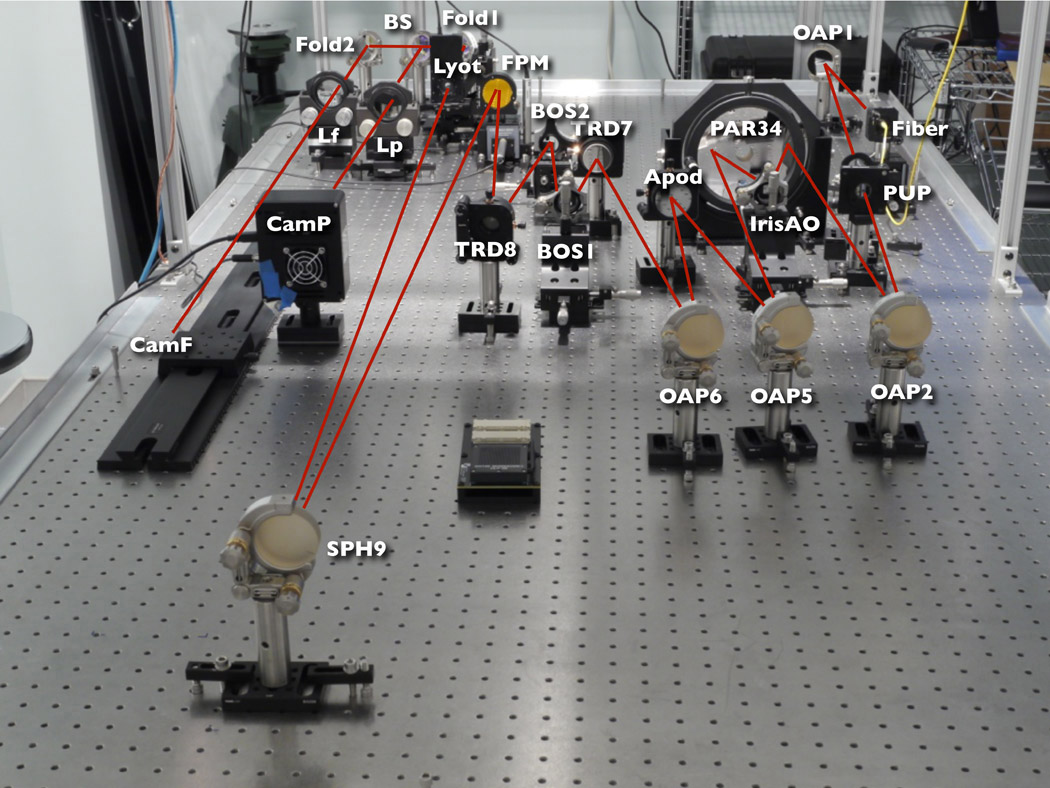 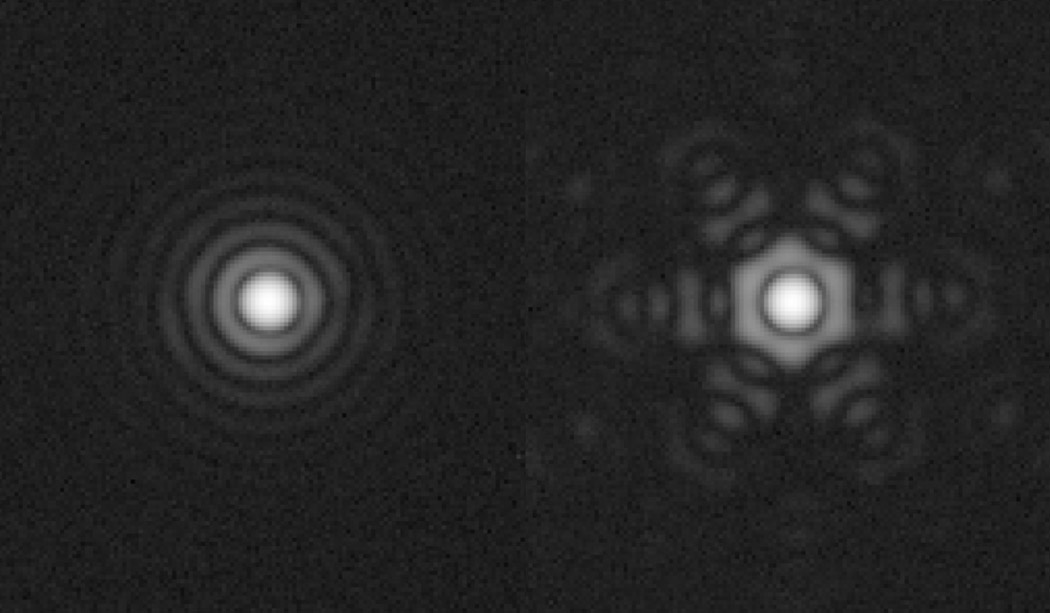 Figure 2. Point spread functions (on a log scale) captured at the level of HiCAT's coronagraph focal plane mask for two different aperture shapes. Left: An 18mm unobstructed circular aperture. Right: A James Webb Space Telescope-like pupil. Seven regular diffraction rings are observed in the image on the left, which confirms the high precision of our alignment and our optics.

We have developed a new high-contrast imaging testbed called HiCAT that has been designed to provide complete solutions for direct imaging of exoplanets in astronomy. By combining wavefront sensing, wavefront control, and starlight suppression strategies on telescopes with complex aperture geometries, more sensitive observations will be possible. Our next steps will involve the implementation of wavefront sensing methods. We also plan to include wavefront control and shaping strategies that use the focal plane camera and one DM, with the Lyot coronagraph (but without an apodizer) to produce a PSF dark hole at a moderate contrast. Future developments such as these will help pave the way toward direct imaging of potentially habitable worlds with space telescopes by about 2030.