Carbon nanomaterials—e.g., fullerenes, nanotubes, and graphene, with dimensionalities of 0, 1, and 2, respectively—possess beautiful chemical bonding arrangements and extraordinary physical and chemical properties:1–3 see Figure 1(a). As is the case with graphite, their carbon atoms are bonded to three neighbors. Diamondoid molecules and graphane (the fully hydrogenated form of graphene) have fourfold tetrahedral bonding (like diamond) and dimensionalities of 0 and 2, respectively: see Figure 1(b). The diamondoid molecule adamantane, which is capped by hydrogen atoms, comprises the smallest unit cage structure of the diamond crystal lattice. Similarly, graphane represents the thinnest possible sheet of diamond. In this context, queries arise regarding what form the thinnest possible 1D diamond thread would take. 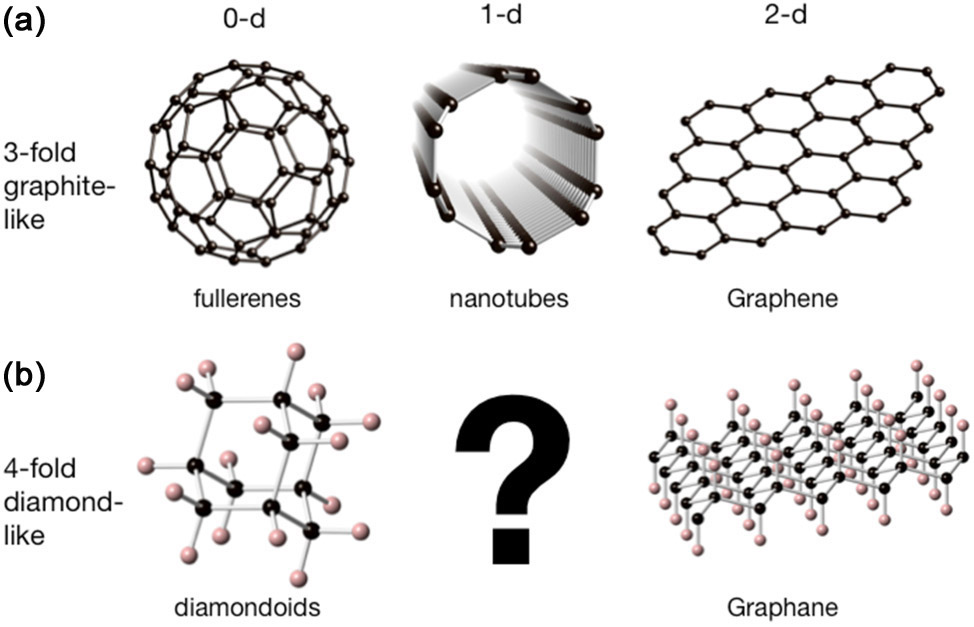 Figure 1. Carbon nanomaterial dimensionality and bonding geometry for (a) fullerene (C60), nanotubes, and graphene, and (b) diamondoid (admantane) and graphane. The black and off-white spheres represent carbon and hydrogen, respectively.

In the 1979 novel The Fountains of Paradise, Arthur C. Clarke proposed a ‘continuous pseudo-one-dimensional diamond crystal.’ It was later predicted that subjecting the molecule benzene4 (consisting of a hydrogen-capped ring of graphite) to a high-pressure chemical reaction could lead to such a 1D nanomaterial.5, 6 We have discovered that when solidified benzene is compressed to 200,000 times atmospheric pressure and then decompressed very slowly, a partially ordered material is created.7 To determine the formation of subnanometer-diameter threads with diamond-like carbon bonding, we employed a combination of first-principles calculations, nuclear magnetic resonance, Raman spectroscopy, x-ray and neutron diffraction, and electron microscopy (see Figure 2). Evidence of diamond nanowire formation inside conventional nanotubes has also been reported.8 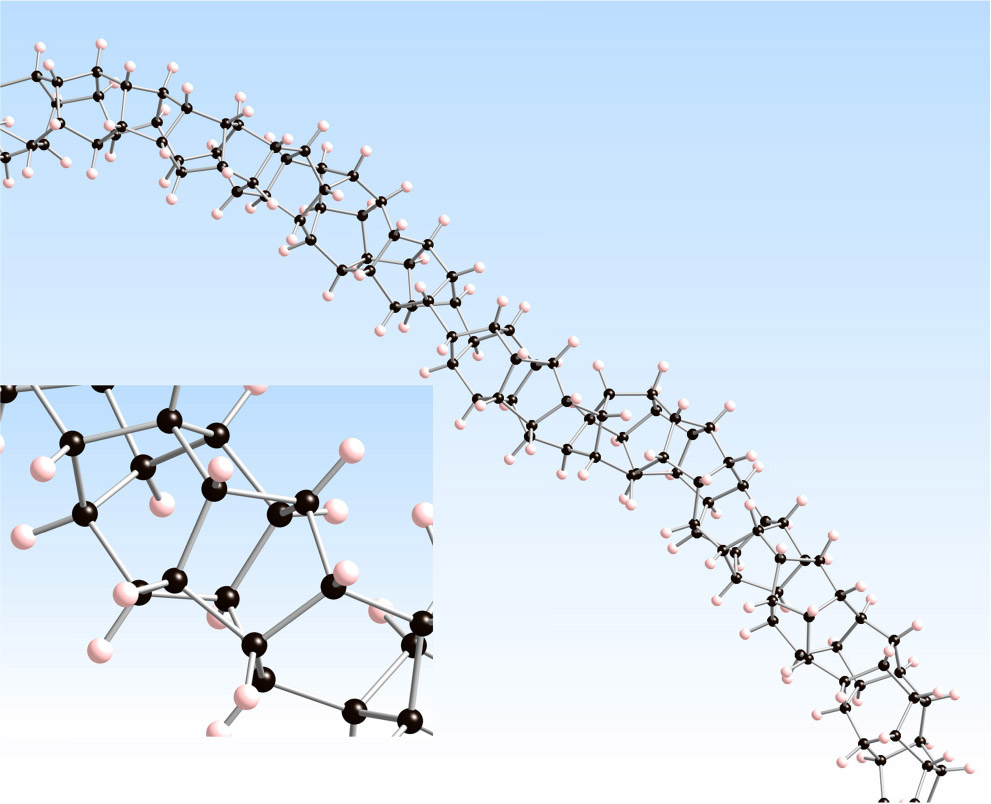 Figure 2. Representation of a single diamondoid nanothread, disordered along its length. The diamond-like tetrahedral bonding arrangement of the carbon atoms can be seen more clearly in the magnified view (inset).

Diamond is the strongest material known, making it reasonable to predict that diamondoid threads would have significant strength. The proposed application for Clarke's ‘1D diamond’ was as an ultrastrong, lightweight cable for a space elevator, allowing travel to satellites in geostationary orbit. After their discovery in 1991, carbon nanotubes (also noted for their extreme strength-to-weight ratio)1 were considered a possible candidate for this science-fiction concept. First-principles calculations on candidate diamondoid nanothread structures have revealed that they may provide strength and stiffness equaling or exceeding that of nanotubes (>1.1TPa).6 More recent calculations have revealed the possibility of a whole family of strong nanothreads, all based on diamond-like carbon but with different bonding configurations.9

The behavior of benzene under pressure has been investigated for nearly a century. However, prior to our experiments, only amorphous reaction products with no clearly discernable order had been observed.10 A narrow Bragg peak, visible in both the x-ray and neutron diffraction patterns of the off-white solid that we synthesized by the slow compression of benzene, provides a clear sign that the material has order.7 Transmission electron microscopy (TEM) images—see Figure 3(a)—reveal parallel striations consistent with the order observed in the diffraction patterns. After sonicating the nanothreads in solvent to break them up, we were able to observe features suggestive of individual threads protruding from the edge of a mass of threads: see Figure 3(b). 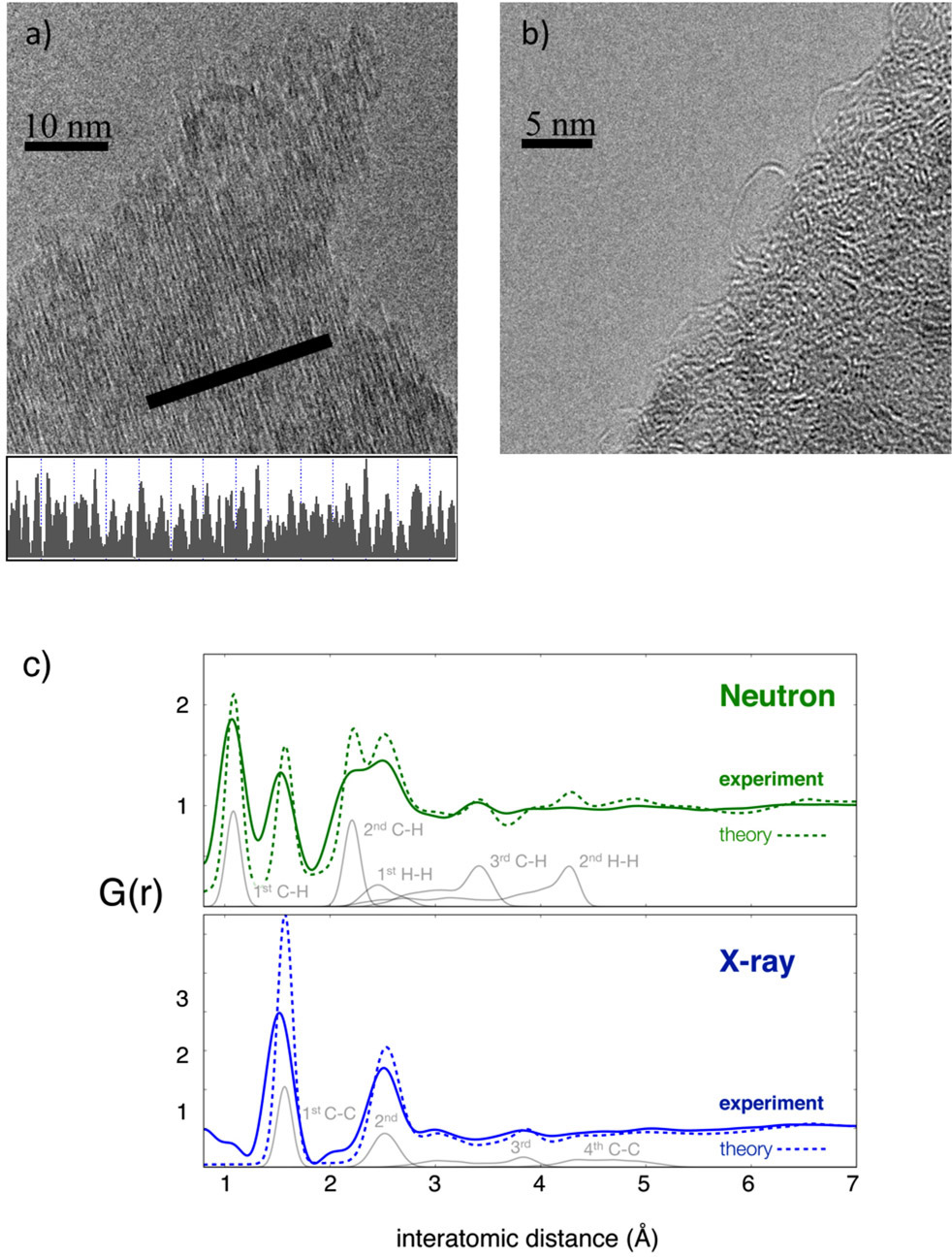 Conventional carbon nanotubes are packed in hexagonal bundles, with one tube surrounded by six others. Due to their similar structural properties, it would be reasonable to expect nanothreads to pack in a similar arrangement. The striations visible in Figure 3(a) are consistent with nanothreads spaced by 6.4Å center-to-center, a value close to the one we predicted using first-principles calculations on model hexagonal thread packings.7The narrow diffraction peak observed in the x-ray and neutron diffraction patterns may represent the ordered packing of the threads. The position and intensity of this peak are again consistent with the predicted spacing between the threads.7

Based on the neutron and x-ray diffraction patterns, we have successfully derived pair distribution functions that show the probability of finding one atom at a given distance from another.7 Neutrons are sensitive to both hydrogen and carbon interatomic distances, whereas x-rays are sensitive primarily to carbon distances. Our nanothread structure model, adjusted to have an appropriate amount of disorder along their length and packed in hexagonal bundles, has predicted pair distribution functions that match experimental results well for both x-rays and neutrons: see Figure 3(c). Other candidate nanomaterial structures, such as graphane and known diamondoid molecules, can be ruled out because their predicted pair distribution functions do not match experiment.

We are only at the very beginning of our investigations into the structure, properties, and potential applications of diamondoid carbon nanothreads. For ease of fabrication, it would be desirable to reduce the pressure required for synthesis. This may be possible through modification of the synthesis conditions or the use of different precursor molecules. Diamond grit is synthesized on an industrial scale at reasonable cost using pressures three to four times lower than those used for the synthesis of nanothreads.11 Similar quantities of nanothreads could in principle be produced if the pressure could be reduced to a similar range. The organic chemistry employed in the synthesis of nanothreads is noted for the versatile kinetic control it affords over reaction products. It may therefore be possible to make many different types of nanothreads, including chemically functionalized or cross-linked nanothreads.

In summary, using experimental and theoretical techniques, we have discovered evidence to suggest that carbon nanothreads can be synthesized from compressed benzene. In future work, we will investigate the possibility of synthesizing many different types of nanothreads, including chemically functionalized or cross-linked nanothreads, from different chemical precursors related to benzene. We will also use advanced aberration-corrected TEM techniques to investigate the atomic level structure of the threads.

John V. Badding is professor of chemistry and physics.