Engineering light-sensitive receptors yields variants that can inhibit and sense neuronal activity, expanding the toolbox of genetically encoded voltage sensors for use in optogenetics.

The interplay of electrical signals within our brains gives us the ability for thought, memory, long-term planning, and empathy. A persisting goal for neuroscience is to understand how these percolating signals encode various thought processes and behaviors, and how their erroneous performance leads to neurological diseases with high societal cost. Traditional approaches for exploring neural circuitry involve low throughput but precise electrophysiological recordings, or large-area functional imaging with lower spatial and temporal resolution. Bridging the two requires a technique that enables single-cell and single-action potential resolution, while detecting brain-wide electrical changes responsible for behavior.

In recent years, genetically encoded fluorescent sensors—with targeted expression to specific cell types—have emerged as tools to monitor the electrical activity of a large neuronal population to correlate this with a given stimulus or behavior. These sensors detect either intracellular calcium concentration or the cellular membrane potential (a more direct measure of the cell's electrical state). Fluorescent calcium sensors have been successful aids in the study of living systems. However, the use of genetically encoded voltage sensors in vivo (to measure membrane potential) remains limited. This is because no single sensor provides both high sensitivity and speed in intact mammalian tissue, which are required for optical imaging of activity in large volumes in vivo.

To address these limitations, we modified Archaerhodopsin-3 (Arch), a microbial rhodopsin (light-driven) proton pump (a protein that can move protons across a biological membrane), which is known for its high sensitivity to voltage change and its fast response of fluorescence intensity. Specifically, we addressed Arch's main limitation: its weak baseline fluorescence. Imaging at this low level of emission requires high laser power, which has thus far prohibited the use of Arch in intact living tissue.

Researchers have widely used Arch for its green light inhibition of electrical signals when expressed in the cell membrane, and more recently have developed its red fluorescent voltage sensing characteristics (see Figure 1). Our research focused on further increasing the baseline fluorescence of Arch while retaining its other optimal characteristics, and showed how it can be used in living organisms. We selected for Arch mutants with enhanced fluorescence in E. coli, transferring the best hits to mammalian neurons. We then characterized their voltage sensitivity by performing simultaneous patch-clamp electrophysiology and fluorescence imaging to measure baseline fluorescence, as well as amplitude and speed of response to changes in voltage. 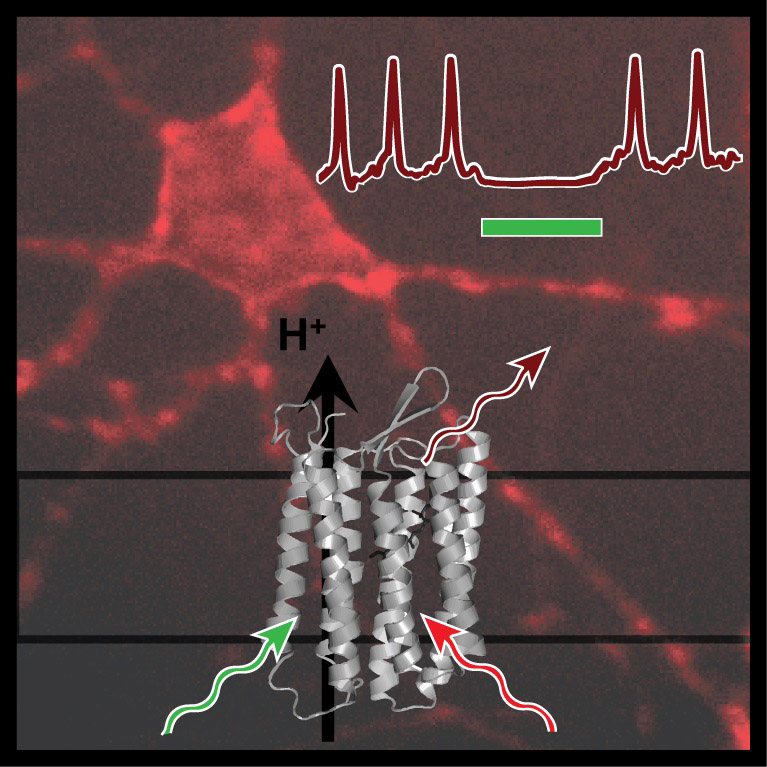 Figure 1. Archer1 is a bi-functional tool for optogenetic inhibition and sensing of neuronal activity. It is able to fluoresce when excited with red light, or pump protons out of the cell when excited with green light. H+: Hydrogen (proton). (Image reproduced with permission from Nicholas Flytzanis, Claire Bedbrook, and Viviana Gradinaru/California Institute of Technology.)

In our work, we discovered two mutants of Arch (‘ Archers’: Arch with enhanced radiance),1 Archer1 and Archer2, with fluorescence 5× and 3× higher than the wild-type sensor, respectively, which enabled imaging at >20× lower laser intensity than the original sensor, and ∼9× lower than most recent Arch variants.2 Archer1's fluorescence, when expressed in the membrane of cultured neurons to which pulses of current are applied to elicit action potentials, is able to closely mimic the electrical waveform at 40Hz firing rate with 25–40% changes in fluorescence.1 Thus, Archer1's higher baseline fluorescence, combined with increased sensitivity and comparable kinetics to the wild type, indicates that low baseline fluorescence is not a fundamental limitation of Arch-based voltage sensors, and that their use in intact tissues will be forthcoming.

We demonstrated our genetically encoded voltage sensor in live nematodes1 (see Figure 2), an organism in which traditional electrophysiology is difficult, and whose cell-cell signaling voltage dynamics are still not well understood. The Archer approach provides a framework to compare previous calcium sensor monitoring of stimulus-evoked activity, and lays the groundwork for continued use of Arch-based sensors in vivo. At the same time, Archer1 retains its ability to pump protons outside of the cell in response to green light, while sensing voltage in response to red, without spectral overlap1 (see Figure 1). As such, Archer1 can be used for all-optical perturbation and monitoring of neuronal circuits. 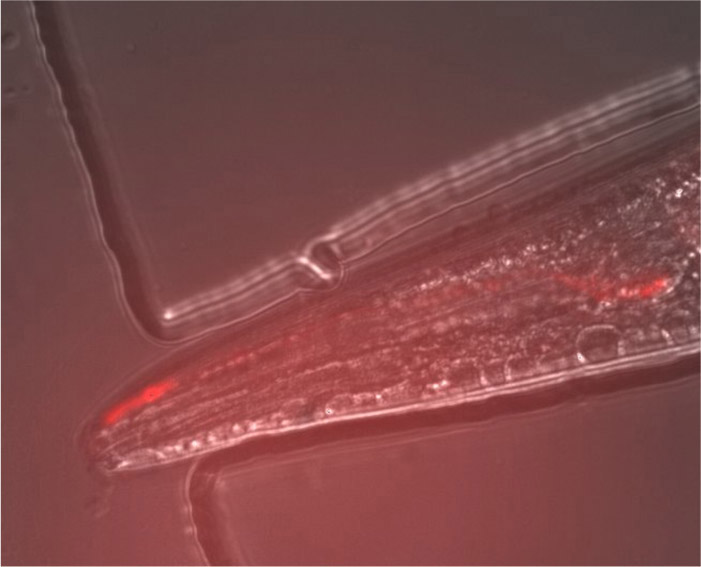 Figure 2. Live worm in a microfluidic chamber with Archer1 expressing in one amphid wing cell (AWC) neuron. The intensity of Archer1's red fluorescence can be used to track the AWC's electrical activity in response to stimulation with odorants such as isoamyl alcohol. (Image reproduced with permission from Hui Chiu and Viviana Gradinaru/California Institute of Technology.)

Our work on Archers1—and that of others on Arch-based2 and various voltage sensors3, 4—has made strides toward implementing this approach to monitor large populations of cells in vivo. Our future work will focus on developing all-optical methods of dissecting neural circuitry in live complex organisms, based on Arch-based and fluorescent protein-based sensors.

This work was possible through support from the National Institutes of Health (New Innovator IDP20D017782-01; 1R21MH103824-01; NIH/NRSA 5T32GM07616); the Gordon and Betty Moore Foundation through grant GBMF2809 to the Caltech Programmable Molecular Technology Initiative; and the Beckman Institute of Caltech.