Improving projections of future sea level rise will require a much better understanding of how climate change will affect glacier flow speeds and the rate of iceberg production. The University of Utah generated the first near-comprehensive map of glacier flow speeds throughout Alaska and has used it to measure iceberg calving rates of ocean-terminating glaciers.

We derived glacier surface velocities using synthetic aperture radar (SAR) satellite data and normalized image cross correlation. This method measures the displacement of image pixel patterns between two satellite images, which we acquire over an interval of 46 days. We use SAR data from Japan's Advanced Land Observing Satellite (ALOS) with Phased Array type L-band Synthetic Aperture Radar (PALSAR). L-Band is advantageous over optical wavelengths because it penetrates cloud cover. It will also penetrate the glacier surface and scatter off internal glacier features, allowing the SAR return signal to remain coherent between two acquisitions, even if the glacier surface appears featureless or has changed due to heavy snowfall. The coherent phase information obtained by SAR systems has traditionally been used to track ground displacements using interferometry. However, interferometry can only detect movement in the direction perpendicular to the orbit path, and is less robust in areas where the ground surface changes rapidly, such as in maritime environments. Normalized image cross correlation is more robust and provides estimates of ground displacement in both the azimuth and range directions.

We measure the horizontal displacement of the glacier surface by cross-correlating images using windows 45 pixels wide. We located a sub-pixel correlation peak by fitting a quadratic function to the normalized correlation coefficients. This method can estimate displacements to precisions 10–100 times smaller than one pixel.1 Since precisions with this method range from 1 to 0.01 pixels, we believe our results are very good. We performed cross correlation on the raw slant-range images organized by signal return time, not geographic location. The displacement vectors were then rotated into horizontal ground displacements. Once we calculated the displacements, we used digital elevation models and satellite positioning information to geocode the slant-range images and correct displacements for image co-registration. Displacements are also corrected for a stereo effect that causes an apparent displacement due to differences in the satellite location at the two acquisition times. This method provides highly accurate estimates of the flow speed.

Using these methods and 5m resolution imagery, we generally achieve uncertainties below 2cm/day and overall biases of <3mm/day. While the SAR data product is high resolution, our method's true spatial resolution is about 225m due to the size correlation windows. We processed a total of 624 frames into 344 image pairs. Creating mosaic images is complicated by the fact that glacier flow speeds change over time. We designed custom software to manually identify which frames best represent each glacier, and then create mosaics from chosen flow vector fields from multiple frames.

The resultant data set represents the first regional map of mountain glacier flow speeds in Alaska. Surface velocities are available for 47,880km2 of glacier ice, which includes almost all major glaciers in Alaska. Examples from the Wrangell-St. Elias Mountains are shown in Figure 1. 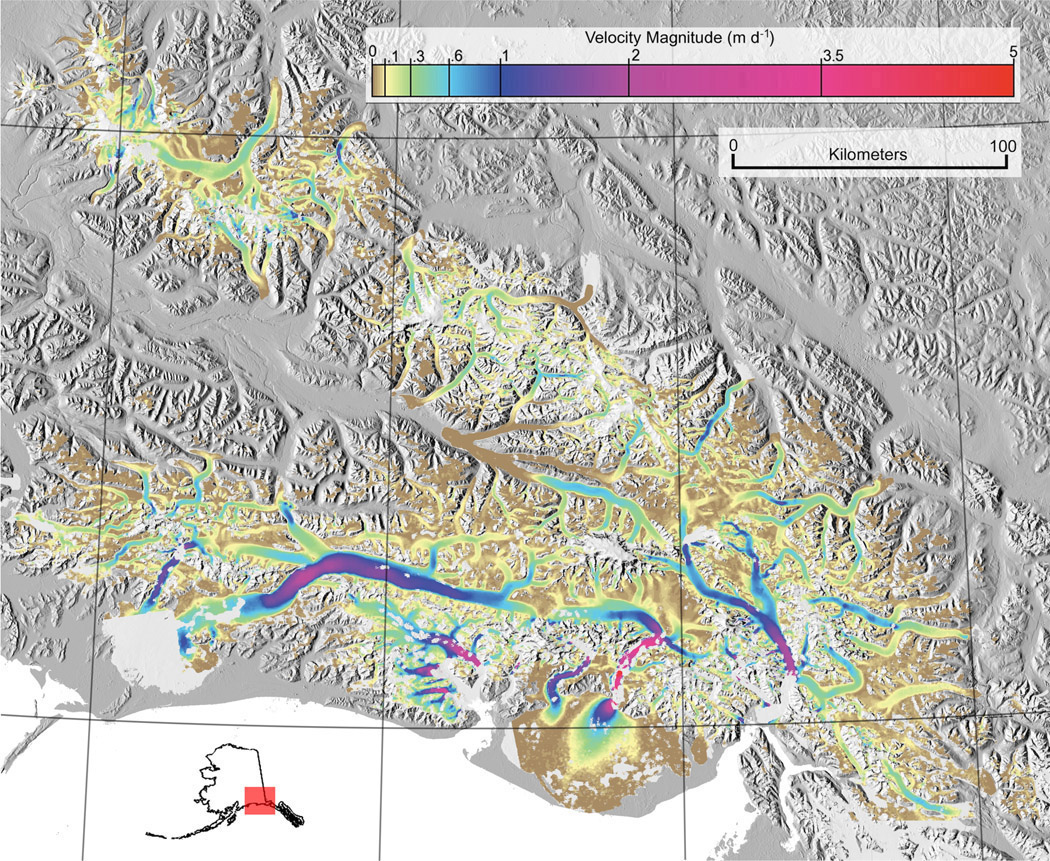 The spatial structure of the flow velocity conforms to our current understanding of glacier flow velocity and climate. Flow speeds generally increase from continental climates toward the maritime coast. Over half of the downstream ice flux from more than 20,000 glaciers throughout Alaska comes from fewer than 20 coastal glaciers. Understanding the dynamics of these glaciers is critical for future efforts to estimate flow-speed-related mass loss in Alaska.

This map has also helped to quantify the volume of ice lost to iceberg calving, because the ice flux through each glacier terminus can be measured using our data. Results showed that approximately 20 cubic kilometers of ice is lost annually in Alaska due to calving alone. This number is equivalent to about 40% of the net mass lost in Alaska each year. Since iceberg calving is controlled largely by fjord shape, a significant proportion of Alaska's mass budget could evolve independently of climate, though how it will evolve is not yet understood.

More information on this data set can be found elsewhere,2 and through the metadata available with the data set hosted at the Alaska Satellite Facility.3 Moving forward, we plan to use these velocity fields to solve for glacier bed topography. We also hope to use similar methods to estimate vertical displacement of the glacier surface and plan to make data management methods computationally scalable so they can be applied globally.

This work was completed as part of the author's PhD research at the University of Utah.

Evan Burgess is a postdoctoral research scientist with a joint position at the University of Alaska, Fairbanks, and the Alaska Science Center of the US Geological Survey.