Synthesis and assembly of 1D semiconductor for solar energy conversion

Over the last few decades, there has been increasing interest in low-cost nanomaterials for novel designs of electrodes for solar cells, artificial photosynthesis, and energy storage. Effective charge collection in these devices requires both high surface area and rapid charge transport in electrodes. When fabricated from small building blocks (such as nanoparticles, NPs), they provide the desired highly accessible surfaces, but NPs offer only low charge mobility. Highly dense grain boundaries and long charge paths (resulting from the electrons' random walk through the mesoporous electrode) reduce electron mobility in an NP film by about five orders of magnitude compared with a single crystal.

In contrast, electrodes based on single-crystal 1D nanowire (NW) arrays and 3D oriented NW arrays assembled from 1D NWs offer rapid charge transport. They have minimal grain boundaries and a directed (that is, short) electron transport path and are, therefore, in demand. Over several years, colleagues and I have focused on fabricating such photoanodes with both rapid electron transport and high surface area for solar cell applications (see Figure 1).

We have developed a ketone-hydrochloric acid solvothermal process to grow 1D titanium dioxide (TiO2) NW arrays (in the rutile crystalline form) aligned perpendicular to a charge-collecting transparent conductive oxide (TCO) substrate.1The NWs are single crystals and have side planes with (110) orientation. They begin to grow within 15min and reach lengths of up to about 10μm within 2h. While they are growing, Cl− ions are selectively adsorbed onto the (110) crystal plane, suppressing further growth of that plane and resulting in oriented NW growth along the [001] direction. Using this NW film, for the first time, we have demonstrated that the electron diffusion coefficient of single-crystal rutile TiO2 NWs is more than two orders of magnitude higher than that of rutile NP films at the same photoelectron density.

We further applied these well-separated rutile TiO2 NW arrays in perovskite-type (CH3NH3PbX3, where X is a halide) solid-state solar cells.2 These show outstanding efficiency and are promising candidates for the next generation of solar cells. In general, they have a sandwich structure: a mesostructured TiO2 layer on TCO serves as the photoanode, which is filled up with perovskite as active layer, capped with a hole transport layer and a metal counter electrode.

The mesoporous TiO2 layer is difficult to fill with solid light-active materials. However, the electron diffusion length in tri-iodide perovskite (CH3NH3PbI3) is about 100nm.3 Our experiments show that the optimal thickness for mesoporous TiO2 is 400–600nm, which balances better light harvesting from a thicker layer with electron/hole transport difficulties due to diffusion in the perovskite. Using aligned-array TiO2 NWs as the photoanode in perovskite solar cells potentially bypasses the trade-off between light absorption and charge transport in mesoporous photoanodes. The high electron diffusion length in the NWs affords directed charge transport (see Figure 2). In addition, filling can be much more efficient than in the compact NP films. Indeed, perovskite solar cells with arrays of 900nm-long TiO2 NWs have reached about 12% (see Table 1), which is the highest efficiency achieved to date with NW-based perovskite solar cells. 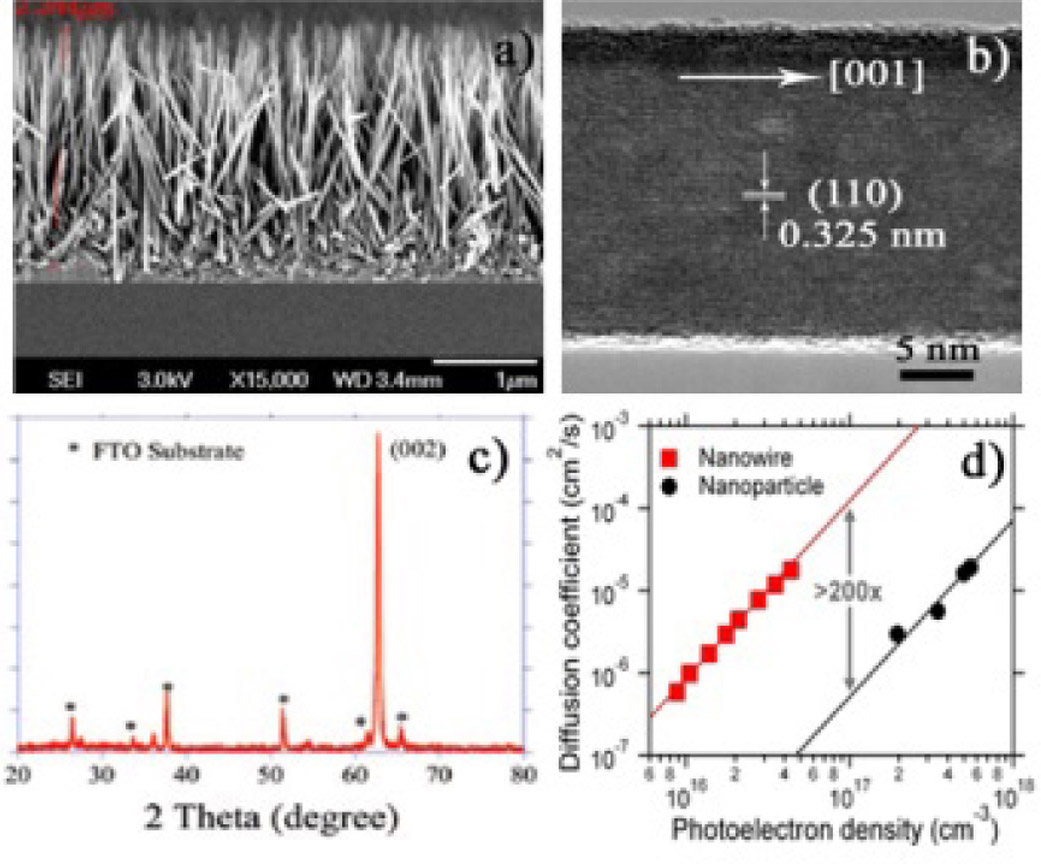 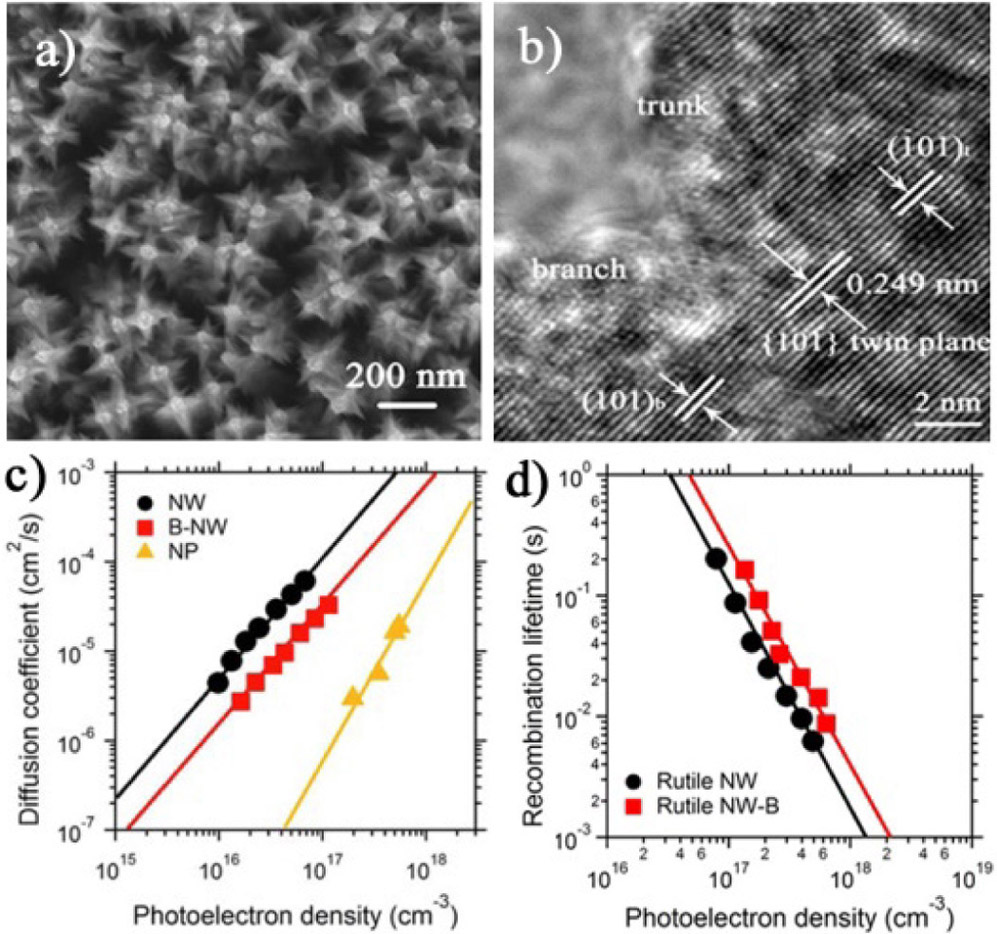 Figure 4. (a) FE-SEM top view of 3D branched TiO2 NW arrays on TCO-coated glass substrate. (b) HR-TEM image at the joint-area between the trunk and branch. (c) Comparison of electron diffusion coefficients as a function of the photoelectron density for TiO2electrodes based on films of 1D NWs, 3D NWs, and NPs. (d) Comparison of recombination of lifetime as a function of photoelectron density for electrodes based on TiO2 3D NWs, and 1D NWs.4 B-NW: Branched nanowires. Rutile NW-B: Rutile-phase branched nanowires.

Although 1D NW arrays have markedly improved electron transport properties compared with NP films, the large volume of free space between the NWs limits the surface area of the arrays, which is relatively low. We have reported the fabrication and fast charge transport properties of oriented assembled TiO2 hierarchical nanoarrays consisting of 1D branches epitaxially grown from the primary trunk.4 The length of the nano-branch can be controlled between 20 and 100nm by adjusting the growth time. Such oriented assembled 3D branched NW arrays with a twin-structured coherent interface have few grain boundaries and lattice defects. We found the charge transport in these single-crystal-like branched nanowire arrays is about 100 times faster than that in NP film. We further demonstrated that the 3D NW arrays have 71% higher surface area relative to 1D NW arrays, which leads to 52% improvement in solar conversion efficiency without affecting electron collection.

In summary, 1D and 3D NW nanostructure-based electrodes we have made show great potential for optoelectronic devices, particularly in solid-state solar cells where recombination is very fast. We are now continuing our research into fabricating high-surface-area, fast-electron-transport electrodes. Our aim is to realize high-performance electrodes for solar energy conversion applications.

Xinjian Feng is a full professor at SINANO. In 2011, he was selected as part of the Youth Thousand Talents Program of China. His research interests focus on the synthesis, assembly, and charge dynamics of inorganic semiconductors for solar conversion applications.