The detection of molecules and their interactions lies at the heart of all biosensing. Achieving biosensing capability at the single-molecule level is, moreover, a particularly important goal. By resolving individual molecular interactions, single-molecule biosensors would operate at the ultimate detection limit and could enable the measurement of biomolecular properties that are obscured in ensemble measurements. A single-molecule biosensor could, for example, resolve the fleeting interactions between a molecule and its receptor, with immediate applications in clinical diagnostics.

We have developed a label-free biosensing platform capable of monitoring single molecules and their interaction kinetics,1thereby achieving unprecedented sensitivity in the optical domain (see Figure 1). Specifically, the platform is able to resolve interactions between complementary oligonucleotides, enabling the detection of DNA strands with a molecular weight of less than 2.4kDa. Furthermore, by monitoring their interaction kinetics, it becomes possible to discern strands with single nucleotide mismatches. 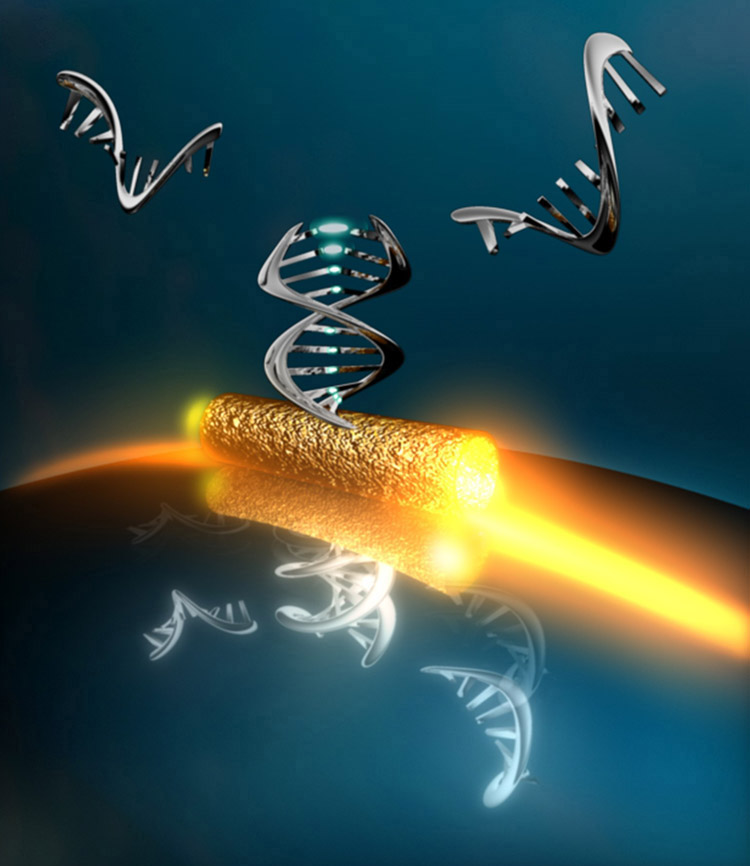 Figure 1. Illustration of our biosensing approach, which is capable of resolving the specific interaction kinetics between single DNA fragments. The optical transducer, which consists of a gold nanowire attached to a glass microsphere, is assembled in a simple three-step protocol. The surface of the nanowire is further modified with oligonucleotide receptors. The interaction kinetics of an oligonucleotide receptor with DNA fragments in the surrounding aqueous solution can monitored at the single-molecule level.1 (Credit: Joseph Alexander, Rockefeller University.)

Our device employs small glass microspheres as optical transducers,2,3 which are capable of increasing the number of interactions between light and analyte molecules. A prism couples a light beam into the microsphere (see Figure 2). The light then remains confined inside the sphere, where it is guided by total internal reflections along a circular optical path, similar to the way in which an acoustic wave is guided along the wall of St. Paul's Cathedral due to so-called whispering gallery modes (WGMs). These WGMs lead to propagation with little loss, enabling even a whisper to be heard on the other side of the gallery. In the optical case, the light beam can travel many thousands of times around the inside of the microsphere before being scattered or absorbed, thereby making numerous contacts with an analyte molecule bound to the microsphere from a surrounding sample solution. Most of the light intensity, however, remains inside of the microsphere, just below the reflecting glass surface, resulting in a relatively weak interaction between the light and the bound molecule. To enhance this interaction further, we attached gold nanowires (42 × 12nm) to the microsphere surface (see Figure 1). When passing a nanowire, the lightwave induces the oscillation of conduction electrons, resulting in plasmon resonance. These nanowire plasmons greatly enhance the light intensity on the nanowire, leading to a very strong interaction between the light and a molecule bound to the wire.4,5 This enhanced interaction results in an increase in sensitivity by a factor of more than one thousand, bringing the optical detection of single DNA molecules within reach. 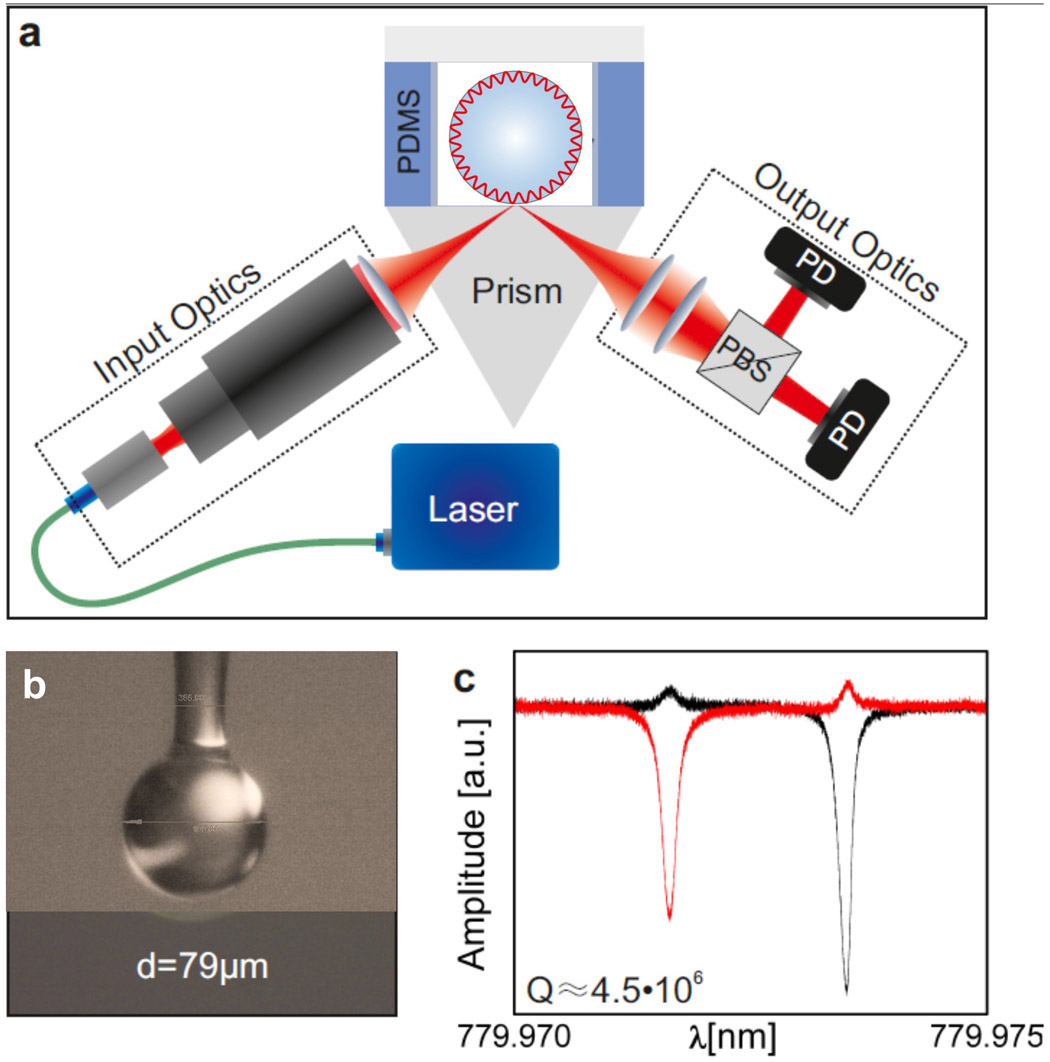 Figure 2. (a) A prism is used to couple light into the whispering gallery mode (WGM) of a glass microsphere. (b) The glass microspheres (∼80μm in diameter) are fabricated by melting the tip of a standard SMF-28 optical fiber. (c) WGM spectra are acquired by swept-wavelength scanning of a tunable laser source, here operating at a wavelength of ∼780nm. In this example, the spectrum shows two resonant signals, one for a transverse-electric (TE) and one for a transverse-magnetic (TM) polarized WGM mode.1 PDMS: Polydimethylsiloxane (sample cell). PD: Photodetector. PBS: Phosphate-buffered saline. a.u.: Arbitrary units. d: Diameter. Q: Q-factor. λ: Wavelength.

For the specific detection of nucleic acids, we attached single-stranded DNA to the nanowire before immersing our device in a sample solution (see Figure 3). When a complementary DNA fragment then binds from solution to the single-stranded DNA receptor that was pre-attached to the nanowire, the strong interaction with light leads to an observable shift of the WGM wavelength. Since light only propagates in a WGM for very precise resonance wavelengths, this shift can be detected with great accuracy.3 Using our biosensor platform, we are able to detect wavelength shifts with an accuracy of less than one femtometer. We have successfully leveraged this sensitivity for the specific detection of single 8-mer oligonucleotides and of intercalating molecules of less than 1kDa. The large Q-factor (4.5×106) indicates that light travels in a WGM only for a very precise resonance wavelength. 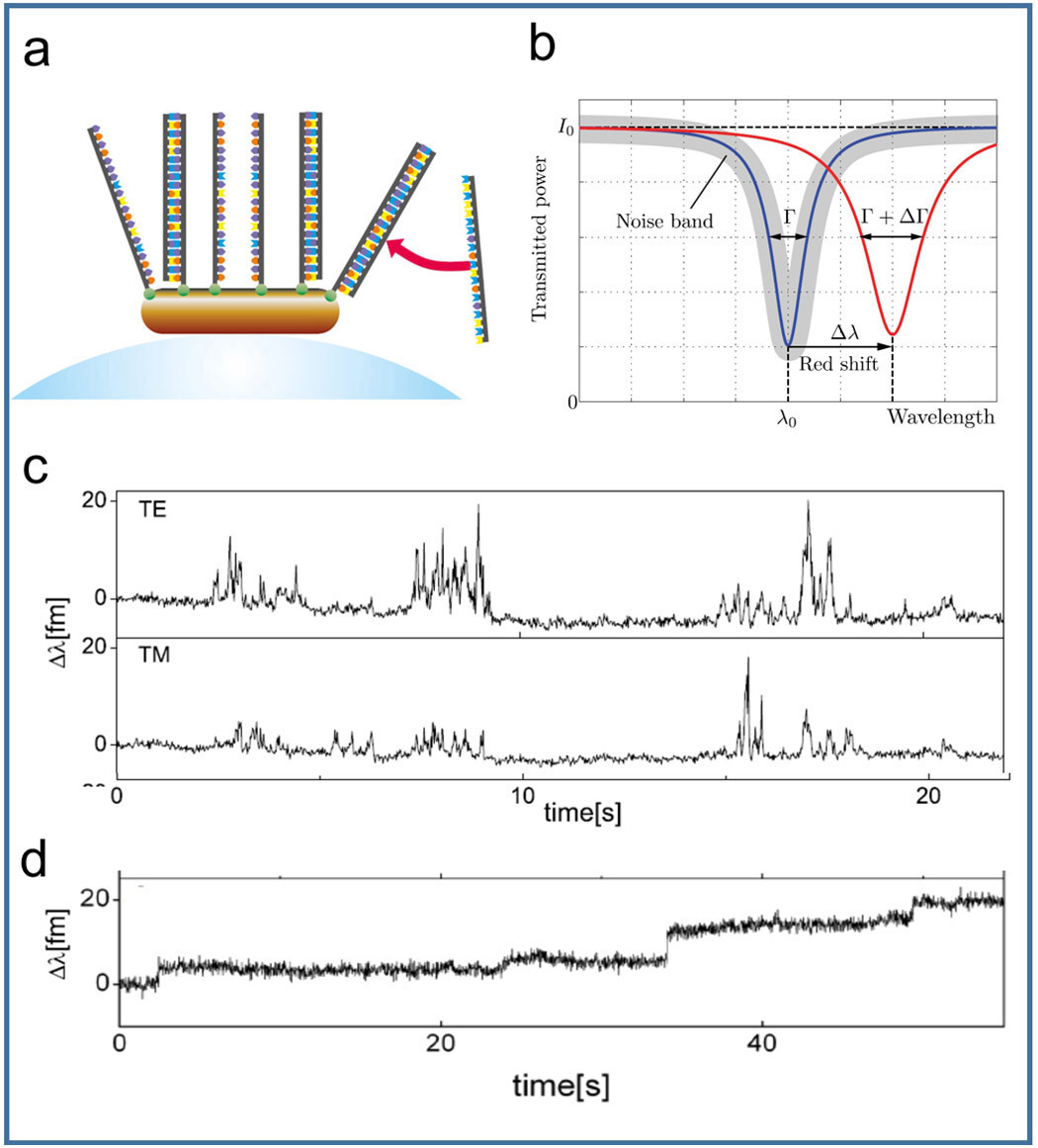 The permanent binding of an oligonucleotide to a single DNA receptor attached to our biosensor would block the receptor for subsequent measurements. A useful single-molecule biosensing device should, however, enable the continuous measurement of many interactions between an individual receptor and its target molecules. Understanding this new paradigm, we chose shorter oligonucleotides as receptors, since they do not adhere strongly to their complementary strand. With these shorter receptors of tailored affinity, it becomes possible to investigate the way in which long DNA fragments interact with each other, and how often the receptor captures a DNA segment from solution. We have tested our optical biosensor functionalized with short oligonucleotide receptors with a sample containing both an exactly matching DNA fragment and a fragment that was not perfectly complementary, due to a single nucleotide mismatch. Based on monitoring their different interaction kinetics, we were able to distinguish the two fragments, pointing to an interesting avenue for the detection of single nucleotide polymorphisms.

In summary, we have successfully developed a single-molecule biosensing platform with optical microcavities. Our design uses oligonucleotide receptors for the specific detection of nucleic acids by monitoring their interaction kinetics. This approach prolongs the sensor lifetime and allows for statistical analysis of single-molecule events. Furthermore, our study shows the possibility of using single-molecule biosensors with receptor molecules that interact only transiently with their target molecules, enabling the detection of a signal that would be obscured in ensemble measurements. Our new biosensing method will make it possible to study these natural kinetics in greater detail and harness the great selectivity, speed, and accuracy of the biological nanoworld in future microphotonic devices. Furthermore, single-molecule biosensing can allow diseases to be diagnosed more rapidly and accurately. We are currently working toward applying our technology in clinical diagnostics.

Frank Vollmer is an independent group leader at the newly established Max Planck Institute for the Science of Light. Since 2011 he has also been appointed as instructor in medicine at Brigham and Women's Hospital/Harvard Medical School in Boston, MA, where he directs a satellite laboratory.