The Balloon Observation Platform for Planetary Science mission is the first stratospheric balloon observatory to obtain images of a comet, enabling new studies of astronomical objects.

On 26 September 2014, the Balloon Observation Platform for Planetary Science mission (BOPPS) observed the comet C/2013 A1, also known as Siding Spring. Images of the comet were the first of their kind taken from a stratospheric balloon observatory, and we expect them to address important questions in the Planetary Science Decadal Survey.1

BOPPS benefits from a 0.8m aperture telescope, a pointing system that achieves stability of 1 arcsecond or greater, and an imaging instrument suite covering the near-UV to mid-IR spectrum, from wavelengths of 300 to 5000nm. Stratospheric balloon-borne telescopes have several important advantages.2 They can make observations from above 99.5% of the Earth's atmosphere at 30–35km float altitudes (as measured by the pressure at the balloon height of 130,000ft, which is about 3mb), resulting in less atmospheric distortion when imaging celestial objects. By comparison, deep space missions (which fly above all of Earth's atmosphere) and jet aircraft (which fly above three quarters of it) are costly. A further advantage is that stratospheric balloons can make observations lasting up to several weeks, which is far longer than for aircraft or rocket flights. They demonstrate a rapid response to observational targets comparable with deep space or jet missions, and there is also the possibility of retrieving the balloon payloads and re-flying them.

BOPPS is a collaboration between NASA Glenn Research Center, the Johns Hopkins Applied Physics Laboratory, and the Southwest Research Institute. The mission's objective was to observe comet C/2013 Siding Spring, part of the Oort Cloud, a distant repository of material little changed since the formation of the Solar System. Oort Cloud comets are pristine, icy bodies that have never been heated by passing close to the Sun.

We scheduled BOPPS' observation for shortly before its extraordinary close encounter with Mars (which was observed by a fleet of spacecraft at Mars and Earth). Comet Siding Spring passed within 100,000 km of Mars on 19 October 2014, and BOPPS observed it on 26 September, when the comet was 114 million kilometers from Mars.

The BOPPS instrument suite consists of two components: the BIRC near-IR multispectral imager3 and the UV-visible (UVVis) near-UV and visible imager system, which has two cameras and a fine guiding system with a fast steering mirror. BIRC's primary objective was to measure the water and carbon dioxide emissions from Siding Spring's coma (the cloud of ice and dust around the nucleus) to help understand the comet's origins and its activity. BOPPS' system uses a commercial camera with a mercury cadmium telluride array detector operating at about 62K, and an integrated cryostat and control electronics. The BIRC instrument, mounted on a separate optical bench to the UVVis imager, includes a nine-position filter wheel and relay optics, all cooled by liquid nitrogen.

We positioned the UVVis instrument on its own bench, with a two-position mirror that directs light either to UVVis or to BIRC. The objectives of the UVVis component were to demonstrate the fine guiding system's ability to stabilize pointing to the sub-arcsecond level, and specifically to demonstrate 10 milliarcsecond error signal generation at 20Hz, and the fast steering mirror corrections at 5Hz.

We launched BOPPS from Fort Sumner, New Mexico, on 25 September 2014 (see Figure 1), and obtained the Siding Spring observations at altitudes above 120,000ft in twilight conditions, when the comet was at an elevation angle of approximately 10°. BOPPS also obtained observations of a second bright Oort Cloud Comet, C/2014 E2 Jacques, the dwarf planet Ceres (the largest member of the asteroid main belt), and several bright stars including Polaris. 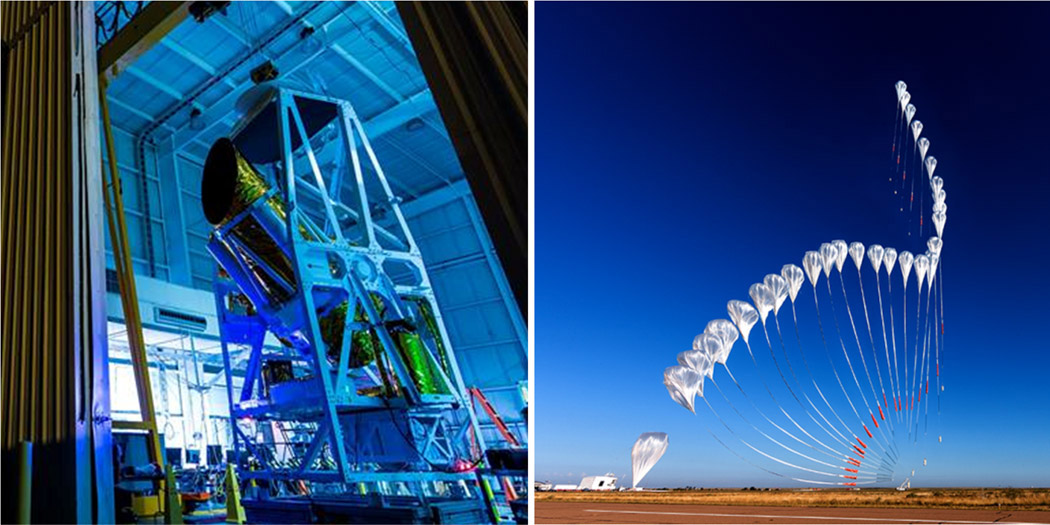 BOPPS encountered the comet Siding Spring in the midst of an outburst, observing in the R-band filters near 640nm wavelength and in the near-IR at wavelengths of 2.47 and 2.7μm for measuring water vapor emissions. The comet's brightness in the R-band decreased by a factor of 2 over the 30 minute time span observed. The inferred water production rate from Siding Spring was 5.1×1027/s (±20%). The rapidity of the brightness change implies that the source region producing the flare was very small in size, at most a few hundred kilometers across.

While imaging Polaris during the daytime, the UVVis instrument achieved 33 and 58 milliarcsecond stabilization on the star in the instrument's azimuth and elevation directions, respectively. During this observation, the root mean square spread in centroid positions was 2–3 arcseconds, which is a measure of the pointing stability of the BOPPS gondola (the platform lifted by the balloon, which accommodates the telescope and instrument payload). This stability improved at night, later in the flight, with pointing errors of

In summary, BOPPS has demonstrated the capabilities of a telescope of > 1m aperture with a pointing system that achieves 1 arcsecond or better stability, and an imaging instrument suite covering the near-UV to mid-IR, all contained as the payload of a stratospheric balloon observatory. In future work, we hope to fly the BOPPS gondola and payload again to observe comets, asteroids, and Trans-Neptunian Objects, with improved pointing control and instrumentation.

Andrew Cheng is the chief scientist in the Space Department of the Applied Physics Laboratory. He was the principal investigator for BOPPS.