Vertical-cavity surface-emitting lasers (VCSELs) were introduced commercially by Honeywell in 1996. Since then, they have been used in many practical applications, including laser mice (optical tracking), laser printing, precision atomic clocks, gesture recognition, solid-state laser pumping, and—most significantly—in short-reach optical fiber links for data communications.1 Although VCSELs are the key enabling technology for modern short-reach optical interconnects (OIs) in data centers, server clusters, and petaflop-scale supercomputers, there are still many opportunities to develop VCSELs further, e.g., for very-short-reach OIs that are being used to replace copper-based connections both within and between silicon-based integrated circuits and integrated photonics systems. It is estimated that the demand for OIs in data centers and supercomputers will reach a market revenue of $520 million by 2019.2 VCSELs are highly reliable, cost-effective, and energy-efficient light sources, and therefore can replace edge-emitting laser diodes in a number of applications.3 VCSELs offer significant advantages, such as higher modulation speeds, lower power consumption, higher beam quality, and lower manufacturing cost.

VCSELs typically contain a quantum well (QW) active cavity area that is confined by two distributed Bragg reflectors (DBRs), as shown in Figure 1. These DBRs are formed via the growth of multiple thin semiconductor epitaxial layers on a semiconductor substrate. In this basic all-semiconductor device geometry, light exits the chip either through the upper or lower DBR, i.e., in a direction that is vertical to the surface of the VCSEL. Standard 850nm VCSELs are the preferred light source for short-reach data transmission across standard multi-mode optical fibers (i.e., up to about 300m in length). In the future (by around 2020), ultra-short-reach (less than 2mm) and very-short-reach (less than 2m) OIs—operating with more than 50Gb/s single channel bit rates—will be required for use in servers and supercomputers. VCSELs with wavelengths of 980nm or more are favored for applications in very-short-reach board-to-board, chip-to-chip, and intra-chip OIs within computers. This is because of their inherently higher and more stable temperature performance compared with 850nm VCSELs. VCSELs that emit at wavelengths of 1200nm or longer are especially attractive for integration within silicon photonics because silicon waveguides have low losses at these longer wavelengths. 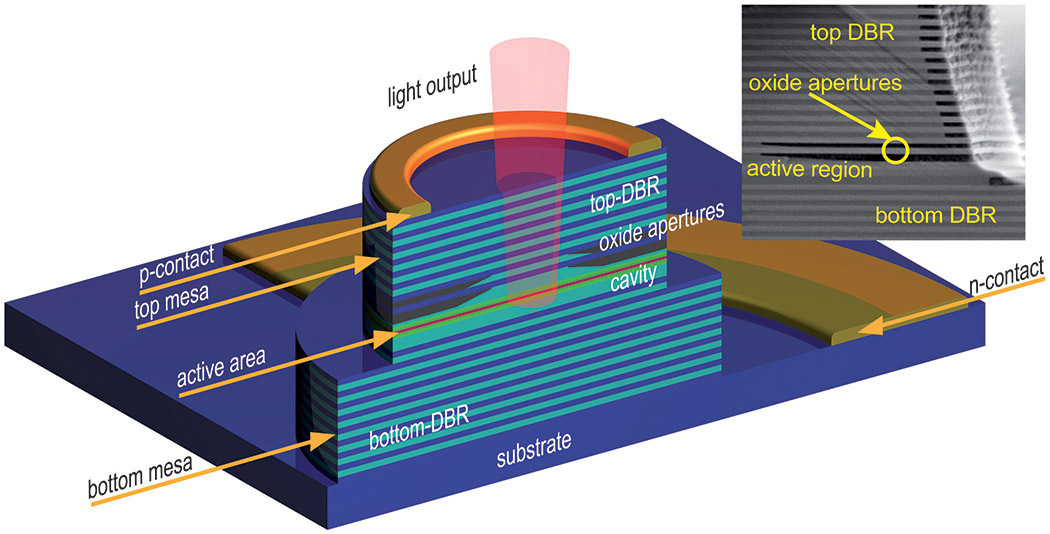 Figure 1. A typical gallium arsenide-based vertical-cavity surface-emitting laser (VCSEL) structure. The design features an active region that contains quantum wells sandwiched between two multilayer mirrors, also known as distributed Bragg reflectors (DBRs), which creates a planar cavity. Carriers are injected through the metal contacts at the top and bottom of the structure, and light is emitted from the top. The current path, from the top to the bottom contact, is defined by insulating, selectively oxidized aluminum arsenide layers (shown in gray), which form an oxide current aperture. The beam profile is governed primarily by the diameter of the oxide aperture. The inset shows a scanning electron microscopy image of a cross-section through the top and bottom DBRs, active region, and multiple oxidation apertures of a 980nm VCSEL.

We find that temperature stability contributes to reducing power consumption of the optical interconnects.4 This is because operation at high speed (with constant current and voltage) across a sufficiently large temperature range allows cooling systems to be removed from the systems and simpler driver circuits to be used instead. In addition to temperature insensitivity, we find that the energy efficiency of VCSELs and their bandwidth must be improved concurrently.4

It is predicted that future exaflop-scale supercomputers will require billions of OIs and high-speed interconnects that operate at rates of at least 25Gb/s, per channel.5 The intrinsic speed (modulation rate) limitation of a VCSEL is determined by the photon density, the differential gain of the active region, and the photon lifetime of the resonator. Strained indium gallium arsenide (InGaAs) QWs or quantum dots can be used at longer wavelengths to increase the differential gain.6 Furthermore, the cavity photon lifetime can be tuned by etching away part of the topmost DBR layer to change its reflectance.7 We have used all these findings to design new gallium arsenide (GaAs)-based VCSEL structures that operate at a wavelength of 980nm. We introduce optical cavity mode-to-peak QW gain offsets to improve the temperature stability of our VCSELs and to enable energy-efficient high-speed operation at high temperatures.8

The maximum bit rate of a physical optical communications link is typically proportional to the VCSEL's bandwidth (in Hertz). We obtained the −3dB bandwidth of our VCSEL device from small-signal modulation measurements. Our extracted f−3 dB frequency results are shown as a function of static bias current for a 980nm VCSEL—with an approximately 4μm-diameter oxide aperture—at 25, 45, 65, and 85°C in Figure 2. With these results, we demonstrate that our VCSELs have a very temperature-stable bandwidth. There is only a small change of 0.76GHz across the 25–85°C temperature range, at a bias current of 3.6mA. 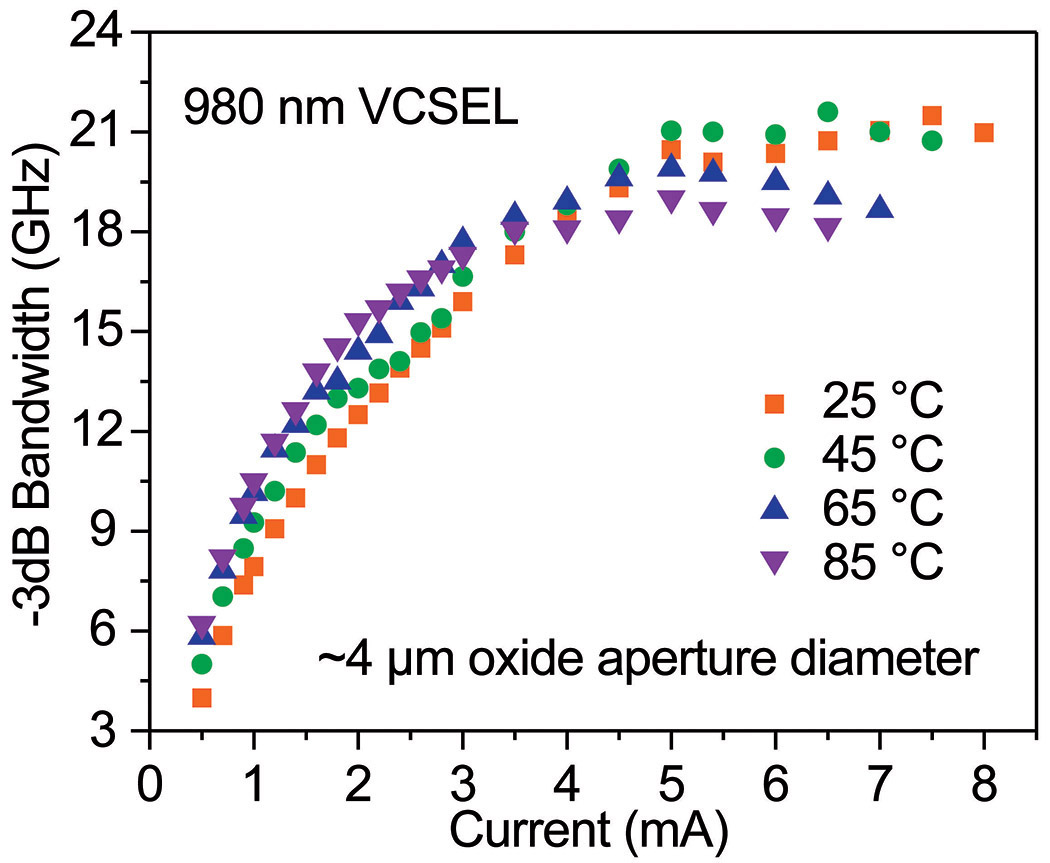 Figure 2. Measured -3dB bandwidth versus bias current for a 980nm VCSEL with an approximately 4μm oxide aperture diameter. Measurements were made at 25, 45, 65, and 85°C.

We can use our VCSELs to transmit 38Gb/s free of bit errors. Error-free transmission requires that the bit error ratio (BER) is less than 1×10−12, i.e., less than one incorrect bit per 1000 billion transmitted bits. The dissipated heat-to-bit rate ratio (HBR)9 is commonly used to compare the energy efficiency of different VCSEL designs. We achieve error-free operation at 38Gb/s with ultra-low HBR values of 197, 179, 177, and 177fJ/bit, for VCSELs with oxide aperture diameters of about 4μm that are operated at 25, 45, 65, and 85°C, respectively. The results of our BER data transmission measurements are shown in Figure 3, along with the corresponding eye diagrams. These eye diagrams are constructed by overlaying sweeps of different segments along a digital data stream. This creates an ‘eye’ that displays the on and off levels and the transitions between them. Our results show that there is no difference in the received optical power when the VCSELs are operated between 25 and 65°C. 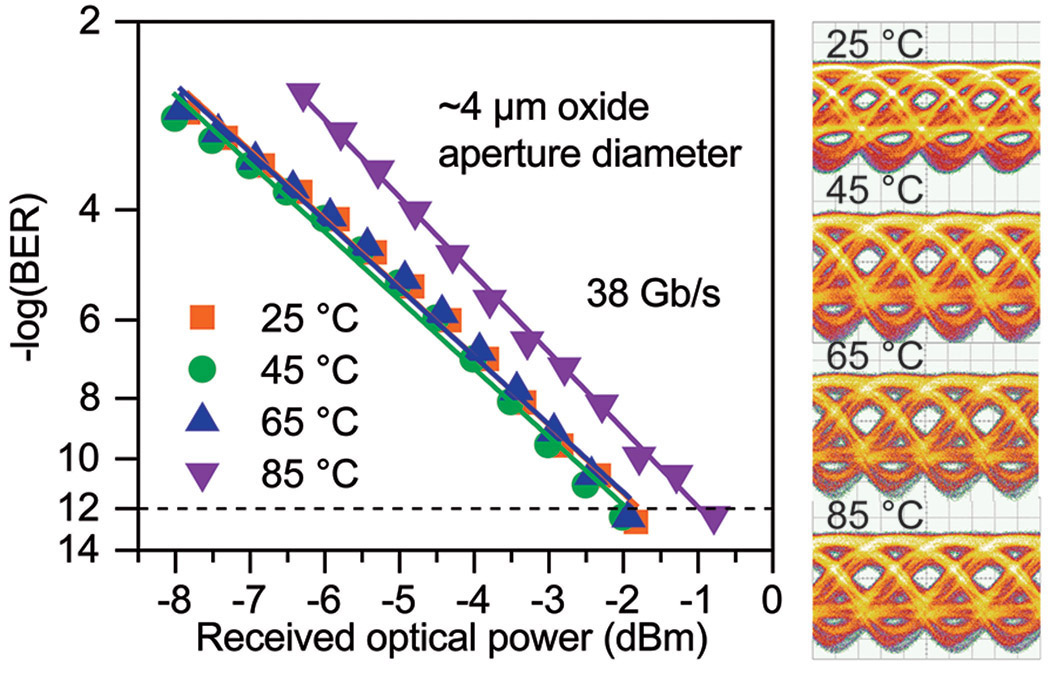 Figure 3. Bit error ratio (BER) versus received optical power of VCSELs with oxide aperture diameters of about 4μm. The devices were operated at 38Gb/s and at the bias current, yielding maximum energy efficiency across 5m of multi-mode optical fiber at different temperatures. Corresponding eye diagrams (see text for details) are also shown.

We have shown that energy-efficient operation of a 980nm oxide-confined VCSEL is possible at high temperatures. We achieve error-free performance at 38Gb/s and 85°C, with a record low dissipated heat energy per bit (177fJ). We have thus demonstrated, for the first time, that high bit rates can be attained simultaneously with high operation temperatures (with very low energy dissipation per transmitted bit). Our VCSELs are particularly well suited for short, very-short, and ultra-short-reach inter-board, chip-to-chip, and intra-chip optical interconnects where temperature stability, −3dB bandwidth, link density, and minimization of waste heat are critical. Over the next two years we plan to optimize our devices further by focusing on higher differential gains, better thermal conduction, and lower parasitics. We hope, therefore, to achieve even higher VCSEL maximum bit rates, with the lowest possible energy consumption and greater operating temperatures.