Calibration of the METIS coronagraph UV channel onboard Solar Orbiter

In-flight radiometric calibration procedures will be used to track changes in instrument throughput during the mission and to verify pre-flight laboratory tests.

The European Space Agency's Solar Orbiter satellite is due to launch in 2017. During the mission, instruments on the spacecraft will make detailed measurements of the inner heliosphere and of the solar wind. The METIS coronagraph1 (Figure 1) is one of the spacecraft's scientific payload instruments that will provide simultaneous UV and polarized-visible-light imaging of the solar corona. Comprehensive and accurate in-flight calibration procedures for the METIS instrument are therefore required. For the METIS UV channel, these procedures must achieve absolute calibration of the solar corona UV brightness, tracking of changes in the instrument throughput along the course of the mission, and verification of previous laboratory radiometric calibrations. 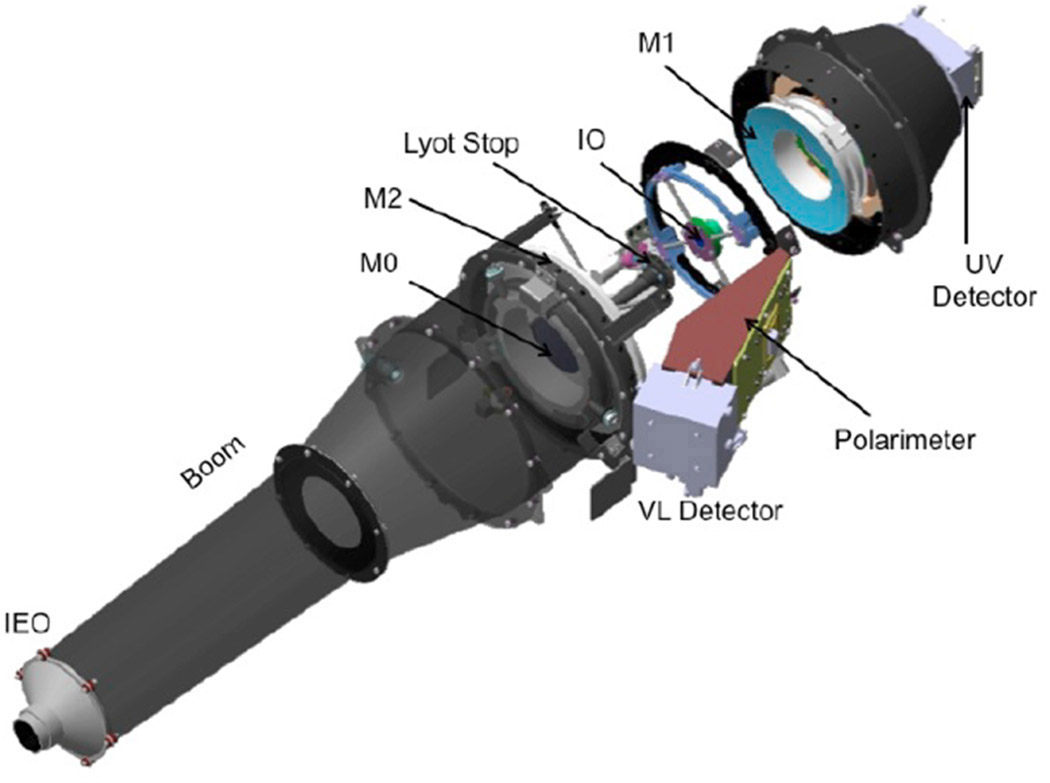 The best reference targets for calibration of the channel2,3 (Figure 2) are a set of well-known UV-emitting young stars (O, A, and B spectral types). Their photospheres produce bright, far-UV continuum spectra that are stable over long timescales. These spectra lie in the wavelength band of the instrument's UV channel, i.e., a narrow ±10nm band around the neutral-hydrogen (HI) Lyman-alpha (Ly-α) 121.6nm spectral line.

As part of our radiometric calibration procedure, we make the intrinsic assumption that the irradiance from our reference targets is temporally stable. We have therefore selected a set of potential reference candidate stars for the METIS calibration that fall within the instrument's field of view (FoV) along the orbit of Solar Orbiter. In addition, the selected objects have previously been observed by the UV Coronagraph Spectrometer onboard the Solar and Heliospheric Observatory,4, 5 the Solar Stellar Irradiance Comparison Experiment (SOLSTICE) of the Solar Radiation and Climate Experiment (SORCE), the Spectroscopy for Investigation of Characteristics of the Atmosphere of Mars (SPICAM) instrument on Mars Express,6 and the International UV Explorer.7 This set of targets is already used for radiometric cross-calibrations of data from these space instruments.1 Main sequence stars of A and B spectral types (such as those in the SOLSTICE and SPICAM catalogues) have higher effective temperatures than Sun-like stars. The peak wavelengths of the blackbody emissions from their photospheres therefore fall within the UV/far-UV. We use the standard SPICE (Spacecraft Planet Instrument C-matrix Events) information system,8Solar Terrestrial Relations Observatory spacecraft routines and tools, and orbit kernel files on the Solar Orbiter consolidated report on mission analysis9 to determine the METIS FoV equatorial coordinates (Figure 3). We also use these powerful tools to investigate the need for spacecraft off-pointing maneuvers so that targets of opportunity—outside the main FoV—can be observed by METIS.

Figure 3. Phase trajectories for the METIS field of view (±3°) in the plane of the equatorial coordinates during the nominal Solar Orbiter mission, after launch on 27 July 2017 (light green). Red points represent some far-UV-emitting targets of opportunity. The black line represents the ecliptic. Dec: Declination. RA: Right ascension.

Imaging of the UV solar corona will be performed with a UV detector assembly subsystem that is based on an intensified active pixel sensor (APS).10 Since this device is optimized for HI Ly-α line detection, each pixel of the selected detector produces basic information on the intrinsic coronal irradiance, in the unit of digital counts. We can determine the count rates associated with the reference targets, as well as the corona, at the intensifier focal plane (a microchannel plate device) level or directly on the APS device (because the intensifier gain and the product of the APS quantum efficiency and pixel fill factor are the same).

We will perform the METIS solar corona radiometric calibration by converting the measured counts into radiance values (expressed in physical units of phs−1sr−1cm−2). We will derive the conversion factor by comparing the METIS UV detector count rates and the absolute measured fluxes of the same reference stars obtained during the previous missions. The SOLSTICE/SORCE catalogue contains absolute calibrations (to a few percent) of stellar spectra. This database of reference far-UV targets also includes the actual calibrated spectra, from which the fluxes incident on the entrance pupil of METIS will be derived. We have obtained the star UV fluxes by convolving those spectra with the transmission profile of the interference filter that will be used to select the METIS UV-channel narrow band. Consequently, we will calculate the pixel count rate as a function of the position on the UV focal plane. In this step, we will account for the UV throughput given by the product of the vignetting function (Figure 4), the reflectivity of the mirrors, the filter transmissivity, the detector quantum efficiency, and the telescope point spread function on the UV focal plane.

To track instrument throughput changes, one of the most important properties of the coronagraph we must measure is the telescope's effective area.11 We will determine the effective area before the METIS launch using both theoretical ray-tracing and engineering and physical measurements at the Altec OpSys facilities in Turin, Italy.12 We will use these measurements with the known reference fluxes to predict the expected counts from stars in our observing program. We will then compare the actual in-flight observations and the predicted counts to evaluate the pre-launch effective area and to perform our radiometric calibrations. We will also observe the same calibration targets throughout the course of the mission. This will allow us to monitor the system throughput and track possible variations that are caused by contamination or degradation effects connected to residual instrument outgassing or to the harsh radiation environment.13

We are currently designing a comprehensive in-flight radiometric calibration plan for the UV channel of the METIS instrument on the forthcoming Solar Orbiter mission. We will use previous UV observations from a number of space instruments in our calibration campaign. Our procedures will track changes in the instrument throughput during the course of the mission and will be used to verify pre-flight laboratory calibrations. We will test these procedures on the METIS engineering model during the spring of 2015. We will also continue to search for other useful UV sources (i.e., planets) that transit within the METIS FoV during the Solar Orbiter mission.

The authors thank the METIS project office personnel and others that have contributed to this work, including John Daniel Moses, Giampiero Naletto, Gianalfredo Nicolini, Piergiorgio Nicolosi, Udo Schuehle, Daniele Spadaro, Thomas Straus, Luca Teriaca, and Michela Uslenghi. This work is supported by the Italian Space Agency under contract I/013/12/0.

Mauro Focardi is a young scientist fellow. He works on technology and instrumentation for space and ground-based astrophysics, focal-plane-array sensors, detector readout electronics, and instrument control units for payloads on scientific satellites.