It is the generally accepted view that heating of the solar corona is caused by magnetic reconnection in small-scale structures, i.e., with typical sizes less than 100km (0.15arcsec).1 The first extreme UV (EUV) observations of such small-scale structures were conducted with the High Resolution Coronal Imager (Hi-C) telescope that was launched on a sounding rocket in July 2012.2 Images from Hi-C had an angular pixel size of 0.1arcsec/pixel and revealed magnetic braiding in coronal loops. EUV images that were obtained simultaneously with the Atmospheric Imaging Assembly (AIA) of the Solar Dynamics Observatory (SDO)3—at 0.6arcsec/pixel—did not, however, resolve the same braiding.

EUV telescopes with angular resolutions of 0.1arcsec/pixel are now being developed at the Lebedev Physical Institute as part of the Small Satellites for Fundamental Space Research (MKA-FKI) program of the Russian Federal Space Agency.4 These high-resolution telescopes must be constructed from highly stable mechanical components and include large-area high-sensitivity CCD detectors. The most essential part of their design, however, is the precise large-aperture EUV mirrors they include.

As with most EUV telescopes that are used for solar corona observations, we implement a Ritchey-Chrétien (Cassegrain) optical layout with two multilayer mirrors in our design. Our multilayer mirrors (see Figure 1) consist of a multilayer coating sputtered on a substrate. The surface shape and roughness of this substrate defines the ‘imaging’ quality of the mirror itself. To achieve high optical quality and high efficiency of the multilayer coating, we require a precise surface shape (root mean square of about 4nm) and a low surface roughness (about 0.2–0.3nm).

Figure 1. Photograph of super-polished extreme UV mirrors with sputtered multilayer coatings. These mirrors have been developed for the Telescope and Spectrograph for Solar Investigations (TESIS) instrument onboard the Complex Orbital Observations Near-Earth of Activity of the Sun (CORONAS)-Photon satellite.

We used x-ray diffuse scattering (XRDS) and atomic force microscopy (AFM) to make measurements of MSFR and HSFR surface deviations. The spatial frequency of XRDS corresponds to the 10−2–1μm−1 range, and the spatial frequency of AFM corresponds to the 10−1–102μm−1 range. The results from a series of XRDS and AFM measurements that we conducted on different substrates are in excellent agreement for the regions where the two methods overlap (see Figure 2). 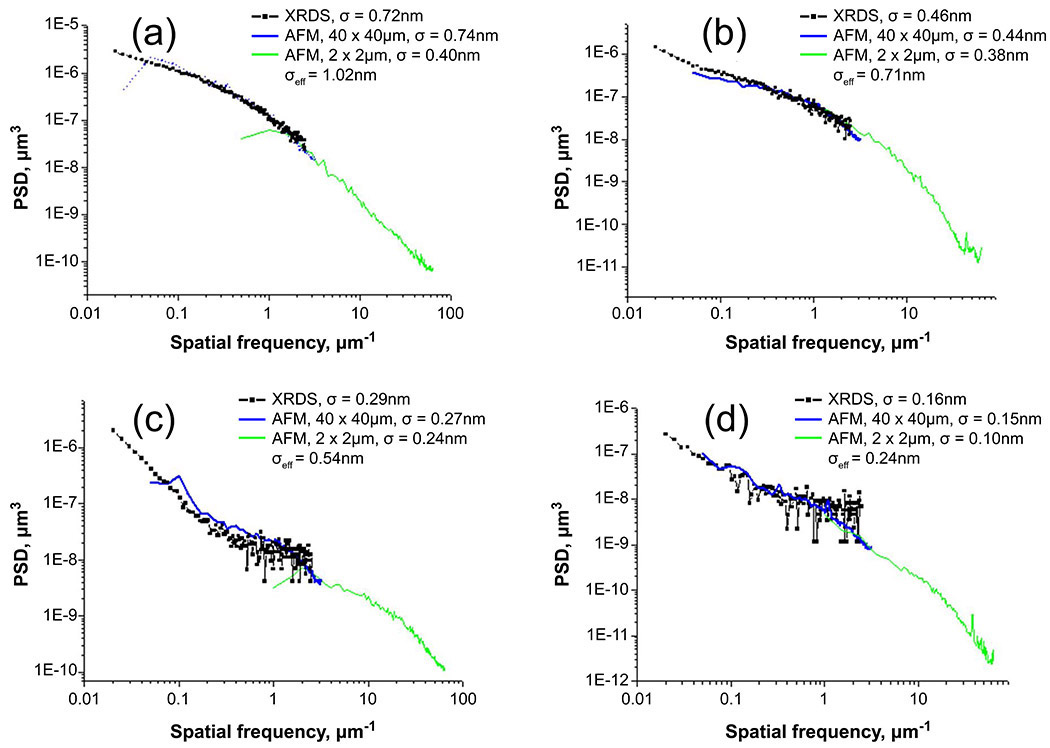 We used traditional pitch polishing techniques, with successively smaller polishing grain sizes, to achieve σe# of about 1.5nm for our different substrates. We then exposed the substrates to chemical-mechanical polishing to reduce the PSD(v) by almost an order of magnitude and to produce a σe# of about 0.36nm. By changing the polishing regime and reducing the grain size below 1μm, we were able to decrease the PSD(v) even further (see Figure 3). We have tested several substrate materials, including fused silica (different grades), ultra-low-expansion glass, and Zerodur. We consistently produced the finest roughness (σe# of about 0.25nm) on a KU-1 (Russian-produced fused silica grade) fused silica substrate.6 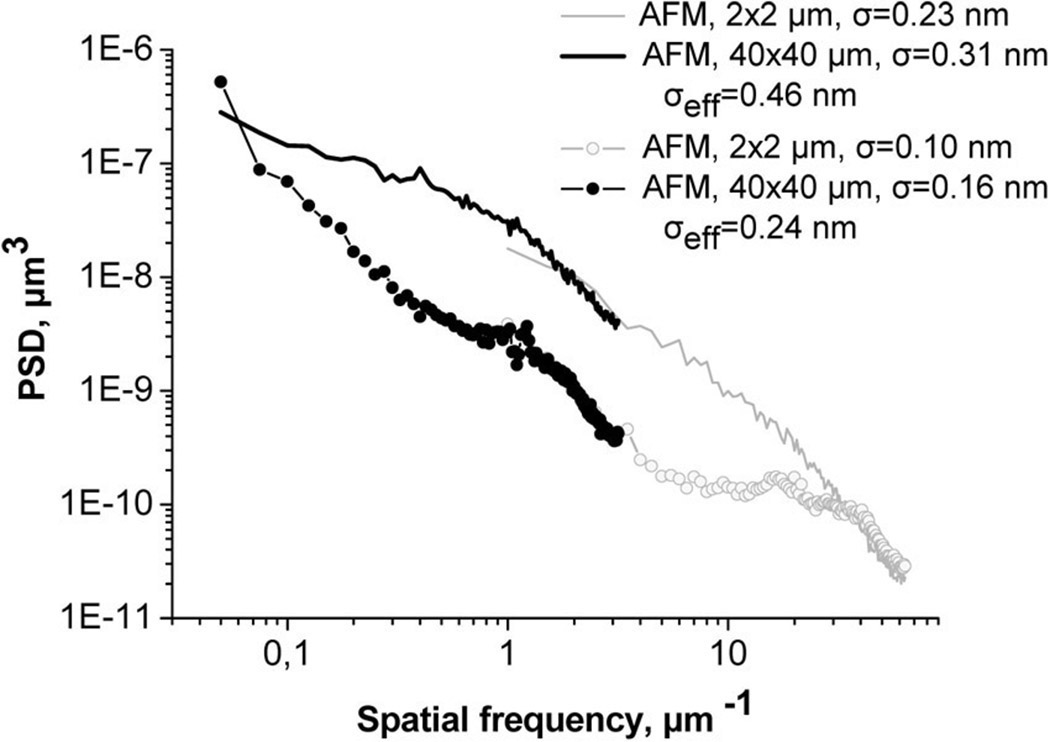 Figure 3. PSD functions for a fused silica substrate. These AFM measurements were made after pitch polishing with a grain size of less than 1μm (upper curves) and chemical-mechanical polishing (lower curves).

We have tested several polishing techniques on different substrates to produce very small effective surface roughness values. We have also conducted XRDS and AFM measurements that confirm surface roughness down to about 0.25nm can be achieved. These techniques and materials can be used to manufacture precise super-polished mirrors for high-resolution EUV solar astronomy telescopes. We now plan to work on improving the precision of the substrate shapes with the use of ion-polishing under interferometer shape control.

Sergey Shestov is a co-principal investigator for the Kortes experiment (for EUV and x-ray observations of the solar corona) that is due to operate on the International Space Station in 2017. His research interests include investigations of the solar corona, atomic spectroscopy, EUV optics, as well as development of EUV, x-ray, and visible light instrumentation for space-borne experiments.

Sergey Kuzin is head of the Laboratory for X-ray Astronomy of the Sun. He is the principal investigator for the TESIS instrument on the CORONAS-Photon satellite, the ARCA/MKA-FKI project, and a set of optical, EUV, and x-ray instruments on the Interhelio-Probe mission. His research interests include investigations of the solar corona, EUV, x-ray optics, as well as development of EUV, x-ray, and visible light instrumentation for space-borne experiments.

Nikolai Chkhalo is head of the Laboratory for Diagnostics of Multilayer Structures and Advanced Instrumentation. His research interests include x-ray optics, physics of surfaces and thin films, optical interferometry, EUV and x-ray sources, and EUV lithography.