The need to reduce electricity consumption and carbon dioxide emissions has propelled research into efficient light generation. Traditional lighting sources convert electricity only inefficiently into light, but solid-state lighting (SSL) has proven more successful. Indeed, the development of solid-state electroluminescent materials was recently recognized by the award of the 2014 Nobel Prize in physics.

SSL devices can be made of inorganic and/or organic materials. Organic LEDs (OLEDs) are made of multilayered submicrometric stacks where each layer has a different function, such as charge transport or electroluminescence. The ‘active layer’ produces light by electroluminescence and consists of electroluminescent polymers or small molecules that can be fine tuned to achieve better efficiencies and colors. White-light devices have reached efficiency of 100lm/W, far better than the 17lm/W of the traditional light bulb. However, the organic matter, and especially the materials employed for the cathodes, are sensitive to moisture and oxygen. Therefore, the devices need high-performance encapsulation and must be processed under inert conditions.

In this context, hybrid LEDs (HyLEDs) combine robust transition metal oxides with the organic active layer in devices that can be processed under air and do not require encapsulation. The diodes work with an inverted injection scheme that permits the application of inert metals as counterelectrodes.1 The structure is formed by a semiconducting transparent electrode, typically ITO (indium-doped tin oxide), an electron transport layer (ETL) made of transition metal oxides, the organic active layer, an inorganic hole transport layer, and the metallic electrode: see Figure 1(a).

HyLEDs' performance and stability qualify them as potential alternatives to pure polymeric-based luminaires. However, for commercialization, further conditions must be met. For example, the ease and relatively low cost of solution processing under air make it preferable to techniques under vacuum. However, high-throughput coating techniques, such as roll to roll, require flexible substrates,2 which are usually made of polymers—poly(ethylene terephthalate) (PET) is the most popular—and coated by transparent semiconductors such as ITO.

For flexible substrates made of PET, we need to consider the processing temperature. PET melts above 250°C. Given that the metal oxides used as the electron transport layer crystallize above 400°C, there is a clear need to work at low temperatures. In recent work, we showed that deposition and curing at temperatures below 250°C offer competitive results.3 Alternatively, the use of preformed nanoparticles permits deposition and annealing at temperatures lower than 150°C, giving excellent results when appropriate materials are employed.4

Regarding the optical properties of the substrates, PET and glass have similar refractive indexes (1.57 and 1.52, respectively), although glass is more transparent at wavelengths shorter than 400nm. There is no significant difference in color emission in the green region of the electromagnetic spectrum. However, design of diodes emitting in the blue or deep blue should take relative transparency into account.

Another factor to consider is that devices prepared on flexible substrates show poorer performance than diodes on rigid supports. This is normally ascribed to differences in the ITO layer due to the increased resistance of the semiconducting electrode on flexible substrates. To guarantee crack-free flexible inorganic films, the layers must be thin. They are therefore more resistant than the thicker films deposited onto rigid substrates (i.e., the thickness and resistance of commercial ITO are 150μm and 60Ω/sq on PET but 300μm and 4Ω/sq on glass, respectively). The increased resistance of the substrate is thus reflected in the performance of the device. Characterizing the carrier dynamics by transient electroluminescence reveals that the charge mobility is up to one order of magnitude lower in devices prepared on plastic substrates—see Figure 1(b)—which accounts for their poorer performance.5 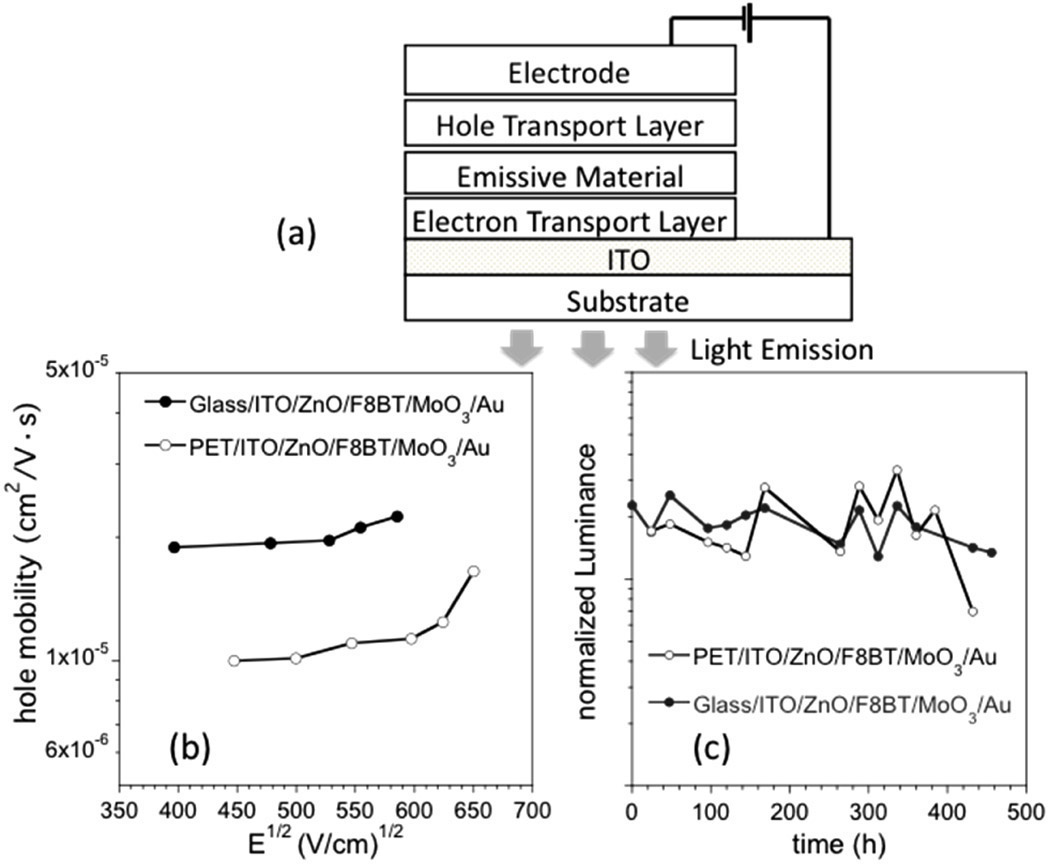 Figure 1. (a) Schematic illustration of a hybrid LED (HyLED). (b) Charge mobilities for the indium tin oxide/zinc oxide/poly(9,9-dioctylfluorene–alt–benzothiadiazole)/molybdenum oxide/gold (ITO/ZnO/F8BT/MoO3/Au) devices prepared on glass and poly(ethylene terephthalate) (PET). (c) Normalized luminance vs. operational hours under air for devices prepared on glass and PET without encapsulation.

Finally, we need to consider degradation of the diode under operational conditions in air. Glass is one of the best insulating materials showing low values for water permeability (10−9g/day/m2) compared to PET (21g/day/m2). This huge difference has direct implications in the performance of the device, forcing the use of robust encapsulation layers on OLEDs. However, HyLEDs are air stable, and experiments done in our lab show that devices prepared on glass and PET exhibit remarkable stability with similar lifetimes under operational conditions: see Figure 1(c).

In summary, we have shown that HyLEDs are air stable and offer high performance. As a result, they have the potential to enter the market, but the requirements of flexible substrates must be taken into account. We are now addressing these issues by considering the properties of the plastic substrate.

This work received financial support from the Spanish Ministry of Economy and Competitiveness (MINECO) by Ramón y Cajal fellowship RYC-2010-06787 and project MAT2012-31570.

Eugenia Martinez-Ferrero is a senior scientist. She obtained a PhD at Valencia University (Spain) followed by postdoctoral research at Pierre and Marie Curie University (UPMC, France) and the Institute of Chemical Research of Catalonia (ICIQ, Spain). Her research focuses on HyLEDs and solar cells through the optimization of their structure and the study of transition metal oxides that act as charge transport layers.