Investigating signal processing in neurons that connect the retina to the visual cortex enhances our understanding of how neurons function within a network.
07 January 2015
Sigita Augustinaite

Everything we feel, think, and do depends on the activity of neuronal networks in our brain, the basic functional unit of which is the neuron. These receive input from other neurons through branch-like dendrites, integrate the incoming signal in the cell body, and generate a response in the form of action potentials (nerve impulses), which travel through an axon (nerve fiber) to other neurons.

In the visual system, a signal is triggered when light activates photoreceptors (light-sensitive cells in the retina). Other retinal neurons process that signal and send it to higher centers of the brain as action potentials along the axons of retinal ganglion cells. Among the main targets of these axons are thalamocortical (TC) neurons in the visual part of the thalamus, called the dorsal lateral geniculate nucleus. Then, TC neurons send the visual information along their axons to the primary visual cortex.

However, TC neurons are not just simple connectors between retina and cortex. In addition to driving input from the retina, they receive modulatory inputs from other thalamic neurons and from other areas of the brain. These inputs, combined with intrinsic membrane properties such as T-type calcium conductance (calcium ion flow into the cell through voltage-gated T-type calcium channels), cause TC neurons to operate in distinct functional modes that are dependent on states of wakefulness or sleep.1, 2 During sleep, when the membrane of the neuron is hyperpolarized, T-type calcium channels can be activated. This activation leads to an intrinsic rhythmic burst firing (a group of high-frequency action potentials) that blocks the retinal signal transmission to the cortex (burst firing mode). Because of special kinetic properties, T-type calcium channels cannot be activated during depolarization. Therefore, during wakefulness, when the membrane of the neuron is depolarized, intrinsic rhythm generation is inactivated, and TC neurons can faithfully transmit the incoming retinal signals to the cortex (tonic firing mode).

The primary visual cortex, which receives input from TC neurons, is an area that provides massive modulatory feedback to TC neurons, thus controlling the retinal signal transmission. In the context of this retina-cortex system, TC neurons receive and process two different signals: driving input (a signal that carries basic stimulus information) and modulatory input (one that regulates or gates that transfer). Interestingly, retinal and cortical inputs are separated spatially: retinal inputs are located on the proximal dendrites close to the cell body, while cortical inputs end on distal dendrites.3 This alone already indicates the different effects the inputs can have on each other and on the output generation.4 Understanding such dendritic processing in TC neurons would help clarify the cortical feedback control mechanisms, and furthermore could also shed light on the fundamental problems of how neurons function within the network, how different signals are integrated, and how a response is generated.

In our recent work,5 we studied dendritic signal processing in TC neurons with combined imaging and whole cell recording in vitro, as shown in Figure 1(A) and (B). We used two-photon microscopy to visualize the neuron and select sites for dendritic stimulation, which we achieved by local application of glutamate to simulate activation of cortical feedback. We then measured membrane voltage as neuronal response. We found that the relatively long-lasting depolarizing potentials (positive change in the cell's membrane potential), known as N-methyl-D-aspartic acid (NMDA) spike/plateau potentials,6–8 can be generated by local stimulation of distal dendrites of TC neurons, as shown in Figure 1(C). As with any depolarization, if strong enough, these potentials can cause a neuron to fire action potentials, that is, to send out a signal. However, if this occurs, cortical feedback-induced action potentials would mix with those of retinal ganglion cells. This would destroy the temporal structure of the visual signal traveling through TC neurons to the cortex. We showed that NMDA spike/plateaus themselves do not cause the generation of action potentials. Instead, they provide depolarization, which changes neuronal properties, and so provide conditions for reliable transmission of retinal signal to cortex. As shown in Figure 2, NMDA spike/plateau potentials can switch the functional mode from burst to tonic by inactivation of special, burst-firing mediating T-type calcium channels, while in tonic mode they facilitate the transfer of the retinal signal by lifting the membrane potential closer to the threshold for action potentials (see Figure 3). 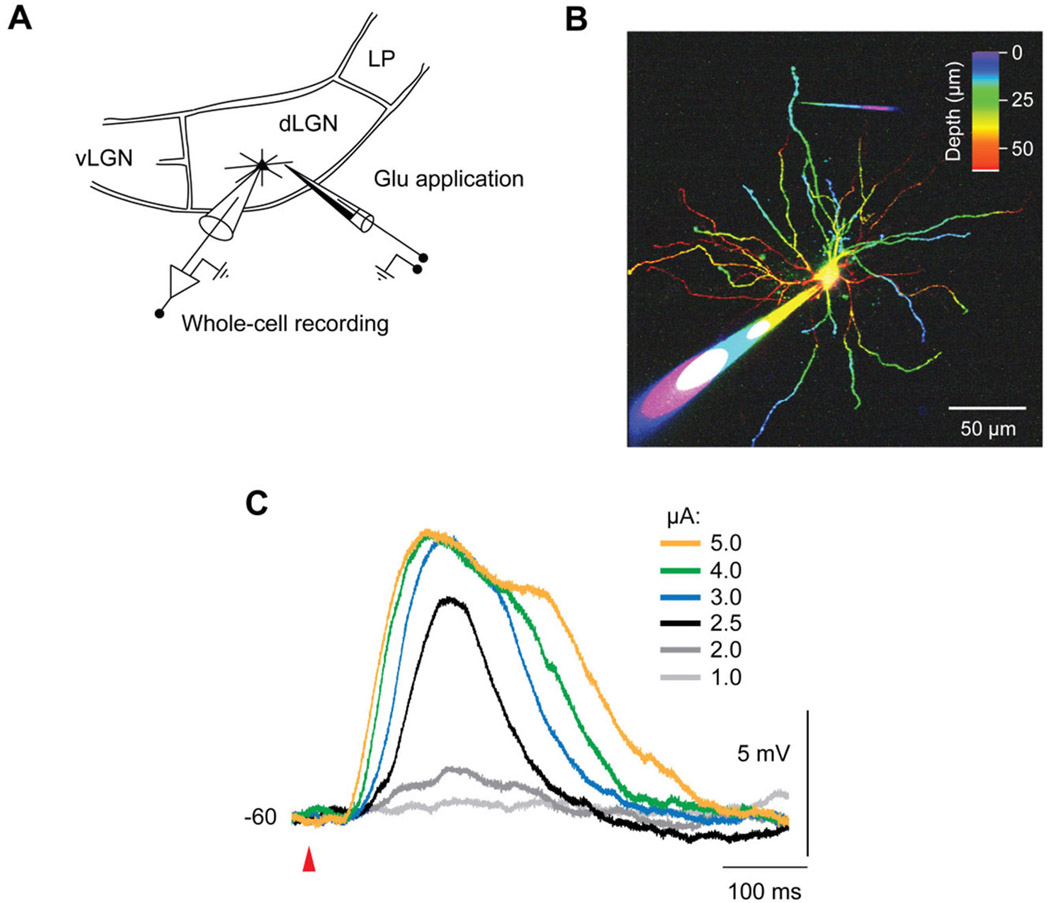 Figure 1. (A) Simultaneous two-photon imaging and somatic whole-cell recording in vitro from thalamocortical (TC) neurons in the dorsal lateral geniculate nucleus (dLGN), the visual part of the thalamus. We elicited dendritic responses by local application of glutamate (glu). (B) Image of a recorded neuron. We filled the neuron with the fluorescent dye Alexa Fluor 594 and applied glutamate at the dendritic site indicated by an asterisk. The color code indicates the depth in the slice. (C) Somatically recorded potentials elicited by the local glutamate stimulation. The stimulation current strength, indicated by the color code, reflects the amount of released glutamate. We elicited a N-methyl-D-aspartic acid (NMDA) spike with 2.5μA stimulation. Further increase in stimulation strength resulted in increased duration of the plateau. The start of the glutamate application is indicated by the red arrow-head below the traces. vLGN: Ventral lateral geniculate nucleus. LP: Lateral posterior nucleus. 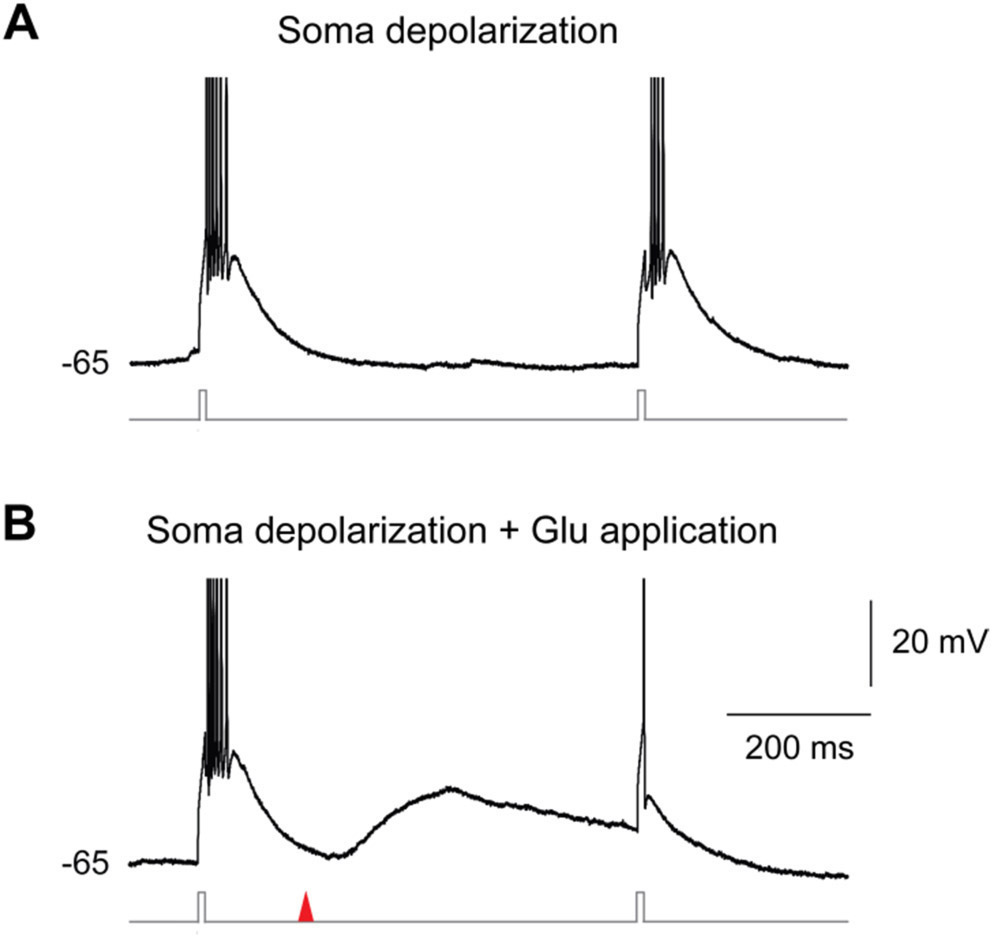 Figure 2. A spike/plateau potential elicited at a single distal dendrite can inactivate T-type calcium (Ca2+) conductance in TC neurons and thereby switch the firing mode from bursting to tonic. (A) We elicited T-type Ca2+ bursts by two depolarizing pulses to the soma of the TC neuron. The timing of the pulses is indicated by the current trace (gray) below the trace of the response. (B) Responses elicited by combined somatic depolarizing pulses and dendritic glutamate stimulation. The NMDA spike/plateau prevented T-type calcium burst in response to the second somatic pulse. The glutamate stimulation started 150ms (red arrowhead) after the first depolarizing pulse. 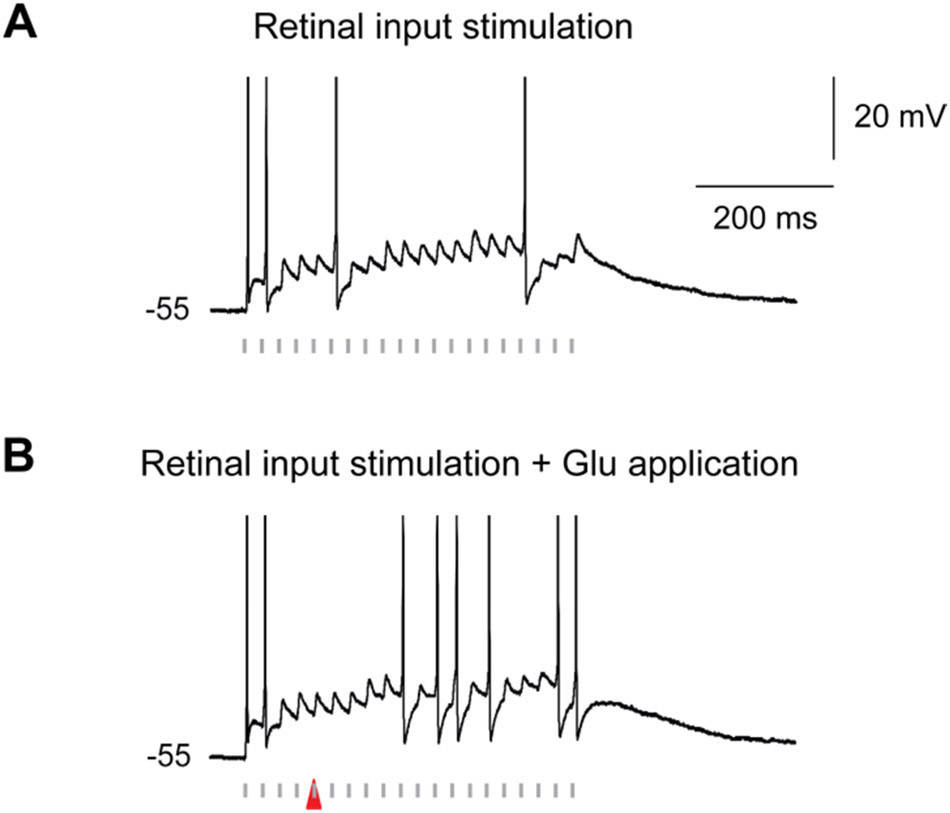 Figure 3. NMDA spike/plateau potentials facilitate the retino-geniculate signal transmission. (A) Responses of the TC neuron to the electrical pulse train stimulation of retinal input. The timing of each pulse is indicated by a gray marker below the trace. (B) Responses to the combined retinal input and dendritic glutamate stimulation. Due to the long-lasting NMDA spike/plateaus, more action potentials were elicited by the excitatory postsynaptic potential generated through the retinal input. Note that the electrical train stimulation started 100ms before the glutamate application (red arrowhead).

We suggest that NMDA spike/plateau potentials can function as a powerful mechanism for cortical feedback to modulate the retino-cortical transmission. In principle, this mechanism could also operate in other neuronal circuits, where modulatory inputs could use NMDA spikes to regulate the transmission of the driving input. However, the most interesting question is whether neurons would exploit such dendritic signal transfer regulation mechanisms in a fully functioning brain. We will continue to investigate TC interactions in behaving animals and plan to address this issue through future experiments.

Sigita Augustinaite earned a PhD in biophysics at Vilnius University, Lithuania. She continued her research in neuroscience as a postdoctoral scholar at the University of Oslo, Norway, and is now working at OIST.