Exciton-polaritons are quasi-particles that form as an interaction of light and matter in the strong coupling regime (a state in which energy is coherently exchanged between an emitter and a resonant cavity field).1 These particles have a small effective mass, and can undergo condensation even at room temperature in large bandgap semiconductors2 or organic films.3 By contrast, such a transition in atoms requires temperatures of some μK. It is possible to use polariton condensates as a laser-like light source (a polariton laser) that consumes relatively small quantities of power. Furthermore, their bosonic nature makes them suitable for applications in quantum simulators or logic devices.

Unlike conventional lasers, polariton lasers do not rely on stimulated emission of cavity photons. Instead, during a dynamic phase transition, a macroscopic number of exciton-polaritons populate a common ground (lowest energy) state. Consequently, photons leak out and these adopt the monochromatic and coherent nature of the condensed polaritons, making the emission laser-like. These bosonic polariton lasers have less stringent conditions in terms of minimum threshold current, and therefore can outperform standard lasers. Until recently, it had only been possible to observe the effects of polariton condensation and lasing in various optically pumped systems.4–6 Here we describe this type of laser operation under electrical pumping, a crucial step toward its wider application.7–9

Our polariton laser diode consists of a high quality factor (Q-factor 6300) gallium arsenide/aluminum arsenide (GaAs/AlAs) distributed Bragg reflector sample, with four integrated indium gallium arsenide (InGaAs) quantum wells in an intrinsic GaAs λ-cavity with doped mirrors. The Rabi splitting of the sample (the minimum energy difference between the new light-matter-coupled upper and lower polariton) is 5.5meV. To facilitate electrical injection, we fabricated micropillars with diameters of 20μm that have a titanium-gold ring contact at the top and a planar n-type contact at the bottom, as shown schematically in Figure figure 1(a). 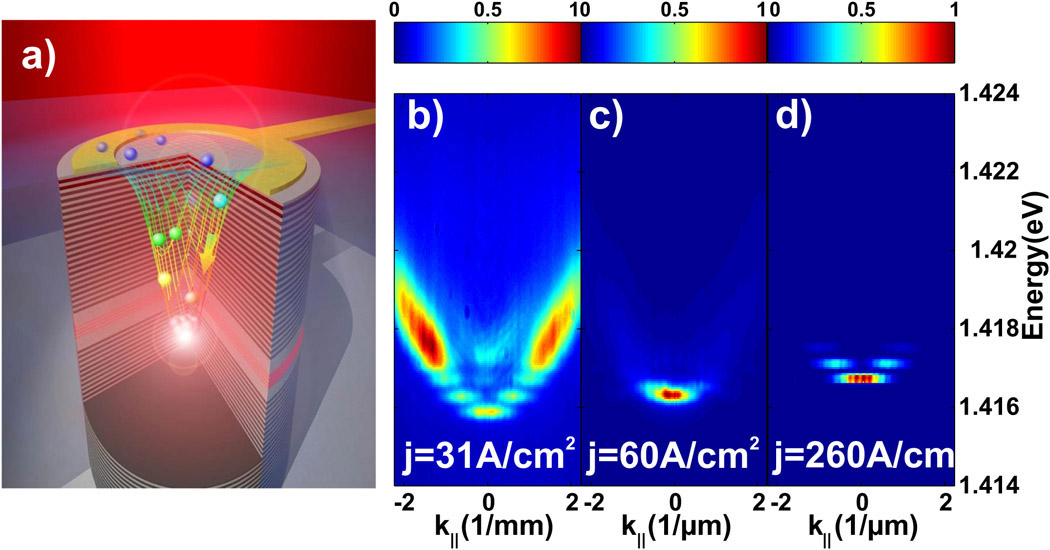 To reduce detrimental temperature-related effects—such as phonon-induced dephasing or bleaching of the polaritons by thermal dissociation of excitons—we studied the electroluminescence from the pillars at a temperature of 8K during direct current operation. We carried out all experiments in a Fourier-space micro-photoluminescence setup,10 applying a magnetic field of 5T along the growth axis of the sample to further enhance the effects of light-matter coupling.11 Figure figure 1(b–d) shows a series of dispersion images recorded from a device with a cavity-exciton detuning Δ=EC0−EX0=(−6.4±0.3)meV (the energy difference of the uncoupled exciton and photon mode). In the low pumping regime, shown in Figure figure 1(b), the electroluminescence from the polaritons is dominated by a pronounced emission from the relaxation bottleneck at k∥±1.5μm−1. We can overcome this bottleneck by increasing the pump current to 60A/cm2, as in Figure figure 1(c), resulting in a macroscopically populated ground state. This marks the onset of stimulated scattering, which results in polariton lasing at k∥=0. When we increase the current, the emission approaches the energy of the uncoupled cavity mode—shown in Figure figure 1(d)—which indicates a transition to the weak coupling regime (incoherent interaction between emitter and cavity field).12

Figure 2 shows a quantitative analysis of the device's behavior, where we plot the intensity emitted from the polariton ground state (black, left axis) against the pump current for a magnetic field of 4T. In this representation, two pronounced non-linearities dominate the input-output characteristics, marking the two thresholds for polariton lasing as well as for conventional vertical-cavity surface-emitting laser operation in the weak coupling regime. Furthermore, we plotted the linewidth (blue, right axis). An increase prior to the first threshold, caused by polariton-polariton interactions, is followed by a sharp drop at the threshold. This indicates the onset of temporal coherence inside the polariton condensate. 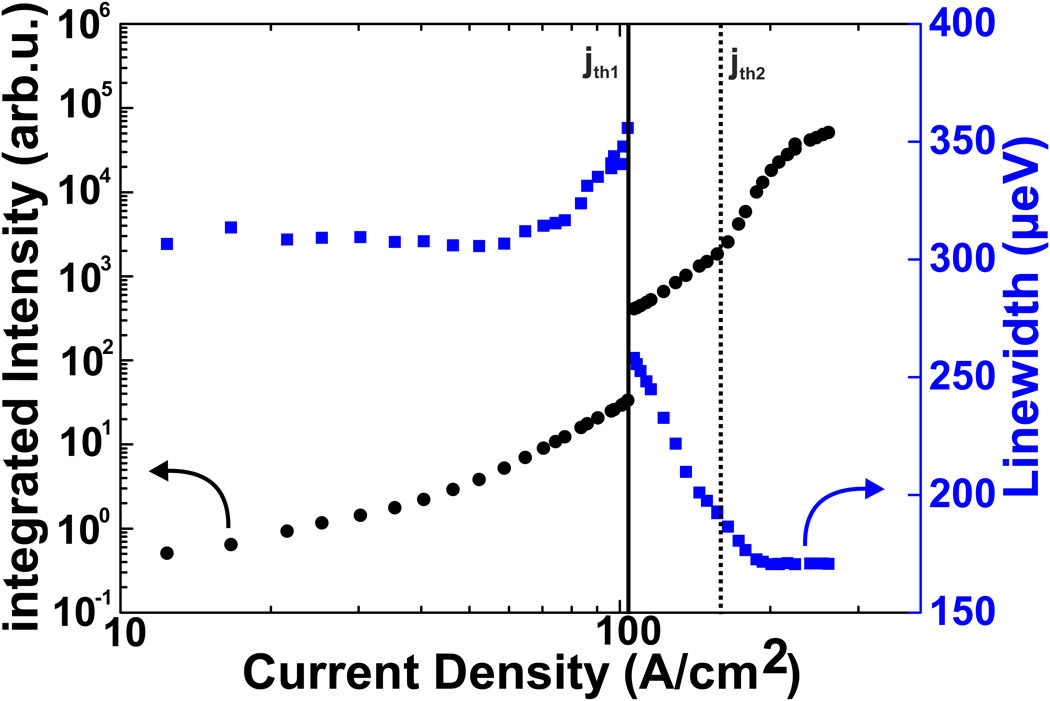 We studied the emission from the device in the magnetic field of 5T by polarization-resolved spectroscopy, where the energetic difference between the σ+ and σ− polarized light yields Zeeman splitting (dividing of spectral lines). We plotted a waterfall representation of the extracted polarization-resolved spectra at k∥=0±0.1μm−1 for several excitation currents, as shown in Figure figure 3. From this we were able to observe the monotonous blueshift of the emission mode (where the value remains constant or increases) up to the second threshold, as well as a distinct splitting between the σ+ and σ− polarized light. This division can be resolved until the second threshold, supporting the interpretation that the strong light-matter coupling persists between thresholds. 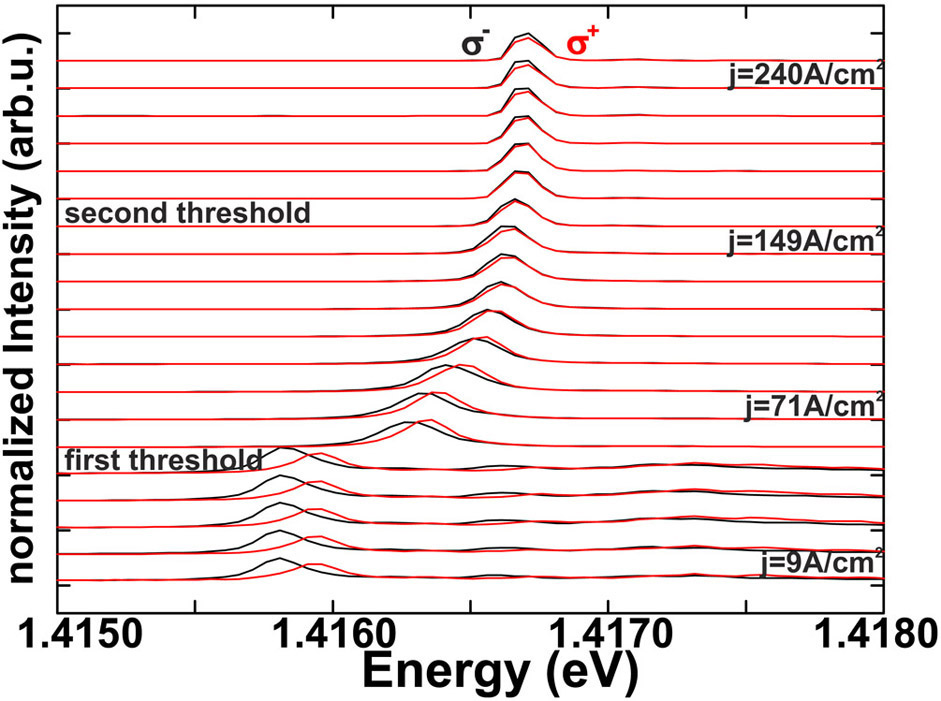 Figure 3. Waterfall representation of polarization-resolved spectra (normalized to unity, 5T) over the full range of excitation powers, showing a persistence of the mode splitting until the second threshold is crossed. Red and black solid lines represent the σ+and σ - polarized light, respectively.

In conclusion, we have observed clear evidence for polariton laser emission in an electrically driven quantum well microcavity device. The system demonstrates two pronounced laser transitions, the first occurring in the strong coupling regime, and we can observe this directly by characteristic Zeeman splitting. Electrical excitation is a significant step toward application of polaritonics, specifically as low-power coherent light sources. Our future work will investigate the realization of compact, integrated electro-polaritonic experiments, such as the realization of tunable circuits, logic switching devices,13 or quantum simulators.14

The authors would like to thank A. Wolf and M. Emmerling for technical assistance, and the State of Bavaria for financial support.