Sugar or spice? Determining the makeup of exoplanets

A mission proposed to the European Space Agency would measure the molecular content and temperature of exoplanet atmospheres to provide the first comprehensive picture of their chemistry.

Since the 1990s, we have discovered hundreds of planets orbiting stars other than our own. These exoplanets come in all varieties, from huge ‘ gas giants’ many times larger than Jupiter, to rocky planets roughly the size of Earth or smaller. They exhibit an equal variety of orbital behaviors, many of which seem exotic to us, ranging from periods of a few hours—with the planet virtually grazing the surface of the host star—to highly eccentric orbits more akin to comets in our own Solar System. Through observation we have learned much about the planets' basic parameters: size, mass, orbit, density, and some idea of surface temperature. However, we know little or nothing about the chemical and physical conditions in their atmospheres, or even whether an atmosphere is present. Without detailed measurements of these features we cannot understand how the planetary systems formed and evolved, or why our Solar System looks so different from those elsewhere in the Universe.

Spectroscopy is an important tool to achieve these measurements. Molecules and atoms absorb light in discrete color bands, and when we look at a source of light, such as a star, through a gas (the atmosphere of a planet) we see dark bands at given parts—colors or wavelengths—of the spectrum. By measuring where these bands are (by which wavelength or color is dark), we can tell which molecules, and therefore which chemicals, are present in the atmosphere. This tells us an enormous amount about the conditions on the planet, such as whether there is water, what chemistry is taking place, and the temperature of the atmosphere.

Measuring the spectrum of a planet in close orbit with its host star is extremely difficult. Only one photon in 10,000 typically arises from the planet compared to the star, and disentangling the two is not possible by direct imaging using currently available telescopes. One method shown to be successful is transit spectroscopy.1 When the planet passes in front of the star in orbit, we see the star's light filtered through the planet's atmosphere, giving the transmitted spectrum of the planet. When it passes behind, we see the star without the planet and can subtract the stellar spectrum from the planetary one to determine the planet's emitted spectrum. This approach gives complementary data, and both transmission and emission spectra reveal the molecular makeup of the planet's atmosphere.

To undertake transit spectroscopy successfully, we need extremely stable conditions. This means using space-based platforms and observing in the IR (1-20μm wavelength) where the contrast between the star and planet is highest. Attempts to use transit spectroscopy on a few targets2–5 have relied on missions not explicitly designed for the task, such as the NASA Spitzer and Hubble space observatories. These observations give hints of the presence of molecular features. However, the instruments and spacecraft are not stable enough, and the data are dominated by fluctuations and instabilities.

To improve observational capabilities, we proposed that the European Space Agency (ESA) build a dedicated transit spectroscopy mission operating from the visible (0.5μm) to the mid-IR (16μm). ESA has considered this project—the Exoplanet Characterisation Observatory (EChO)—as a candidate for its third medium mission launch due in 2024.6, 7

Figure 1 shows the overall spacecraft configuration. The mission's main design goal is to have the instrument, telescope, and spacecraft working together as a single integrated system. The 1m-diameter mirror design is an off-axis Cassegrain type using silicon carbide, which is light and stiff. The instrument is designed as a single unit with several spectrometer modules sharing a focal plane, with chromatic division using dichroic filters. We installed a visible/near-IR fine guidance sensor in the same optical system with the sensor output linked into the spacecraft attitude control system. The telescope, spectrometer, and fine guidance sensor all share a common structure to minimize any thermally induced distortion. The telescope and instrument need to be passively cooled to < 55K using a combination of V-groove shields and dedicated radiators. The instrument detectors are based on mercury cadmium telluride technology and must be passively cooled to 45K (1–5μm) or, using a Stirling cycle cooler, to 30K (5–16μm) to keep the dark currents at an acceptable level. A detailed study of the simulated performance of EChO showed that it would be capable of measuring the spectra of a wide variety of planets, from hot super-Jupiters to warm super-Earths, giving us the first comprehensive view of the chemistry of these mysterious other worlds. 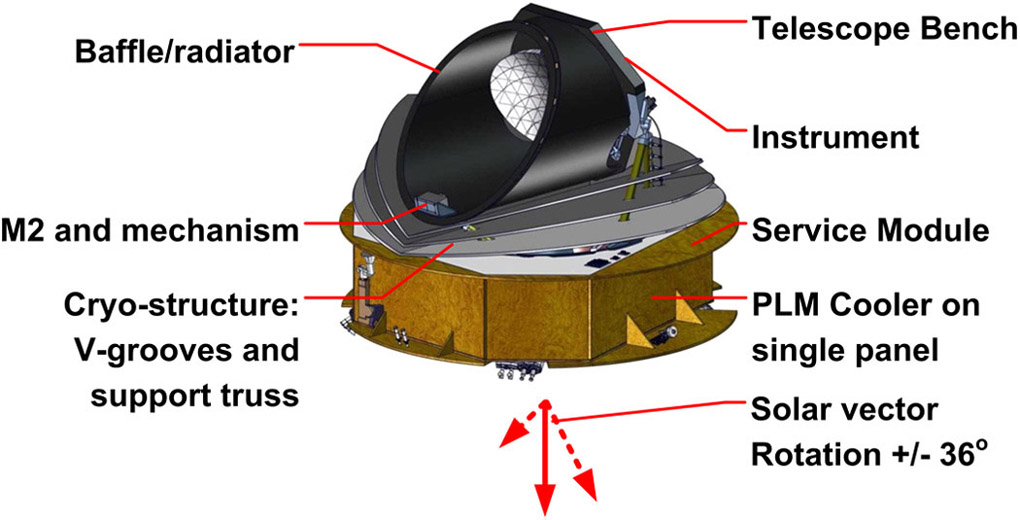 Exoplanet science now needs to move from discovery to understanding, or characterization. To do this we need to determine the contents and conditions of a large number of exoplanet atmospheres through spectroscopy, and this can only be achieved using a dedicated space mission, such as EChO. We have demonstrated our system through simulation, and presented it to ESA in December 2013. However, it was not adopted as a mission at that stage. We anticipate that it will not be long before a mission such as EChO is built, and achieving this will be our next objective.

Bruce Swinyard is professor of astronomical instrumentation in the Department of Physics and Astronomy. He has worked on the design and implementation of many space instruments in his 28-year career, including the LWS on the Infrared Space Observatory and SPIRE on the Herschel Space Observatory.