Current best practice for management of brain tumors generally includes surgical removal followed by chemotherapy and radiotherapy. It is of paramount importance to remove as much of the tumor as possible while leaving healthy tissue untouched,1 but simple visual inspection is generally limited in its ability to distinguish between the tumor and surrounding healthy tissue. Although imaging techniques such as pre-operative MRI (see Figure 1) are helpful for identifying the location of the tumor in advance of surgery, movement of brain tissue during an operation limits their ability to completely guide surgery. 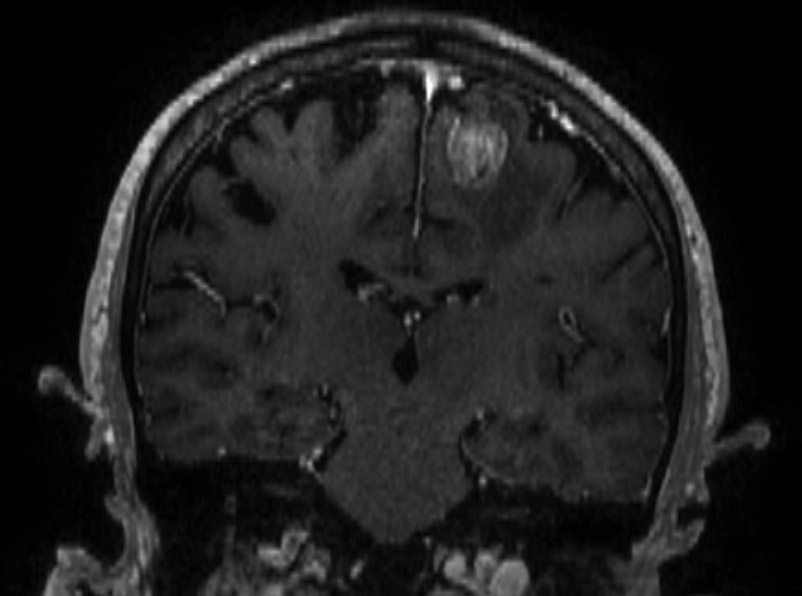 Figure 1. High-grade glioma. Preoperative contrast-enhanced axial image of a high-grade glioma (the most common primary brain tumor) demonstrating the tumor bulk and the infiltrating margins of tumor. Pre-operative images are used intraoperatively to help guide the surgeon, but intraoperative brain movements limit the accuracy of these images and, as such, their ability to completely help guide surgery. 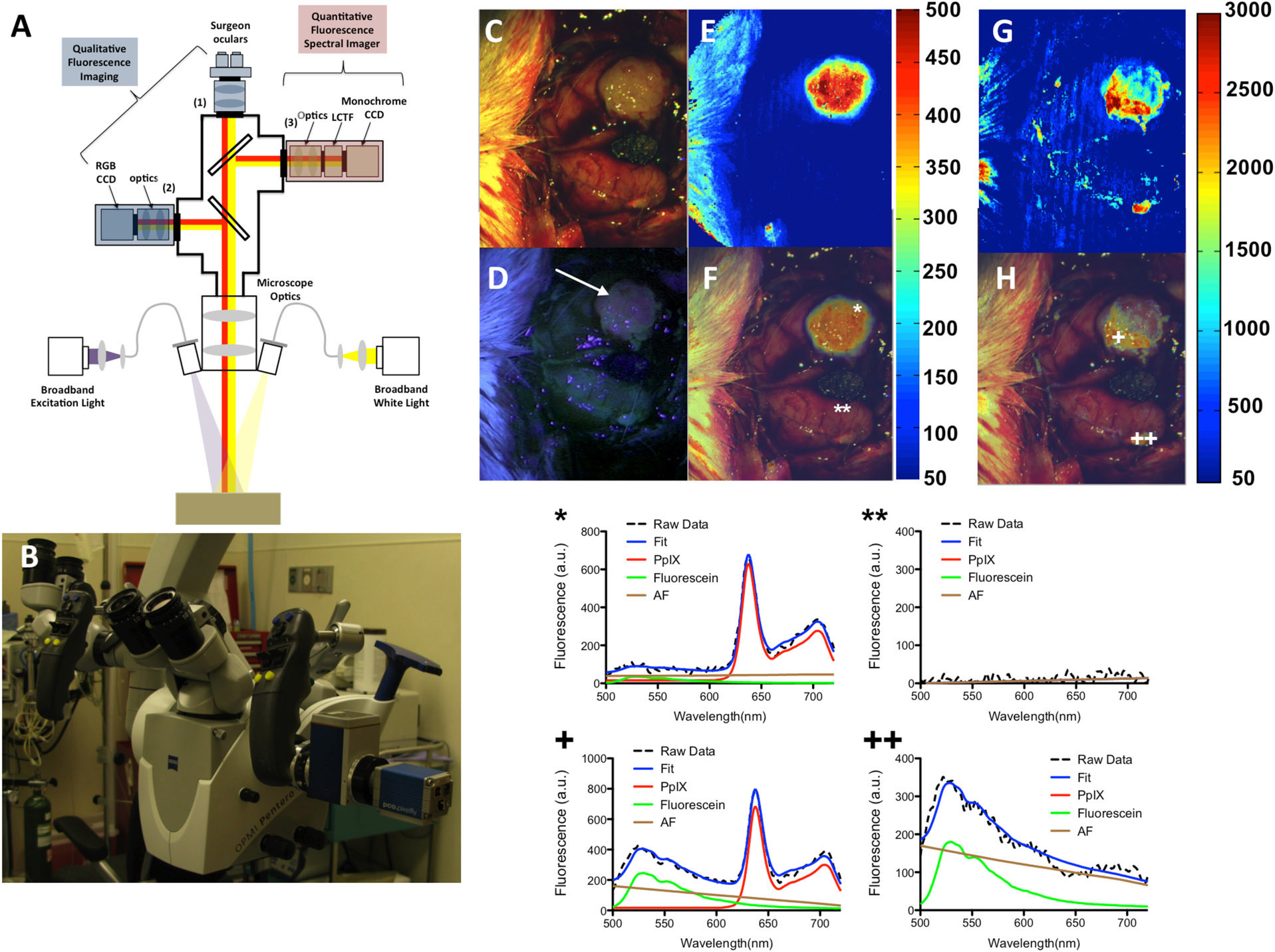 Fluorescence-guided surgery (FGS) is a promising technology,2 but FGS technologies currently used in clinical practice have limited sensitivity. In addition, attenuating effects of intrinsic tissue properties make these technologies subjective in assessing how much fluorescent tumor biomarker is present. We have focused on developing quantitative fluorescence methods that correct for these attenuating effects.

Specifically, we have recently developed an intraoperative system for quantitative fluorescence and hyperspectral imaging that integrates into the neurosurgical workflow. It attaches to the operating microscope, collects both reflected white light and fluorescence emissions across the visible spectrum of light, and uses this information to reconstruct quantitative fluorescence images of the full surgical field of view. It provides images of the concentration of the commonly used fluorescent tumor biomarker protoporphyrin IX (PpIX) at each pixel in the case of oral administration of 5-aminolevulinic acid (ALA) prior to surgery.3

Existing state-of-the-art operating microscopes allow the surgeon to ‘click’ a button to change the microscope illumination from a broadband white light source to filtered light at the excitation wavelength of the fluorophore of interest, such as violet (405nm) light for PpIX. A longpass filter selects longer-wavelength light (for example, >450nm for the Zeiss Pentero operating microscope). This option achieves single-band detection of fluorescence through both a color CCD camera and the naked eye of the observer. The neurosurgeon can then observe fluorescence through the microscope oculars or on an LCD screen, and assess the field as having high, low, or no visible red fluorescence.

These systems have been used effectively in neurosurgery to date, but they do not account for the effects of tissue optical properties, which are influenced by the spatial variations in blood flow, cell density, tissue biology (such as tumor, normal white matter versus gray matter, and necrosis, among other parameters). The optical properties of tissue affect the amount of fluorescence excitation and emission light that is attenuated.4 Under these conditions, fluorescence measurements and assessments are subjective and do not represent an accurate measure of the tumor biomarker in the tissue of interest.

We previously showed, using data collected with a point probe fluorescence measurement system, that absolute levels of PpIX in tissue improved tumor detection.5 We used our point probe system to maximally exploit the diagnostic potential of PpIX as a tumor biomarker for FGS compared to ‘visible’ assessments of fluorescence.5 Given these promising results, we have developed and tested an imaging system3 that would provide quantitative estimates of fluorescence in a wide-field mode. This new system collects hyperspectral data across the full surgical field of view under both white light and fluorescence excitation illumination. An attenuation correction algorithm adjusts the recorded fluorescence emissions to account for the attenuating effects of tissue optical properties, and an unmixing process separates contributions from autofluorescence and PpIX from the corrected fluorescence spectrum on a pixel-by-pixel basis, thereby estimating the absolute level of PpIX at each pixel location in the surgical field of view. The system integrates seamlessly with modern neurosurgical microscopes by attaching through a free optical port, and otherwise does not interfere with the surgical workflow.

We have validated the accuracy of this system in tissue-simulating ‘phantoms,’ demonstrating >90% accuracy in estimating PpIX concentrations as low as 20ng/ml (approximately the biological values that distinguish normal brain tissue from tumors). Subsequent in vivo evaluations in rodent models of glioma (the most common primary brain tumor) demonstrated that our system detected PpIX at nanograms per milliliter levels, and within the infiltrating margins of tumors with greater sensitivity than state-of-the-art clinical technologies. We have moved this system from pre-clinical studies into the operating room in more than a dozen cases of gliomas, and have demonstrated its practical feasibility. Furthermore, we have also shown the ability to detect residual tumor that would have otherwise gone undetected with state-of-the-art clinical FGS technologies.3

An important goal of the scientific enterprise is to develop techniques that provide quantitative, objective assessments of biological processes. Current FGS approaches are subjective at best and do not meet criteria for quantitatively assessing tumor biomarkers. Importantly, subjective techniques do not exploit the full potential of tumor biomarkers, and increase the probability of leaving undetected residual tumor behind. Our goal has been to develop quantitative tools for FGS that provide the surgeon with objective measures of tumor biomarkers and fully exploit these markers. Here, we presented an overview of our recently developed quantitative fluorescence imaging technology as a novel aid for improved neurosurgical guidance during surgical removal of brain tumors. We are currently working on further enhancing this technology, including optimizing it for real-time, video-rate quantitative imaging. We are also expanding our correction algorithm to include model-based techniques for multiple biomarker quantification, including hemoglobin concentration, oxygenation, and scattering parameters. These advances will help us more accurately detect tumor tissue during neurosurgery.

Pablo A. Valdés holds an MD and PhD in biomedical engineering from Dartmouth Medical School and the Thayer School of Engineering, respectively. He is currently a neurosurgery resident working on optical imaging as a neurosurgeon physician-scientist.