Using multiplexing and an LED array to code illumination angles in a commercial microscope achieves fast capture times, resolution beyond the diffraction limit, and a very large field of view.

The LED array microscope is a powerful new tool that uses computational illumination to turn low-power microscopes into high-resolution imagers. The hardware involves a simple replacement of the light source with a programmable LED array1, 2 (see Figure 1). Since the LED array is at the Fourier plane of the sample, each LED corresponds to a unique illumination angle, allowing arbitrary patterning of angles. Conveniently, the range of illumination angles can be much larger than that allowed by the microscope's numerical aperture (NA). Thus, by choosing which LEDs to illuminate, we can achieve brightfield and darkfield imaging modes1, 3 or phase contrast.3–5 Figure 1 shows a single frame of a 50Hz video in which we time-multiplex all three contrast modes for simultaneous capture.3 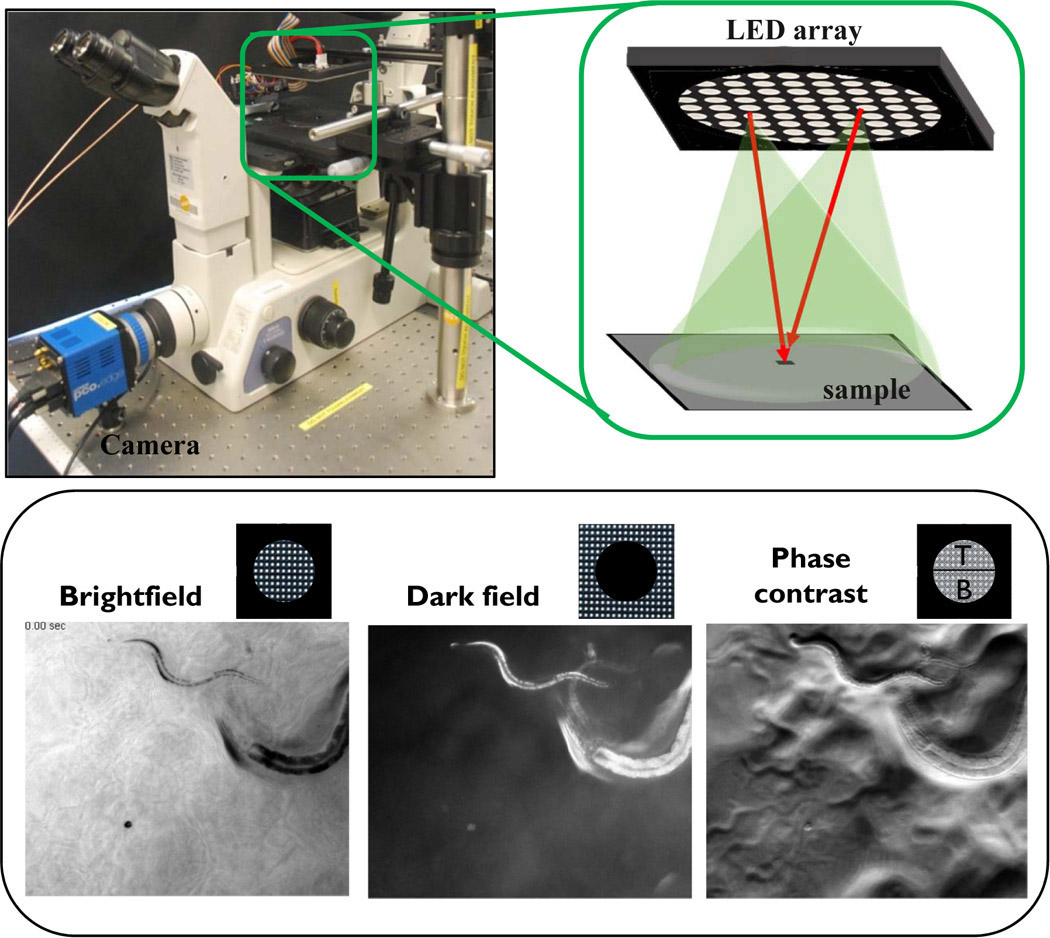 Figure 1. Computational illumination in a commercial microscope. An LED array replaces the illumination unit for flexible patterning of illumination angles at the sample. One use of this setup is shown below, demonstrating simultaneous brightfield, darkfield, and phase contrast imaging at 50Hz. T: Top. B: Bottom.

The LED array microscope can also be used for 3D intensity1 or phase contrast4 imaging. To achieve this, one must scan through each illumination angle in the 2D array while capturing an image for each. The resulting 4D data set can be thought of as a light field6 or phase-space measurement,7 and thus can be used for digital refocusing, aberration removal, or 3D recovery. Alternatively, this same 4D data set, when used with a thin sample, can provide synthetically enhanced resolution, since the darkfield images contain information about subresolution features in the sample.2, 8

The process of using the LED array microscope to achieve resolution beyond the diffraction limit of the objective NA is called Fourier ptychography. One can use a low NA objective, having a very large field of view (FoV), but still obtain high resolution across the entire image, resulting in gigapixel images. The aberrations in the imaging system can also be estimated and corrected.9 For thin samples, illuminating from different angles corresponds to a shift in Fourier space, such that different spatial frequencies pass through the pupil for each LED. The goal of the inverse algorithm is to stitch together the images from different areas of Fourier space to achieve a synthetic NA that is the sum of the objective NA and illumination NA. The caveat of using Fourier space stitching is that phase information is required, which must be inferred by an optimization process based on angular diversity, analogous to ptychography based on spatial translation.10–13 For such algorithms to converge, significant (>60%) overlap is required between the Fourier space areas of neighboring LEDs,2, 14 so they must be closely packed. The main limitations of Fourier ptychography are the large amount of data captured and the long acquisition times required for sequential scanning of each LED.

We recently showed that multiplexing is capable of reducing both acquisition time and the number of images required by orders of magnitude.8 We illuminate the sample from multiple angles simultaneously in each measurement, corresponding to multiple coherent modes. Turning on multiple LEDs increases the amount of power reaching the camera and decreases the required exposure time proportionately. To reduce acquisition time further, we can also reduce the number of total images captured, since each image contains information from multiple spatial frequency bands. Reducing the captured data too far will result in the reconstruction algorithm failing to converge (consider the limiting case of turning all LEDs on, in which case no phase information can be reconstructed). We have demonstrated up to eight LEDs multiplexed at once (see Figure 2). Being a nonlinear optimization procedure, convergence failures of the algorithm are difficult to predict theoretically, and we provide here only empirical evidence that this strategy can be used to reduce data acquisition significantly. 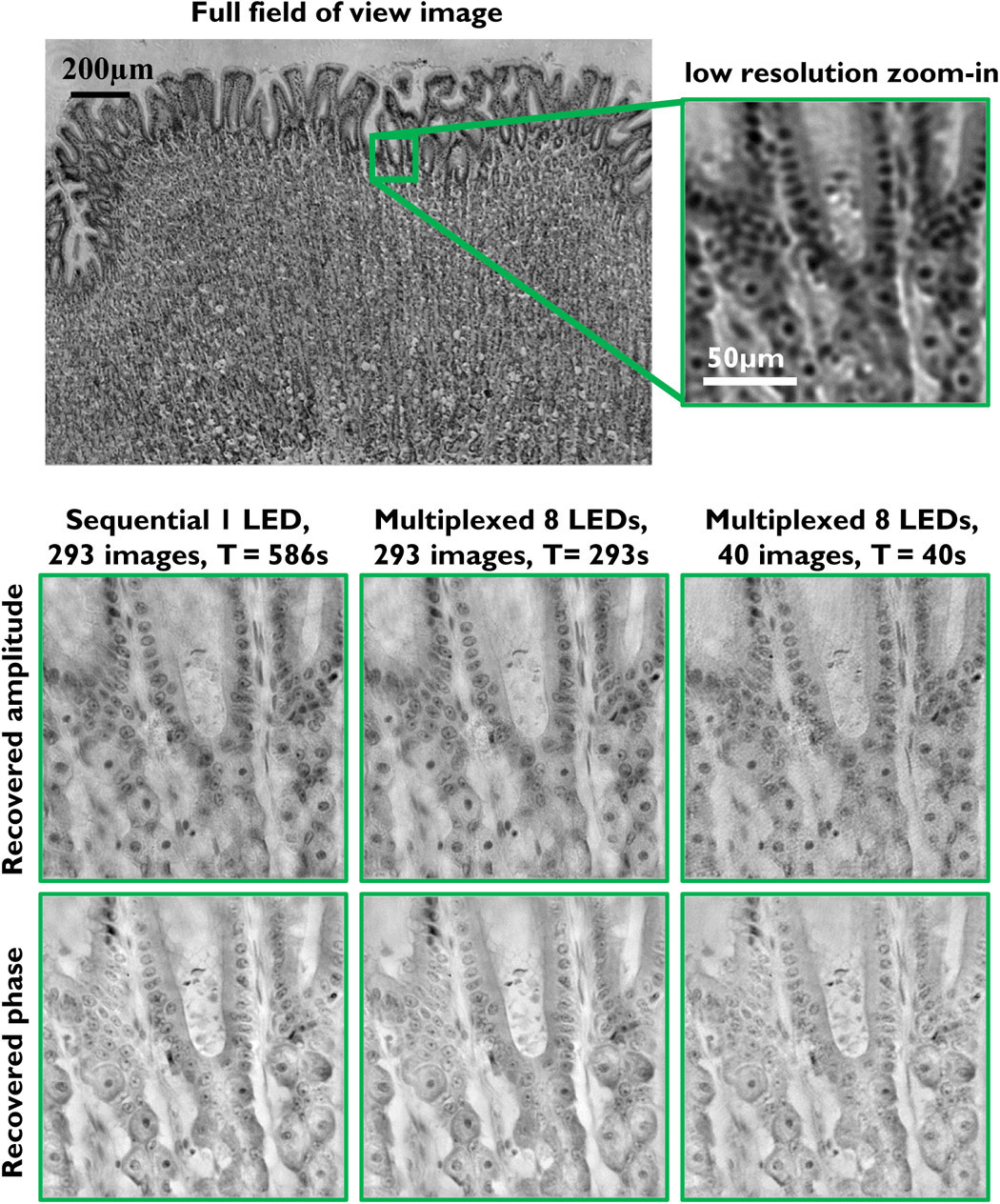 Figure 2. Experimental results for Fourier ptychography with multiplexed illumination. The full field-of-view image and a low-resolution zoom-in of one sample area (top). High-resolution reconstruction result (bottom) comparing single LED sequential scan with multiplexed capture under two different schemes. The first captures the same number of images as the sequential scan, but uses a shorter exposure time due to higher throughput from more LEDs being on. The second reduces both the exposure time and the number of images captured, since each image covers multiple areas of Fourier space via multiplexing. Multiplexed illumination significantly reduces capture times without sacrificing reconstruction quality. T: Time.

By speeding up the capture of data in Fourier ptychography with an LED array microscope, we are moving toward real-time gigapixel intensity and phase imaging. Future work will explore optimal coding strategies and improved hardware for sub-second data capture. This opens up new application areas in live cell imaging and dynamic microscopy.

Laura Waller is an assistant professor. She received BS, MEng, and PhD degrees in electrical engineering and computer sciences from the Massachusetts Institute of Technology in 2004, 2005, and 2010, respectively. She is a Moore Foundation data-driven investigator, Bakar Fellow, a National Science Foundation CAREER awardee, and Packard Fellow. She is a member of SPIE.