Recently, flat panel display technology has developed rapidly to produce displays that provide realistic 3D images by stimulating physiological cues of 3D perception in the human visual system. Such 3D displays are widely available, but, inconveniently, they require the viewer to wear special glasses. Consequently, much effort is being directed to developing autostereoscopic displays that do not require glasses.

However, existing autostereoscopic 3D technologies suffer from inferior image resolution. A rule of thumb is that the resolution of the 3D image is inversely proportional to the number of viewing positions. Since both the resolution and the number of viewing positions are important, we need to find a way around this trade-off. Others have previously proposed a time-sequential 3D display using a directional backlight unit (DBLU) and an LCD with a higher (120Hz) frame rate.1–3 In a time-sequential system, different subimages are shown one after the other with a sufficiently rapid frame rate that they appear simultaneously present to the human eye. The LCD and how it is backlit by the DBLU control what is seen at the different viewing positions (a prerequisite for an autostereoscopic image). Clever choice of the ‘master’ image displayed by the LCD and what portions of it are visible (controlled by the DBLU, as only LCD pixels backlit from the viewer's position are visible) produces an autostereoscopic image. If the overall refresh rate is insufficient (below 50–60Hz), the image brightness will visibly fluctuate, giving rise to an unpleasant flicker.

To reduce this flicker, colleagues and I previously proposed using dot dithering. This technique divides the spatially overlapping subimages into dot-shaped regions. Each region is formed by light from a different path and is intended to be viewed from a different viewing point. This prevents fluctuations in the luminance (i.e., flickering) from being noticed by the human visual system by reducing the required overall refresh rate for each viewpoint in a time-sequential 3D display. However, in the side lobes (regions either side of the center, each with four viewpoints), the image data and light paths from the DBLU do not match and the image is distorted (see Figure 1, where we illustrate this using A, B, C, and D to represent portions of the image that should be visible from left to right from each viewing position).4 As can be seen, with dot dithering, the image in the left lobe has these portions visible in the wrong order, distorting the image. More people could view the same autostereoscopic 3D image simultaneously if we could improve image quality at the side lobes. 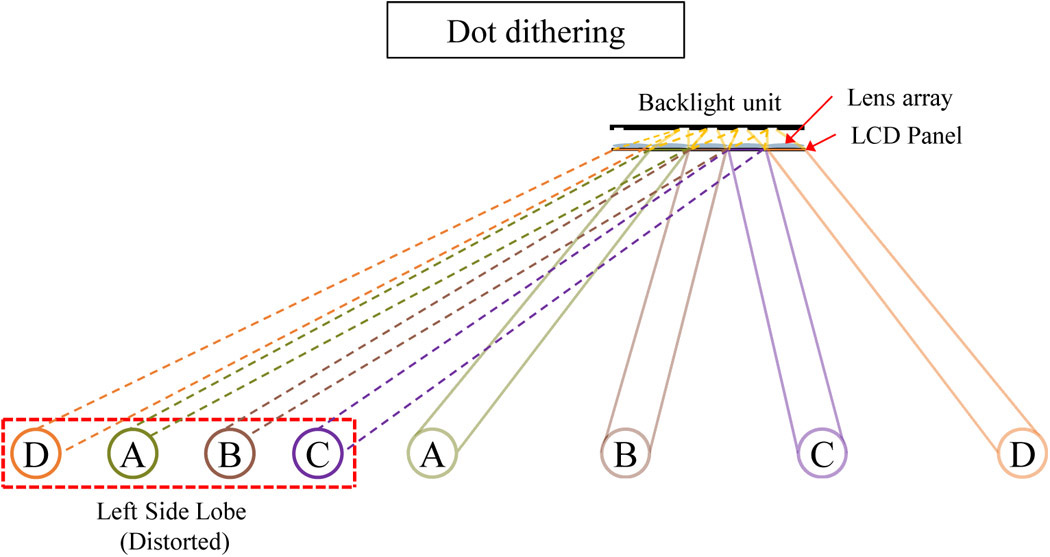 Figure 1. With dot dithering, a mismatch between the image data and paths of light emitted from the directional backlight unit (DBLU) for each dot distorts the image in the side lobes. Instead of the correct ‘ABCD’ sequence of images, a distorted sequence of ‘DABC’ is shown.

We arrange the image data in the LCD panel and the DBLU light paths for continuity in the horizontal direction (see Figure 2). In our experiments, for each viewpoint, the observed image is composed of four sequential sets of four spatially overlapping subimages. For the viewer to observe the complete 3D image, a sufficiently high refresh rate is needed to induce afterimages in the human visual system such that the sequential sets of subimages appear blended together. Four different 3D images are shown at four viewpoints with full high-definition resolution using a 120Hz LCD display with a DBLU module. Our system displays the entire 3D image with an overall refresh rate of 30Hz. 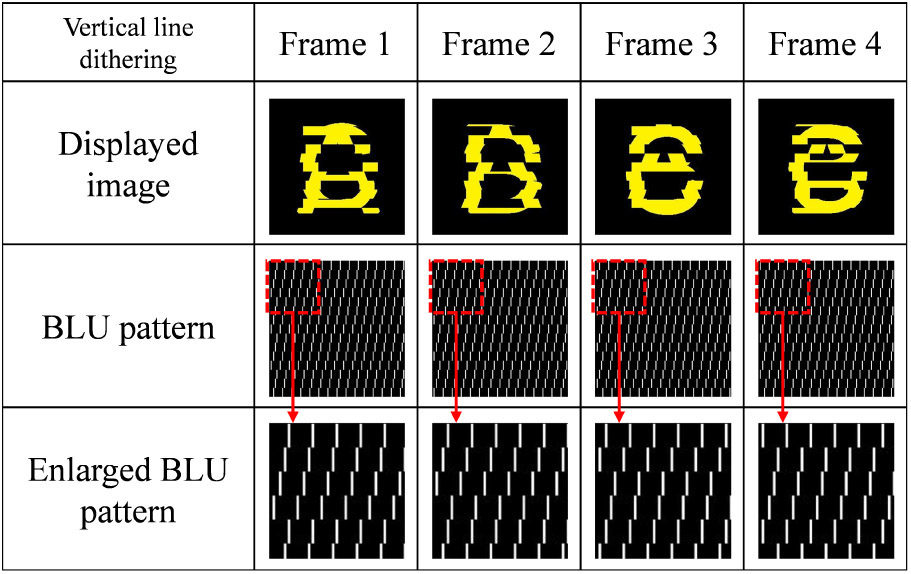 Figure 2. Principles of the proposed vertical line dithering method. The backlight unit (BLU) is composed of a lens array and backlit pattern. In each BLU pattern, the white bars represent optical sources (line sources). Lenses and the relative positions of the LCD and the optical sources control which LCD pixels are visible from different viewpoints.

Figure 3. Comparison of the images displayed at the different viewpoints numbered from 1 to 4 from left to right—for each of the left side lobe and central lobe as shown in Figure 1—as they appear using the conventional time-sequential method with either dot dithering or vertical line dithering. (Only two viewpoints are shown for each side lobe, rather than four, because of space restrictions.)
Hee-Jin Choi
Sejong University
Seoul, South Korea

Hee-Jin Choi received his PhD in electrical engineering and computer science in 2008 from Seoul National University, Korea. In 2010, he joined the faculty of the Department of Physics, Sejong University, Korea.